The last time it was so warm, Australia was in the grip of toilet paper fever.

It was March 19 and the pubs were still open. So was the international border. Masks seemed absurd and pandemic-wary Melburnians were still outside soaking up 30 degrees and plenty of sunshine. 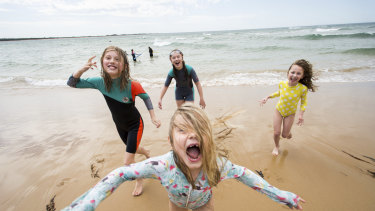 The day earlier, Scott Morrison announced indoor gatherings of more than 100 people were banned and pleaded for us to "Stop hoarding. I can't be more blunt about it."

So much worse was to come.

It has been a dark pandemic winter and Melburnians, itching for freedom, sun and mates, were not about to let Saturday's 29.2 degrees pass them by.

Thousands spread through the city's parks and beaches on Saturday, as Chief Heath Officer Brett Sutton urged people to "Hold. The. Line."

"Don’t risk everything," he tweeted after seeing footage on Friday of a large gathering of partiers swarming an unsuspecting television reporter and kissing him on the face.

"What we can hold back now means a truly normal summer." 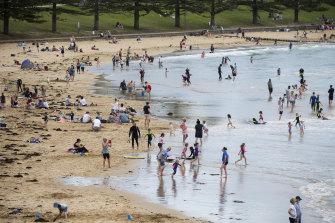 News vision showed dozens of people dancing and someone trying to cover the camera.

The Age visited several social hot spots on Saturday afternoon, including Queenscliff, Torquay and Sorrento, and found most people doing the right thing.

They were many, but the groups were generally twos, threes or fours and spaced several metres from the nearest picnickers or sunbather.

At the grassy area by St Kilda beach, the scene of Friday's impromptu party, groups were contained in the peculiar "physical-distancing circles" painted on the ground.

Dozens of police, including some on horseback, moved through the crowd and along the boardwalk stopping and chatting to groups. Victoria Police would not say how many fines, if any at all, had been issued for the afternoon.

At Edinburgh Gardens in Fitzroy, space for a picnic blanket was at a premium. Groups snacked and sipped on booze, meaning most masks were tucked under chins or sitting on the grass.

For some, it would have been the first contact with a friend or friends for months.

"It's always busy, but not like this. Not this many people," said Jenna, a 31-year-old nurse. 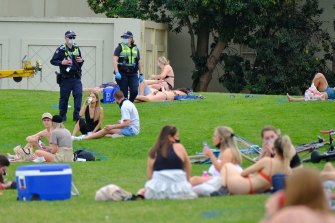 Her friend on the rug, Steph, also 31, said most people seemed to be following the rules and groups were keeping their distance. "I think people are being respectful," she said. "Everyone's wearing a mask if they're not eating or drinking."

Current restrictions only allow for outdoor gatherings of five people and from a maximum of two households. Ten will be allowed to meet outside, hopefully, by October 18 or 19.

Though a minority at Edinburgh Gardens, for some the horse appears to have bolted. A handful of friends tried to get around the restrictions by distancing their distinct groups metres away and chatting over the small green gulf.

Others were more brazen, and groups of sevens or eights were easy to spot and comfortable in the absence of police, most of whom appeared to be at St Kilda beach or guarding previous protest sites.

One woman joyfully joined a group already at its maximum capacity and proceeded to move around the circle giving hugs and kisses: "Long time no see," she said.

03/10/2020 World News Comments Off on ‘Long time no see’: Soaking up the sun on the warmest day since ‘it’ all began
Lifestyle