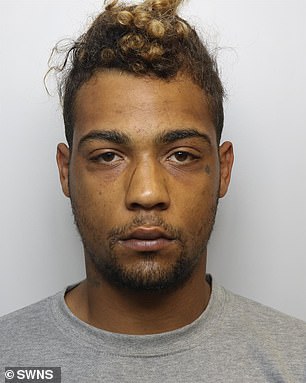 Dane Lyons, 26, from Leeds, turned up to his former partner’s home brandishing a machete the day before she gave birth

A father armed with a machete who attacked his heavily pregnant ex-girlfriend and told her he hoped their baby was stillborn has been jailed.

Dane Lyons, 26, from Leeds, went to his former partner’s home on April 12 this year, the day before she was due to be induced with his first child.

The victim, who was home with her eight-year-old daughter, was slapped around the face three times.

During the assault, she noticed the machete and, knowing Lyons was violent, threw it into a neighbour’s garden.

Lyons went to retrieve the machete and the victim locked the doors.

The defendant then damaged the doors and windows and fled the scene before police arrived.

The incident followed a number of threats made by Lyons since the two-year relationship ended at the start of 2019.

On February 24, Lyons called the victim and threatened to burn her house down if their baby was not stillborn.

He said: ‘I hope your baby is born dead, if it isn’t I will set fire to your house with you and your two kids in it.’

On March 1, he told her he would smash her windows and her mother’s windows.

The victim took the threats seriously.

Prosecutor Bashir Ahmed told the court it was a ‘toxic’ relationship in which she experienced constant harassment and a catalogue of assaults.

Lyons turned up at the victim’s house again intoxicated just days after the victim had given birth, on April 15.

He was then arrested and released on bail under the condition he would attend a Class A drug assessment test.

He did not attend and was remanded in custody.

Lyons pleaded guilty to criminal damage, two counts of making a threat to damage or destroy property, common assault and failure to attend a Class A drug assessment test at the Magistrates.

After a trial, he was found guilty before the Magistrates Court on August 27 of possession of a bladed article in a public place. 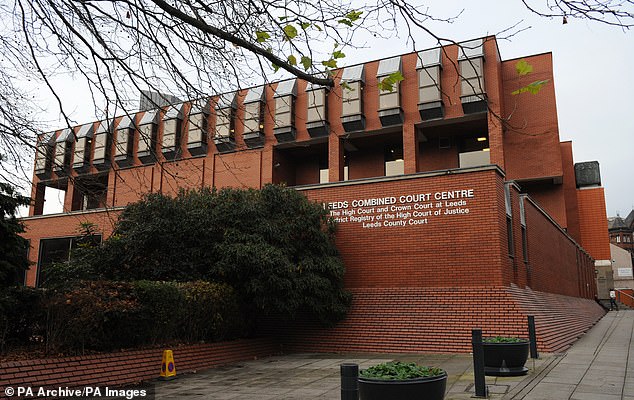 Lyons has 26 previous convictions including robberies, battery, assaulting a police officer and possession of cocaine.

Richard Reed, mitigating, said the defendant had started a new relationship with another woman at the start of the year.

Mr Reed said Lyons was now drug-free and expecting a second child with his new partner.

He said: ‘He accepts that he has behaved extremely poorly but they were spur of the moment, impulsive threats with no intention that they would be carried out.

‘It is fair to say he brought the machete but he did not take it out and threaten her with it.’

Sentencing Lyons to three years in prison at Leeds Crown Court, Judge Tom Bayliss QC said: ‘The stress of all this, the indignity of this in her own home, by the man she presumably loves is hard to imagine.

‘The stress when she was carrying your child must have been intense.’

The victim was granted a restraining order.