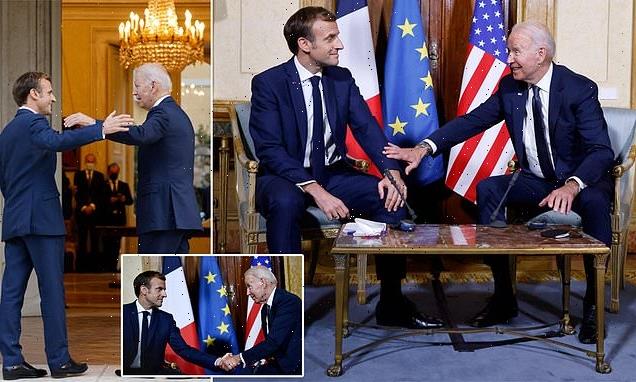 French diss? Macron declares that ‘trust is like love’ and depends on PROOF after Biden all but apologizes for submarine snub and claims the French president WAS told about controversial deal in advance

President Joe Biden did his best to rekindle the bromance with Emmanuel Macron on Friday but the French president offered a cool response as he suggested the U.S. might have to do more to repair wounded relations.

‘We are building the trust again,’ he told French reporters after the meeting, according to the Associated Press.

‘Trust is like love, declarations are good, but proof is better.’

A rather more poetic version of ‘trust but verify.’

In public they had smiled, wrapped their arms around each other and showed the world things were on the mend after France’s fury at the AUKUS pact and losing a submarine deal.

But Macron’s rather Gallic response – sounding for all the world like a jilted French lover wondering if he can ever trust again – may mean Biden will have to deliver actions and not just warm words.

And at one point in their meeting, Macron looked down stiffly at Biden as the U.S. president reached across to touch his arm in a show of bonhomie.

After their meeting at the French embassy in Rome, Biden admitted that Washington had handled things in a ‘clumsy’ way.

‘I want to be clear: France is an extremely valuable partner,’ Biden said.

He shrugged off a question about whether he needed to apologize to Macron, saying they ‘already talked’ but he did offer concessions to his French counterpart.

President Emanuel Macron said: ‘Trust is like love, declarations are good, but proof is better,’ after meeting with President Joe Biden in Rome

‘I was under the impression that France had been informed long before that the deal was not coming through,’ he says of thwarted submarine deal that caused so much French fury that Paris recalled its ambassadors to the United States and Australia.

‘I think what happened was – to use an English phrase – what we did was clumsy, not done with a lot of grace. I was under the impression that certain things had happened that hadn’t happened,’ Biden conceded.

‘I honest to God did not know you had not been [informed],’ he told Macron.

‘I don’t worry at all about instability or drift in the us-France relationship,’ said the official.

The two also issued a lengthy joint statement outlining areas of cooperation such as the Indo-Pacific and technical assistance.

‘The United States and France intend to intensify cooperation on space issues, which will be further discussed during Vice President Harris’ upcoming visit to Paris,’ it said.

Macron said they were on the path to repairing Franco-American relations.

‘This is very much the beginning of a process of trust, of confidence which we’re building together,’ he said.

‘We clarified together what we had to clarify’ Macron said. ‘Now what’s important is to be sure that such a situation will not be possible for our future.’

‘This is an extremely important clarification,’ he added. ‘What really matters now is what we will do together in the coming weeks, the coming months, the coming years.’

Biden and Macron shook hands and appeared to be on the path of repairing U.S.-Franco relations

The two men waved for the cameras, smiled, wrapped their arms around each other and grasped hands

The kumbaya meeting with Macron was part of Biden’s  make-up campaign to the French.

The two leaders met at the Villa Bonaparte, the French embassy to the Vatican situated in the heart of Rome. Their sit down comes ahead of their attendance at the G20 summit this weekend.

The Villa was originally the home of Napoleon Bonaparte’s sister Pauline, who had a bathtub carved out of the marble installed so she could bath in donkey milk, which she believed would help keep her looking young. It became an embassy in 1945.

Biden held two phone calls with Macron in the lead up to Friday afternoon’s meeting, which could be one of his more awkward sit downs in his five-day Europe trip.

The White House is making an all out effort to emphasis the importance of its relationship with France, the United States’ oldest diplomatic ally.

Jill Biden separately hosted a sit down with French first lady Brigitte Macron on Friday evening at a cafe in Rome while their husbands had their meet-and-greet.

‘It was wonderful,’ Biden said of the meeting with her French counterpart. ‘It’s nice, two friends together, just like sisters.’

President Biden held two phone calls with Macron ahead of the sit down, including one in September as shown above

The United States has embarked on a wooing campaign of France after the French anger over AUKUS, a deal with the U.S., Australia and Britain that resulted in Australia buying American nuclear subs instead of diesel ones from the French.

White House officials said Biden has not formally apologized to Macron, according to press secretary Jen Psaki, but ‘he acknowledged that there could have been greater consultation’ ahead of the deal announcement, she noted.

The French recalled their ambassador to the United States in the fallout although Philippe Étienne eventually returned to his U.S. post.

‘We feel very good about the intensive engagement that we’ve had with France over the course of the past few weeks,’ Sullivan told reporters on Thursday.

He said he expects the two leaders to have a ‘constructive and deeply substantive meeting; where they will discuss counterterrorism and the Indo-Pacific along with energy and technology issues.

The Indo-Pacific conversation is of particular importance to the French after the submarine deal, which saw a shift in political alliances in the region.

France is especially angry over being kept in the dark about that situation since it has major interests in the Indo-Pacific, where France has territories with 2 million people and 7,000 troops.

The French were outraged in September about the AUKUS deal with one diplomat claiming the US ‘stabbed’ France in the back.  Paris lost a  $90 billion submarine deal with Australia in the fallout of the new agreement.

The White House claimed they thought Australia was keeping the French in the loop about what was going on.

The AUKUS deal is part of American moves to counter China’s growing power in the Pacific region.

The White House is making an all out effort to emphasis the importance of its relationship with France, the United States’ oldest diplomatic ally – above Macron and Biden at the G7 in June

As part of the deal, Britain and the U.S. agreed to provide Australia with nuclear submarine technology, largely-viewed as an effort to counter Chinese expansion in the South China Sea where it lays claim to several disputed islands.

Australia will get its hands on eight nuclear-powered submarines which will likely cost less than the $7.5billion-per vessel that France was offering for conventional diesel-electric submarines. While the exact design and costs of Australia’s subs have yet to be revealed, US Virginia-class nuclear subs cost around $4.5bn each and UK Astute-class $2.6bn each.

At the time the deal was announced, the French foreign minister said the deal was something Donald Trump would do.

‘This brutal, unilateral and unpredictable decision reminds me a lot of what Mr. Trump used to do,’ Jean-Yves Le Drian told franceinfo radio. ‘I am angry and bitter. This isn’t done between allies.’