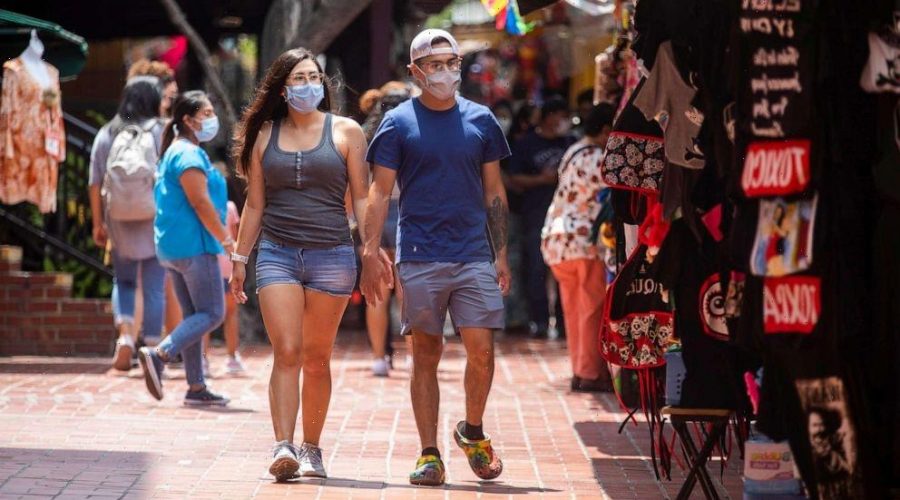 As the delta variant drives a surge in COVID-19 cases across the U.S., some local health departments are taking the lead to reimpose indoor mask mandates for all residents — despite CDC guidance that most fully vaccinated Americans can go maskless.

The move from local municipalities in several states, including Massachusetts and Nevada, follows the announcement earlier this month by Los Angeles County — the most populous county in the nation — that it would reinstate mandatory indoor masks after seeing an uptick in coronavirus cases and hospitalizations.

The CDC said in May that fully vaccinated Americans could go without masks — but that was before the delta variant dramatically changed the landscape of the pandemic.

Vaccines are still working, experts say. But the highly transmissible delta variant means that cases are once again surging — especially among the one-half of all Americans who are not yet fully vaccinated. Over the past few weeks, coronavirus cases and hospitalizations among unvaccinated people in nearly every state have been on the rise, just as some states were in the process of declaring an end of their state of emergency from the pandemic.

ABC News identified at least a dozen states that have seen a reversal of their mask guidance at the local level — from cities, counties and school districts — in the past couple weeks. Some of these efforts have received solid support from state government, while some others are being challenged by state officials.

In California, while the new mask mandate has only been issued in Los Angeles County, at least ten additional counties across the state are now strongly recommending indoor mask-wearing for all residents — including those who are fully vaccinated. In Massachusetts, several counties and municipalities have brought back mask mandates.

In the cities of Las Vegas and New Orleans, health officials have moved to implement masks for county employees regardless of their vaccination status. Savannah became the first major city in Georgia to reinstate an indoor masks policy for all residents in response to a spike in coronavirus cases in the surrounding counties.

“It’s clear to us we’re on a very dangerous trend,” Savannah Mayor Van Johnson said on Monday. “And in order to try to slow this trend down, the mask mandate was the least invasive and destructive way to do it.

In some states, efforts to bring back mask requirements have faced immediate pushback.

In Missouri, as the case rate has increased and the vaccination rate remains low, St. Louis city and county officials announced last week that they will require masks to be worn in indoor public places and on public transportation — but state Attorney General Eric Schmitt said that he will be filing a lawsuit to stop the city and the county from bringing back such a mandate.

In Florida, where hospitalizations in some areas are increasing at the fastest rate since the start of the pandemic, Palm Beach officials this week went against Gov. Ron DeSantis’ statewide ban on mask mandates by imposing an indoor mask mandate for residents regardless of vaccination status.

And Miami Dade and Orange counties, while stopping short of imposing a mandate, have brought back recommendations to wear masks in crowded areas, prompting DeSantis to warn Orange County that it “cannot impose civil or criminal penalties on citizens who choose not to wear masks.”

In Montana, Missoula County’s health officer has blamed the state ban for the county’s inability to bring back a mask mandate despite a rise in cases.

And in Texas, many lawmakers and health officials are urging Gov. Greg Abbott to reverse his school ban and allow mask mandates in schools to be reinstated.

“We now know that even vaccinated people can catch and spread coronavirus,” 31 Texas lawmakers wrote in a letter to Abbott on Friday. “Under these circumstances, we must continue to fight against this virus with all the tools at our disposal.”

Some local school districts in Atlanta, Ohio, Michigan and Illinois have announced various mask mandates for school students and staff members, regardless of vaccine status, for the fall semester.

Officials in other states including Pennsylvania, Kansas and New York are focusing on increasing the number of vaccinations instead of reconsidering their mask guidance.

On Monday, New York City Mayor Bill de Blasio announced that the entire city workforce will be mandated to either get vaccinated or get tested once per week in response to rising coronavirus cases in the state.

“The CDC agrees with that ability and discretion to say, you know, you’re in a situation where we’re having a lot of dynamics of infection,” Fauci said of the local mask mandates. “Even if you are vaccinated, you should wear a mask. That’s a local decision that’s not incompatible with the CDC’s overall recommendations that give a lot of discretion to the locals.”