Matt Hancock today conceded that a completely normal Christmas is impossible this year.

The Health Secretary admitted it was unlikely a Covid vaccine would be rolled out before early next year as he said that ‘as close to normal as possible’ was the best that could be hoped for during the festive period.

And he used a grilling by Philip Schofield and Holly Willoughby on This Morning to warn even that would be dependent on rules being followed now to crush an up-spike in coronavirus cases.

‘I know that is what so many people are looking forward to. It is what I hope for, for my family, and I just hope that we can get there. It means taking decisions now.’ 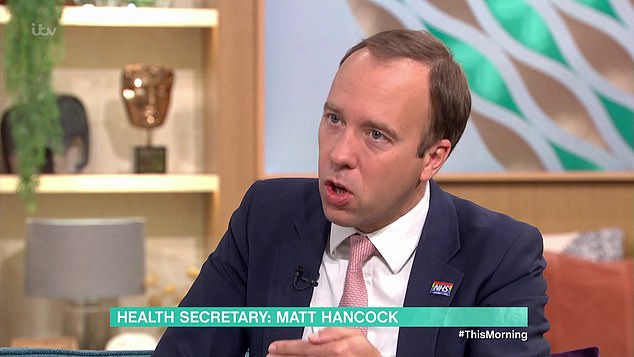 The Health Secretary admitted it was unlikely a Covid vaccine would be rolled out before early next year as he said that ‘as close to normal as possible’ was the best that could be hoped for during the festive period. 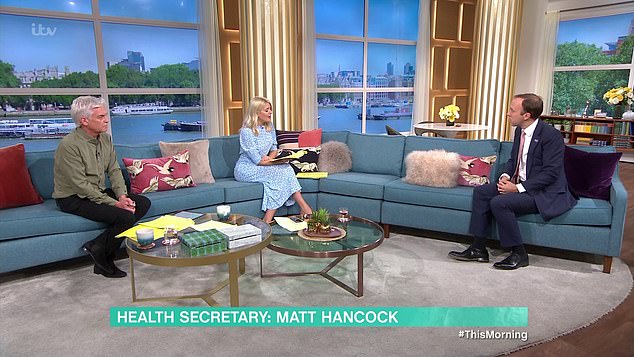 And he added: ‘If this runs out of control now we will have to take heavier measures in the future.’

On the possibility of a vaccine, Mr Hancock said: ‘For the mass rollout we’re talking about the first bit of next year, if all goes well.

‘Hopefully in the first few months – there’s still a chance of it coming on stream before Christmas, but we’ve then got to roll it out and the first people who will get it are the people who are most vulnerable – people in care homes, older people.

‘There’s a series of different vaccines, but we are talking about – essentially, for it to have an impact on how we live our lives – we’re talking about the start of next year.’

It came as Professor Chris Whitty and Sir Patrick Vallance prepared to warn the UK is at a ‘critical point’ in the fight against coronavirus after a surge in cases as Boris Johnson faces a Cabinet war over reimposing lockdown measures.

The Chief Medical Officer and the Chief Scientific Adviser will deliver a stark televised address to the nation this morning, with Prof Whitty expected to say that the UK is facing a ‘very challenging winter’.

He will say Britain is currently heading in ‘the wrong direction’ with Government sources warning the UK is now in the ‘last chance saloon’.

Mr Johnson held talks with Prof Whitty and Sir Patrick yesterday as he draws up a virus battle plan that could see the country face more draconian restrictions for as long as six months.

The fact Mr Johnson’s two top scientists are addressing the nation today will likely be seen as an attempt by the Government to ‘roll the pitch’ for the PM to announce new restrictions.

It is thought Mr Johnson will set out new measures in a press conference as early as tomorrow and Health Secretary Matt Hancock today refused to guarantee that pubs will still be allowed to open at the weekend as he said it is socialising which is driving the spike in cases.