Premier Daniel Andrews is facing calls to lift Melbourne’s controversial COVID-19 curfew after confirming the decision to impose a night-time stay-at-home direction was introduced only to make it easier for police to enforce the general lockdown.

Mr Andrews confirmed earlier comments from the state's Chief Health Officer Brett Sutton that the curfew decision was not based on his advice, nor that of health officials. 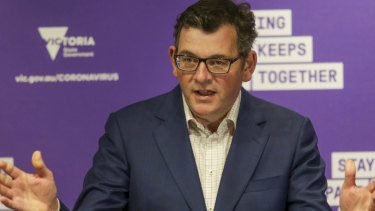 The state opposition seized on the comments, calling the curfew a "captain’s call" by the Premier and demanding it be lifted immediately.

As the state recorded 76 coronavirus cases on Wednesday and another 11 lives lost to the disease, Victoria remained on track, according to a leading epidemiologist, to narrowly hit the caseload target set by Mr Andrews’ government as a condition for easing the present restrictions.

Mr Andrews was defiant in his defence of the curfew, saying decisions were "ultimately made by me".

"It's not a matter for Brett [Sutton], that's not health advice, that’s about achieving a health outcome. His advice is 'do whatever you can to limit movement'. Police then say 'we need rules we can enforce'. These are decisions ultimately made by me."

"What it means is no one’s sneaking out going to their mate’s place," Mr Andrews said.

"No one’s going and doing things that they are by law not allowed to do.

"So it hasn't changed the rules. The rules, that is, the reasons you can leave, are all the same.

"It just makes the job of police much, much easier."

Associate Professor Adam Kamradt-Scott, a public health expert from Sydney University, said curfews could sometimes backfire if they encouraged large numbers of people to congregate at shops or other businesses just before they were forced to close each evening.

He said another approach would be to extend the operating hours of businesses and enforce times that certain suburbs or streets go shopping.

“The danger associated with introducing a curfew is shortly before that time, people realise they need to do things, so they may turn up to the shops and find 1000 other people have also had the same dilemma," he said.

“At least previously in Australia’s pandemic plans we were doing the opposite, we would look to extend business operation hours and spread people’s risk of infection. A curfew would do the exact reverse of that, which is risk consolidating people in high numbers at specific locations.”

But Mr Kamradt-Scott said the curfew approach had recently been adopted by Israel in its fight against COVID-19, and it had proven proved effective in helping bring ebola under control in Sierra Leone.

Victorian Liberals Leader Michael O’Brien accused Mr Andrews of making a captain’s call that was not based on health advice.

"It wasn’t a Brett Sutton call, it wasn’t a medical evidence call, it was a captain’s call by the Premier who wanted to keep Melbourne in curfew," he said.

Mr O'Brien said it was unfair for Victorians to be unable to walk their dog at 8.30pm, for example, without health advice.

"The curfew should go," Mr O’Brien said. "When you consider how extreme a curfew is – in wartime we haven’t been subject to a curfew.

"This is an extraordinary infringement on the rights of the people of the state and for the Premier to do it without any medical advice, without any scientific advice, to make a captain’s call, shows you that the power has gone to this bloke’s head and frankly, we deserve better than that."

Dr Stephen Duckett from the Grattan Institute, writing in an opinion piece for The Age, said the curfew did not appear to be evidence-based.

Dr Duckett is otherwise a supporter of the government's plans for the phased rollback of restrictions and has called on the Premier to aim for elimination of COVID-19.

"Some of the restrictions are irritating – why keep the curfew? It doesn't appear to be evidence-based and it gives the Prime Minister yet another opportunity to display his antagonism to Victoria and Victorians," he wrote.

Victoria Police was asked on Wednesday if it pushed for the curfew to be included in the rules of stage four lockdown, but the force declined to comment.

“Victoria Police has no comment to make on the directions made by the Chief Health Officer," a spokesperson said.

Despite the daily number of COVID-19 diagnoses rising on Wednesday, the all-important 14-day average case count for the Melbourne region continued to fall, down to to 74.5.

For regional Victoria the 14-day average is five cases per day.

Under the state's government road map to reopening, the Melbourne region will move to its next step on September 28 if the 14-day average for new cases is between 30 and 50.

Deakin University epidemiology chair Catherine Bennett said it would be tight but Melbourne was still on track to meet this target if the present trend in daily case numbers continued.

In other developments on Wednesday, the state government confirmed 25 sewage sites around Victoria were being regularly tested for traces of coronavirus, including 14 in regional areas, after traces of COVID-19 were found in waste water in Apollo Bay last week.

The search for Apollo Bay’s positive case continues, with none of about 60 people in the area who have been tested returning positive results.

“As the level of cases reduces, as the level of community transmission goes down, we need to be vigilant to look for the remaining cases out there and get to them as quickly as we possibly can,” he said.