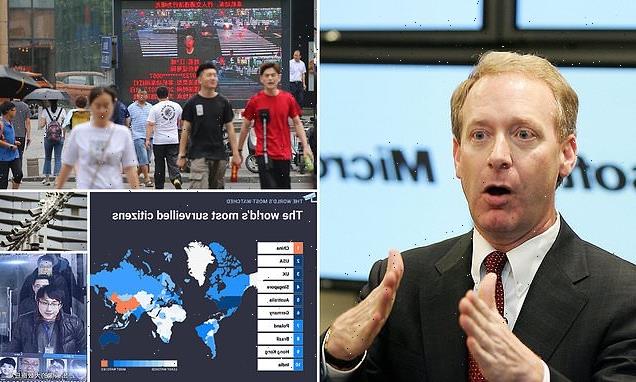 The president of Microsoft is warning society about adopting the kind of artificial intelligence once only imagined in science fiction dystopian novels.

Brad Smith referenced George Orwell’s seminal book ‘1984’ when discussing government’s increasing ability to monitor its citizens. Critics are particularly focused on China, which has ambitions of leading the world in artificial intelligence within the next decade. 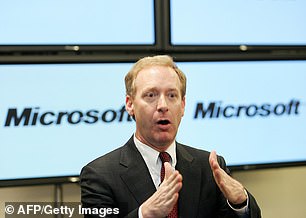 The president of Microsoft, Brad Smith, is sounding the alarm about society adopting the kind of artificial intelligence once only imagined in science fiction dystopian novels

In ‘1984,’ citizens live under the threat of constant surveillance and censorship, with cameras seemingly tracking their every move.

The government in the book cracks down on forms of individualism and rebellion. ‘Well, that didn’t come to pass in 1984, but if we’re not careful that could come to pass in 2024,’ Smith added.

China has said that it wants to become the greatest AI power in the world by 2030.

In 2019, China secured more patents than the United States for AI innovation at academic institutions. Additionally, China contains 54 percent of the world’s CCTV cameras, according to Comparitech. 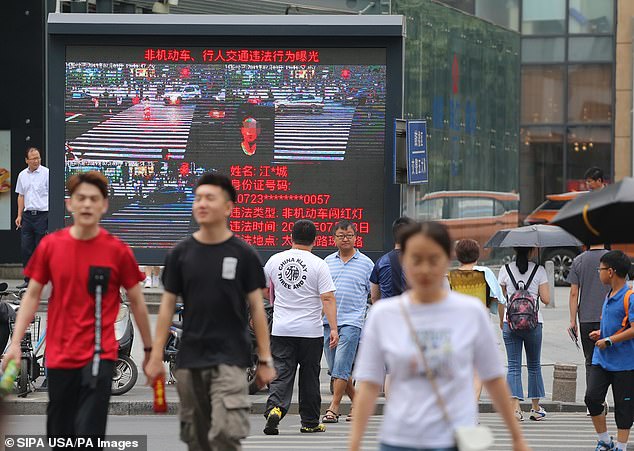 Pedestrians walk across a crossroad as a big electronic screen supported by face-recognition system shows the image of a jaywalker at the intersection in Nanjing, China

Smith further elaborated that he feared the capabilities of technology would surpass the human ability to control it.

‘If we don’t enact the laws that will protect the public in the future, we are going to find the technology racing ahead, and it’s going to be very difficult to catch up,’ Smith said.

China, meanwhile, has 15,880,491 CCTV cameras in places like Shanghai, equal to a camera for every man, woman and child.

The U.S. ranks as the second most surveilled country in the world, behind China and ahead of the United Kingdom, Singapore and Australia, respectively.

The report was conducted by WebsiteToolTester, which reviews website-building platforms like Winx and Squarespace.

Of the 150 cities analyzed in the report, 18 of the top 20 most surveilled cities were in China.

The chair of the US National Security Commission on Artificial Intelligence is also sounding alarms, stating that the United States needs to beat China in terms of artificial intelligence capabilities.

The NSCAI was established in 2018 to ‘consider the methods and means necessary to advance the development of artificial intelligence, machine learning, and associated technologies to comprehensively address the national security and defense needs of the United States.’

‘We’re in a geo-political strategic conflict with China,’ chair Eric Schmidt said. ‘The way to win is to marshal our resources together to have national and global strategies for the democracies to win in AI.’

The former Google chief executive added, ‘If we don’t, we’ll be looking at a future where other values will be imposed on us.’ 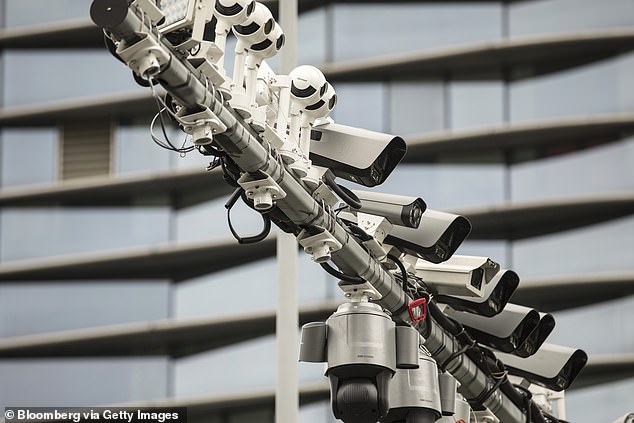 In ‘1984,’ surveillance cameras seemingly monitored all of the citizens’ actions

While cameras aren’t as ubiquitous in the United States, they can be found many places, including on the door of homeowners

Artificial intelligence is not unique to China, with the United States also taking steps toward AI innovations.

Google was involved in Project Maven, a military movement aiming to use machine learning to tell the difference between people and objects in drone video. 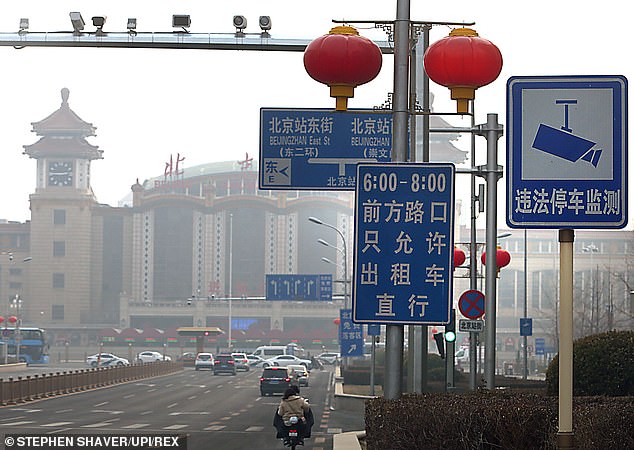 China is making inroads in the artificial intelligence race, which it hopes to lead by 2030 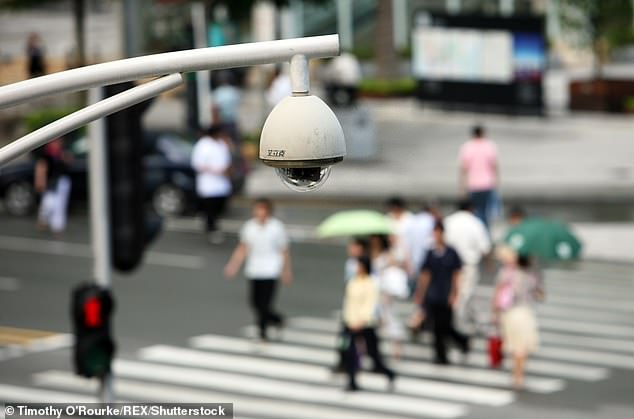 China also has the most CCTV cameras in the world, ranking as the most surveilled country

Machine learning is the ability for computers to use algorithms and data to teach themselves certain skills, such as facial recognition.

Many Google employees resigned, however, concerned about how the technology could be used in military action going forward to weaponize artificial intelligence in drone strikes and other attacks.

‘I kinda felt like I had blood on my hands,’ said software engineer Laura Nolan, who resigned in 2018.

Google withdrew from Project Maven in June 2018, a year after it launched in 2017 during the Donald Trump administration. The current status of Project Maven is unclear. 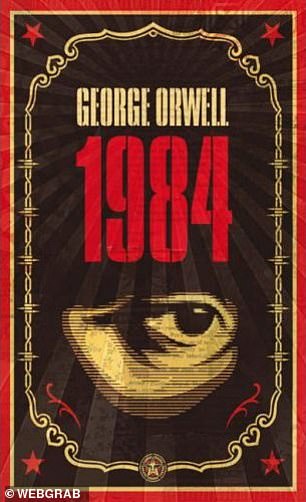 Americans remain concerned about the ability of government to collect data about them and their actions.

Surveys conducted by the Pew Research Center in 2019 show that 63 percent of Americans believe they can’t go through daily life without the government collecting their data.

Americans also believe that they lack control over that data, with a whopping 84 percent believing that.

Yet that didn’t mean Americans were opposed to data collection under certain circumstances.

Almost half of all Americans – 49 percent – find it acceptable for the government to collect data from citizens to help assess potential terroristic threats.

The U.S. government is busy keeping tabs on its citizens online: In 2019 alone it requested personal data from Facebook, Twitter, iPhones, Microsoft and Google on more than 800,000 Americans.

There are data protection laws in place to prevent the government from sharing aspects of the data that it collects.

But certain parts of the government collect information, such as the IRS, which has tax and employment information based on yearly filings.

The U.S. already is dealing with mass surveillance. 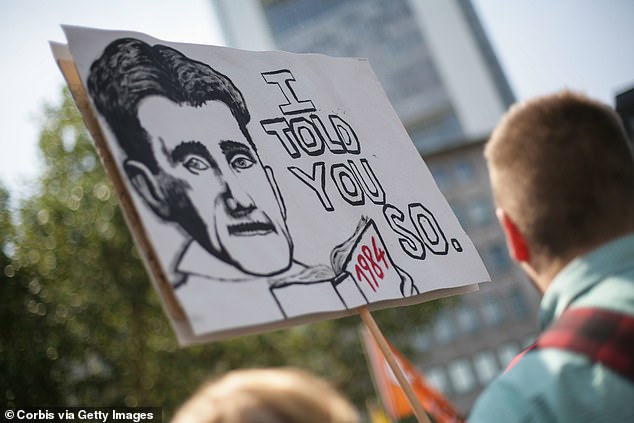 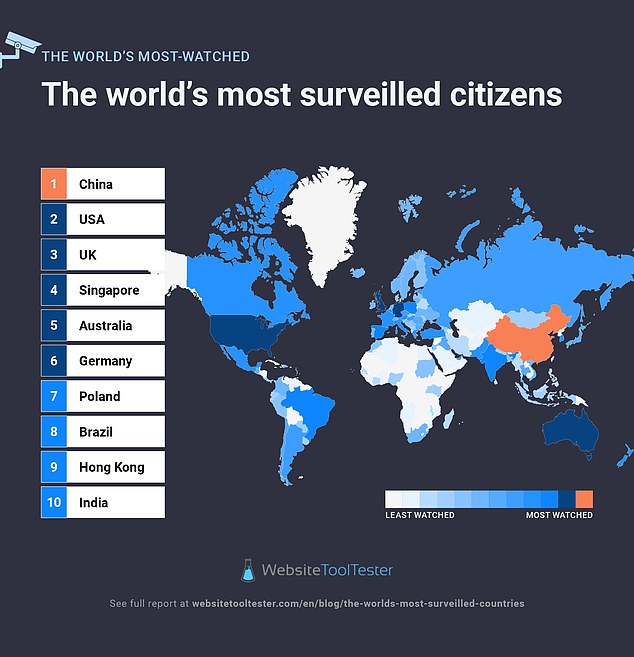 In a recent report, the United States ranked as the second-most surveilled country

There are also concerns that artificial intelligence could do permanent harm to the workforce.

In 2018, the World Economic Forum predicted that robots and artificial intelligence will eliminate 75 million jobs worldwide by 2022. 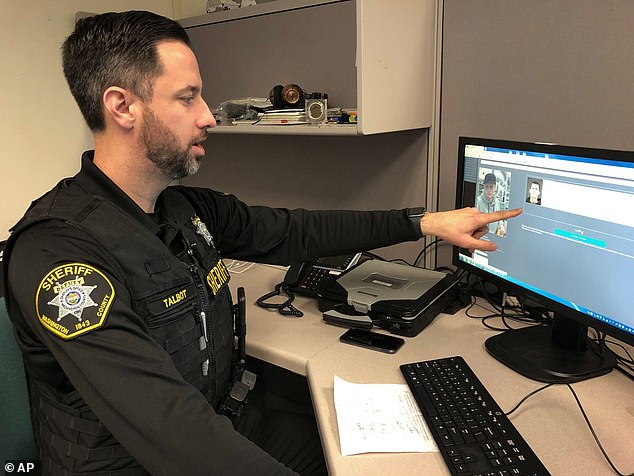 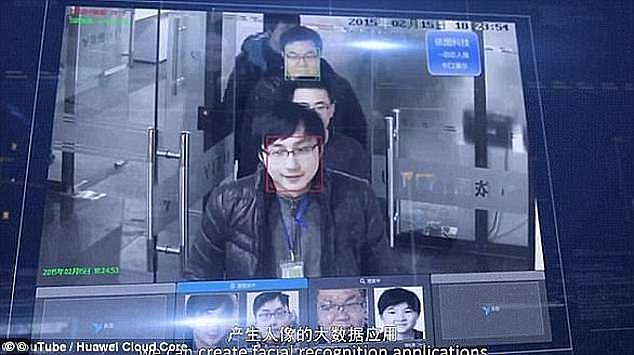 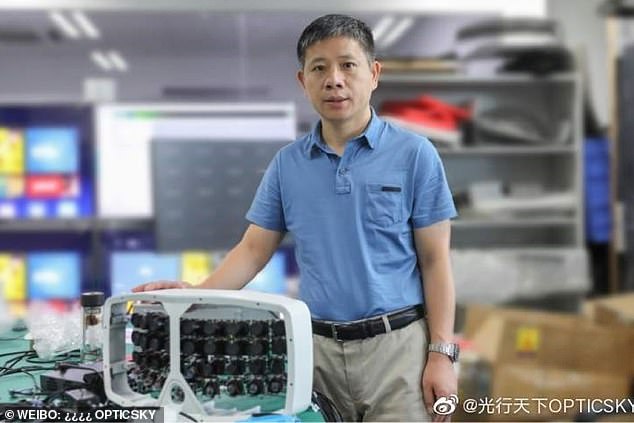 It also predicted that more than half of all workplace tasks could be done by machines by 2025.

Meanwhile, the march toward improved artificial intelligence continues as the Department of Defense is looking to work hand-in-hand with technology companies in Silicon Valley.

Seth Moulton, chair of the US Future of Defense Task Force, asked, ‘Are you going to help us win this race or are you going to essentially be against us?’

He added, ‘Could the AI arms race lead to conflict with China? Absolutely.’

At least one adviser to the government in China is looking to avoid conflict and instead work together with the U.S. ‘The US and China should really collaborate to prevent that from happening,’ Dr. Lan Xue said of potential conflict. ‘China does not seek to export its values.’