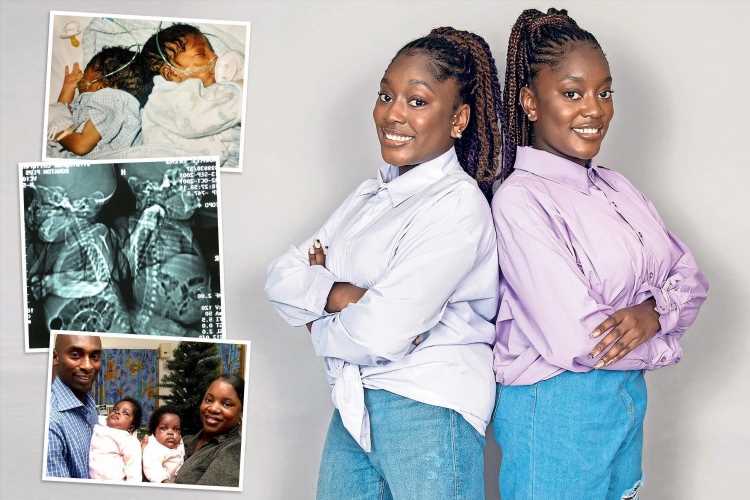 Even though they don’t remember the first three months of their lives, when they were conjoined at the base of their spines, somehow their bodies take comfort in recreating the position 20 years later. 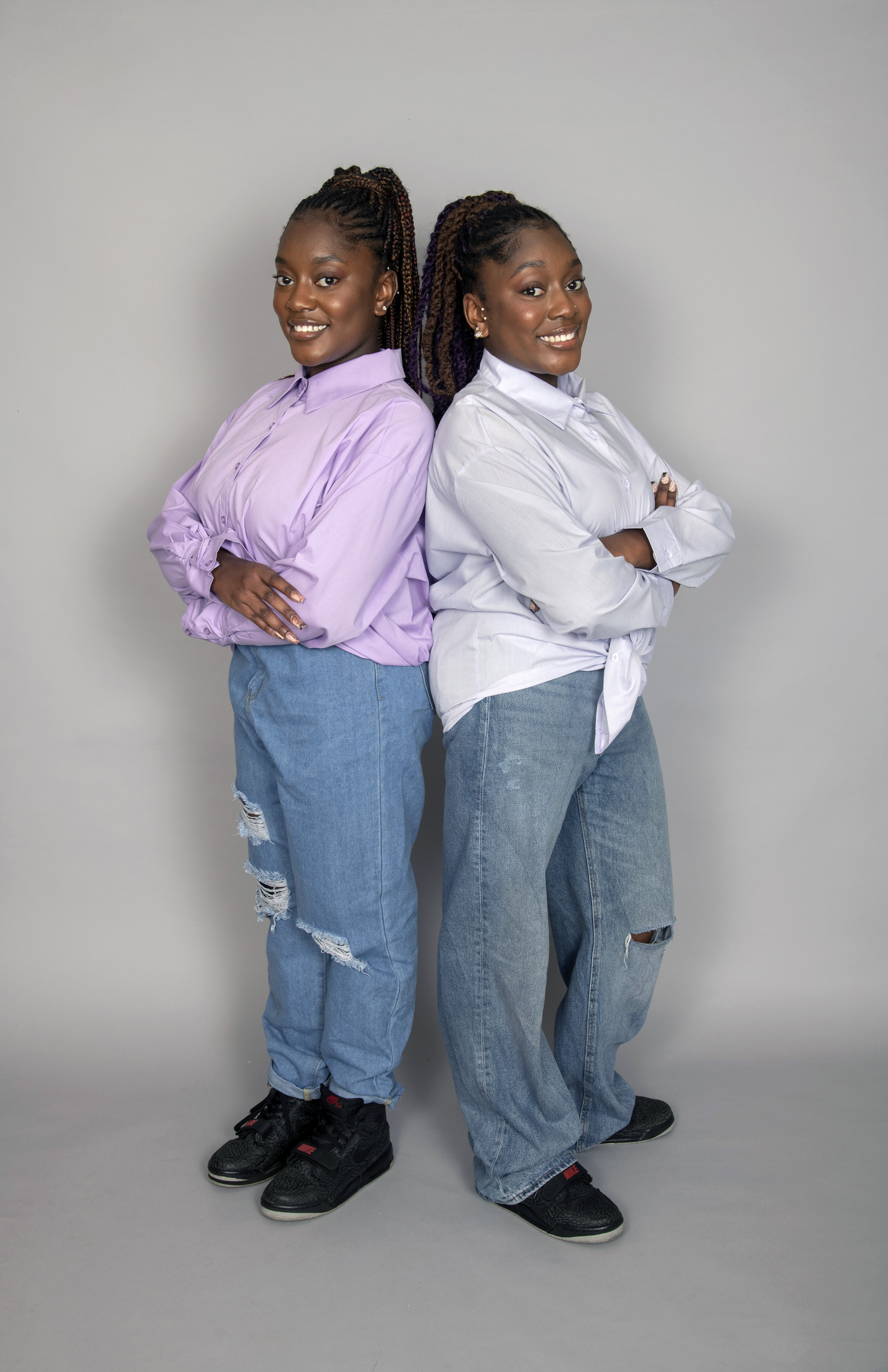 Eman said: “Even though we’re separated we are still very close. We sometimes sleep in the same position as when we were conjoined. We’re quite cuddly.”

Born four months prematurely on September 13, 2001, weighing just 10lb together, the girls were three months old when they had surgery to separate them at Birmingham Children’s Hospital, led by the late neurosurgeon Tony Hockley.

The pioneering 16-hour operation had never before been performed in the UK and only twice previously in the world.

Even though they had only a five to 25 per cent chance of surviving, and a risk of paralysis even if they did, the twins' parents Emma and David knew they wanted to go ahead.

Eman said: “Right from the start, our parents could see we wanted to be independent. If I had been given the choice at the time, I would have wanted to be separated.

“Naturally we’re quite different and we love being around each other all the time.” And Sanchia added: “When I look back on our lives, I’m very grateful to be separated from my twin.

“That might sound weird, but we’ve been allowed to have our own individual lives.”

The pair, who live at the family home with younger sister Damaris, 19, might be separated but they have stuck together through thick and thin.

They both love R&B, gospel and jazz and while they like to wear hoodies and trainers, they also enjoy dressing up for a night out.

Eman said: “Sanchia used to be the more outgoing, but I feel I’m the more extrovert one now. The biggest difference is I like to watch thrillers and sci-fi movies, but Sanchia loves chick flicks.

“Life would have been very different if we were still conjoined. We wouldn’t be able to go to different universities or be around different people.”

The girls, now 20, have spina bifida and each has a weak side of their body which causes back pain and problems walking. Eman sometimes uses a wheelchair or crutch to walk, while Sanchia also uses a crutch.

They can’t play certain sports and say being unable to go out as much during the pandemic has had repercussions on their physical health.

Eman said: “We each have one leg shorter than the other and one weaker side where we were joined. I get a lot of leg spasms. We’re used to it. When it’s bad, we say it’s just one of those days.”

They understand when the other is in pain, and when they need some extra support to get around.

But both have progressed far beyond their doctors’ expectations and are determined to live life to the full and inspire others with disabilities to do the same.

When Sanchia started walking aged two, with her sister following five weeks later, it was cause for celebration. Sanchia said: “They didn’t know if we were going to walk. When we did, people said it was a miracle. 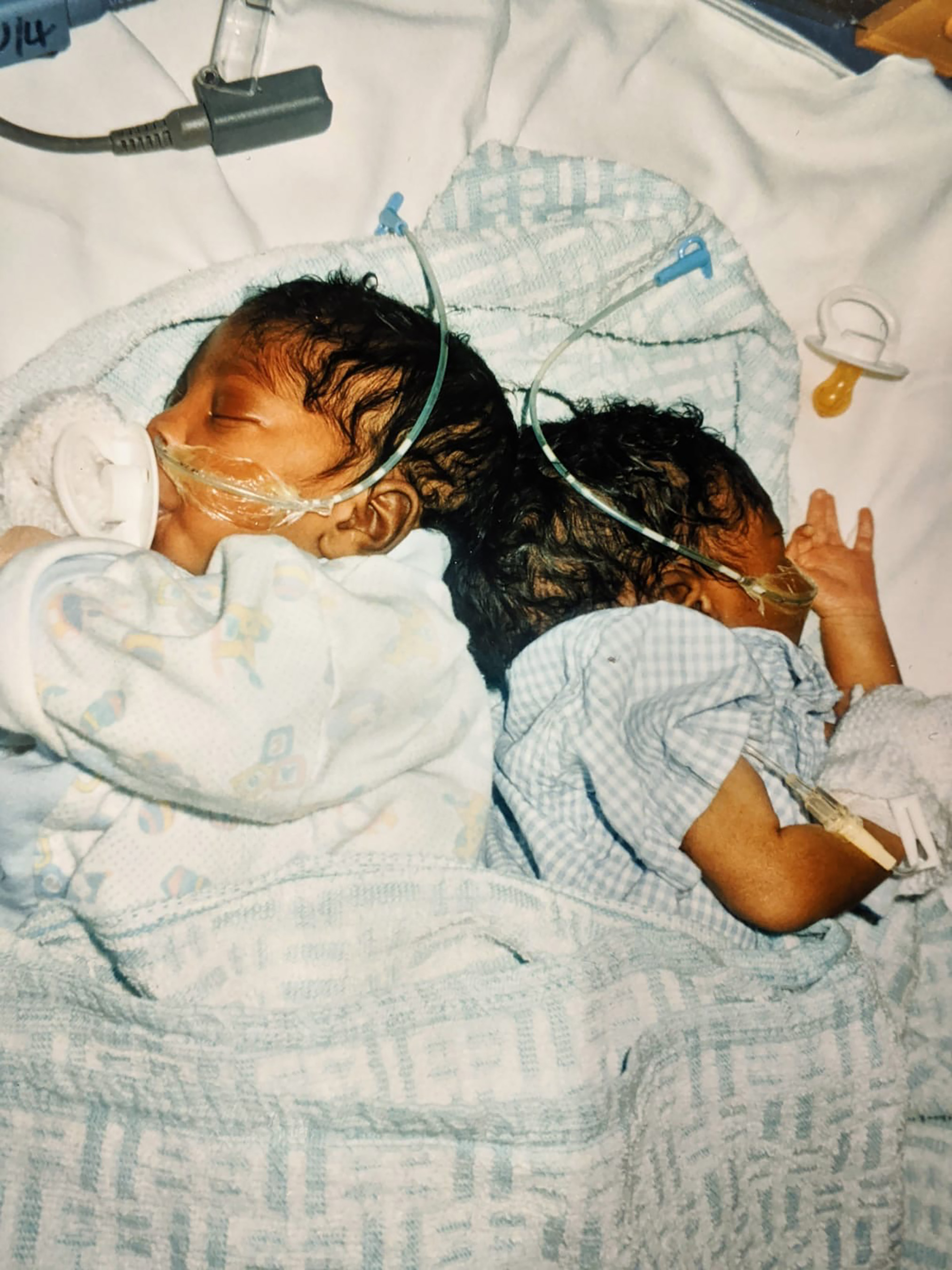 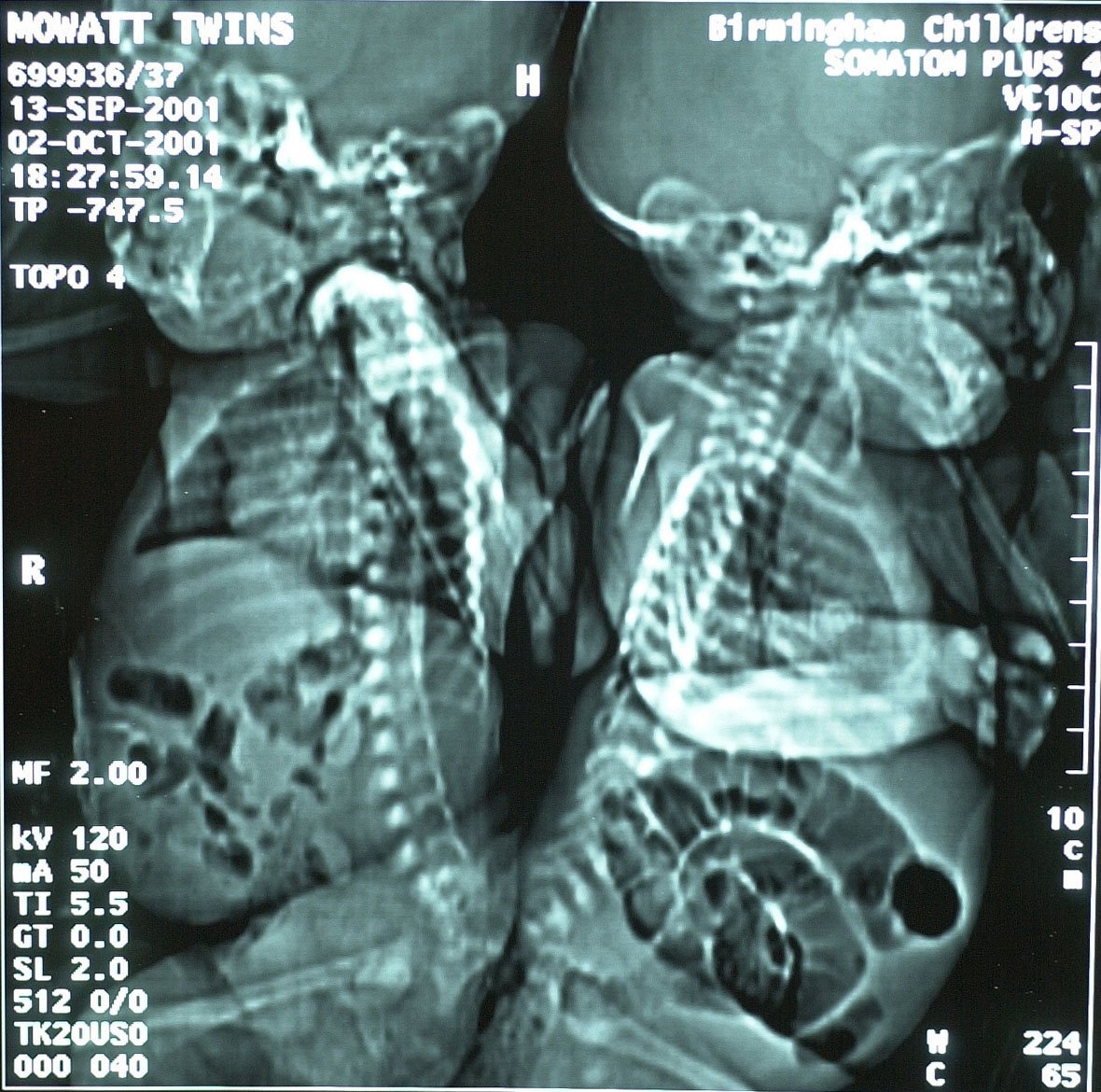 “We still have hospital appointments, we’ve had procedures and operations, but it’s amazing that we’ve come so far.”

Conjoined twins are very rare, making up an estimated one in 200,000 live births. They develop from one fertilised egg, so they are always identical, and about 70 per cent are female.

This month The Sun told how one-year-old twin girls who were joined at the back of their heads had been separated in Israel, enabling them to see each other for the first time.

The story has prompted Eman and Sanchia to talk to The Sun about their own experience. Sanchia said: “Seeing those pictures of the baby girls was so exciting. They’ve been separated at their heads and that’s amazing, that’s major.

“We’re excited for them because we know they can grow up having their own lives and still be close to their twin, but be individuals too.

“Stories like that give us a bit of humility because we think about what happened to us as babies and how far we’ve come.

“Even though there are side effects from the surgery, we have such gratitude and thankfulness to everyone who has helped us.”

The trio are all in their second year at university. Eman is studying politics and international relations, Sanchia has chosen cyber security and Damaris childhood, youth and educational studies.

There was a time, during their teenage years, when the twins preferred not to talk about their amazing story.

Eman said: “It wasn’t until we were older and started looking through the old newspaper articles about us that we realised what a big deal it was.

“We always had film crews and journalists at our birthdays but when we were four, five, six years old, we were just really fascinated by it all.

“Our friends would ask, ‘Why are you on TV? Are you famous?’ and we would tell them we were born stuck together and I think that was quite mind-blowing for them.

They didn't know if we were going to walk. When we did, people said it was a miracle

“When we were 12, we moved to a different school, out of the area, and we just didn’t talk about it. No one knew what happened to us.”

She added: “We’re past the stage when we feel we had to talk about it and now we’ve chosen to because we want to show we’re living our lives in the best way we know how.

“With social media, we’re seeing other young people talking about their stories, although not many people come forward as conjoined twins. It’s still rare.

“We talk about how we have good and bad days, but we are showing that people with disabilities can have good lives and have careers and we hope that is inspiring for others.”

As they have come to the end of their treatment at the Children’s Hospital and moved into adult care, the twins wanted to show how much they appreciated all the help they have received as a final farewell.

They are aiming to raise £10,000 for the hospital through online singathons with friends and family, sports events and various other fundraising ideas.

Dr Satish Rao, Deputy Chief Medical Officer at the hospital, said: “The twins’ surgery was quite unique at the time, and more challenging than other conjoined cases, as it was their spinal cords that were fused.

“After the successful separation, there was still some uncertainty as to whether they’d even be able to walk, so to see the progress the girls have made over the years and to where they are now, given the complexity of where they started, is wonderful.

“I congratulate them on all their achievements and thank them for supporting our young patients through their fundraising.”

Sanchia said: “We didn’t get to say a proper goodbye due to the pandemic and we wanted to do some-thing more than just send a card.

“We wanted to say, ‘It’s been 20 years and you’ve done so much for us, we want to give something back.’” 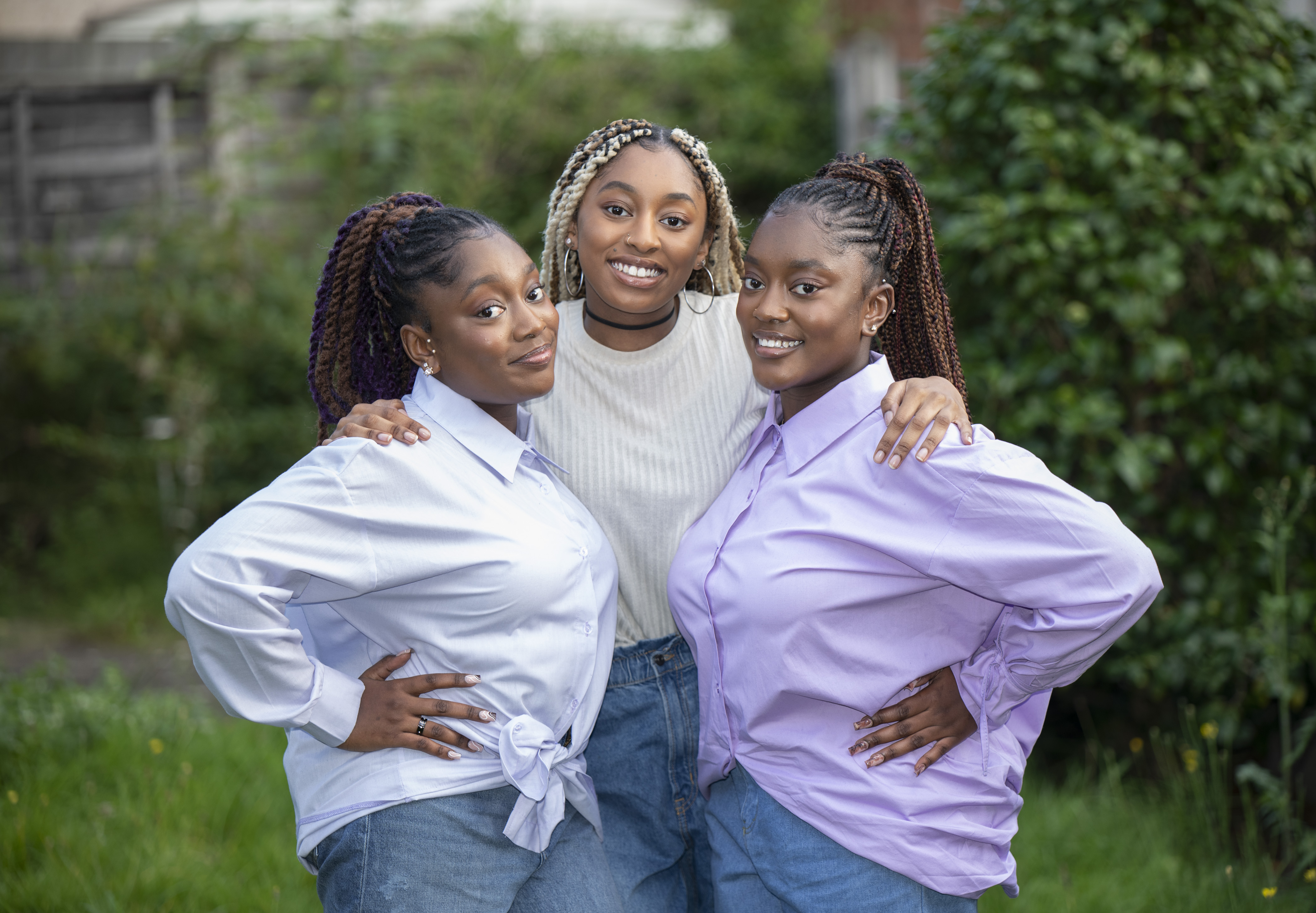 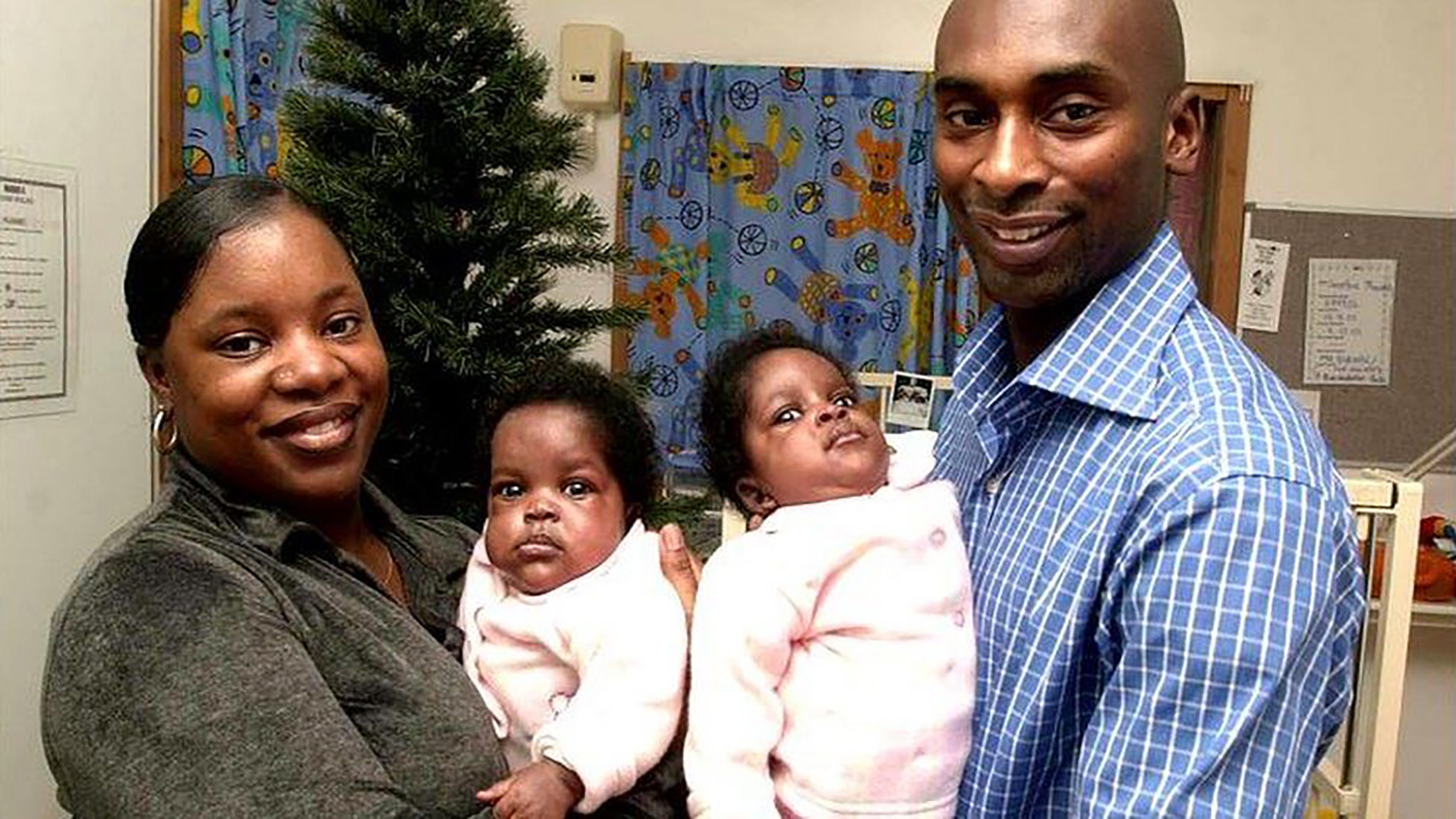