More than one in four state secondary school pupils have a private tutor, new research shows

Nearly a quarter of state secondary teachers have taken on private tuition in the last two years in a bid to boost exam results.

A study by the Sutton Trust education charity revealed the full scale of private tuition, with one in four secondary-age pupils benefiting from extra academic help.

Two-thirds of the teachers who have tutored did so after direct contact with parents. 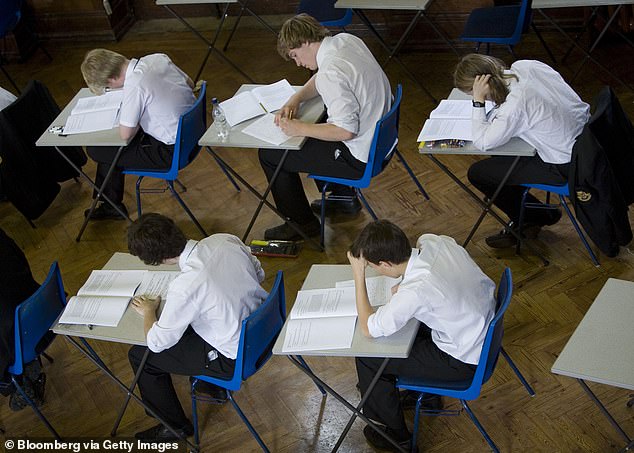 A study by the Sutton Trust education charity revealed the full scale of private tuition, with one in four secondary-age pupils benefiting from extra academic help

One in seven state primary school teachers have also given private tuition.

It means the equivalent of 80,000 state teachers are taking extra tutoring, despite complaints from teaching unions that their members are overworked.

The study, published today, also shows children in England are twice as likely as those in Wales to be tutored – 28 per cent overall compared with 14 per cent.

And as tutoring is often expensive, affluence is also a factor – with 34 per cent of rich children being tutored, compared with 20 per cent of poor children.

In London for this year, 41 per cent were tutored, making it the city where extra lessons are most widespread.

Sir Peter Lampl, founder of the Sutton Trust, said: ‘Private tuition is widespread. With costs of at least £25 per session, many parents can’t afford it.

‘The government should look at introducing a means-tested voucher scheme to enable lower income families to provide tuition for their children.

‘Schools should also consider the implications of teachers offering paid tuition outside of lessons and how this is promoted in school.’

The study also found ethnic minority children are almost twice as likely to have a private tutor in comparison with their white peers.

It found 42 per cent of children from black, Asian and minority ethnic (BAME) backgrounds have tutoring, while among white children it is just 22 per cent.

Some of the most prolific users of tutors are Asian children, with 46 per cent using them.

The figures will add further weight to the theory that on average, ethnic minority families may be more motivated to succeed.

Experts have previously warned that white working class children are falling behind because they are stuck in communities which lack aspiration.

The Education Endowment Foundation (EEF), the Sutton Trust’s sister charity, has identified one-to-one and small group tuition as a way to boost attainment.

The charity said schools should consider prioritising one-to-one and small group tuition in order to ‘level the playing field’.

Dr Mary Bousted, joint general secretary of the National Education Union, said: ‘Increasing use of private tuition reflects the worries that the Government has unnecessarily created in so many parents’ minds about school standards and students’ prospects.

‘Although offering support to students whose parents can’t afford private tuition may seem appealing, any extra funding available for disadvantaged students should be directed at addressing the shortfalls in pupil premium funding and the Government’s decision to favour schools in less disadvantaged areas in its own recent funding announcement.’