Grief-stricken brother shares heartbreaking final photo of his sister, 34, taken just days before she killed herself after suffering post-natal depression

A grief-stricken brother has shared the last photo taken of his sister, 34, before she killed herself following a struggle with post-natal depression.

Stephanie Housley, 34, had been ‘battling demons’ before she plunged to her death off a bridge above a dual carriageway near Stoke-on-Trent in March.

Her brother Simon shared an image of them ‘enjoying life to the full’ on social media before urging people to make the most of their time with their families.

Meanwhile her partner James Walton told North Staffordshire Coroner’s Court the pair had been ‘so happy’ during their 18-month relationship and that none of her family were aware she had suicidal thoughts.

The inquest was also told she had enjoyed a ‘lovely meal’ with a relative just hours before she jumped from the bridge. 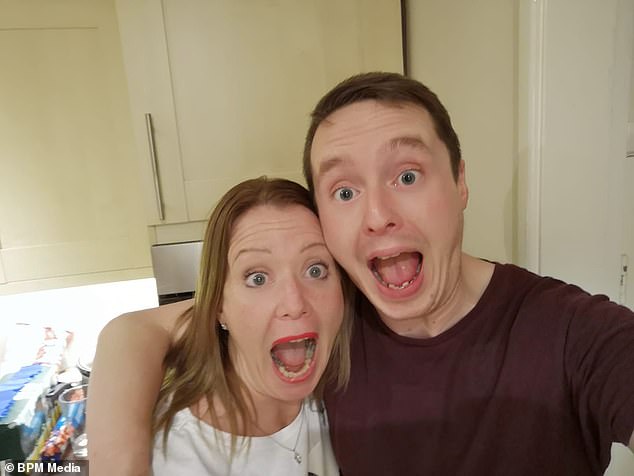 Stephanie Housley, pictured with brother Simon, killed herself after jumping from a bridge above a dual carriageway after struggling with post-natal depression

She had been diagnosed with post-natal depression three months before her death after her daughter began suffering with colic – a condition where a baby cries for long spells without any apparent cause.

In a statement read out at yesterday’s inquest, Mr Walton said his partner ‘just wanted to be a mum’ but they had struggled because their daughter developed stomach problems.

He said: ‘We found out we were having a baby together, moved in together, and were so happy.

‘Following the birth of our daughter, Steph suffered with post-natal depression. Our daughter was having stomach problems and we discovered she had a dairy intolerance.

‘It was a hard time for both of us, especially waking up every two hours, we didn’t know what was wrong.

‘Steph was admitted to a parent and baby unit to receive some support. It started to become easier and Steph went back to work as a carer at UK Care Management.’

He added: ‘She loved caring for people, although she did not enjoy the long hours. It restricted time with her daughter as she did 12-hour shifts two days a week.

‘This was due to change to three days, that was the only thing playing on Steph’s mind, she just wanted to be a mum.’

The inquest heard Ms Housley had attempted to kill herself twice before and her father committed suicide when she was a child.

Mr Walton said he last saw his partner alive at 7am on March 11 when he made her a cup of tea and took their baby to her.

Later Ms Housley and a relative shared three bottles of wine with their meal at the Weathervane pub, in Meir Park.

The inquest heard they then walked to a nearby Tesco before the relative took Ms Housley’s daughter home. 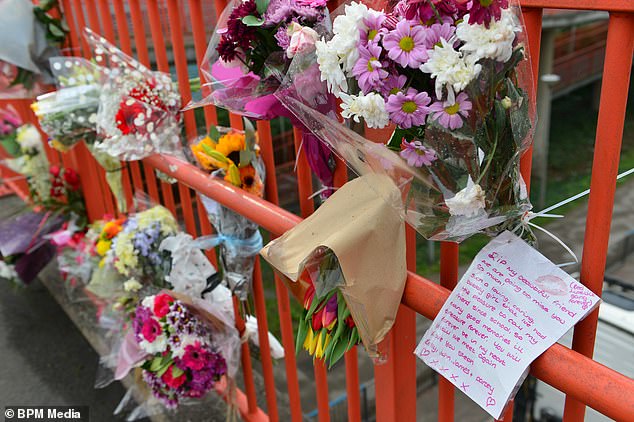 Tributes have been left at the bridge in her memory, pictured, and she was described as a ‘loving and caring’ woman by her partner James Walton who added she ‘just wanted to be a mum’

A dog-walker later saw Ms Housley sitting cross-legged on the bridge at 6.41pm.

The witness told the inquest said: ‘She turned to me and smiled. She looked very well presented and did not look upset. So I carried on walking my dog.

‘I looked back but carried on walking down and I called 101 and then 999 to raise concerns.’

The inquest heard Ms Housley fell to her death before the police could arrive and her family said they saw no warning signs that she was planning to take her own life.

Recording a conclusion of suicide, assistant coroner Sarah Murphy said: ‘I want to stress that having heard the evidence of Mr Walton there was absolutely no way that Mr Walton, or any of her family, could have known that that was her intention.

‘We heard she had a lovely time in the afternoon, there was absolutely no indication that that was going through her mind.

‘I hope her family and friends go away knowing there was nothing they could have done to prevent this. She was taking medication and had sought help.

‘She was a good mother and had returned to work, doing the best she could for her family.’

Grief-stricken Mr Housley posted the image online which he said appears to show two people ‘who look like they’re enjoying life to the full’.

He added: ‘But unfortunately what you see is two people who have battled their own inner demons for a long, long time.’

In a moving tribute, Mr Housley has now urged people and their families to seek help and to spend as much time as possible making memories with their loved ones.