Mounds of rubbish were left strewn across beauty spots this weekend as crowds of illegal campers were fined after blazing a path of ‘destruction’ through the Lake District.

Police and park wardens approached more than 200 people who pitched up at the National Park on Saturday night alone, where they cut down trees, snapped off handrails for firewood and left litter.

Officials were met with confrontation from some of the campers they told to leave, with a few apparently insisting it was the job of someone else to clear up their mess. 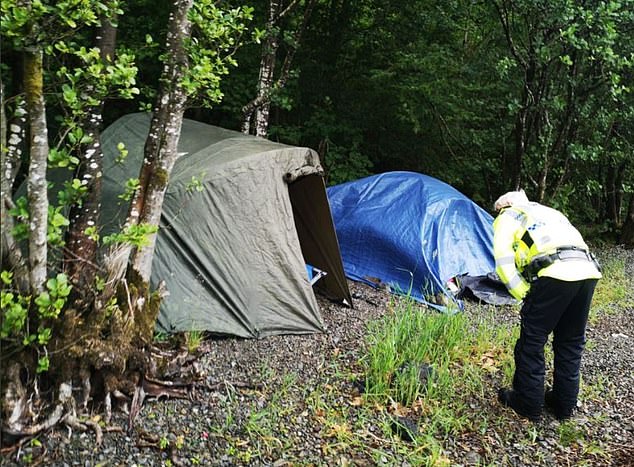 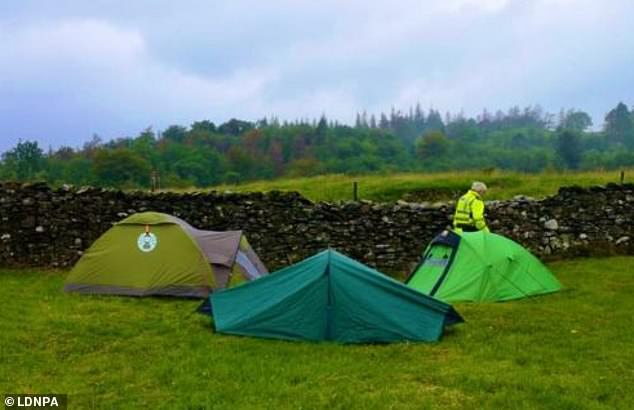 Officials were met with confrontation from some of the campers they told to leave, with a few apparently insisting it was the job of someone else to clear up their mess 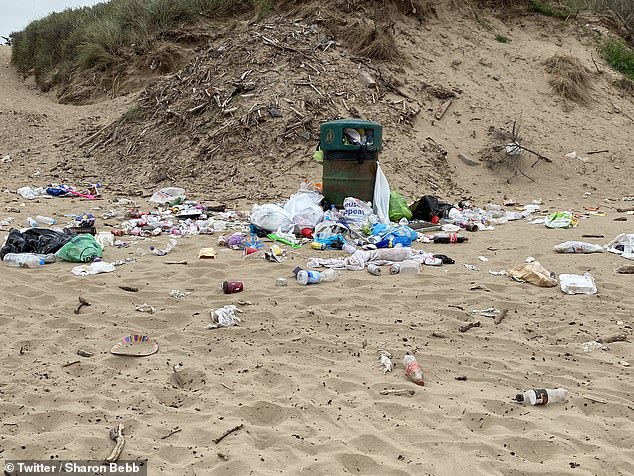 On Brean Beach in Burnham-on-Sea, Somerset (pictured), bins were overflowing with dozens of discarded bottles and plastic bags 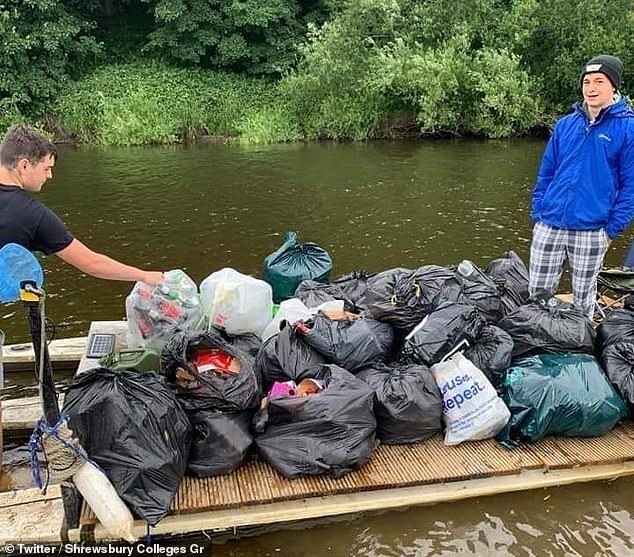 In Shrewsbury, two students from Shrewsbury College collected 20 bags of rubbish left by the river after seeing images of the weekend’s aftermath online

There were similar scenes in Norris Green Park, Liverpool, where volunteers spent this morning collecting litter and broken bottles which were abandoned on the grass after a weekend of warm weather.

The volunteer group, Friends of Norris Green Park, explained they had left the area spotless on Saturday afternoon, but less than 48 hours later there was devastation across the park.

On Brean Beach in Burnham-on-Sea, Somerset, bins were overflowing with dozens of discarded bottles and plastic bags.

Day trippers also left behind a trail of litter in the quarry below Ffordd Clegir in Caernarfon, Wales after the weekend, with inflatables left floating in the water.

And in Shrewsbury, two students from Shrewsbury College collected 20 bags of rubbish left by the river after seeing images of the weekend’s aftermath online. 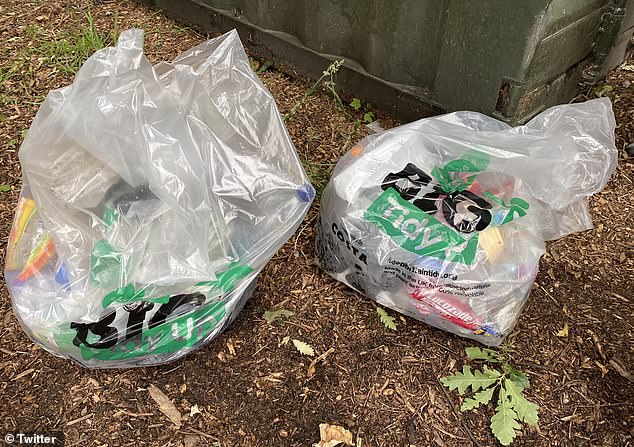 There were similar scenes in Norris Green Park, Liverpool, where volunteers spent this morning collecting litter and broken glass which was abandoned on the grass 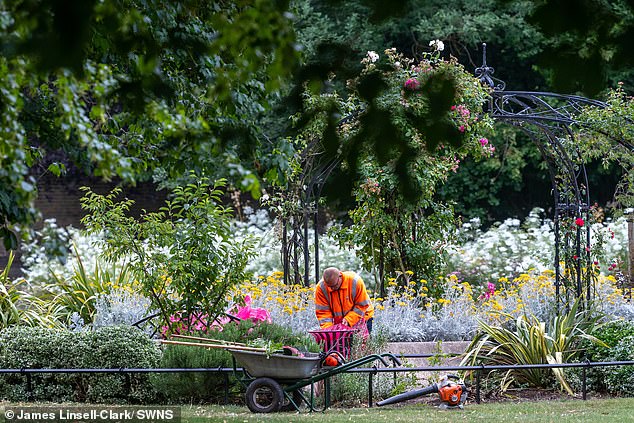 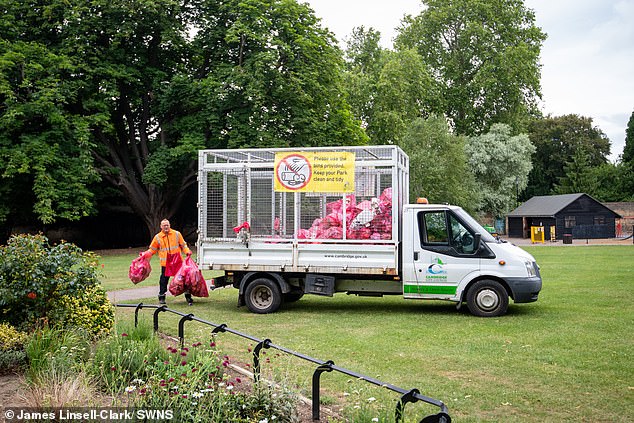 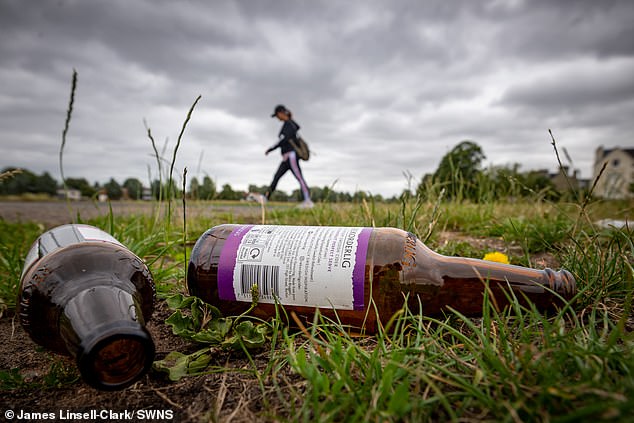 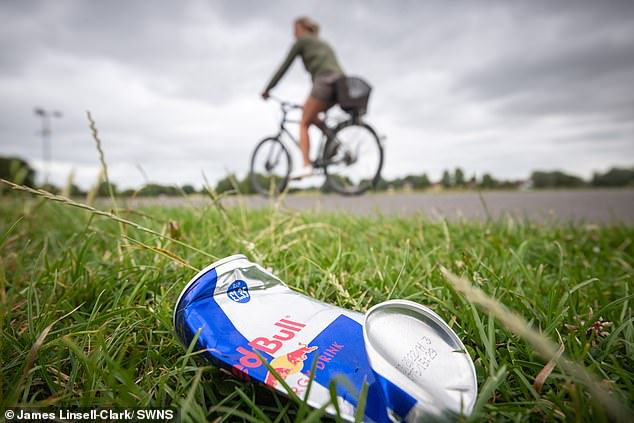 Wild camping in the Lake District is still forbidden as part of the lockdown rules banning overnight stays.

Park authorities are up in arms over the scale of this weekend’s damage, which saw campers snap off handrails to burn as firewood.

More dismaying photos show bark had been stripped back from the trees in vandalism which will take ‘years to heal’.

Over the weekend, 11 Britons from areas including Birmingham, London, Liverpool and St Helens received fixed penalty notices for camping in tents at Blea Tarn.

Another 20 people from Carlisle were found having an overnight party on Catbells near Keswick.

The force issued more than 20 fixed penalty notices to offenders at the weekend.

Slamming the ‘appalling behaviour,’ the force tweeted: ‘The destruction of this beautiful place will not be tolerated. If you can’t abide by the countryside code then please don’t visit.’

Tony Watson, head of communications at the Lake District, tweeted: ‘Our teams and those of our partners have spoken to over 200 individuals tonight.

‘From 20 people partying on Catbells, to people camping with fires on summit cairns, to people who’ve driven miles down paths to camp, to drunken camps by tarns and everything in between. 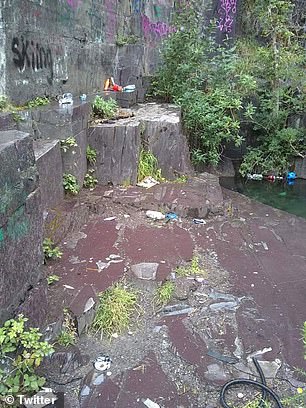 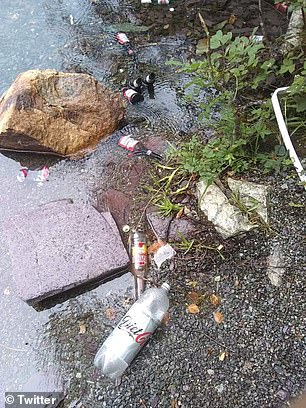 In Ffordd Clegir, Caernarfon, glass and plastic bottles were left floating in the water today 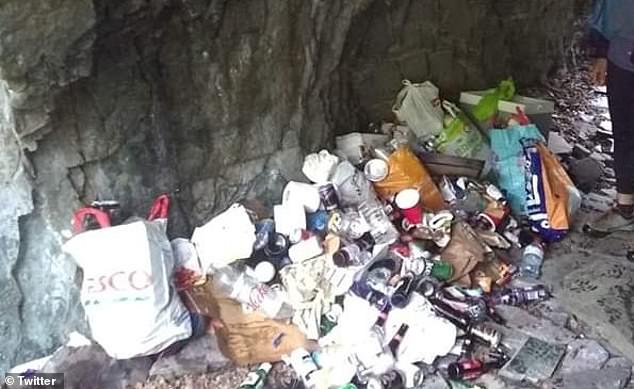 Litter is seen piled up in the quarry below Ffordd Clegir in Caernarfon, Wales after the weekend, with inflatables left floating in the water 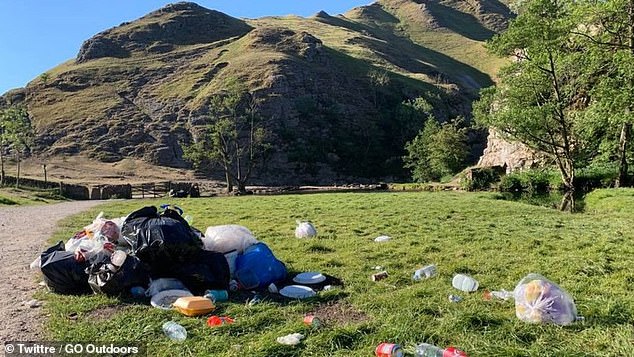 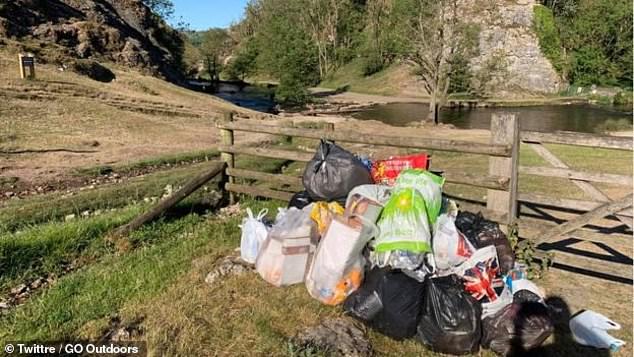 Rubbish was also piled up next to fences in outdoor areas, left by weekend day trippers 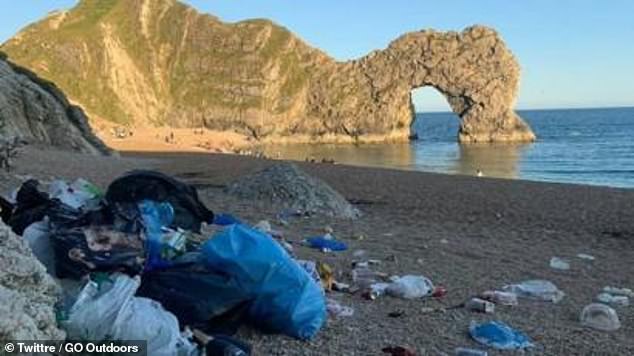 On beaches, glass and plastic bottles were strewn across the sand by visitors

‘A few minutes of senseless fun results in impacts that will take years to heal. Refused to leave after very polite requests. Fined.’

Richard Leafe, chief executive of the Lake District National Park Authority added: ‘We welcome every visitor to their national park, especially those here for the first time.

‘I’m saddened by the behaviour of some during the past few weeks. Leaving litter, cutting down trees and blocking gates affects real people, including volunteers, who selflessly give their time to help look after this special place.’

Cumbria Police confirmed they had taken part in engagement and enforcement patrols targeting anti-social behaviour and Coronavirus Regulation breaches at the National Park.

Those involved in the multi-agency operation, including the Lake District National Park Authority and the National Trust, spoke to more than 200 people on Saturday night alone. 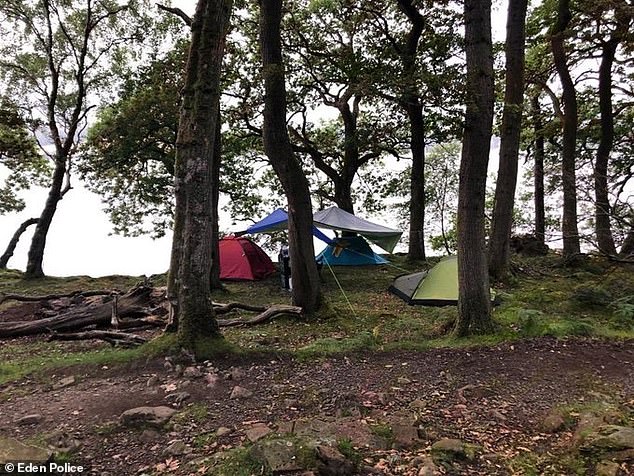 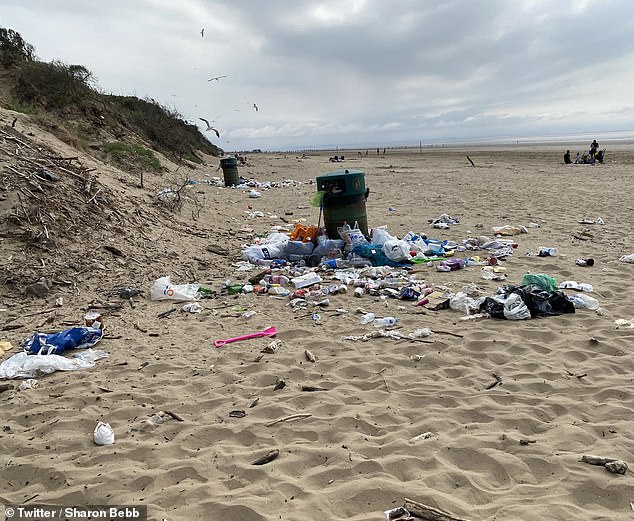 On Brean Beach, locals were dismayed to find overflowing bins with bottles and plastic bags across the sand 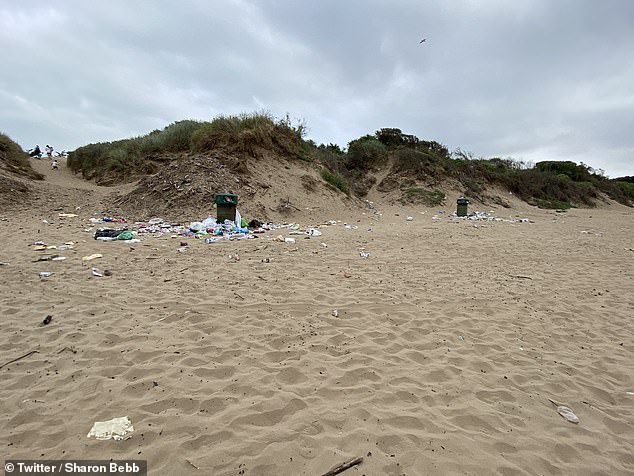 One user said: ‘This was the rubbish left on Brean Beach yesterday. I’m sure humans were not like this before lockdown, so why now!!’

Assistant Chief Constable Andrew Slattery, chairman of Cumbria’s Local Resilience Forum, said: ‘Many of the visitors had travelled some distance and whilst some claimed they didn’t understand or know about the regulations, others admitted they knew there were restrictions in place and decided to ignore them anyway.

‘Camping in most of the locations found over the weekend is normally prohibited by local bylaws.

‘Over recent weeks Cumbria has welcomed increasing numbers of people visiting the National Parks and the vast majority are following the rules, enjoying our wonderful county safely and respecting local communities but a number of people are engaging in anti-social and illegal behaviour that we will not tolerate.

‘Damage caused through cutting down trees, destroying fences for firewood and leaving rubbish or discarded equipment are all unacceptable in any circumstances, regardless of the pandemic.

‘Overnight stays are not permitted until July 4 and all those visiting should be aware of the Countryside Code and understand that it is their own responsibility to ensure that they do not leave any sign of their stay after they have left.

‘All the public authorities in Cumbria welcome the opening of local businesses and the safeguarding of local jobs. Our only ask is that we all do our bit to protect and preserve the very environment that attracts so many visitors to this important World Heritage Site.’

Related posts:
30/06/2020 World News Comments Off on Mounds of rubbish are left in beauty spots and beaches across the UK
Lifestyle