Mourners dressed in their most colourful outfits have descended on a chapel in Hull for the funeral of a transgender lottery millionaire.

Melissa Ede died on May 11 after suffering a heart attack. The 58-year-old’s death came just one week after she had complained of experiencing ‘crushing chest pain’ which left her ‘hardly able to breath’.

Her partner Rachel Nason said the funeral, which included a rainbow painted horse-drawn procession would be a fitting tribute .

The cortege travelled down Cottingham Road, past McDonalds, which Melissa loved and arrived at the gates at Chanterland Creatorium Hall at around 12.15pm.

Melissa became a multimillionaire after winning £4m on a Blue Scratchcard from National Lottery GameStore in January 2018. 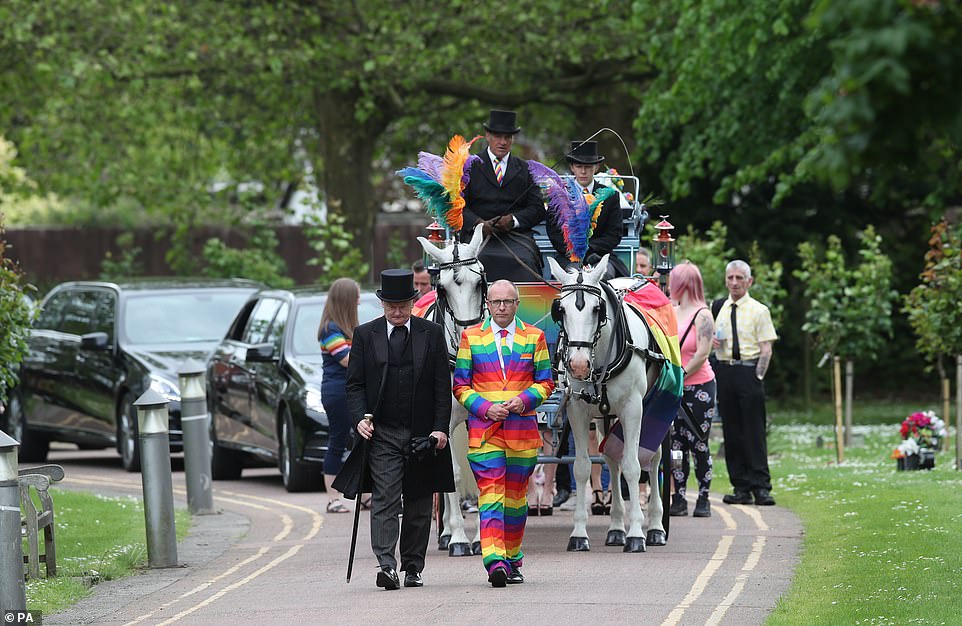 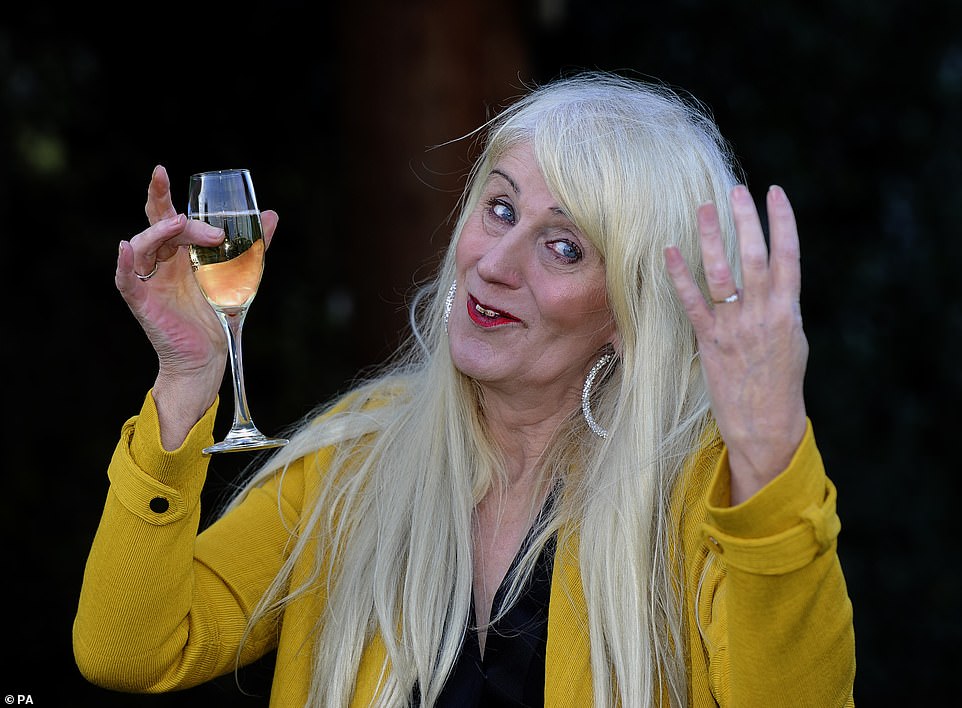 Melissa Ede (pictured above) died on May 11 after she suffered from a heart attack. She had previously won £4million on a scratch card 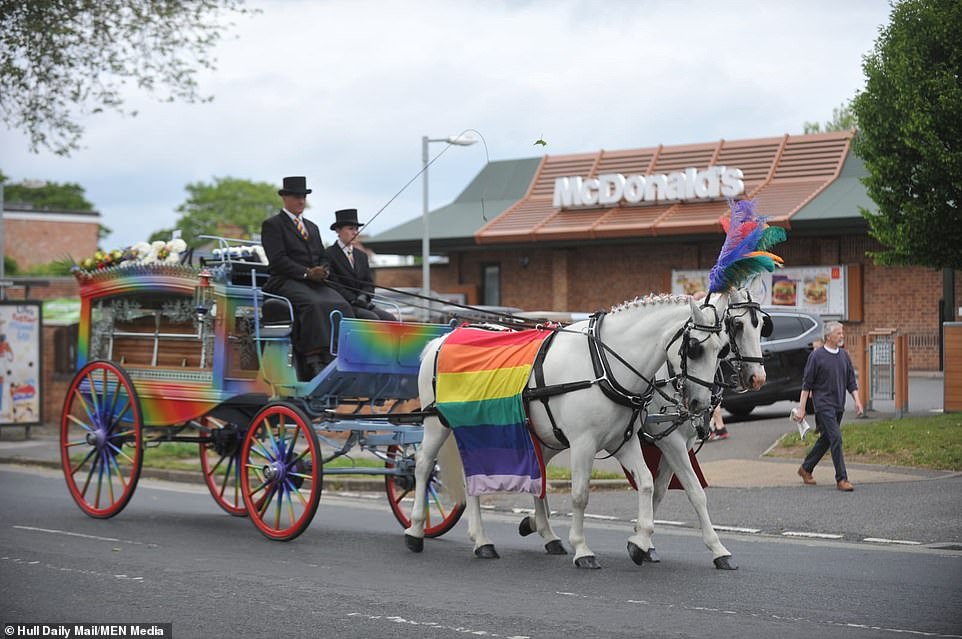 The horse drawn carriage, which had been spray painted in the rainbow flag, made sure to travel past the McDonald’s Melissa loved 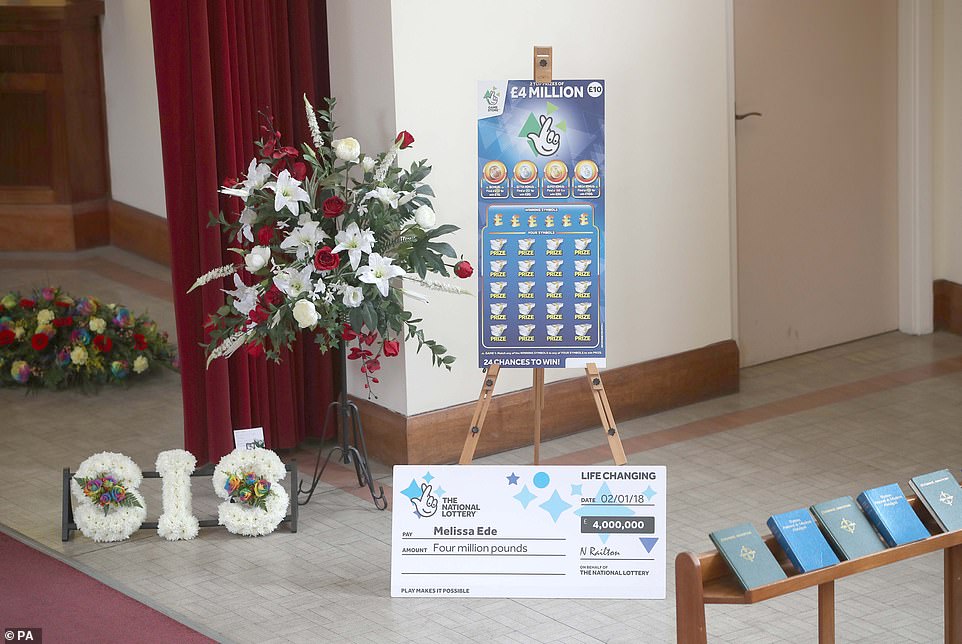 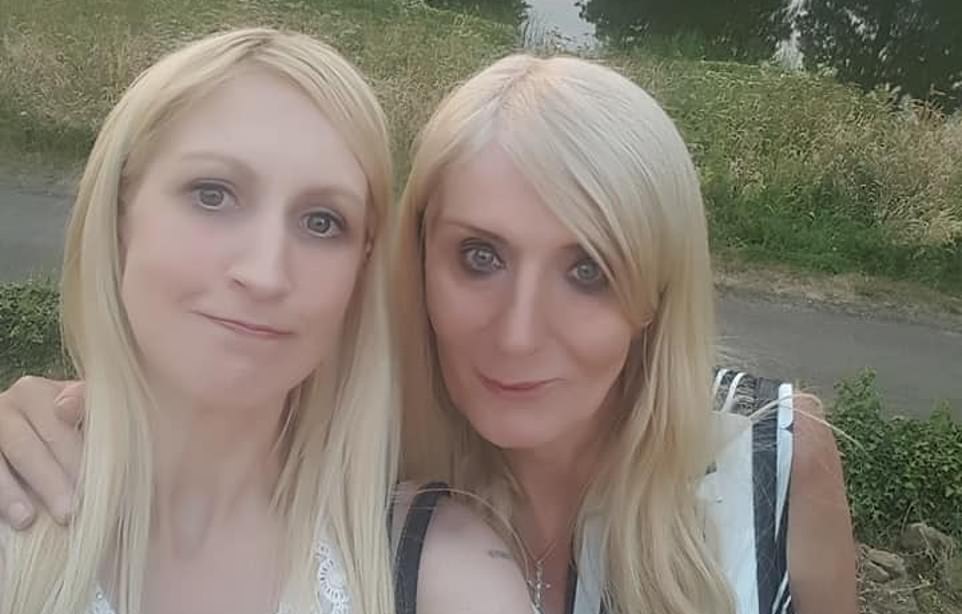 Her partner Rachel Nason (pictured with Melissa) said the funeral, which included a rainbow painted horse-drawn procession would be a fitting tribute 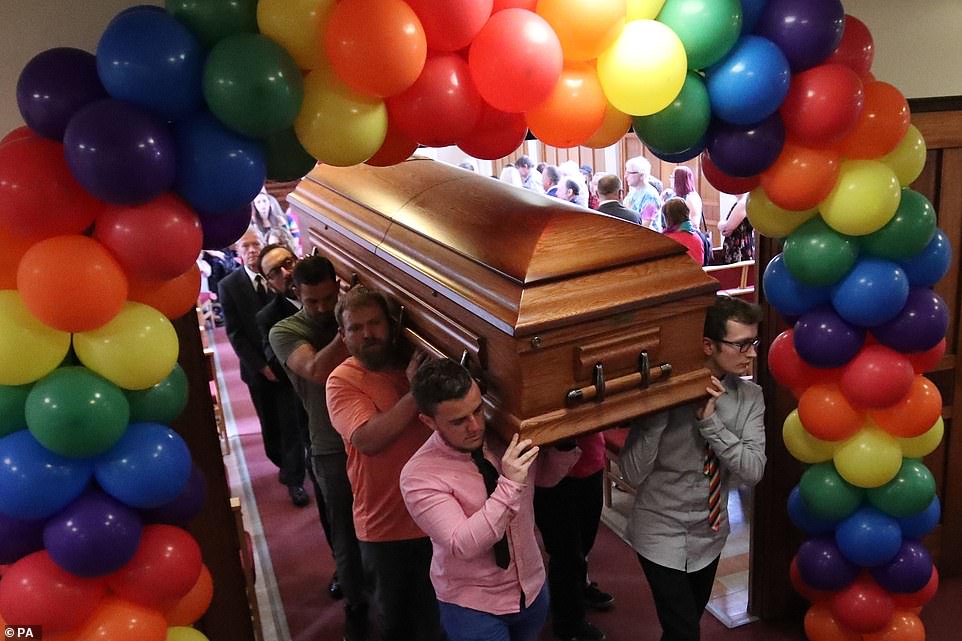 The funeral service took place at 12.30pm in the large chapel at Chanterlands Crematorium, Hull, followed by a private ceremony.

The family stated that the public were welcome to attend the first part of the day, celebrating Melissa’s life, but that the wake and ceremony were invite only.

A funeral notice posted online said: ‘We ask just for family flowers and for anyone wanting to make a donation we will be collecting for ‘Not Just Pets Rescue’ registered charity no: 1171567.

‘The wake will take place from 2.30pm at The Star pub in Carr Lane, Hull.

‘There will be karaoke, a buffet and a bouncy castle. Children are allowed to attend until 7pm. 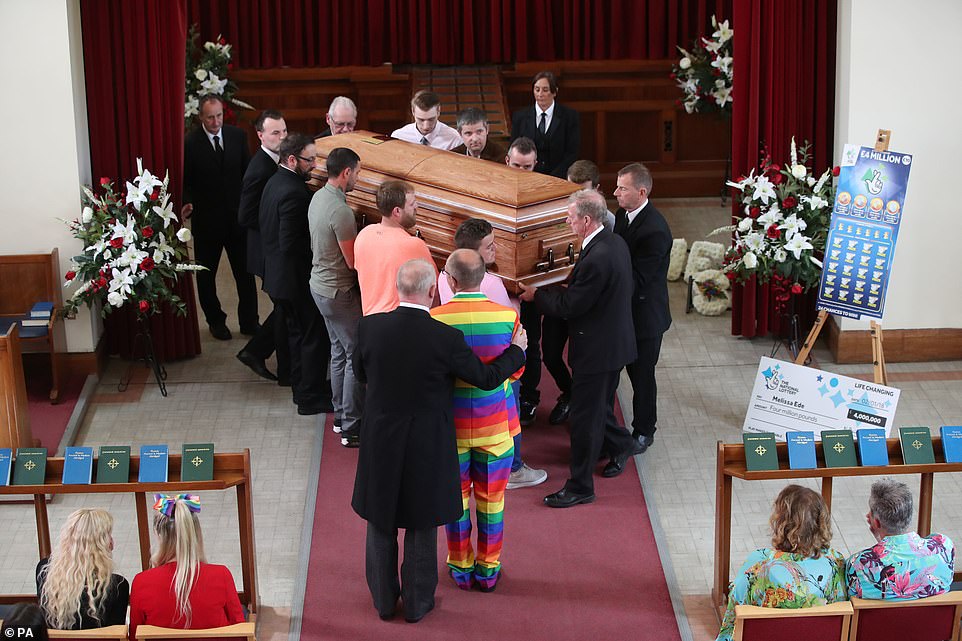 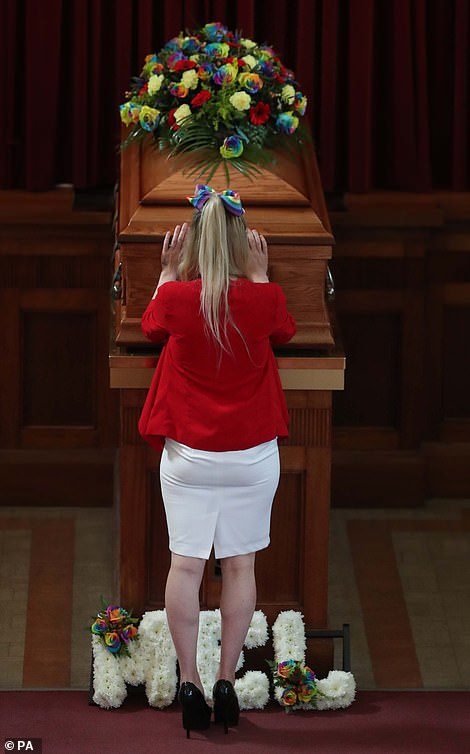 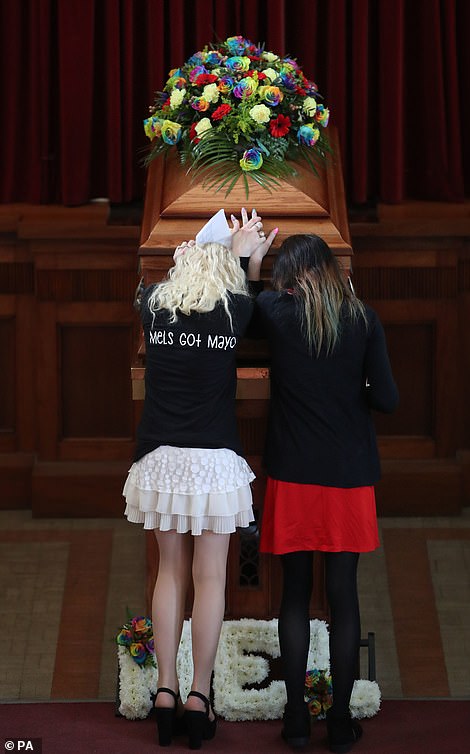 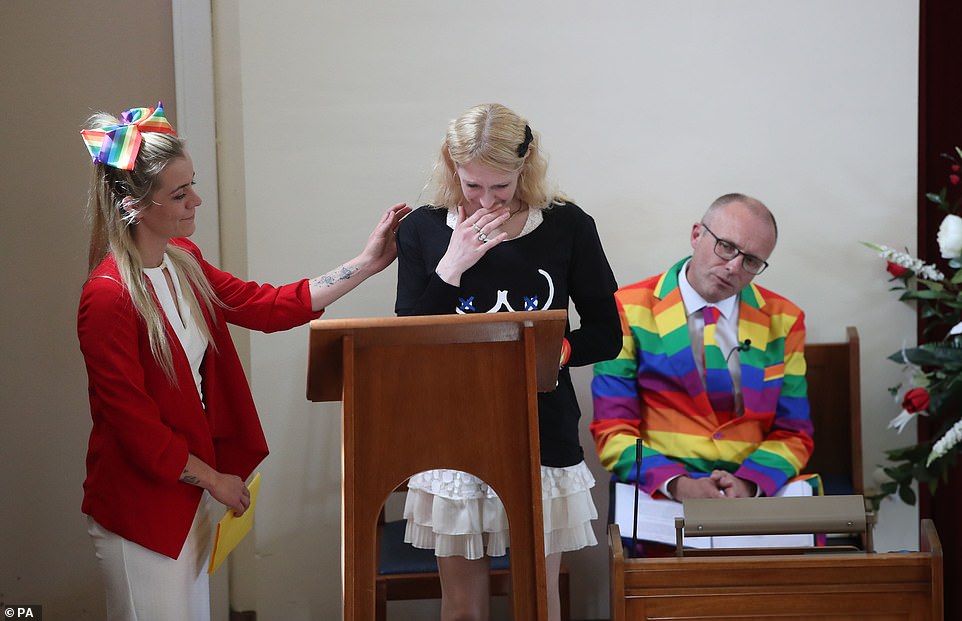 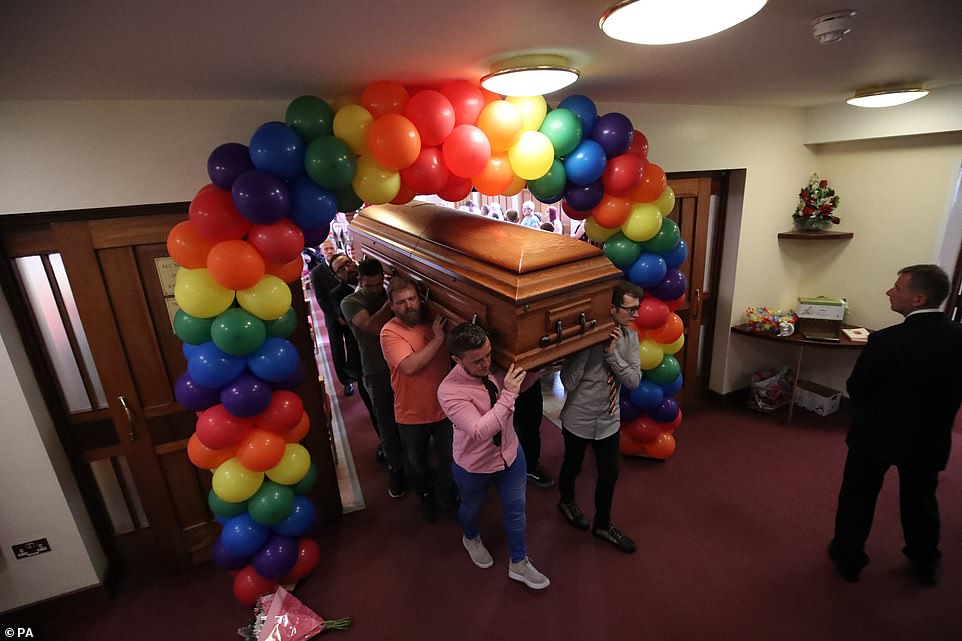 Bunches of flowers can be seen laid on the floor while friends and family, all dressed in colourful clothing carry the coffin out 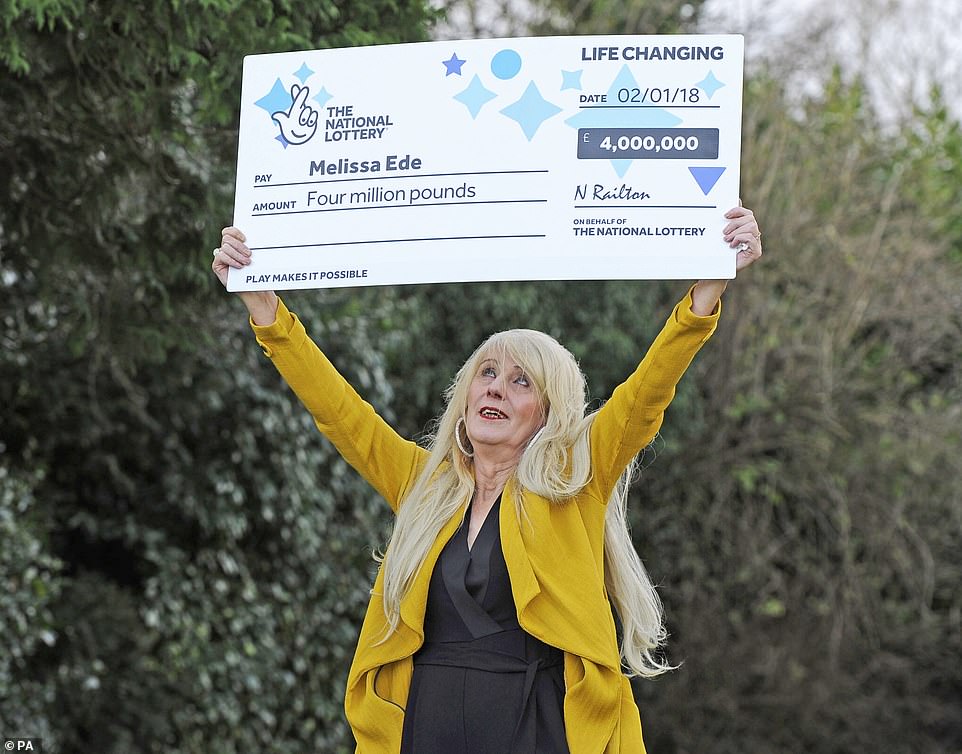 Melissa (pictured above) became a multimillionaire after winning £4m on a Blue Scratchcard from National Lottery GameStore in January 2018. 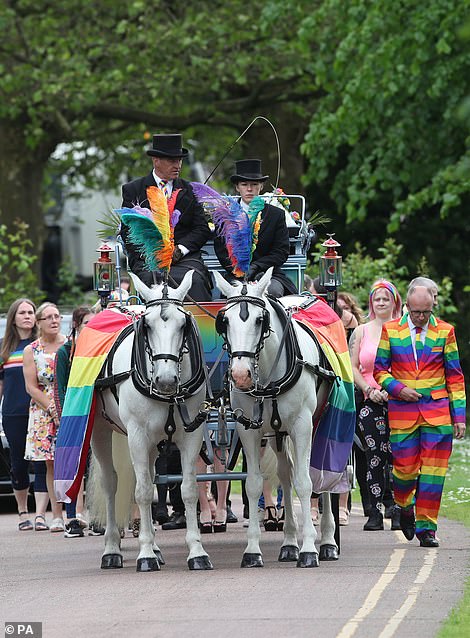 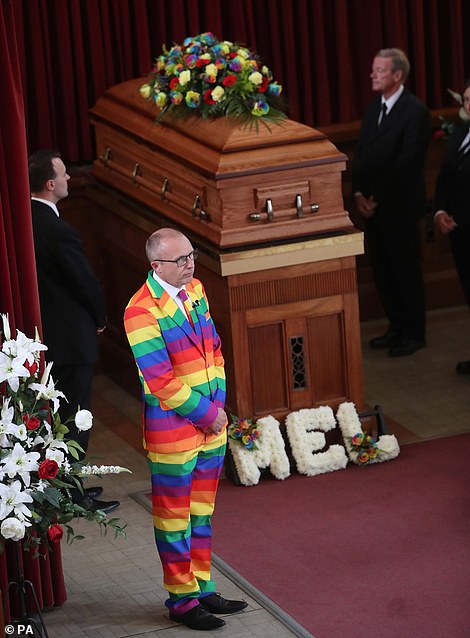 The notice read: ‘We are allowing the public to join us and we will take comfort in the fact that you cared enough to take the time to express your support and we ask that nobody be disruptive, cause distraction or make a loved one feel uncomfortable.

‘The focus is our last chance to say goodbye, put our own needs aside, support and comfort each other.

‘This will be your chance to know the ‘behind the scenes’ and real Melissa Ede. Press and media will be present.’ 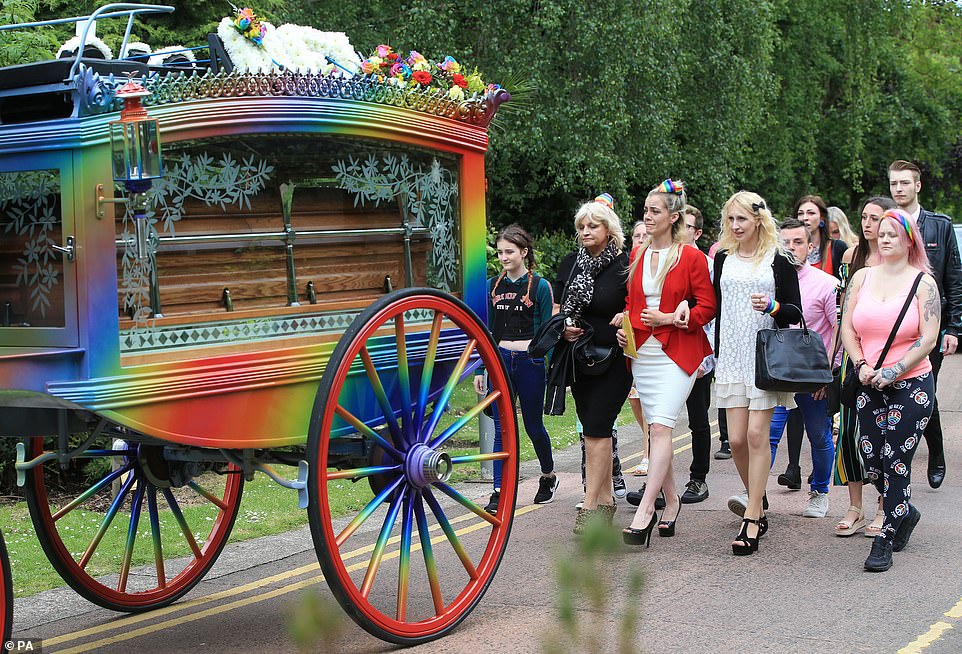 Mourners wore their brightest outfits for the service and can be seen above following a multicoloured horse and cart, while they linked arms 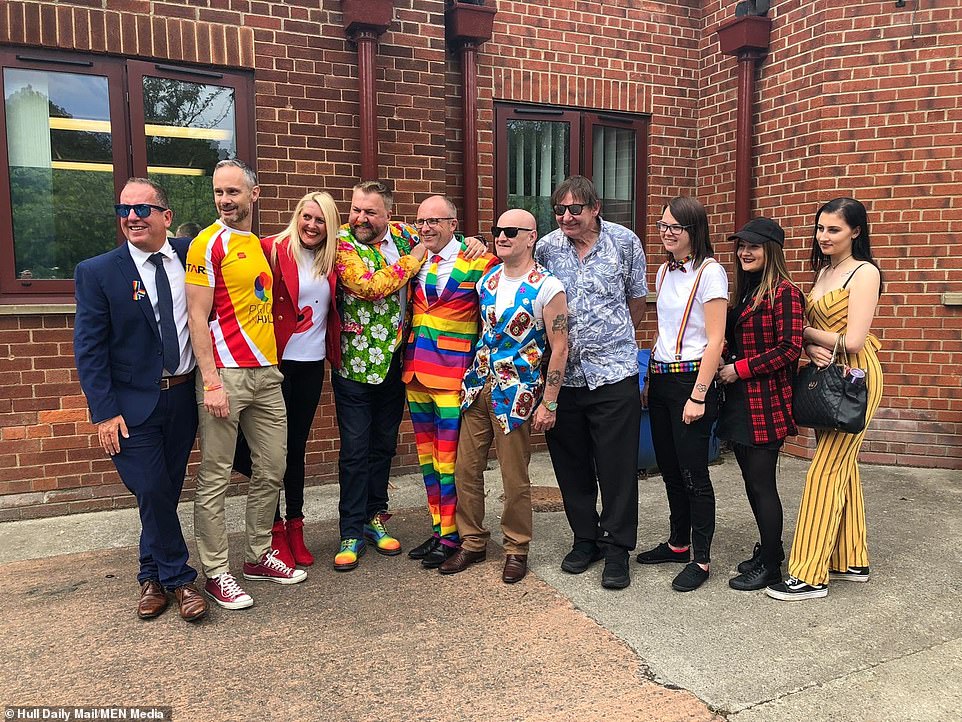 Mr Devine said: ‘This is the first time a family has ever asked me to dress like this. I’m hoping to expect a lively, vibrant service for an amazing woman.

‘She’s obviously had a massive effect on the people of Hull in various different ways from her transition then her viral videos that are infamous.

‘We’re just going to celebrate all that is Mel and we intend to show the different sides of her and we’ve even got a bit of a ‘Melmix’ of her best bits.’

Andy Train, chair of LGBT Humber forum, said Melissa’s videos were ‘too cheeky’ for Pride events, but would have loved to had her perform. 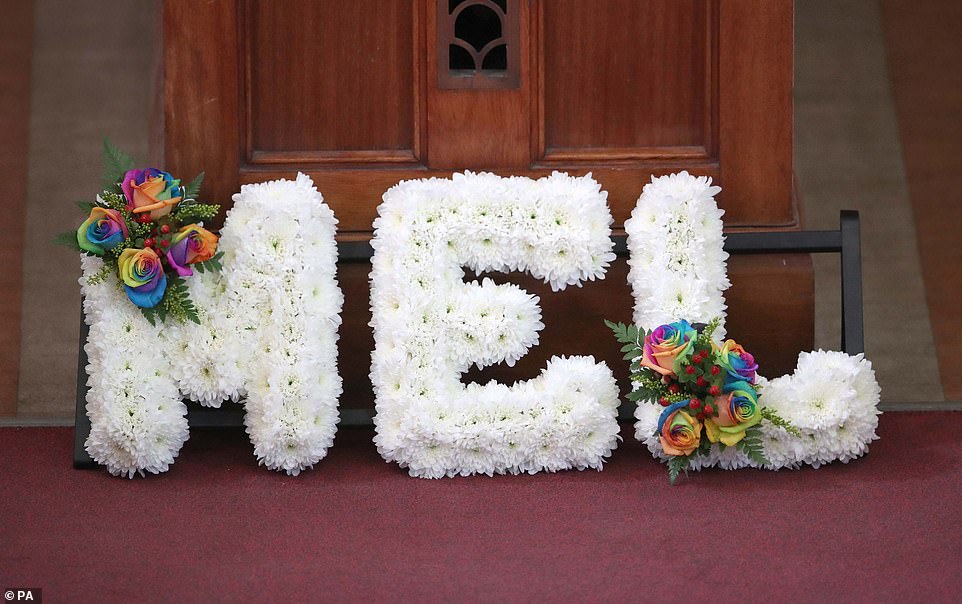 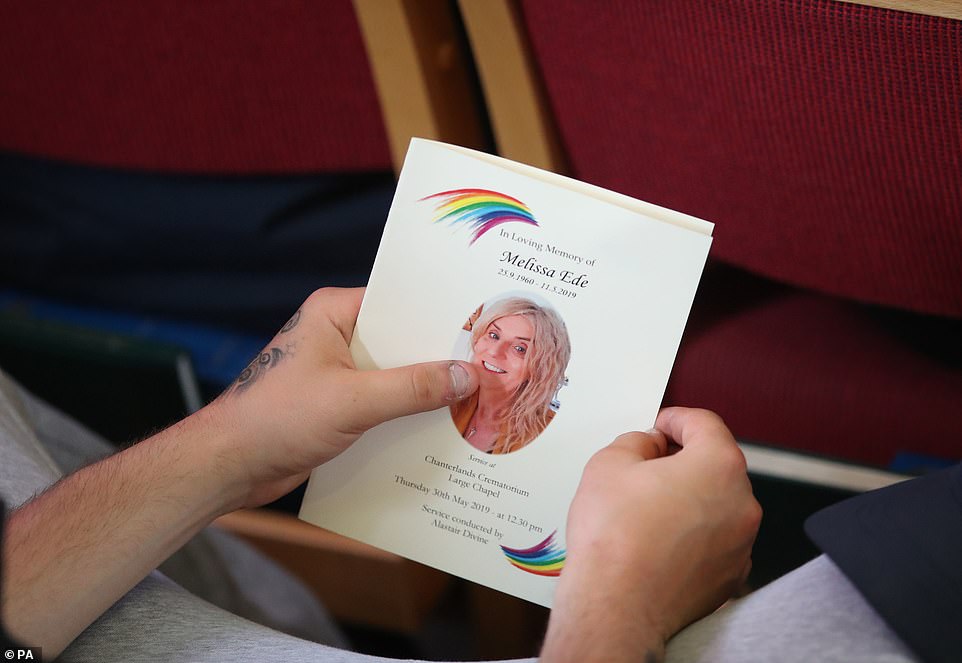 A person holds the Order of Service in Chanterlands Crematorium, Hull, during the funeral of flamboyant lottery millionaire Melissa Ede 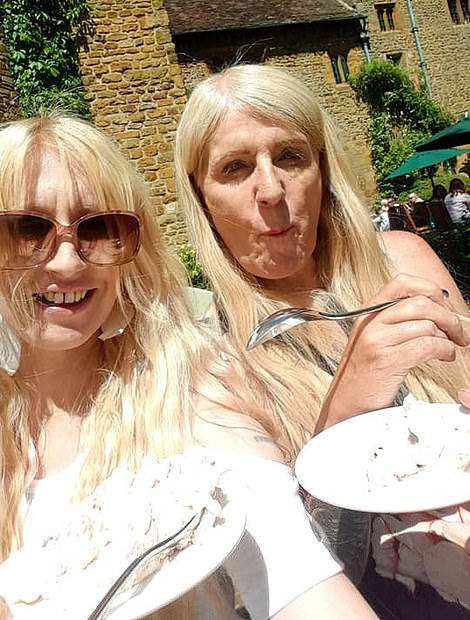 Melissa (left) was previously married for six months in 1979, when she was known as Leslie, and fathered children before her gender reassignment. She is pictured right with Rachel

For the funeral, he wore a multi-coloured jacket with marvellous patterns on and a rainbow moustache.

Mr Train said: ‘We expect it to be a colourful and memorable funeral. Mel was one of these characters who was colourful and had fun in doing what she did.’

Roy Brown-Lowe, who was on Britain’s Got Talent as a magician, said he first started speaking to Melissa on social media.

He said if he got to the semi-finals of the show she would have been his stooge.

Mr Brown-Lowe said: ‘We used to have a laugh and she used to call me Roy-Roy. We left it too late to meet up. People will remember her and her character and she had a caring side despite the haters and she would sometimes even care for the haters. 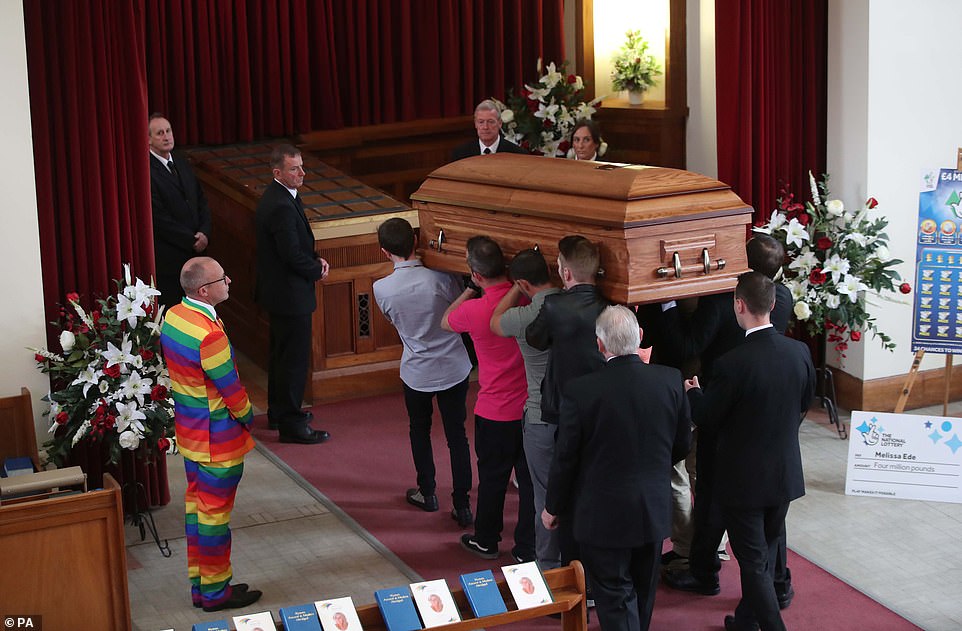 Inside the crematorium, friends and family members are seen walking with the coffin. People are the funeral said Melissa had a really caring side 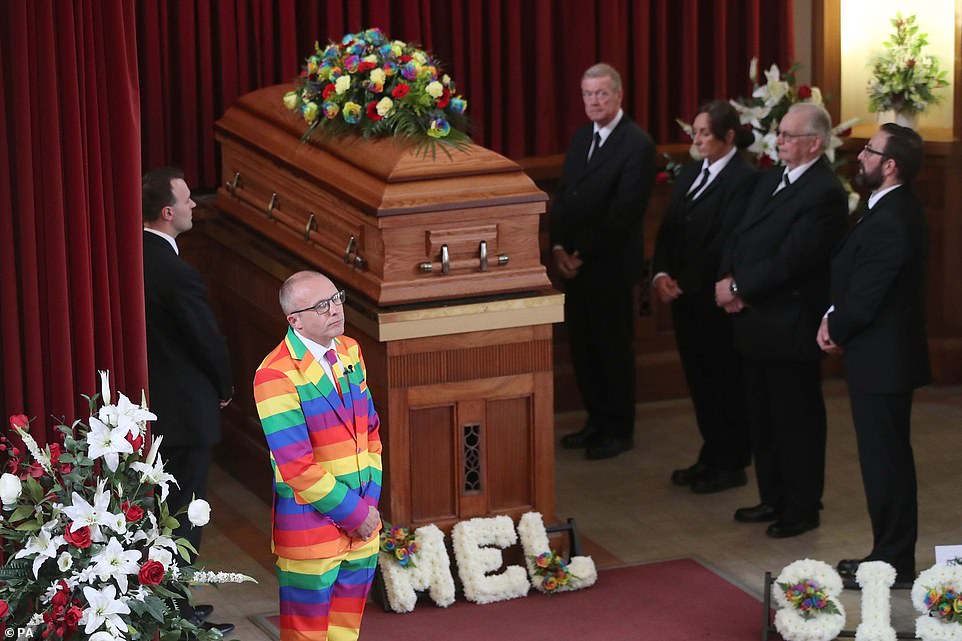 Family and friends said the thing they will remember most about Melissa if her character and her caring side despite the haters. Pictures above, the funeral party inside the crematorium 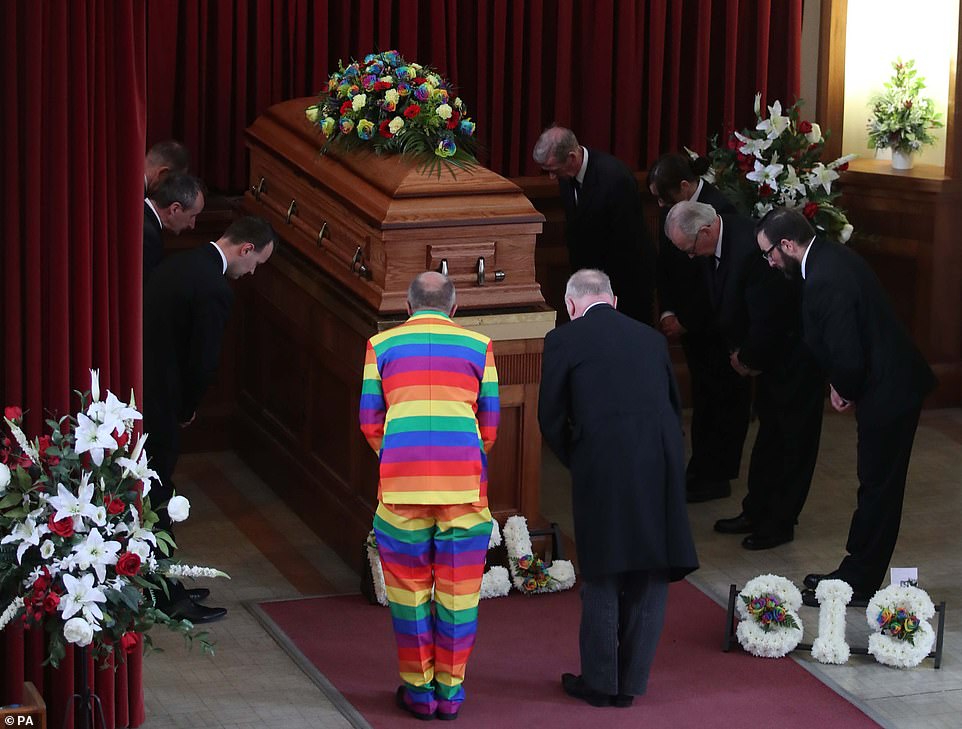 ‘It’s very sad she got to the pinnacle and it was all taken away but at least she got her time before. In five or ten years sites will still be sharing her videos and she’ll still be remembered.

‘The LGBT+ community will remember her and she highlighted it. She left a legacy and she fulfilled her dream and they would have got bigger and bigger.’

Melissa was previously married for six months in 1979, when she was known as Leslie, and fathered children before her gender reassignment.