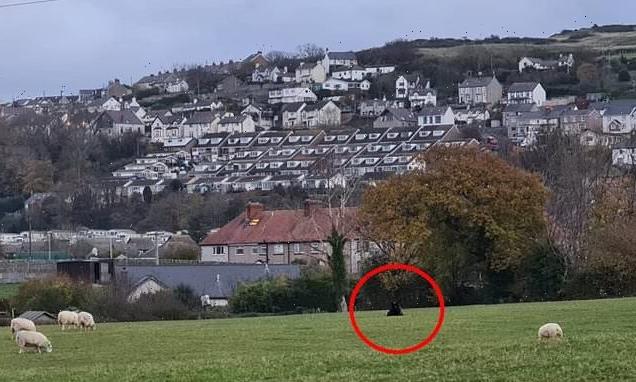 The ‘Puma of Penrhyn Bay’? Mystery black beast spotted in a field in Wales is claimed to be a ‘panther or a puma’ by startled walker who snapped it ‘stalking’ sheep

A walker couldn’t believe her eyes after coming within yards of a mystery black beast in Penrhyn Bay, Wales.

A man named Gethin spotted the black, long-tailed creature during a walk past the town’s Queen’s Head pub.

After Gethin uploaded his report and a picture of the creature stalking sheep to Puma Watch North Wales- a local monitoring group.

Gethin couldn’t see whether the mysterious beast was a Puma- a breed of mountain lion or a panther. 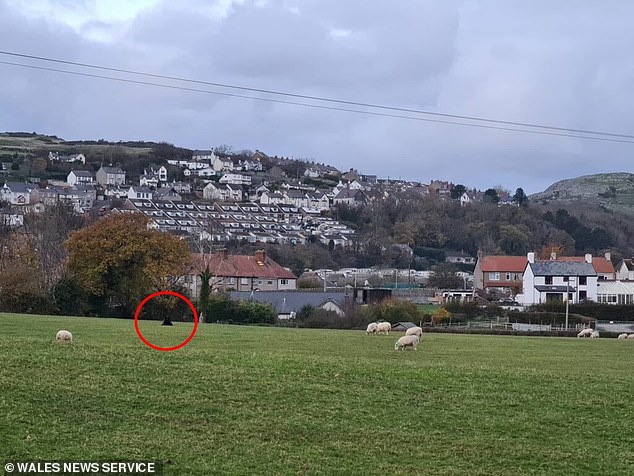 Gethin spotted the black, long-tailed creature during a walk past the town’s Queen’s Head pub in Penrhyn, Wales

‘I spotted a large black puma or panther in the field behind the pub.’ Gethin said.

‘The animal was stalking a group of sheep, crouching low in the grass as it crept closer and closer. I couldn’t believe my eyes.

‘I’ve never seen a big cat in real life before, let alone one in a field of sheep.

‘The animal was difficult to see as it was a cloudy day and at dusk, the light was fading quickly, but I could still make out its sleek and powerful form as it moved around the field.

‘It was an impressive sight, to be sure, and was a strange and unexpected experience, but one that I’ll remember for some time. I got my phone out and took a photo, at first just so I could zoom in and try to make sense of what my eyes were seeing.

‘Then when I looked up from trying to zoom in on the second photo, the puma had completely disappeared from sight.’

Sightings of a mysterious beast have been reported by others earlier this year ‘just a few fields away’ from this sighting.

Puma Watch founder, Tony Jones, said: ‘Big cats such as pumas are solitary with a hunting range of dozens of miles.

‘They’re mostly spotted in Snowdonia and the Clwydian hills but reports of sightings in urban locations some distance from these areas are becoming more frequent.’