A new law will give families of police officers who are killed in the line of duty like PC Andrew Harper legally guaranteed support.

Home Secretary Priti Patel is expected to speak of her disdain for those who ‘laugh in the face of the law’ at a meeting with top officers today.

According to The Sun, Ms Patel will tell the Police Superintendents’ Association: ‘The police and the families that stand behind them deserve special recognition.

‘I will put the Police Covenant in law to ensure they will always have the support of the nation.’

The Police Covenant will offer physical protection, help for health and well being and support for officers’ families.

The Home Secretary will have to report annually on the covenant and ministers will have a statutory duty to do more to support officers. Home Secretary Priti Patel is expected to speak of her disdain for those who ‘laugh in the face of the law’ at a meeting with top officers today. Pictured, PC Andrew Harper Lissie, now 29, had been married to Andrew, 28, for just four weeks when he was killed by a gang of three teenage thieves in August last year. Pictured on their wedding day

It comes after PC Andrew Harper died horrifically on August 15 last year when he tried to stop three men from stealing a quad bike in Stanford Dingley, Berkshire.

His ankle got caught in a strap dangling from the back of a Seat Toledo and he was dragged to his death.

The Thames Valley police officer’s killers Henry Long, 19, Jessie Cole and Albert Bowers, both 18, were jailed after being convicted of manslaughter at the Old Bailey.

The new law will have protections already in place for military personnel.

Paul Griffiths, president of the Police Superintendents’ Association, said: ‘The Police Covenant will provide formal recognition and a sign of clear value to the families of officers and staff who have made sacrifices in carrying out their duties.’

He added: ‘This important step forward will ensure that our duty to our people begins to mirror that of our duty to the public.’ 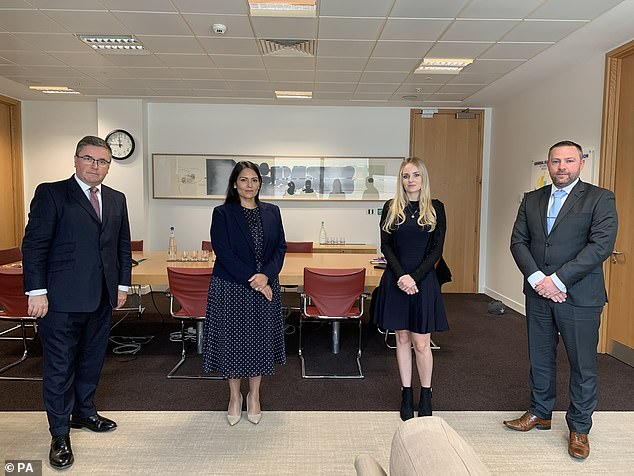 The campaign would ensure a minimum life sentence for criminals convicted of killing an emergency services worker.

Lissie, now 29, had been married to Andrew, 28, for just four weeks when he was killed by a gang of three teenage thieves in August last year.

One year on, she says that she has dreams where her husband is still alive and has written him ‘loads of letters’ which helps her deal with the grief.

Teenage sweethearts, the couple had been together for twelve years when they married in Oxfordshire in the summer of 2019.

Just four weeks later Lissie was woken up by a knock on her front door to the news that her husband was dead.

Henry Long (left), 19, and 18-year-olds Jessie Cole (centre) and Albert Bowers (right) were sentenced at the Old Bailey for manslaughter

In an emotional interview with the Sunday Mirror, Lissie said the hardest moment was collecting Andrew’s ashes, which made her realise that her sweetheart was really dead.

But even after a year she hasn’t yet been able to bring herself to scatter his ashes.

‘I’ve kept his ashes and they’re in a wooden box in my bedroom where I can see them,’ she said.

Last month, PC Harper’s mother spoke of her pain at watching her son’s killers ‘laughing’ and joking’ in court.

Long was sentenced to 16 years, while Cole and Bowers were each handed 13-year terms. The family said they were let down by the ‘unduly lenient’ sentences’. 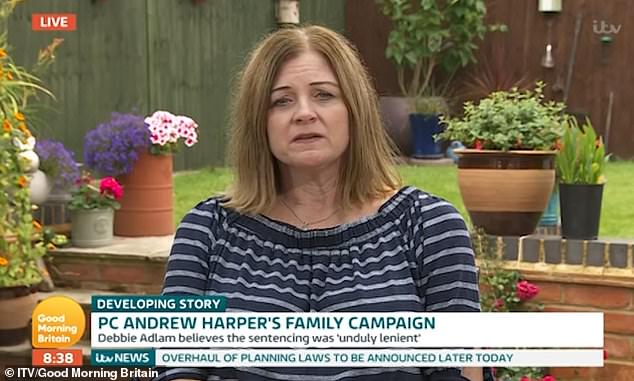 Appearing by video link from her home in Oxfordshire on Good Morning Britain she slammed the killers for ‘laughing and joking’ in court and said if her son was alive he would ‘fully support’ the campaign.

Asked if she would have felt different if the accused showed some remorse during the trial, she told Good Morning Britain: ‘I think I would, we’ve watched them laughing, joking.

‘Because of the situation with Covid things were laid out separately to the normal situation in a court room so we were sat for quite a long time sat with them on a video screen opposite where we were sat and they were joking and laughing and talking to each other and their microphones weren’t even switched on.

‘Which I don’t really understand how that’s appropriate. If you are in a murder trial how the suspects don’t have to sit there and listen to at least what there saying and doing while we are sat listening to their hideous crimes. I didn’t see any remorse. ‘

This week the Attorney General’s Office confirmed they have been asked to consider if the jail terms handed down are too lenient.

Mrs Adlam welcomed the decision this week, and this morning said she couldn’t understand why reductions were taken off the sentences for her son’s killers.