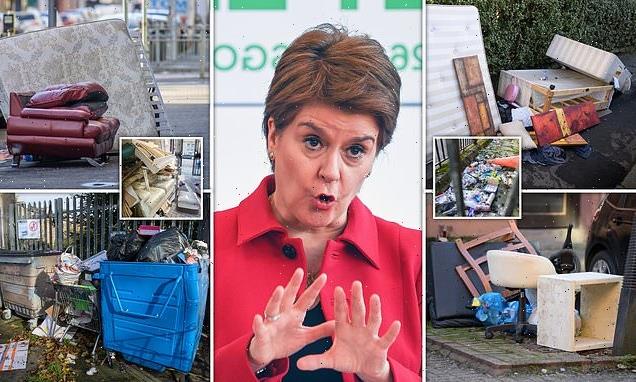 Nicola Sturgeon ordered to get her own house in order ahead of COP26 summit in Glasgow as train chaos, rubbish in her OWN constituency, soaring hotel prices and rising Covid case numbers risk embarrassing Boris on the world stage

Nicola Sturgeon is under growing pressure over Glasgow’s preparations for the COP26 climate change summit after her critics warned she risks embarrassing the UK on the world stage.

The UN summit will take place from October 31 to November 12 as Boris Johnson welcomes world leaders to the city to hammer out a plan to reduce harmful emissions.

But there are fears the crunch gathering could be overshadowed by a variety of problems, with the SNP being told to ‘fix the issues in their own back yard’.

Train staff are set to go on strike during the summit in a move which could cause massive disruption for travelling delegates.

Council bosses have been under fire over the cleanliness of the city as they denied that bins are overflowing.

Ms Sturgeon has been slammed by opposition politicians for lecturing world leaders on how to achieve a cleaner planet after photographs showed streets in her own Glasgow constituency littered with rubbish.

Meanwhile, the summit has prompted hotel prices to surge to unprecedented levels amid reports that delegates unable to find accommodation will stay in neighbouring towns and cities, making them reliant on potentially patchy train services.

The summit is also taking place against a backdrop of elevated coronavirus case numbers. 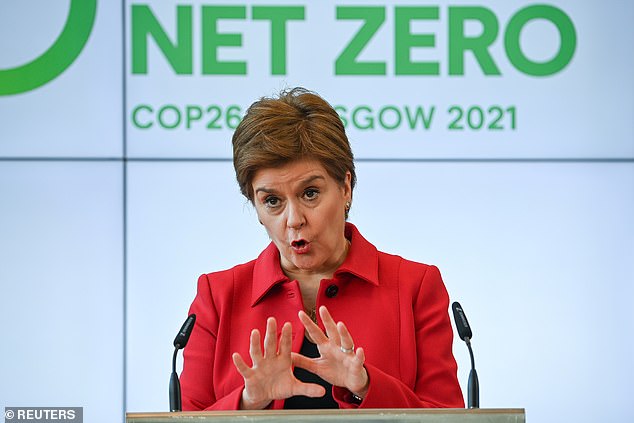 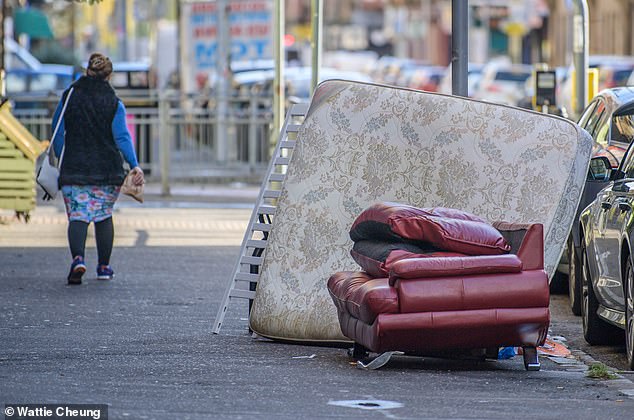 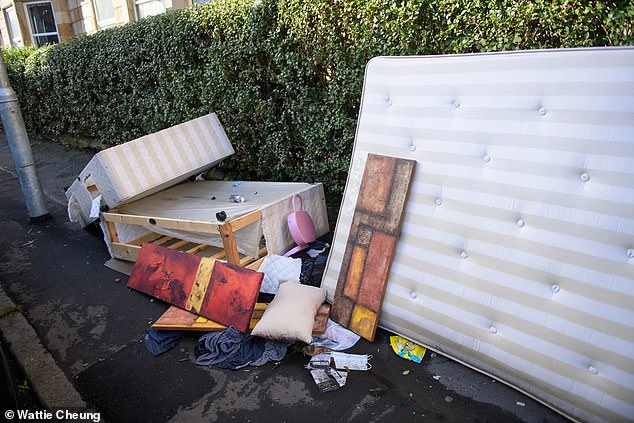 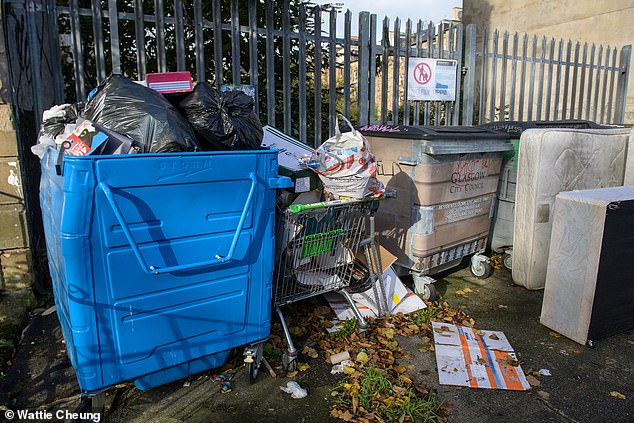 Ms Sturgeon gave a speech yesterday in which she lectured world leaders on how they should protect the environment.

However, at the very same time that the First Minister was urging politicians to take ‘credible actions’ to achieve net zero emissions and a cleaner planet, photographs were taken of streets in her own constituency ‘overflowing with rubbish’.

Less than two miles from the main arena where the COP26 summit begins on Sunday, piles of rubbish, fly-tipped items and overflowing bins were clear for all to see in the Govanhill area of Glasgow Southside, which Ms Sturgeon represents at the Scottish Parliament.

Meanwhile, addressing students at Strathclyde University in the city, the SNP leader spoke of encouraging ‘national governments to match the ambition of cities, regions and state governments’.

Opposition politicians called the situation an ‘international embarrassment’ at a time when the focus of the world’s media is on the city.

Conservative MSP for the Glasgow region Dr Sandesh Gulhane said: ‘Nicola Sturgeon said Scotland should use the “power of our example” to lead the fight against climate change – yet what kind of example is it that the streets of our First Minister’s own constituency are overflowing with rubbish?

‘The mess in Glasgow’s streets is on track to become an international embarrassment.

‘Our city has got into this state due to years of SNP incompetence and neglect, at both the Government and council level.

‘Nicola Sturgeon and the SNP must urgently fix the issues in their own back yard if they want to have any credibility discussing environmental issues on the international stage.’

Concern has been growing for months over fly-tipping and litter in Glasgow, which critics say has been fuelled by charges for the bulk uplift of domestic waste.

‘Instead, rubbish is lining the streets in the First Minister’s own back yard, while her government misses their own climate targets. If Nicola Sturgeon is serious about credible action, she should take some.’

Glasgow’s council leader yesterday denied bins are overflowing and rubbish collectors have needed hospital treatment for rat attacks, as she insisted the city is ready to host COP26.

Susan Aitken said Glasgow is ready ‘with caveats’ for the UN conference and none of the problems the city faces is ‘enough to cause panic’. 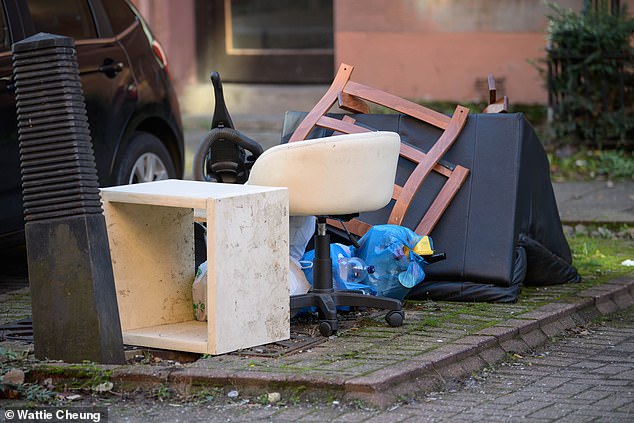 Concern has been growing for months over fly-tipping and litter in Glasgow, which critics say has been fuelled by charges for the bulk uplift of domestic waste 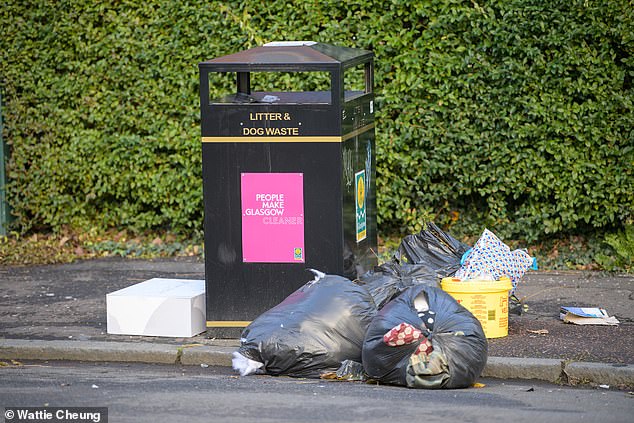 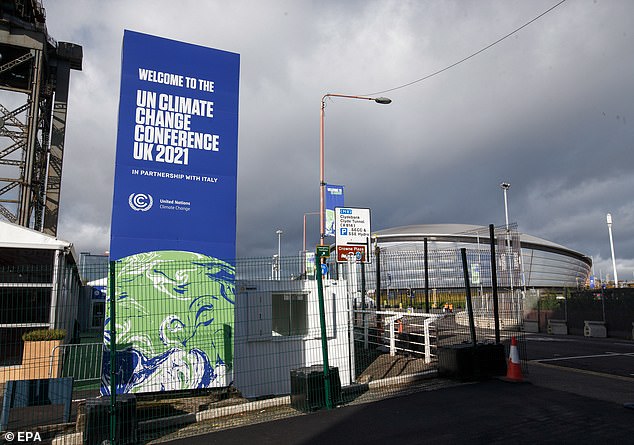 The UN COP26 summit will take place in Glasgow from October 31 to November 12. The Hydro, one of the venues being used for the summit, is pictured yesterday

Giving evidence to Westminster’s Scottish Affairs Committee about preparations for COP26, Ms Aitken argued that other cities are dirtier than Glasgow and she is ‘not embarrassed’ about its condition.

She said it is ‘entirely gratuitous’ to suggest the city is in a state of disrepair but that cleansing staff are ‘working round the clock’ ahead of the climate summit.

The Glasgow City Council leader said: ‘The COP26 co-ordinating board within the council met last week and the verdict was that we are ready, with caveats.

‘I would say the caveats are mainly technical, some of them have already been resolved or are being ticked off. None of them were massive, none of them were enough to cause panic.’

Scottish Conservative leader Douglas Ross asked whether the ‘technical issues were that the bins are overflowing, there’s rats in the streets and some of your employees have been taken to hospital while collecting that rubbish?’

Ms Aitken denied that was the case, although she later admitted that there have been ‘small incidents’ where rubbish collectors had been taken to hospital after ‘very minor contact with a rat’.

The rows over rubbish came amid fears that train worker strikes could cause significant disruption during the summit.

There are reports that thousands of delegates were unable to find accommodation in Glasgow and intend to travel by train from neighbouring cities.

Time magazine reported that as early as January this year hotels were hiking prices for November to 500 per cent of normal levels.

Scotland’s transport minister Graeme Dey said this morning the ‘signs are not optimistic’ in preventing ScotRail staff from going on strike during COP26.

The country is just days away from potential industrial action on Scotland’s railways due to an ongoing dispute over pay and conditions. 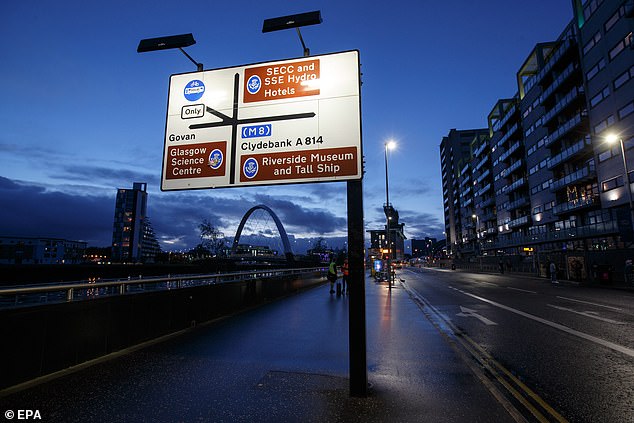 The RMT rail union, which represents ScotRail workers who are planning to strike, said the latest pay offer was ‘pitiful.’

Speaking about the potential strikes on BBC’s Good Morning Scotland programme, Mr Dey said: ‘This is a situation that we have tried extremely hard to avoid.

‘We find ourselves in a perplexing and deeply disappointing situation.’

The RMT said ‘a gun is being pointed at its head’ after a Wednesday deadline was set for accepting a recent pay offer.

Mr Dey said with the country less than a week away from the climate change summit, the Scottish Government has had to focus on making alternate travel plans if the offer is not accepted by tomorrow.

Rail services in Scotland have been crippled for months by strike action, with few trains running on Sundays. Three other unions have since settled their disputes with ScotRail.

The daily test positivity rate was 10.3 per cent, up from 9.9 per cent the previous day. 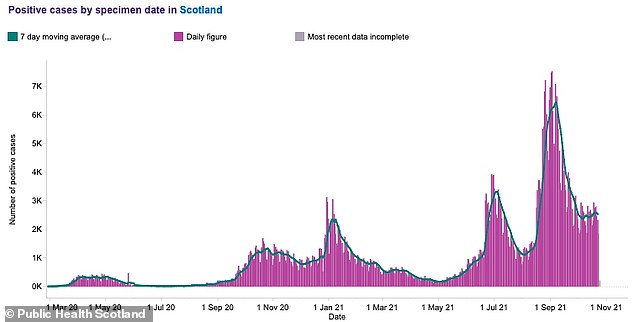 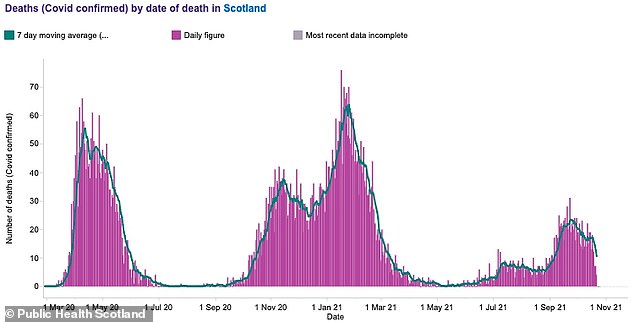 There were 902 people in hospital in Scotland on Sunday with recently confirmed Covid-19, up three in 24 hours, with 57 in intensive care, down one.

Asked yesterday about the state of Glasgow as it prepares to host COP26, Ms Sturgeon said: ‘I think there are challenges in Glasgow and challenges in cities across Scotland, the UK, the world – some of them related to Covid, some of them more fundamental than that.

‘I’m not going to stand here and say they don’t exist in Glasgow. I think Glasgow is ready for COP26.

‘Glasgow – as it has been with big events in past years – will be an excellent host for COP26, and that’s important.

‘But – as all countries do – we have challenges in our public services and how we make sure they’re delivering in the post-Covid era.’