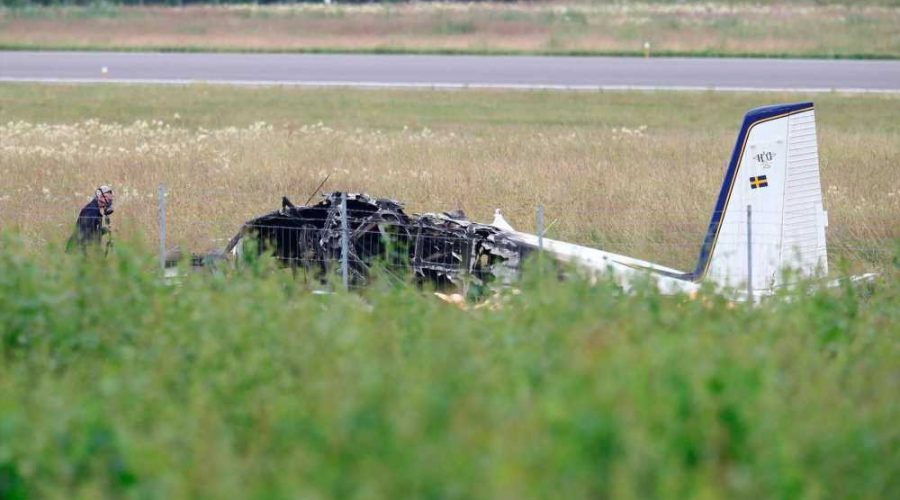 A small plane carrying a group of skydivers crashed this week in Sweden, killing all nine people on board, police said.

The single-engine plane, a DHC-2 Beaver, crashed close to the runway and burst into flames shortly after takeoff at Orebro airport on Thursday night, police said.

“It’s a very severe accident. Everyone on board the crashed plane has died,” police said on their site.

The plane had been carrying the pilot and eight passengers, who were members of a local skydiving club, according to police and Orebro County Governor Maria Larsson.

No official cause for the crash has been determined, but officials said that “something happened in the middle of the runway.”

“The plane didn’t get up very high before it went down to the left of the runaway,” Peter Swaffer, a department head at the Swedish Accident Investigation Authority, told daily newspaper Aftonbladet.

Swedish Maritime Administration spokesman Carl-Johan Linde said the crash must have occurred “in connection” with the plane’s takeoff.

Deputy regional police chief Niclas Hallgren said Friday that they were notified about the crash shortly before 7:30 p.m. and quickly knew that it was a “very serious incident.”

Hallgren said investigating the crash would be “a difficult job” and “will take its time.”

Prime Minister Stefan Lofven said it was with “great sadness and dismay” that he learned of the accident.

“My thoughts are with the victims, their families and loved ones in this very difficult time,” he wrote on Twitter.