Equipment from California’s largest utility company, Pacific Gas & Electric Co. (PG&E), sparked two fires in the northern part of the state last weekend even as the company shut off power to residents in the area to avoid the risk of fire, according to a report.

The Bethel Island and Oakley fires — in the San Francisco Bay Area — started in an area where the company left the power on because it was not seen as a high fire risk, CNBC reported.

Fire officials from the East Contra Costa Fire Protection District said Wednesday that the fires, which prompted evacuations over the weekend, sparked underneath PG&E powerlines and a video obtained by investigators showed the sparks landing on brush, according to CNBC.

Both of the fires are now out, the Bay Area's FOX 2 reported. 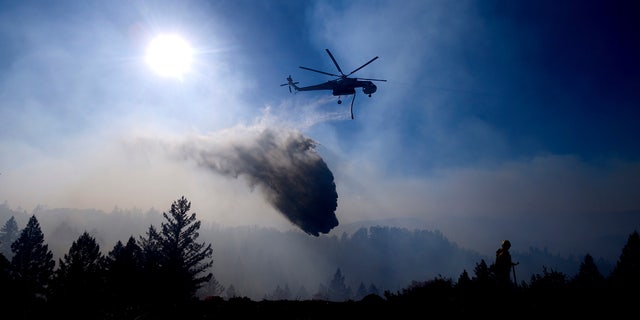 A helicopter drops water while battling the Kincade Fire near Healdsburg, Calif., on Tuesday, Oct. 29, 2019. Millions of people have been without power for days as fire crews race to contain two major wind-whipped blazes that have destroyed dozens of homes at both ends of the state: in Sonoma County wine country and in the hills of Los Angeles. (Associated Press)

PG&E has deliberately shut off power to millions of residents across the state over the last few weeks in an effort to mitigate the threat of wildfire caused by their equipment during a period of hot, dry weather and high winds.

The company admitted last week that it may be to blame for the widespread Kincade Fire in Sonoma County, north of San Francisco, after a broken wire belonging to the company was found near where the fire sparked. The fire has burned more than 76,000 acres and prompted thousands of evacuations.

Officials revealed Tuesday the Getty Fire was caused when a dry branch from a eucalyptus tree was flung 30 feet by high winds into a city Department of Water and Power line, which short-circuited and sparked, the utility and Fire Department announced Tuesday. The power line had been operating safely and the DWP had cut away brush and trees from around the line, officials said.

Southern California Edison, another utility company in the state, admitted that they may have been to blame for last year’s Woolsey Fire in Los Angeles and Ventura County that killed three people.