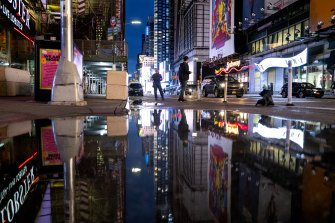 The lights of Times Square in New York are reflected in water on Thursday after Hurricane Ida left behind severe flooding.Credit:AP

Recovery efforts were under way early on Thursday to bring back transportation systems serving millions of residents in the densely populated metropolitan area.

New York Governor Kathy Hochul urged commuters to stay home from work and pleaded for patience while train services were being restored.

“This is one for the record books,” Hochul told CNN.

The storm dumped between 5 and 7.6 centimetres of rain per hour along the Philadelphia to New York City corridor, the National Weather Service said.

At least one person was killed as the flooding inundated the New Jersey city of Passaic, Mayor Hector Lora told CNN.

Lora said the body of a man in his 70s was retrieved from floodwaters after the vehicle he had been riding in was swept away.

The governors of New York and New Jersey declared a state of emergency late on Wednesday.

All non-emergency vehicles were banned from New York City’s streets until 5am (local time) on Thursday due to the weather.

At least five flash flood emergencies were issued on Wednesday evening by the National Weather Service, stretching from west of Philadelphia through northern New Jersey.

All New Jersey Transit rail services apart from the Atlantic City Rail Line were suspended, the service said on its website. 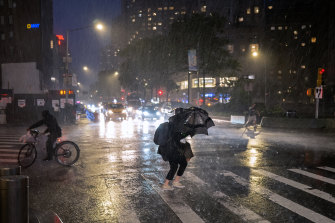 Tornadoes spawned by the storm ripped through parts of Pennsylvania and New Jersey.

More than 200,000 electricity customers were without power early on Thursday in five north-eastern states, including Pennsylvania and New Jersey, according to PowerOutage.US, which gathers data from utility companies. There were also outages in New York, Connecticut and Massachusetts, it said.

02/09/2021 World News Comments Off on ‘One for the record books’: Floods sweep through New York in Ida’s wake
Lifestyle