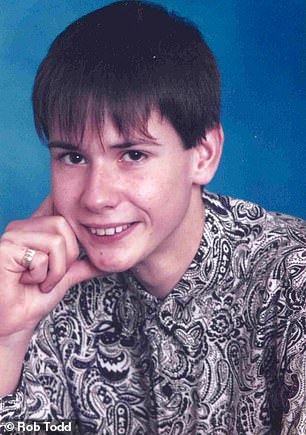 Christopher Fowle, pictured, died aged 22 in 1996 after being infected with HIV from contaminated blood as a baby during the 1980s

A husband and wife whose young son was infected with HIV from contaminated blood products and died aged 22 have told an inquiry time will never heal their pain.

Alan and Christine Fowle said their son Christopher was diagnosed with severe haemophilia when he was a baby and was treated with contaminated blood products during the 1980s.

The Infected Blood Inquiry heard that Christopher was diagnosed with HIV when he was nine or 10 years old, and died the day after his 22nd birthday in 1996.

In a statement read out to the inquiry on Wednesday the couple said that time will never heal their pain.

They added: ‘Christopher should never have lost his life. He was our only son.

‘We have been denied seeing him get married, have children, travel, and most of all, sharing our lives with him as we get old.

‘We don’t think time will heal our pain because we forever think about what might have been.’

The inquiry heard the family had been left ‘devastated’ by Christopher’s diagnosis, with doctors expecting him to live for another 12 years.

The couple said: ‘We were devastated because our son was an innocent nine-year-old.

‘His life is going to be cut short because we was treated with blood products that were not safe.’

Giving evidence on Wednesday the couple said they had placed their ‘faith in the professional judgment’ of the doctors that they would not give their son something unsafe. 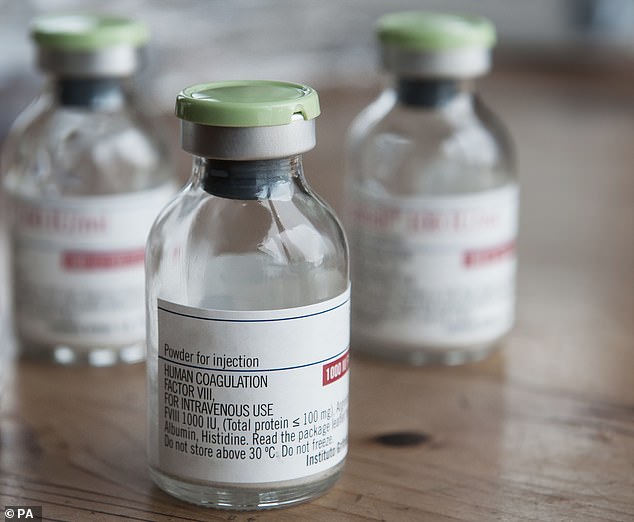 His devastated parents, Alan and Christine, have told of their pain, saying: ‘We don’t think time will heal our pain because we forever think about what might have been’ (file photo)

But Mrs Fowle, 74, said that they now believe that health leaders knew the risks of buying blood products from abroad.

She added: ‘I believe, we all believe, that the government or health service, someone, knew the risks of buying blood from America.

‘I honestly do believe that.’

It is ‘inconceivable’ that great numbers of people with an inherited blood condition will not have been infected by the contaminated blood scandal, the inquiry’s chair has warned.

Former High Court judge Sir Brian Langstaff told the Infected Blood inquiry that people living with thalassaemia who had blood transfusions in the 1970s, 1980s and early 1990s may have contracted hepatitis C and not know it.

Thalassaemia is an inherited condition which can lead to a person producing either no or too little haemoglobin and requires life-long treatment with blood transfusions and medication.

Sir Brian said the knowledge they could have been infected and can get tested and treated may give them ‘life-saving’ assistance.

He added: ‘We think it is inconceivable that because those who suffer from thalassaemia have regularly got to have transfusions and did so during the 1970s, 1980s, into the 1990s, that they will not have suffered from hepatitis C in great numbers and if they do and have not been tested they may wish to know that, and know that they can be treated.

‘The knowledge that they might have been infected by regular transfusions during those years would be potentially of assistance, maybe even life-saving assistance for them.’

His comments came after a witness told the inquiry he had been infected with hepatitis C following regular blood transfusions for his thalassaemia.

The couple were giving evidence during the second week of the Infected Blood Inquiry at Fleetbank House in central London.

The contaminated blood scandal has been labelled the worst treatment disaster in the history of the NHS.

Thousands of patients were infected with HIV and hepatitis C via contaminated blood products in the 1970s and 1980s.

Two previous inquiries have been branded a whitewash by campaigners.

The inquiry is chaired by former High Court judge Sir Brian Langstaff who has promised to put people at the heart of the probe.

Mr Fowle, 76, said his son had been passionate about remote controlled cars and he used to take him across the country and abroad to race them.

She added: ‘It was something he could get very excited and passionate about.

‘It was not like contact sports which he couldn’t do. For about four or five years it became his passion.’

The couple said they told their son about his condition when he was 15 but Mrs Fowle said she did not think he understood the full consequences.

Christopher, who was also infected with hepatitis C, left school at 15 and did some work for his father’s firm, the inquiry heard.

But Mrs Fowle said her son lost interest in doing anything constructive with his life.

She added: ‘He was angry, he lost interest in, not in living as such, but in doing anything constructive with his life. He lost his purpose.’

The couple said their son’s health began to deteriorate, he lost weight, had two bouts of pneumonia and developed ‘horrible’ ulcers on his legs which became infected.

Mrs Fowle said she gave up work to look after him and district nurses would regularly visit, with one telling the family Christopher had told them he had the ‘most brilliant parents’.

After the inquiry hears from victims in central London, there will be similar testimonies take place over the coming months in Belfast, Leeds, Edinburgh and Cardiff.