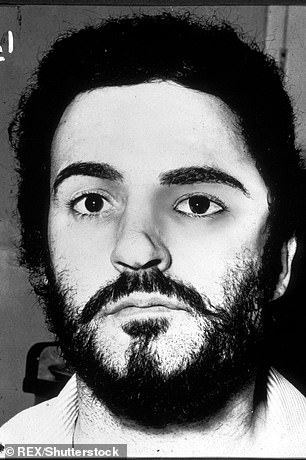 Yorkshire Ripper Peter Sutcliffe has been banned by prison staff from sending romantic letters to a new love interest.

The serial killer has been desperately trying to get in touch with the woman, who has confessed her love for him, all summer.

She claims the Ripper called her his ‘darling girl’ and told her he loved her.

However prison staff have barred him from sending letters, returning the mail to his cell in HMP Frankland, County Durham.

He’s currently serving a whole life order, after being convicted in 1981 of murdering 13 women and trying to kill seven others.

Prison chiefs have previously stopped the Ripper corresponding with women to protect their mental health.

A source said many women create shrines to the murderer and it is ‘not healthy’ for them to be in contact.

Last year, Sutcliffe dumped his American cheerleader girlfriend Krystal Smith, who was 28 at the time, telling her to find someone younger.

It appears this woman could be his new love interest.

Sutcliffe, 74, sent several letters to a penpal to try and send a message to his possible lover.

In a letter dated July 6, he said: ‘As I’m not allowed to contact her anymore, I wondered if you might drop her a line to let her know my letters have been returned to me.

‘These people haven’t let her know.

‘Tell her you’ve been my dear friend for the past 36 years.’ 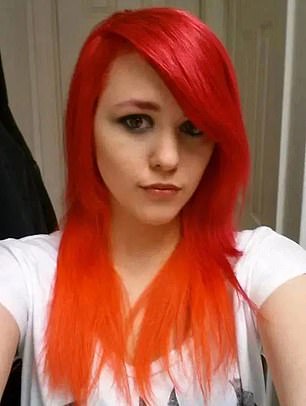 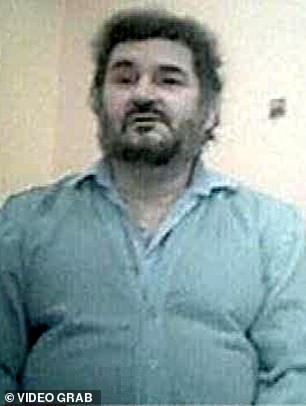 Last year, Sutcliffe, pictured right in 2010, dumped his American cheerleader girlfriend Krystal Smith, pictured left, who was 28 at the time, telling her to find someone younger 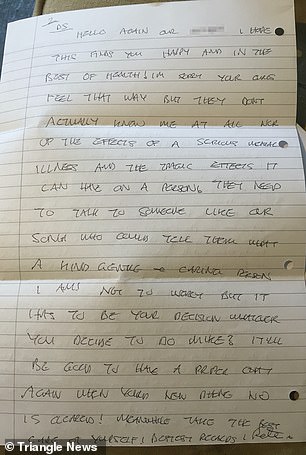 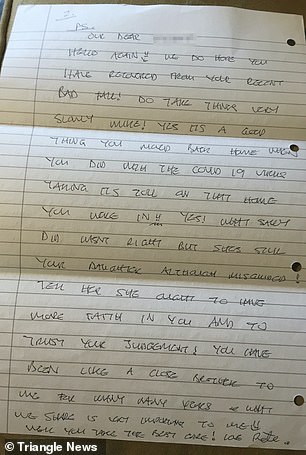 In previous letters to a pen pal – who he’s been corresponding with since 1988 – Sutcliffe described himself as ‘kind, gentle and caring’ and described the friend as being ‘like a close brother to me’ 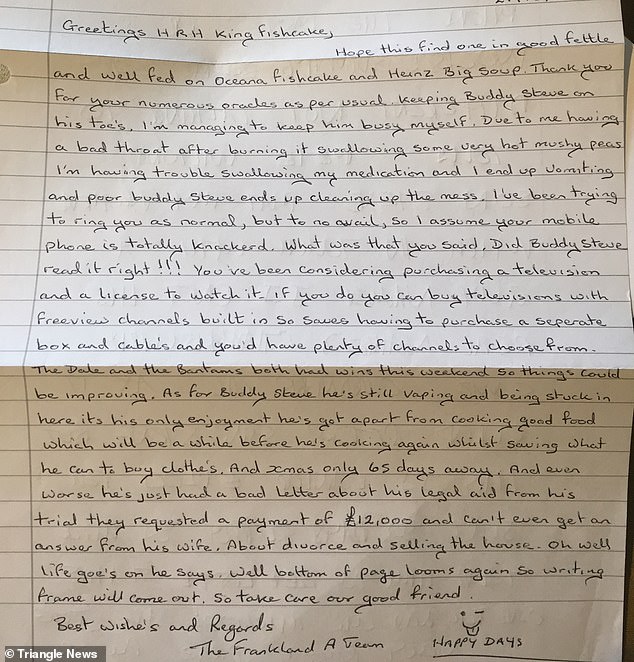 In another letter, he told how he could not stop vomiting after he burned his mouth eating mushy peas

On July 13, the Ripper wrote: ‘I hope you manage to get a letter off to her as she will be puzzled and upset.

‘I’ve known her for the past six and a half years, long before I left Broadmoor.’

In another letter, dated August 4, he said: ‘I take it you still haven’t had word from her?

‘I appreciate you making the effort as she doesn’t know what’s been going on.’

Letters from the Ripper’s love interest to his penpal show the nature of their relationship.

She said: ‘He even called me his darling girl and said on many letters: ‘I love you.’

‘He has had girlfriend after girlfriend and when it’s gone wrong I have always been there and loyal for Pete.’

She revealed the serial killer would send teddies and Valentines Cards to her.

The woman said ever since he had started dating Krystal Smith, Sutcliffe had gone quiet.

However now they have broken up he appears desperate to get back in touch.

Sutcliffe was named the Yorkshire Ripper, due to his gruesome crimes in the county which mainly targeted prostitutes. 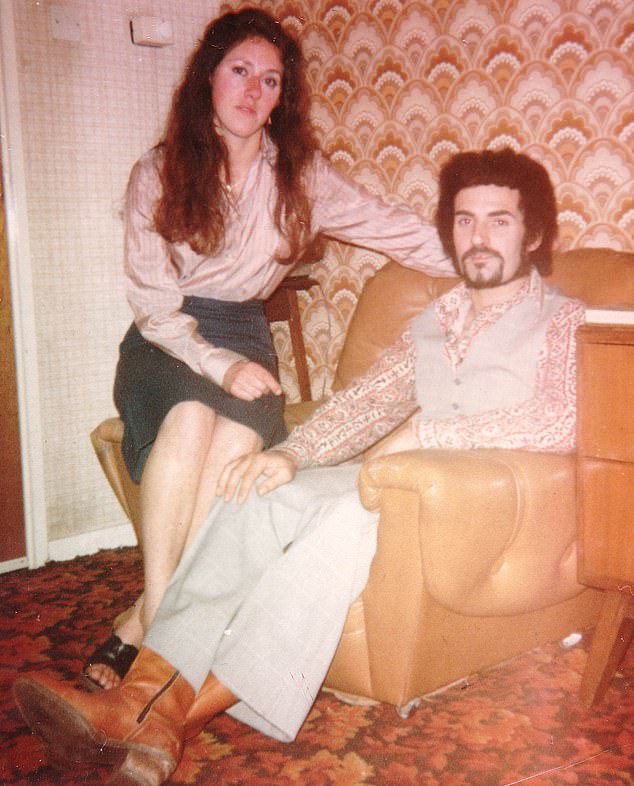 Letters also revealed the twisted murderer is still desperately trying to arrange a video call with ex-wife Sonia, pictured together

Peter Sutcliffe, the Yorkshire Ripper, received 20 concurrent life sentences for his attacks and the murder of 13 women. (Pictured) Sutcliffe on his wedding day on August 10, 1974 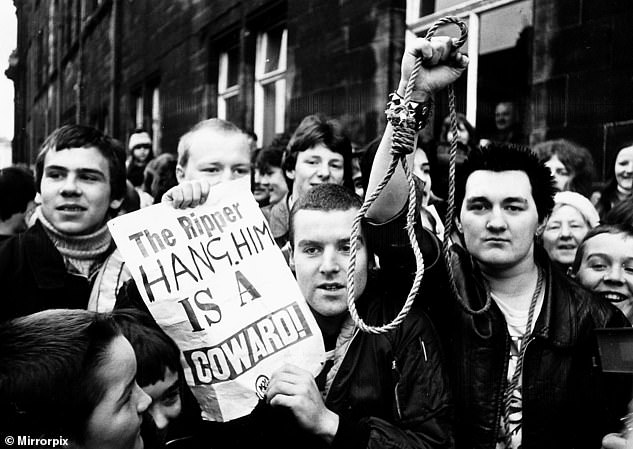 However in letters to a pen pal – who he’s been corresponding with since 1988 – he described himself as ‘kind, gentle and caring’.

Sutcliffe has grown close with the man – who wishes to remain anonymous.

The Ripper in a letter said: ‘You have been like a close brother to me for many years and what we share is very important to me.’

The man – who has written letters to hundreds of famous people – said: ‘It has been a very enjoyable hobby for me for some time.

‘I have been told I am his best friend.

‘It concerns me very much what he has done.

‘But I am a forgiving person, as a Christian, and that is what humans are supposed to do.

‘As hard as it is, and some people have committed unspeakably evil acts, we have to try and forgive.’

The Ripper dictates most of the letters to a lag pal, who writes them up for him.

They describe themselves as the ‘Frankland A Team’.

In 1997, Sutcliffe was attacked by a fellow inmate and lost most of his eyesight.

This means he can only write a few lines of the letter – and his handwriting is poor.

The Ministry of Justice has been contacted for comment.

THE YORKSHIRE RIPPER’S REIGN OF TERROR: A TIMELINE OF HIS MURDERS

Sutcliffe, who lived in Bradford, West Yorkshire, believed he was on a ‘mission from God’ to kill prostitutes, although not all his victims were.

His other victims, aged between 16 and 47, included two university students, a civil servant, a bank clerk and a supermarket worker.

Sutcliffe was dubbed the Yorkshire Ripper because he mutilated his victims using a screw driver, hammer and knife.

He was also convicted of seven counts of attempted murder in and around Yorkshire, Lancashire and Greater Manchester.

Summer 1975: Peter Sutcliffe begins attacking women, two in Keighley and one in Halifax. All three survive and police do not link the attacks.

30 October 1975: Sutcliffe carries out his first fatal attack on Wilma McCann, a 28-year-old prostitute from the Chapeltown district of Leeds.

5 February 1977: He kills Irene Richardson, 28, another prostitute from Leeds.

26 June 1977: The case comes to the attention of the national press after Sutcliffe murders Jayne MacDonald, a 16-year-old shop assistant. The murder, and the realisation that a serial killer is on the loose in Yorkshire, shocks the country.

The attacker is dubbed the Yorkshire Ripper by the press, and West Yorkshire Chief Constable Ronald Gregory appoints his most senior detective, Assistant Chief Constable George Oldfield, to investigate the murders.

1 October 1977: Sutcliffe chooses Manchester for his next attack – on Jean Jordan, 20. He dumps her body on an allotment and throws her bag, containing a brand new £5 note he gave her, into nearby shrubs.

Police find the bag and trace the serial number on the note back to the payroll of Yorkshire hauliers T and W H Clark, who employ Peter Sutcliffe.

Sutcliffe is interviewed by police but provides an alibi placing him at a party.

June 1979: A tape is sent to police by a man calling himself Jack the Ripper, who has already sent a series of hand-written letters from Sunderland. Assistant Chief Constable Oldfield mistakenly decides that these are the work of the Ripper. Wearside Jack, as he becomes known, is pinpointed to the Castletown district of Sunderland by voice experts. Detectives are told they can discount suspects who do not have a Wearside accent.

July 1979: Police interview Sutcliffe for the fifth time. Detective Constables Andrew Laptew and Graham Greenwood are suspicious but their report is filed because his voice and handwriting do not fit the letters and tape.

2 October 1979: A £1million campaign is launched to catch the Yorkshire Ripper.

20 August 1980: The Ripper claims another victim, Marguerite Walls, 47, from Leeds, followed by Jacqueline Hill, 20, a Leeds University student, on November 17.

3 January 1981: Sutcliffe admits he is the Yorkshire Ripper after police arrest him with a prostitute. Police admit the killer does not have a Wearside accent.

22 May 1981: Sutcliffe is jailed for life at the Old Bailey. The judge recommends a minimum sentence of 30 years. He is transferred to Broadmoor secure hospital in Berkshire in 1984.

21 March 2006: John Humble, a former builder, is sentenced to eight years in prison after he admits to being the Yorkshire Ripper hoaxer known as Wearside Jack.

1 June 2006: A report which has been kept secret for nearly 25 years reveals that Sutcliffe probably committed more crimes than the 13 murders and seven attempted murders for which he was convicted.

April 2017: Sutcliffe is questioned by police officers over 17 unsolved cases that bear similarities to his past crimes. He is not being investigated over any murders and it is unknown which of the incidents police think are linked to the serial killer.