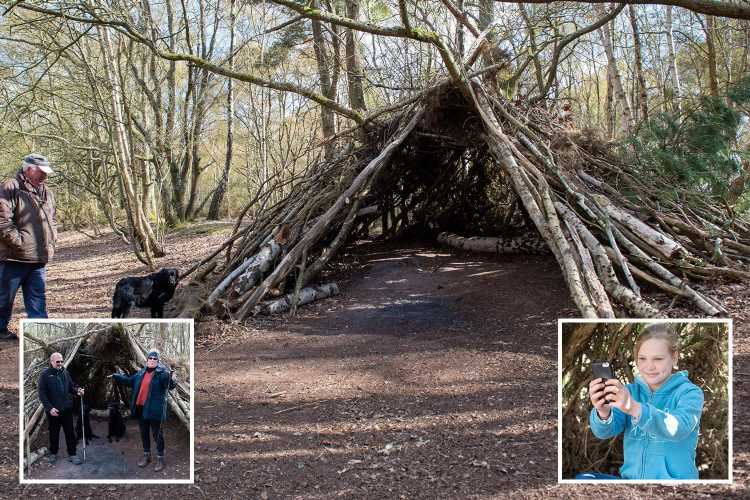 "PETTY" council bureaucrats have torn down decorations and a sign on a three-year-old's woodland den – because the name isn't inclusive enough.

Charlie Smith's grandfather Alan, 60, built the fort from sticks and branches in June 2020, for the toddler and his sister Molly, one. 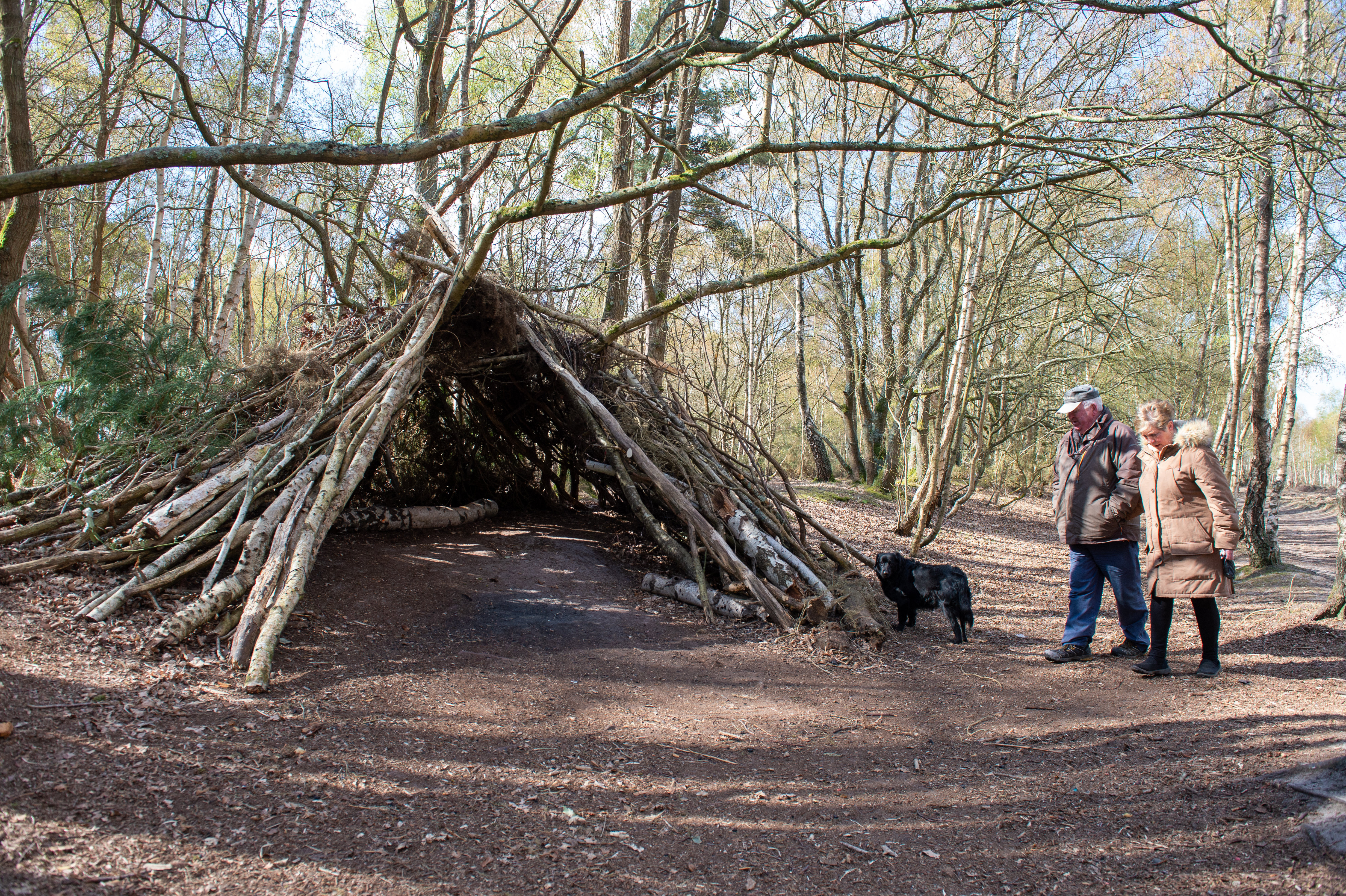 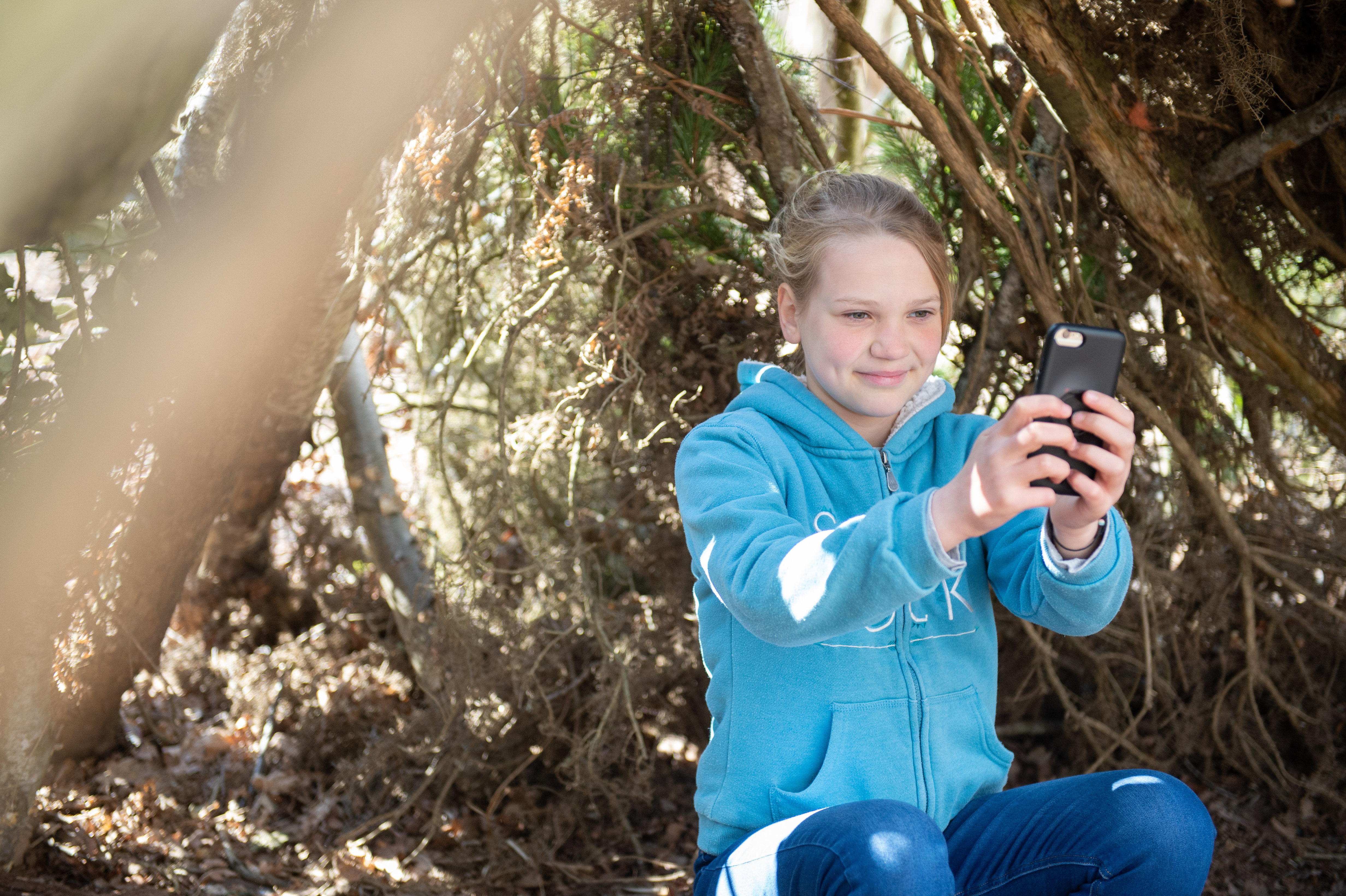 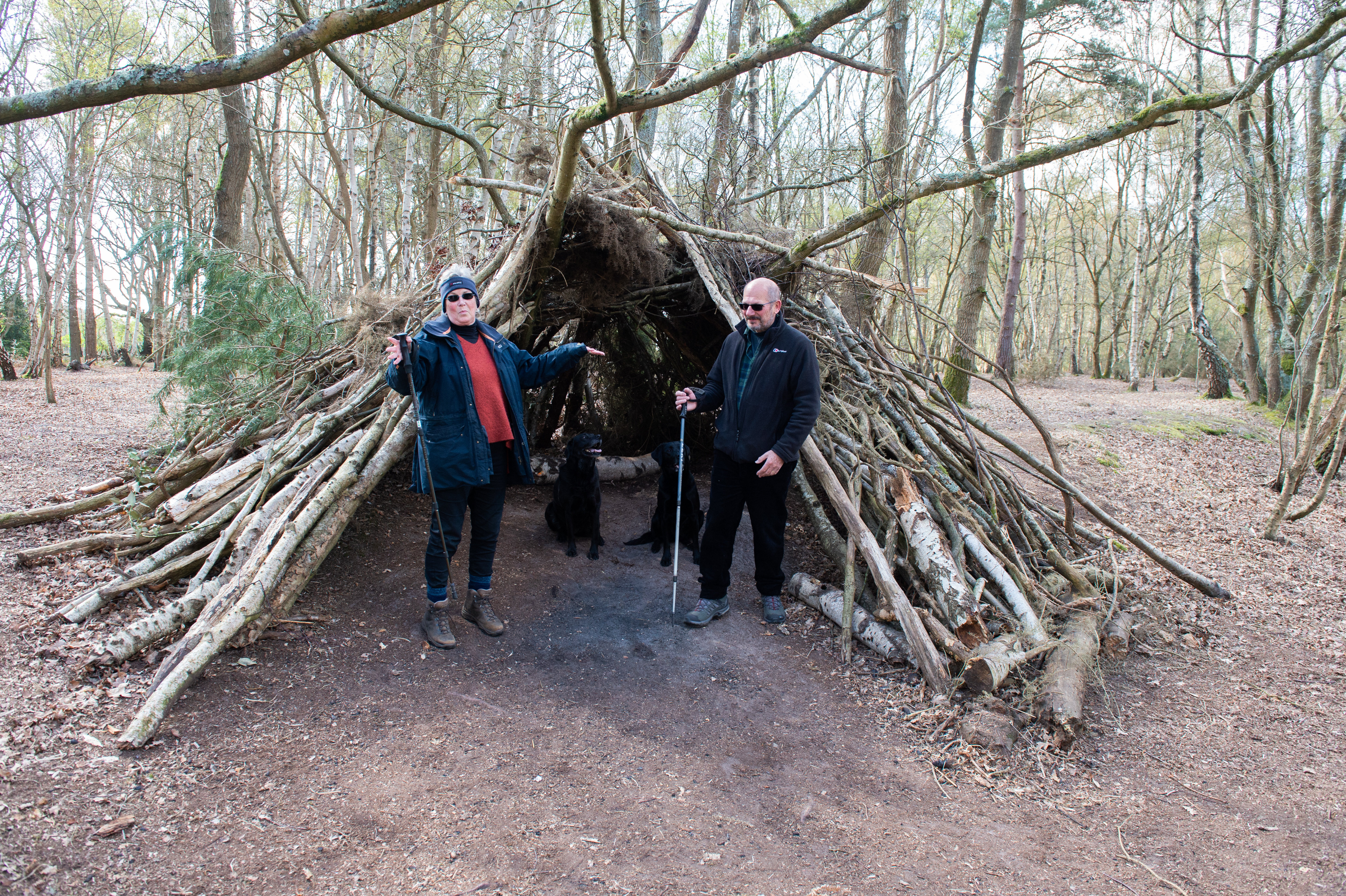 The kids and their pals visit the mini hide out on the side of Whitmoor Common near Guildford in Surrey during their daily walks.

But the family were contacted by the council and asked to remove the handmade decorations from inside because they weren't biodegradable.

And when the family didn't comply, council workers cleared out the den – and then left a note outside saying even painted wooden decorations had to go to, they claim.

It was followed by an email from Surrey County Council officers demanding they must remove the wooden plank sign above the entrance which said "Charlie's Den".

Land protection officers said it "suggests a degree of ownership which may deter others from playing".

Charlie's family blasted the "petty" council who have apparently now taken the sign and children's decorations away.

Charlie's aunt Stephanie Smith, 24, said: "It's awful for him, every time he goes up there you don't know what to expect.

"He's done all these painted logs and they've been taken down, and he can't have them because they're just not telling us.

"He's more confused of why, you can't really explain to him he's only three, so he's just confused as to why they've been taken down.

"If he's up there and he sees other kids he says come in here, come see my den.

"It's about a five minute walk from our house, he goes up there every day with my mum to see it."

The family put up decorations for celebrations throughout the year, including Halloween, Christmas, Easter and Valentine's Day.

But council members have contacted them directly asking for them to be removed, and twice eventually removed them themselves.

Charlie's aunt Stephanie said: "We put sweets in there for Halloween, and mum went up there every day to make sure nothing was left there.

"We live on the common, the last thing we want is there to be litter everywhere."

Grandmother Tina Smith, 56, said "We arranged a Halloween trail for kids to do during the school holidays and many children did this before the 31st.

"But then on the morning of the 31st I had a message saying a lady had removed the decorations.

"When I messaged to ask why she said it was a danger to the wildlife and if she had had enough bags she would have destroyed the den."

Surrey County Council informed them afterwards that they were happy with the den, but everything inside had to be environmentally-friendly, she claims.

The Smith family then decorated the tepee-like structure for Christmas and ensured every addition was biodegradable.

Charlie and his little sister had painted some tree stumps to make their hideaway more festive.

But a couple of weeks later, a sign was put up outside the den again demanding the their work to be removed, they said.

Tina said: "All decorations were made out of wood and not dangerous at all.

"I then decorated the den for Easter and then couple of days ago got an email from Surrey County Council to remove the decorations and also to take sign away as apparently people claimed it showed ownership of the den and other children didn't like it.

"I have had hundreds of messages and people have posted photos of their children and animals at the den."

The Countryside Land Protection Officer for Surrey County Council told Tina the sign had become a "point of contention".

In an email to Tina, he said: "It is clearly a 'man-made' product, despite the fact that it is predominantly made of wood, and it will not be allowed to remain on site.

"I suggest that you bring the sign with you for Charlie to play with when he is on site and remove it again when you leave.

"As has been suggested by some complainants, to leave it on site suggests a degree of ownership, which may deter others from playing at the location.

"The sign and any other decorations must be removed immediately.

"Any items left on site will be removed by this department and you will then need to take possession of them from our offices in Merrow.

"Items not collected within a reasonable time will be destroyed."

Council members had removed the decorations and the sign themselves on Friday morning, the family said.

But the den – which even has its own location marker on Google Maps – is still standing.

Admin assistant Stephanie, who lives close to her mum, sister and nephew, says that she and other residents feel the council should be tackling larger problems.

She said: "I just want to get it out there that there's other things they could be looking into – bins overflowing, poo bags everywhere.

"But they're so focused on decorations in a den that are being looked at every day.

Tina said: "It's just the fact that it's so petty – it's a den that's got decorations.

"There's a tree that gets decorated every year with baubles and little pretend presents and there was no complaints about that."

A spokesman for Surrey County Council said: "We really did not want to discourage young people from enjoying the great outdoors in this way.

"The den is great, and a perfect way to escape in imagination.

"But we must give warning if we need to remove any materials that are not natural to the surroundings, we would never dismantle the actual structure unless it posed a danger.

"Judging the structural integrity and wonderful craftsmanship of this example, we certainly won't be taking it down." 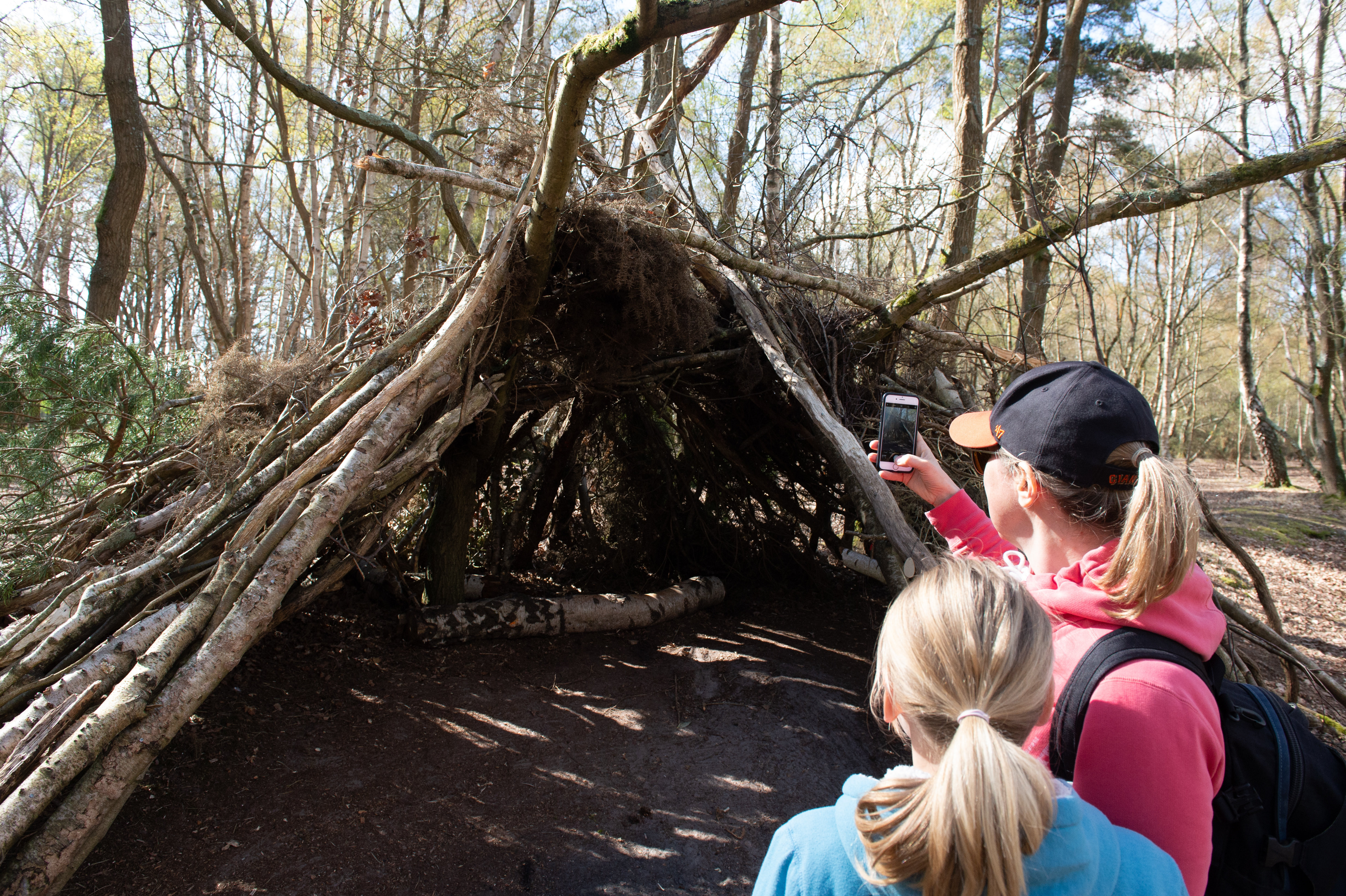