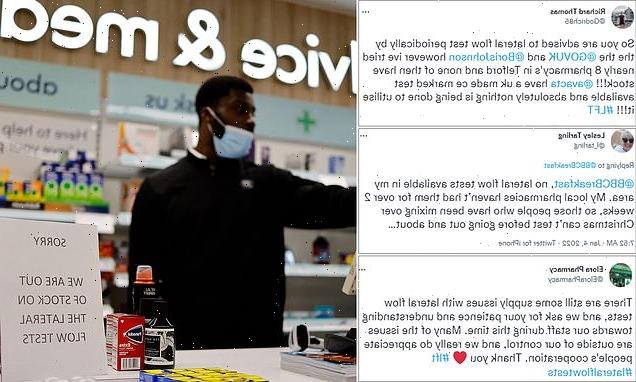 Pharmacy staff are facing a wave of abuse from frustrated customers who are still unable to get their hands on free lateral flow tests, a health industry chief has today warned.

Some Britons claim they have been unable to get hold of lateral flow tests at their local pharmacies for up to ‘two weeks’ due to a nationwide shortage of the swab tests.

The issue – sparked by supply and distribution problems in the Government’s free testing programme – has led to people being unable to order tests online at times.

Some pharmacies have been forced to put up signs warning customers they have no more free tests because of the shortages.

But with supplies still said to be ‘patchy’, pharmacy bosses are warning that staff are facing ‘unfair’ and ‘abusive’ behaviour by customers, who are still unable to get hold of tests.

Pharmacists have previously pointed the finger of  blame at the Government’s test provider after it emerged the firm ‘closed down for Christmas’ after receiving 2.5million tests to be handed out to pharmacies.

Speaking about the situation, Dr Leyla Hannbeck, Chief Executive of the Association of Independent Multiple Pharmacies, told MailOnline: ‘Up until yesterday the supply to pharmacies were still patchy. 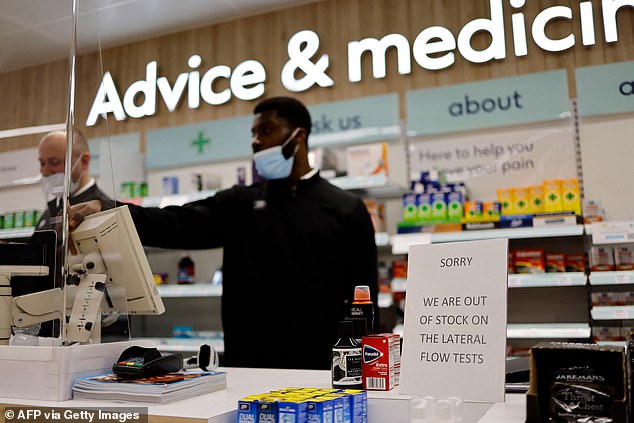 Some pharmacies have been forced to put up signs warning customers they have no more free tests because of the shortages (pictured: Library image)

‘The past few days the situation has not improved. The demand is still very high now because the governments guidelines put a lot of emphasis on testing as a key out of self isolation, so naturally as Omicron cases are high people are reliant on tests to get on with daily life.

‘Pharmacies are having to put up with a lot of abuse and aggressive behaviours by members of the public because of this situation which is unfair.’

She added: ‘They are very accessible and also in hard to reach communities — and for people who cannot go online such as the elderly and those who don’t have access to internet pharmacies are the best option. 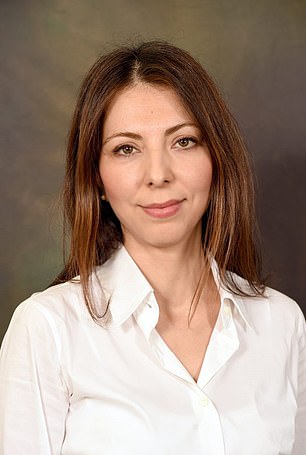 Speaking about the situation, Dr Leyla Hannbeck, Chief Executive of the Association of Independent Multiple Pharmacies, told MailOnline: ‘Up until yesterday the supply to pharmacies were still patchy.

‘In addition, we can monitor the supply in that we can ensure controlled supply.’

Yesterday it emerged that the company given sole responsibility for distributing lateral flow tests to pharmacies by the Government shut down for four days over the festive period – just after it received 2.5 million tests.

Pharmacists have blamed Alliance Healthcare for being verbally abused after they ‘closed down for Christmas’.

The boss of the company supplying lateral flow Covid tests refused to comment because he just came back from holiday.

Pablo Rivas, who runs Alliance Healthcare UK, the sole distributor of LFTs to pharmacies around the country, said he did not know about the testing crisis because he had just returned from ‘somewhere nice’.

Asked if the Government were aware that the firm had planned to close for some of the festive period, he said all enquiries had to go through the press office, but he added: ‘I just came back from holiday so I really don’t know that much at the moment. We are having to quarantine now.’

A spokesman for Alliance Healthcare later confirmed that the Government were aware that the company intended to shut down for four days on December 25.

An Alliance Healthcare spokesperson said: ‘Alliance Healthcare published its Christmas Bank Holiday opening hours on its website on 26 November. The UKHSA were aware of the planned closure and the PSNC communicated out multiple times to pharmacies. 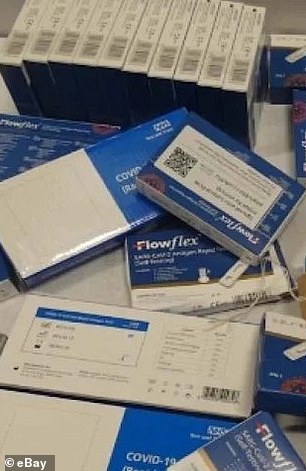 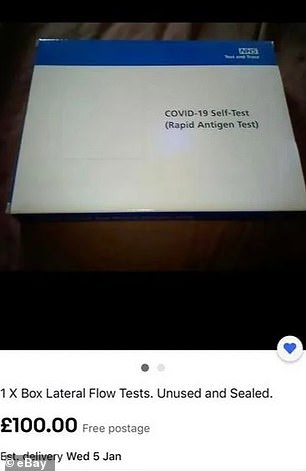 Millions of people have been struggling to get LFTs online – but some have trying to sell the packs given them to free by the Government, all paid for by the taxpayer

‘During the week commencing 20 December, Alliance Healthcare distributed around 9 million lateral flow tests to community pharmacies in the UK. Of these nearly half were delivered on the pharmacy’s next delivery (Alliance Healthcare delivers lateral flow tests as part of its daily delivery service) and the rest delivered over the following 2 days, all within the 72-hour delivery time agreed with the UKHSA. 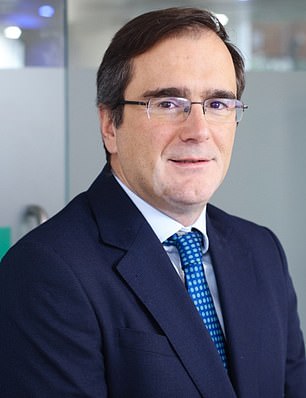 Pablo Rivas, who is Chief Operating Officer at Alliance Healthcare UK, the sole distributor of LFTs to pharmacies around the country, said he did not know about the testing crisis because he had just returned from ‘somewhere nice’

‘Alliance Healthcare resumed distribution on 29 December when community pharmacies, the majority of which were also closed over the Christmas period, re-opened and a further 2 million lateral flow tests have since been distributed.

It comes as Britons today continued to face issues in getting hold of lateral flow testst.

One claimed she had been unable to access a test for ‘over two weeks. Lesley Tarling wrote on Twitter: ‘No lateral flow test available in my area.

‘My local pharmacies haven’t had them for over two weeks, so those people who have been mixing over Christmas can’t test before going out and about.’

Another Twitter user wrote: ‘So you are advised to lateral flow test periodically by the Government and Boris Johnson, however I’ve tried nearly eight pharmacies in Telford and none of htem have stock!

One pharmacy, Elora Pharmacy, in Benfleet, Essex, also urged customers to be understanding with its staffing, writing on Twitter: ‘There are still some supply issues with lateral flow tests, and we ask for your patience and understanding towards our staff at this time.

‘Many of the issues are outside of our control and we really do appreciate people’s co-operation. Thank you.’ 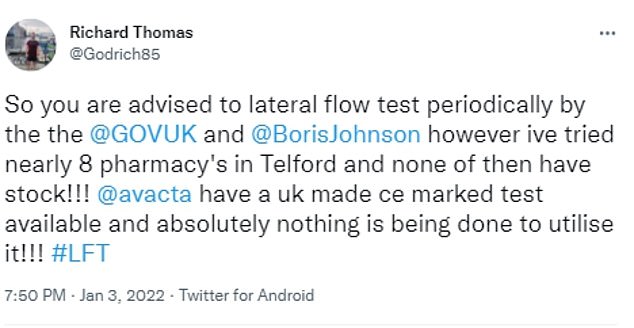 It comes as it emerged yesterday that eBay profiteers are trying to cash in on the crisis by selling packs of seven NHS tests for £100 on the eve of the reopening of schools and the nation heading back to work.

Supplies of Covid tests meanwhile are likely to be rationed over the next fortnight as health officials struggle to cope with ‘huge demand’, Sajid Javid admitted.

The health secretary warned in a letter to MPs that tests will need to be prioritised for ‘vulnerable groups’, such as care home residents and staff.

But there are fears the supply problems could hit the economy if workers are unable to get the tests they need to leave quarantine early.

Medical unions revealed doctors and nurses are among those struggling to access tests as they called for them to be pushed to the front of the queue in a bid to avert an NHS staffing crisis.

Mr Javid plans to use 900million lateral flow devices (LFDs) this winter in an attempt to keep the virus under control, staff in work and businesses open.

The UK Health Security Agency doubled deliveries of LFDs from 120million to almost 300million in December.

And the government will triple supplies for January and February from an anticipated 100million to 300million per month.

‘This has inevitably placed strain on the testing system, despite the impressive scaling-up of supply, logistics and laboratory capacity. Other countries have faced similar challenges.’

He added: ‘We are constantly reviewing system performance and ways to maximise its response to the demand for tests.

‘However, in light of the huge demand for LFDs seen over the last three weeks, we expect to need to constrain the system at certain points over the next two weeks to manage supply over the course of each day, with new tranches of supply released regularly throughout each day.

‘We will continue making tests available to everyone who needs them, particularly vulnerable groups such as care home residents and those who work in critical sectors such as the care workforce.’

The UK Health Security Agency has previously stressed there was no issue with supply, instead blaming logistical problems, including difficulties shipping so many tests from its warehouses.

But outlining plans for the months ahead, Mr Javid said: ‘To respond to anticipated demand over the coming few weeks we are buying hundreds of millions more LFD tests, bringing new products on board and accelerating their deployment to the public.

‘We are also doubling our total delivery capacity with Royal Mail to 900,000 test packs and PCR tests a day.

‘We are tripling the supply of LFDs in January and February from our pre-omicron plan of 100 million to 300 million per month.’

Mr Javid said that the Government’s daily PCR capacity had been increased from 530,000 per day in November to 700,000 per day now, excluding those for NHS patients and staff.

He also stressed the UK is providing tests free of charge for people with or without symptoms, unlike many other countries.