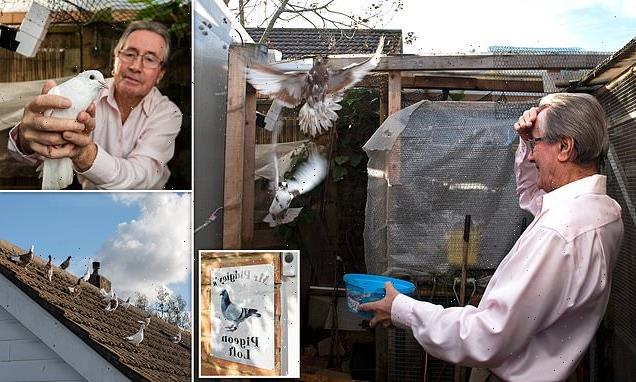 Pigeon-keeper, 70, is fined nearly £1,000 after the ‘distressing’ and ‘unrelenting’ noise from his flock of pet birds was found to be louder than a passing aircraft

An animal lover embroiled in a neighbour row has been fined nearly £1,000 after the ‘unrelenting’ noise from his flock of pet pigeons was found to be louder than a passing aircraft.

Grandfather Alan Pidgley was taken to court and fined following complaints from his neighbour.

The complainant said the noise of the 15 pigeons was so ‘distressing’ she and her  husband have been forced to try to move from the New Forest village where they live.

The row over the birds – which has divided the local community in Hordle, Hampshire- culminated in 70-year-old Mr Pidgley being served with a noise abatement order by the local authority for which he worked for almost 30 years.

Until two years ago, the two neighbours had spent more than a decade living next to each other amicably. 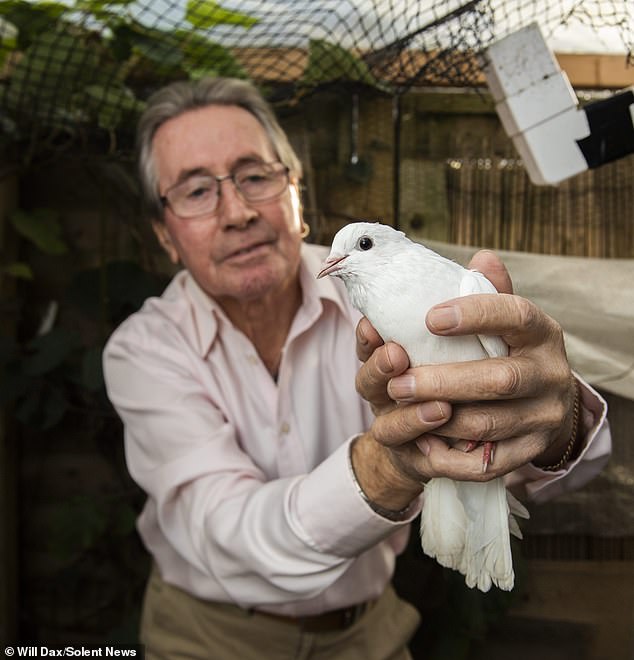 Alan Pidgley, pictured, from Hordle, Hampshire has been warned he faces further fines unless he finds a solution to the noise caused by his pigeon flock 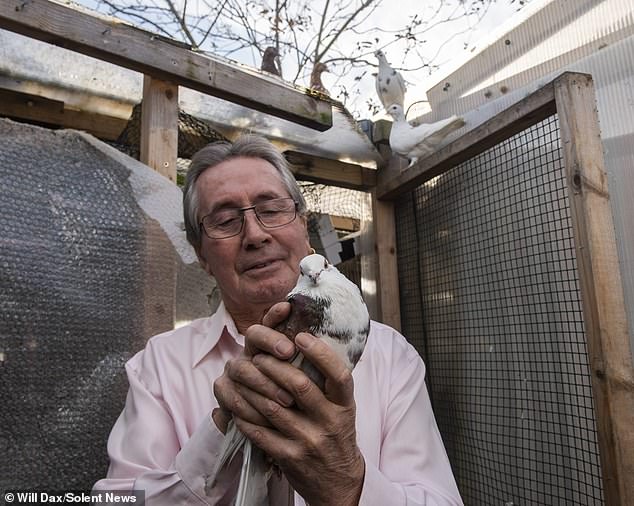 Mr Pidgley converted a shed at the back of his house for the pigeons, bringing him into dispute with a neighbour who reported the matter to the local council 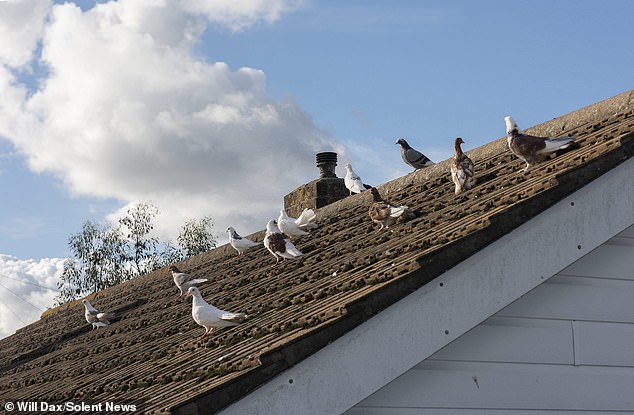 That all changed when Mr Pidgley – who also keeps rescued chickens, tortoises and rabbits as well as around 50 fish and a dog named Patch – saw an online advert offering the flock of birds.

After acquiring them, he converted a shed behind his two-bedroom detached bungalow for them to live in.

Within months, his neighbour had registered her displeasure at the disturbance.

Barrister Duncan Milne, prosecuting for New Forest District Council, told Southampton Magistrates’ Court, a complaint was first made about the ‘unrelenting’ noise from the pigeons in April last year.

The council launched an investigation to measure the level of disruption which found the birds to be louder than planes overhead or the bins being collected.

‘On the morning of January 7 environmental health officers heard about 300 incidents of bellowing and cooing,’ he said. ‘They suggested [to Mr Pidgley] reducing the number of pigeons to 10, removing eggs and relocating them to another area.

‘Mr Pidgley said he would move the pigeons and not let them out until late morning, and that feeding the pigeons was part of his wife’s Hindu religion.

‘But further recordings found 30 incidents of noise – described as unrelenting – which amounted to a statutory nuisance.

‘Mr Pidgley told [his neighbour] the pigeons had been moved, and she should acquire double glazing.

‘Officers visited again when the order was in place and heard more cooing. Sound recording equipment was installed in March.

‘They observed that the pigeons were the dominant and persistent sound, and it could be heard over ambient noise such as refuse collection and planes overhead.’ 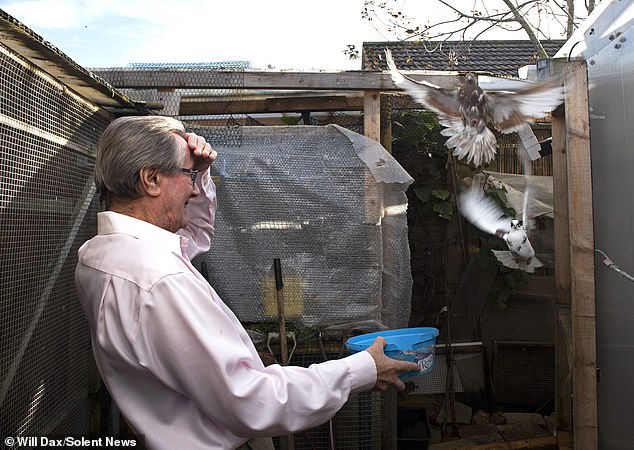 On one morning, officials recorded 300 incidents of bellowing and cooing by the pigeons 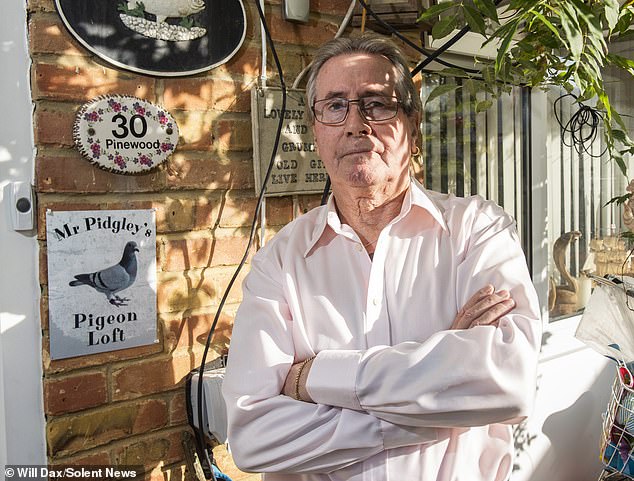 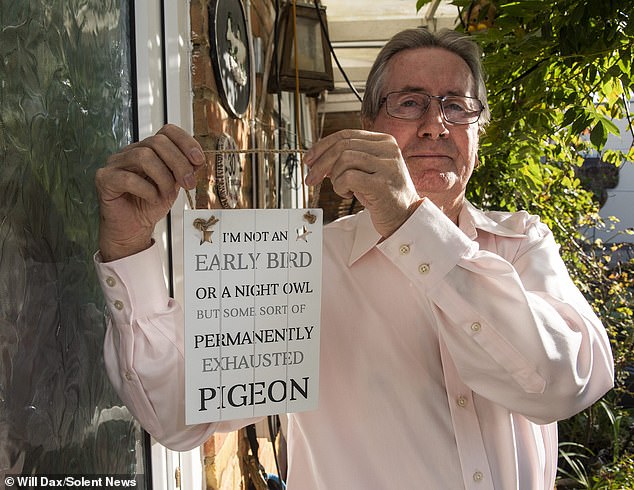 Mr Pidgley, a retired council worker, pictured, denied his pigeons created a disturbance and said many of his neighbours were not

In an impact statement, the victim said her neighbours told her and husband to ‘get used’ to the noise, saying she ‘didn’t feel able to approach her neighbour to resolve matters’.

She added she and her husband had even ‘tried to sell the property’ as a consequence of the ‘distressing noise’.

The father of three and grandfather of six told the court: ‘I moved the pigeons as far as possible from the neighbour.

‘My other neighbours have no problem whatsoever with them – and they are closer to where they are kept.

‘[The victim] even asked another neighbour to back her up, but they said they didn’t want to get involved and now she isn’t speaking to that neighbour…. they used to go out together.

‘It has caused a lot of bad feeling all round.’

Environmental Health officers deemed the birds’ cooing and flapping to be a ‘statutory nuisance’ and served him with a noise abatement order.

Magistrates ordered Mr Pidgley to pay a fine of £500 and £450 in costs – a significant reduction from the £4,389.89 the council sought – after he admitted failing to comply with it.

He now faces the prospect of saying goodbye to his beloved pigeons as the order is still in force and he risks further fines if the disturbance continues.

‘What am I going to do with the pigeons?’, Mr Pidgley asked the magistrates.

Lead Magistrate, Mr Graham Beck, told him: ‘It is not the court’s jurisdiction to advise you what you should and shouldn’t do. The order is still there, therefore if something is not done the council could serve another notice.

‘My suggestion to you would be to speak to the council.’

Mr Pidgley’s wife Tara, who is originally from Mauritius, wept at the back of the courtroom when the decision was read.

He has since received hundreds of messages of support from neighbours and friends who say they want to start a fundraising page to help pay for the fine.

Speaking after the conclusion of his case, Mr Pidgley said: ‘It’s a joke… They wanted to set up a fundraising page to help us pay the fine, but we asked them to give any donations to rescue animal charities instead.

‘Now, I’ve got to get rid of the pigeons as soon as possible or face further fines.

‘It will be absolutely heartbreaking to see them go after two years.’

On the cul-de-sac where he lives – where the average house price is £400,000 – neighbours were supportive of him.

The 72 year old said: ‘I have never had any problem with the pigeons.

‘They have never woken me up in the mornings and I love hearing them cooing on the fence – I have even put food out for them before but they don’t want to leave their home at Alan’s.’

Mrs Ball said: ‘The whole thing is ridiculous – it makes no difference to our lives.

‘I come over to see the pigeons and my grandchildren love coming to see them as well, and watching them fly away.

‘Alan and Tara are the centre of this little village community and everyone loves coming to see their animals.

‘This is the countryside, and part of the enjoyment of living here is being able to hear wild animals like Alan’s.’

When approached, the complainant did not wish to discuss the matter.