Melbourne’s bayside councils have threatened to close beaches and one mayor has told residents to stay away after large, unruly gatherings over the weekend.

The councils rallied behind Premier Daniel Andrews, who scolded people pictured at St Kilda Beach on Friday mingling in large groups without masks and mobbing a TV news reporter, saying they had let down the majority of rule-abiding Victorians. 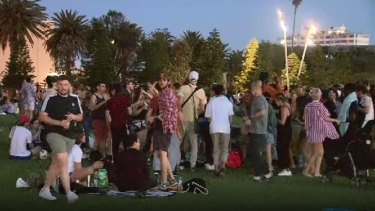 With seven new cases and three deaths announced on Saturday, the Premier repeated his message that "we are so close" and said he had spoken to Police Commissioner Shane Patton about stepping up police presence in bayside hotspots.

“Nobody has the right to break the rules and potentially put at risk everything that good, decent, law-abiding Victorians have built," Mr Andrews said. “All of the sacrifice has to be worth something.”

Police teams monitored more orderly gatherings on Melbourne's beaches on what was a warm Saturday, but Port Phillip council chief executive Peter Smith said if illegal behaviour continued, the council would have no choice but to repeat their March decision to close beaches including St Kilda.

“We are extremely disappointed by the number of people who breached the Victorian Chief Health Officer’s orders and gathered on St Kilda Beach last night," Mr Smith said. 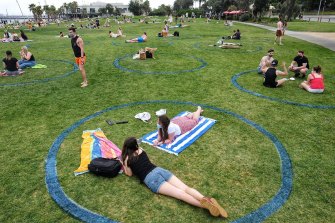 Vision from Seven News showed many people without masks packed together on St Kilda Beach on Friday night, before one grabbed and kissing a TV reporter.

Mr Martin, whose council had one active case on Saturday, said he would support a beach closure.

"We need police to do what I think they are doing, which is increase their presence and give people fines who break the rules," he said.

"Of course the restrictions allow people to go out to parks, exercise and meet a small number of other people. But please, if everyone comes down to the beaches, we won't be able to keep social distancing." 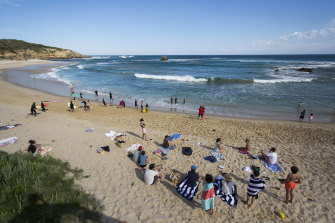 Swimmers and sunbakers were keeping their spacing at Sorrento.Credit:Paul Jeffers

Kingston Council mayor Georgina Oxley called for Melburnians to do the right thing and said closing beaches was "very much a last resort and we don't want to get there".

Chief Health Officer Brett Sutton said with Melbourne's 14-day average of 12 cases per day edging towards the threshold of five and the vast majority of cases linked to known outbreaks, the "light at the end of the tunnel is really apparent".

Sunday is forecast to reach 28 degrees and Mr Andrews said it was up to police whether beaches should be closed in future as he pleaded for Melburnians to hold the line.

"There's no alternative," the Premier said. It's not like I'm asking people to do one thing and not another. There is no alternative. We have to do this properly, and we are going to."

A cluster linked to the Butcher Club at Chadstone shopping centre expanded by six to 17 people while regional Victoria recorded another day of zero cases, with just two active infections outside Melbourne.

Professor Sutton said, however, that even if the regions meets the threshold of no cases in 14 days this week, Melbourne's ongoing cases will hold them back from taking the next step in the roadmap where all retail would reopen and hospitality capacity would increase.

"I think we have to make sure that regional Victoria is moving in a certain synchrony with metro Melbourne," he said, flagging the possibility of the regions taking another step when Melbourne is slated to on October 19.