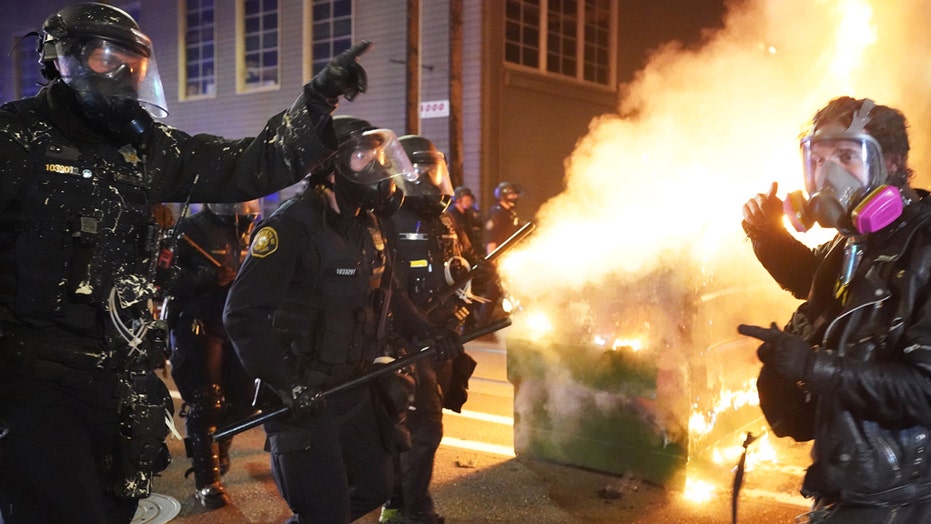 Portland police have responded to at least 72 nights of protests, including 17 riots, and have made roughly 500 related arrests over the course of the more than 85 days since George Floyd's death on May 25, according to a timeline of events recently released.

The Portland Police Bureau released “Protests in Portland,” a timeline showing where and when demonstrations were held from May 29 through Thursday. The timeline also shows how many arrests were made on each night and what kinds of crimes, if any, were committed.

PORTLAND POLICE OFFICER TALKS ABOUT EXPERIENCE AT PROTESTS: ‘THIS IS NOT WHAT WE'RE USED TO’

While the data shows there were 491 protest-related arrests made over the course of the several months, certain dates along the timeline don’t specify whether any arrests were made — being marked with an “N/A” rather than a 0. Meanwhile, police said in a related press release that they had made “at least 500” arrests. 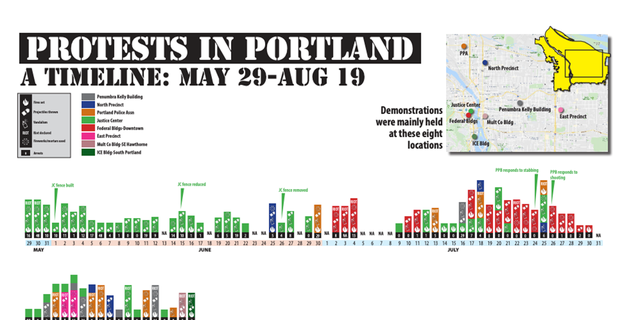 Portland has endured months of ups-and-downs related to protest activity, with the timeline showing there were sometimes days in a row when police did not report any demonstrations, such as from July 5-8.

But Oregon’s largest city has also seen its fair share of violent or destructive behavior.

Protesters threw projectiles during 58 of the 72 nights of demonstrations identified on the timeline, the police data shows. They allegedly started fires on 42 of the nights.

The timeline indicates riots were declared on 17 of the nights, though it doesn’t specify how often police classified protests as unlawful assemblies. 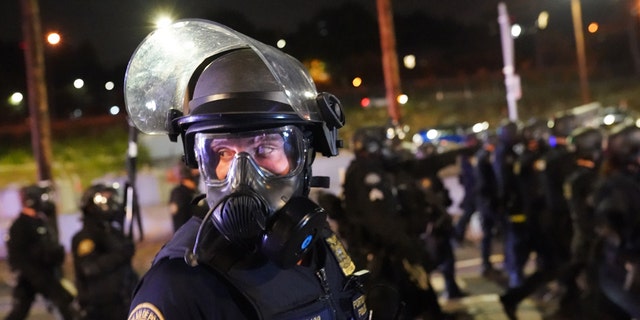 A Portland police officer scans the crowd while dispersing protesters from in front of the Immigration and Customs Enforcement (ICE) detention facility early in the morning on Aug. 21, 2020 in Portland, Oregon. (Nathan Howard/Getty Images)

Police further outlined their guidelines for determining whether a demonstration is a riot versus an unlawful assembly.

“A Civil Disturbance is an unlawful assembly that constitutes a clear and present danger of riot, disorder, interference with traffic upon the public streets or when another immediate threat to public safety, peace or order appears,” police said. “A Riot is when six or more persons engage in tumultuous and violent conduct and thereby intentionally or recklessly creating a grave risk of causing public alarm, excluding persons who are engaged in passive resistance.”

The Trump administration came under fire at the end of July after deploying federal law enforcement agents from U.S Customs and Border Protection, U.S. Immigration and Customs Enforcement and the U.S. Marshals Service to Portland’s downtown area, an order made following consecutive nights of unrest that increasingly targeted a federal courthouse. 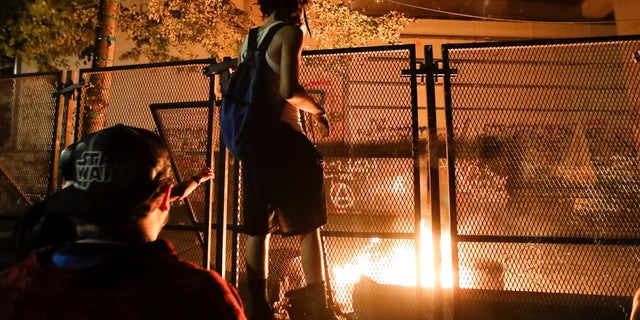 The presence of the agents was aimed at quelling the demonstrations but caused tensions to flare further. Elected and public officials were outspoken in saying they did not want them there, and calling for the federal law enforcement presence to be removed.

The U.S. agents began drawing down July 31 under an agreement between the U.S. Department of Homeland Security and Democratic Gov. Kate Brown calling for Oregon state troopers to guard the courthouse.

As the timeline shows, there have been nearly as many riots declared in Portland so far since the beginning of August than in every other month included in the timeline. 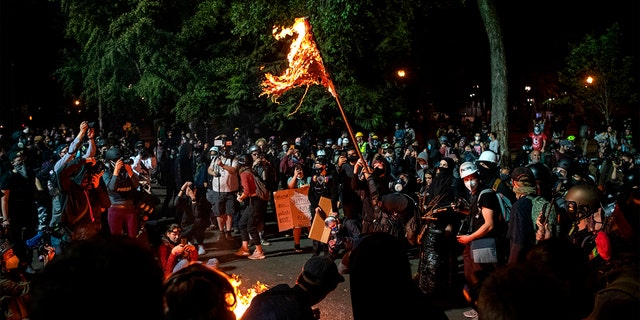 A demonstrator burns an American flag outside the Mark O. Hatfield United States Courthouse late Friday night during the protest on July 31, 2020 in Portland, Oregon. (ALISHA JUCEVIC/AFP via Getty Images)

Police declared eight riots between Aug. 1 to Aug. 19 compared to the nine reported from May 29 to July 31. Since the timeline was published, a ninth riot was declared, this one on Wednesday night, police said.

The timeline does not specify how many police officers have been injured responding to protests and demonstrations, but previous reports released by PPB show members of law enforcement have been injured from projectiles that were thrown, fireworks that were hurled toward them and lasers that were shone in their eyes.

And the demonstrations show virtually no signs of slowing down.

Most recently, on Friday morning, police announced they had arrested wanted suspect Marquise Love, 25, in connection with the caught-on-video attack of a man in downtown Portland. Love appeared to have been caught on video repeatedly punching and kicking the man, who was then knocked unconscious. 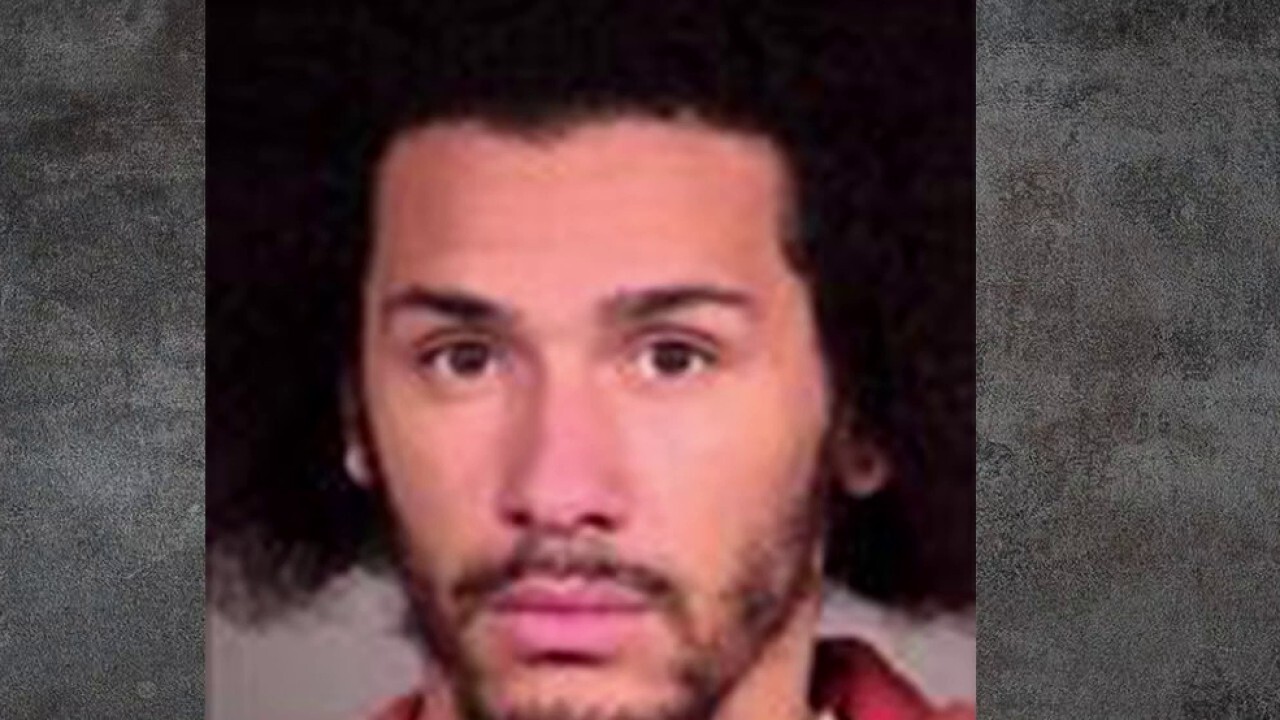 On Thursday night into Friday, people in a group of about 100 allegedly sprayed a U.S. Immigration and Customs Enforcement building in Portland.  They also hurled rocks and bottles at agents and shined laser lights at them, Portland police said in a statement.

The agents set off smoke or tear gas and used crowd-control munitions to try to disperse the crowd, The Oregonian/OregonLive reported. Three people were arrested, police said in their statement.

The violence came a day after protesters clashed with federal agents for the first time since July in a demonstration that also targeted the ICE building.

23/08/2020 World News Comments Off on Portland protest data shows police have declared at least 17 riots, made more than 490 arrests since May
Lifestyle