London: The Duke and Duchess of Sussex believe the Queen failed to take “full ownership” of the race allegations made in their interview with Oprah Winfrey, according to the authors of the unauthorised biography Finding Freedom.

A friend of the couple told Omid Scobie and Carolyn Durand that the Queen’s lack of action had prevented the Prince Harry and Meghan from moving on from the claims.

The source also suggested that the Queen’s assertion that “recollections may vary” had not gone down well. 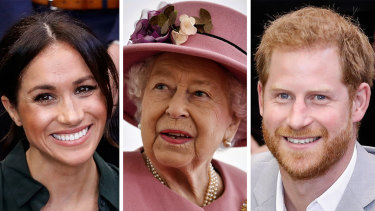 Meghan and Harry’s Oprah interview presents a major challenge for the Queen. Credit:AP

The Queen, 95, has until now been one of the only senior members of the Royal family to escape the Sussexes’ criticism.

The couple have gone out of their way to single her out for praise. But a new epilogue to Finding Freedom, published in People magazine in the US, suggests that the Harry and Meghan feel frustrated that the Duke’s grandmother did not follow through with her promise to address their concerns. It says: “The Queen’s ‘recollections may vary’ comment ‘did not go unnoticed’ by the couple, who a close source said were ‘not surprised’ that full ownership was not taken.

“‘Months later and little accountability has been taken’, a pal of Meghan added. ‘How can you move forward with that?‘”

The Sussexes made a series of allegations about the Royal family during their two-hour televised interview with Winfrey in March.

The most damaging came as the Meghan, 40, alleged that when she was pregnant with their son, Archie, “concerns” had been raised by a member of the family about the colour of his skin.

She also suggested that when she had felt suicidal, the institution had failed to help her.

However, Harry insisted: “I would never blindside my grandmother, I have too much respect for her.”

The Queen reacted to the interview by insisting that the couple’s allegations would be “taken very seriously”.

“The issues raised, particularly that of race, are concerning,” she said.

“Whilst some recollections may vary, they are taken very seriously and will be addressed by the family privately.”

Finding Freedom, published last northern summer, will be republished in paperback on August 31 with an epilogue summarising the events of the last two years.

In an interview to promote the new edition, Scobie claimed that one of the lessons the Sussexes had learnt was to prioritise their mental health and keep “some of the toxicity” at an arm’s – and ocean’s – length.

He also told People magazine that as their period of shared parental leave drew to a close two months after the birth of daughter Lilibet, the couple were entering a new “era of visibility”.

He said: “They’re a couple who do very well in those moments of human interaction. They need to be on the ground. They say that the proof is in the pudding, and what we are about to see is that pudding.”

His comments raise the prospect that the Sussexes will take part in royal-style walkabouts on US soil.

The epilogue is expected to cover the Sussexes’ interview with Winfrey, the bullying allegations made against the Duchess by royal staff, which she denies, and the Prince Philip’s death.

It is also likely to touch upon the couple’s multimillion-pound deals with Netflix and Spotify and the Queen’s decision to strip them of all royal patronages earlier this year.

Meghan has insisted that they did not collaborate with the authors.

A witness statement lodged with the court on her behalf suggested the book was full of mistakes.