Prince Harry will guest edit the Instagram account for National Geographic today to raise awareness of the role trees play in the earth’s eco-system.

The Duke of Sussex will manage the magazine’s social media platform to launch a campaign called ‘Looking Up’, and will invite users to share their own pictures of trees from around the world.

The prince will work with National Geographic photographers to highlight indigenous trees and how crucial they are to life on earth.

He will also share an image taken in Liwonde National Park, Malawi, where he is unveiling two initiatives to help preserve trees in the area. 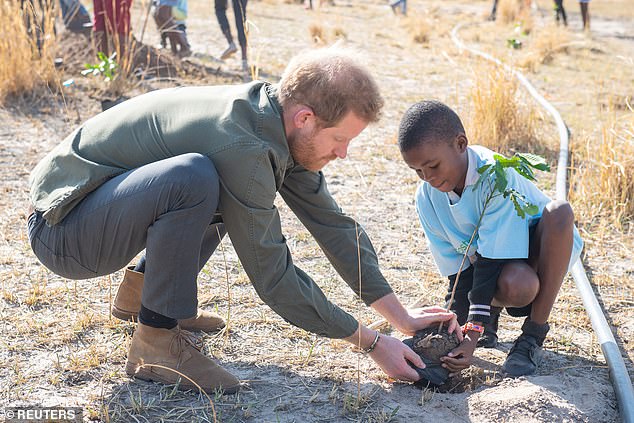 Prince Harry helps a local schoolboy to plant a tree at the Chobe National Park, on day four of the royal tour of Africa last thursday 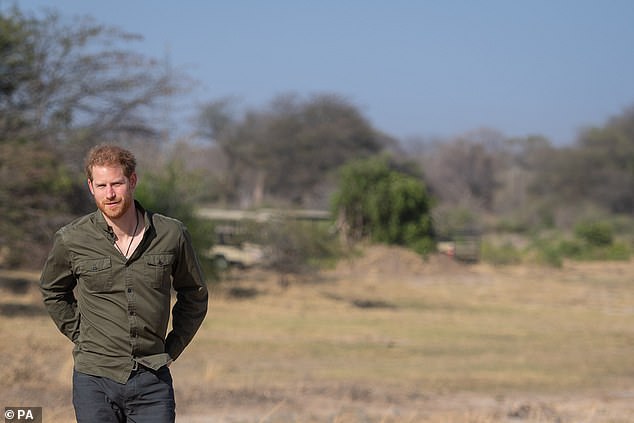 The Duke of Sussex will manage the magazine’s social media platform to launch a campaign called ‘Looking Up’ Pictured: Harry during a tree planting at the Chobe Tree Reserve, Botswana, last Thursday

Harry is currently on the eighth day of his official tour in Africa.

Buckingham Palace said that Harry’s passion for trees and forests is ‘inspired by the work he does on behalf of his grandmother, Her Majesty Queen Elizabeth II.’

The ‘Queens Commonwealth Canopy’ was launched in 2015, when Commonwealth countries were invited to submit forests and national parks or plant trees to preserve in The Queen’s name.

Almost 50 countries are taking part and have already dedicated indigenous forest for conservation, or have committed to planting millions of new trees to help combat climate change.

The Duke of Sussex makes a speech at a reception at the British High Commissioner’s Residence in Lilongwe, Malawi 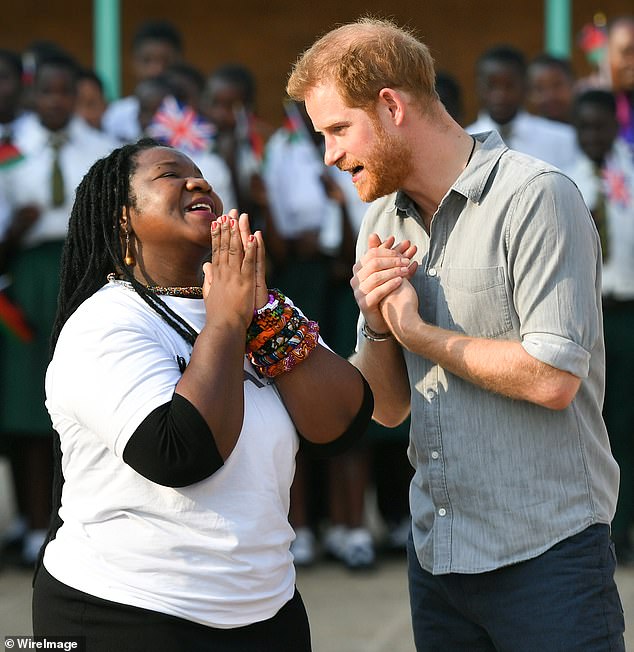 The Duke has launched 15 of the QCC projects across the world including in the Caribbean, UK, New Zealand, Australia and Tonga.

During Their Royal Highness’s tour of Africa, there will be two more national parks committed to the project, as well as a tree planting initiative with schoolchildren in Botswana.

It comes as Harry rubbished suggestions that climate campaigning is ‘hippy’ in a plea for people to ramp up efforts to safeguard the planet.

He said to make progress humans needed to overcome ‘greed, apathy and selfishness’ and that it was essential to learn from past mistakes to protect the world’s most valuable assets.

He also warned of ‘vast ecosystems’ set ablaze in Africa, communities destroyed for short-term gain, and said that a ‘natural order’ between humans and wildlife must be restored.

Writing in the Daily Telegraph from Malawi, Harry added: ‘This may well sound hippy to some. But we cannot afford to have a “them or us” mentality.

‘Humans and animals and their habitats fundamentally need to co-exist or within the next 10 years our problems across the globe will become even more unmanageable.

‘Nature teaches us the importance of a circular system, one where nothing goes to waste and everything has a role to play.

‘If we interfere with it, rather than work with it, the system will break down.

‘Conservation used to be a specialist area, driven by science.

‘But now it is fundamental to our survival and we must overcome greed, apathy and selfishness if we are to make real progress.’

The column came ahead of his visit to Malawi’s Liwonde National Park on the eighth day of a tour of southern Africa to highlight conservation and anti-poaching work.

Harry said his role had given him an opportunity to ‘meet, listen and learn from those who live in some of the world’s harshest conditions and understand what it is they so desperately need to thrive’.

The Duke also highlighted environmental catastrophes including overfishing, and elephant and rhino poaching.