Look who’s back! Professor Lockdown Neil Ferguson who broke the rules to see his lover has key role in Boris Johnson’s dramatic U-turn on Christmas

The top scientific adviser who quit after breaking lockdown to see his married lover played a major role in the dramatic U-turn on Christmas.

Professor Neil Ferguson was among those attending a meeting of Nervtag – the New and Emerging Respiratory Virus Threats Advisory Group – to discuss the new mutant strain of coronavirus on Friday.

The key findings showing the variant was 70 per cent more transmissible were then presented by Chief Medical Officer Chris Whitty to Boris Johnson.

They were said to have played a pivotal role in changing the Prime Minister’s mind – and led to Saturday’s announcement that Christmas was effectively cancelled for millions. 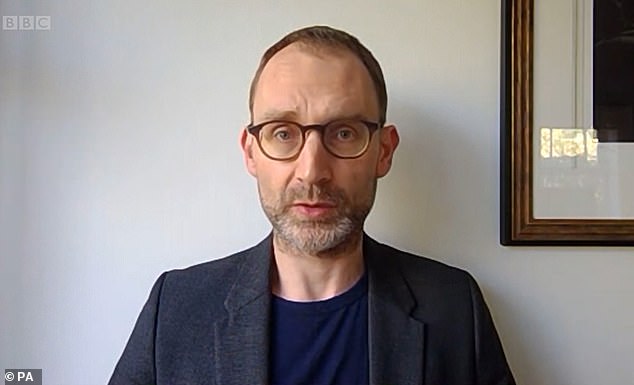 However, minutes from the Nervtag meeting published yesterday have now revealed the expert committee had in fact only ‘moderate confidence’ that the new strain was more transmissible than other variants.

It comes after claims that the majority of its members were opposed to immediate action over the new mutation and wanted to wait for more evidence.

Professor Ferguson is largely credited with causing the Government’s U-turn on its initial ‘herd immunity’ strategy, after which the first lockdown was introduced in March, earning him the nickname Professor Lockdown.

The scientist from Imperial College London had predicted that if no action was taken to slow the virus, the UK’s final death toll could surpass 510,000.

He quit SAGE after being caught breaking his own advice when he allowed his younger lover Antonia Staats, who was 38 at the time, to visit his home on at least two occasions

So far about two million Britons have been infected with Covid-19 and 67,000 have died.

At the start of the pandemic, the 52-year-old regularly appeared on TV urging the public to stick to strict social distancing rules.

But he was caught breaking his own advice after it was revealed he allowed his younger lover Antonia Staats, who was 38 at the time, to visit his home on at least two occasions.

Such meetings were forbidden at the time. The activist, who works for a US-based pressure group campaigning on poverty, climate change and corruption, had travelled across the capital from her £1.9million home, where she lived with her husband and children.

Professor Ferguson, who has one child with his ex-wife, had only just finished two weeks of isolation after testing positive for coronavirus.

He quit the Government’s Scientific Advisory Group for Emergencies (Sage) in May after the affair was revealed, admitting to an ‘error of judgment’.

Yesterday, Professor Ferguson told the Mail he had remained on Nervtag but was too busy to comment further.

They cited the Nervtag findings that it was 70 per cent more transmissible and was responsible for the majority of new infections in the hotspots of London and the South East.

Though they said the strain was not deadlier and would not render the vaccine ineffective, they warned it could increase the critical ‘R rate’ of transmission by between 0.4 and 0.9.

Without immediate action, this would cause an exponential increase in infections and could soon overwhelm intensive care capacity.

However, minutes from the two-hour Nervtag meeting beforehand show the committee had concluded there was ‘currently insufficient data’ to answer crucial questions on the new strain. This included why it appeared to be more transmissible.

It also noted that they did not have enough information to determine how severe it was compared with other strains and whether it could reinfect those who had already had Covid.

A senior Whitehall source told the Mail on Sunday that the majority of members believed they needed more evidence before acting.

They said: ‘Evidence is emerging day by day from Public Health England, but ministers have been bullied into action by a vocal minority which believes that, in the style of Corporal Jones from Dad’s Army, we should be panicking much more frequently.’

On the same day as the Nervtag meeting, Professor Ferguson appeared on the BBC suggesting the country might need a third lockdown that would be even tougher than the second.

In September, he told the BBC’s The Life Scientific his intention had never been to encourage the March lockdown and it took a while for him to be convinced it was the right thing to do.