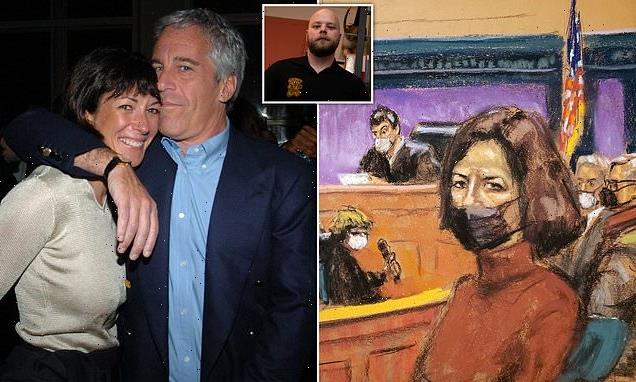 The US is willing to drop two charges of perjury against disgraced socialite Ghislaine Maxwell if a conviction for sex trafficking is allowed to stand, court documents showed Monday.

The 60-year-old Briton could spend the rest of her life behind bars after a jury convicted her of recruiting and grooming young girls to be sexually abused by the late American financier and pedophile Jeffrey Epstein last month.

She is due to be sentenced at a later date but there is ongoing disagreement over when a timetable should be set.

Prosecutors want Maxwell sentenced within three to four months, but her defense team has opposed setting a date, arguing there is a ‘compelling basis’ to overturn her conviction.

Her lawyers last week demanded a new trial after a juror revealed he had helped convict Maxwell by telling fellow jury members about his experience of sexual abuse.

According to court documents dated January 10, the US government has now offered to drop two perjury charges linked to claims Maxwell made in a 2016 deposition in a separate civil lawsuit should the sex crimes conviction stand. Each perjury charge carries a maximum five-year prison term.

The charges allege the convicted sex trafficker lied under oath by hiding her participation in Epstein’s offences during a separate civil case brought against her by the Prince Andrew’s accuser, Virginia Giuffre.

Confirming their position in the letter to Judge Alison J. Nathan, the US government said: ‘In the event the defendant’s post-trial motions are denied, the Government is prepared to dismiss the severed perjury counts at the time of sentencing, in light of the victims’ significant interests in bringing closure to this matter and avoiding the trauma of testifying again. 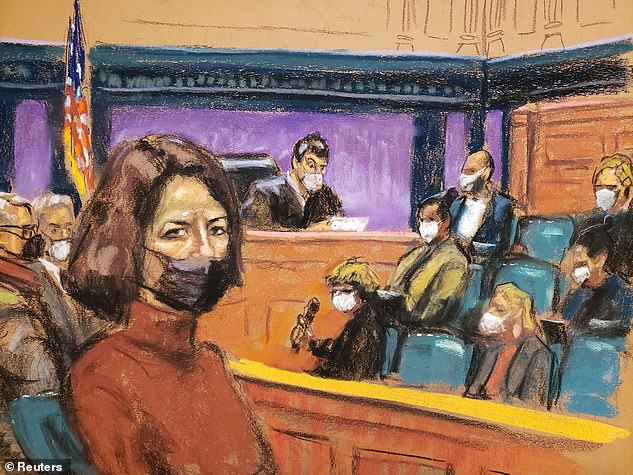 Ghislaine Maxwell, 60, could spend the rest of her life behind bars after a jury convicted her of recruiting and grooming young girls to be sexually abused by the late American financier Jeffrey Epstein last month (Pictured: Courtroom sketch shows the moment Maxwell sat in the New York courtroom as her guilty verdicts were read out) 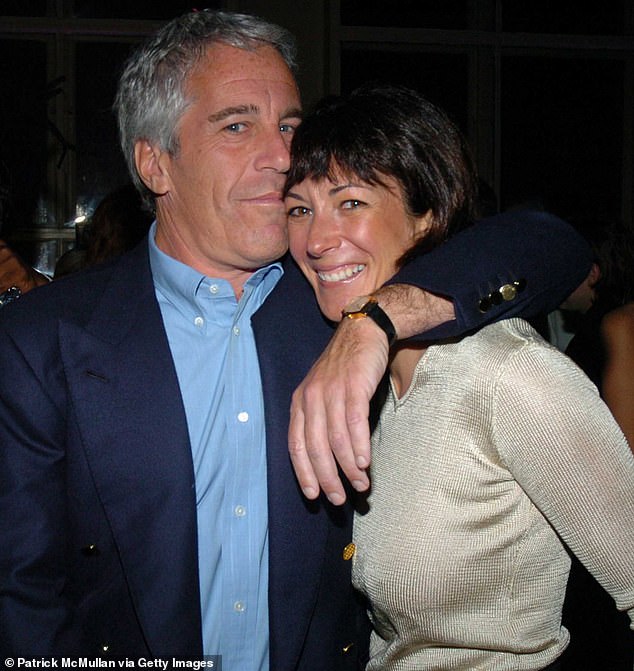 According to the court documents, prosecutors want Maxwell sentenced within three to four months, but her defense team has opposed setting a date, arguing there is a ‘compelling basis’ to overturn her conviction (Pictured: Billionaire Epstein is pictured with Maxwell in 2005) 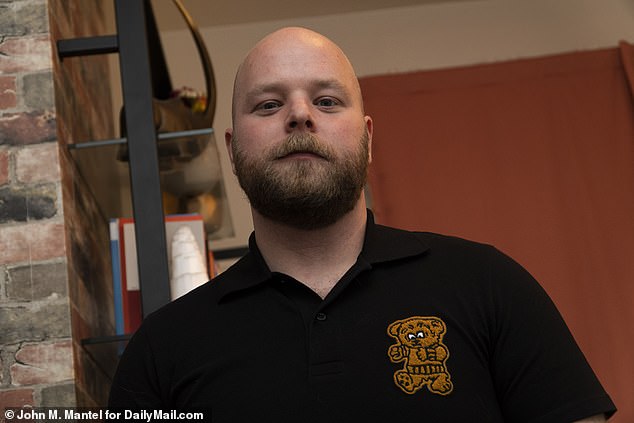 ‘If any of the defendant’s post-trial motions are granted, the government proposes that the parties be directed to promptly confer and propose a schedule for further proceedings.

‘That schedule may depend on the manner in which the court resolves such motions.’

The prosecution also requested the preparation of a pre-sentence investigation report, but the defence argued anything Maxwell said in the report ‘could be used against her at her retrial’.

Setting out their position in the letter, Maxwell’s lawyers said: ‘The defence requests that the court delay setting a schedule for sentencing because there is a compelling basis for the court to overturn Ms Maxwell’s conviction and grant her a new trial based on the disclosures of Juror 50 during deliberations.

‘The defence therefore objects to setting a schedule for sentencing until this motion is resolved.

‘Furthermore, requiring Ms Maxwell to participate in the preparation of the pre-sentence investigation report, while she is awaiting a decision on her motion for a new trial, will adversely impact her Fifth Amendment rights (the right to silence so as not to incriminate oneself).

‘Ms Maxwell will be forced into the position of not cooperating with the probation department’s investigation because any statement she makes to Probation, and any documents she provides, may be used against her at her retrial.’

Maxwell’s conviction was first put in jeopardy when Juror No 50 Scotty David admitted he ‘flew through’ a pre-trial questionnaire and did not recall being asked on the form about his experience of sexual abuse.

David claimed he used his experience to influence other jurors, saying: ‘When I shared that, they were able to come around on the memory aspect of the sexual abuse.’

The 35-year-old, who has hired a lawyer, could face jail if it is found he intentionally lied on the questionnaire.

Maxwell’s defense has insisted she not be made to ‘expend resources’ on other legal matters until a ruling on whether to conduct a retrial is made.

It comes after a second, unidentified, juror told The New York Times that they, too, had been abused as a child.

‘They said they had discussed the experience during deliberations and that the revelation had appeared to help shape the jury’s discussions,’ the paper reported.

Meanwhile Maxwell’s lawyers told the Mail on Sunday that they believe they have found a third juror in her sex trafficking trial who lied about being abused. 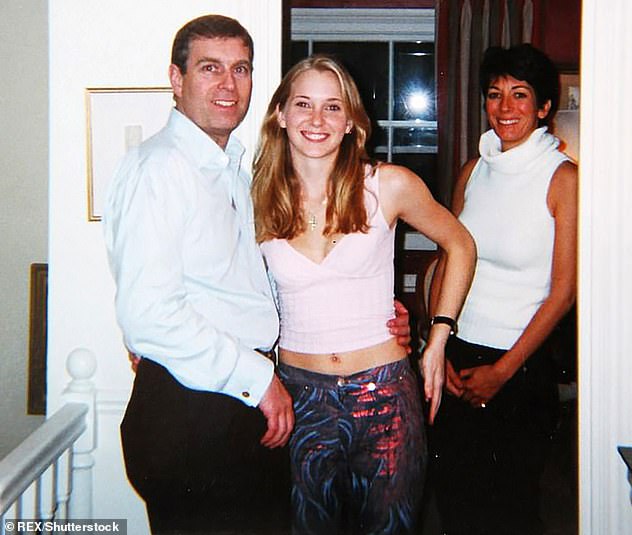 A New York judge last week said they would decide ‘pretty soon’ whether to dismiss a sexual assault lawsuit against the UK’s Prince Andrew by Virginia Giuffre – also a longtime accuser of Maxwell and Epstein’s (Pictured: Infamous photo purportedly showing Prince Andrew and Virginia Roberts, aged 17, at Ghislaine Maxwell’s townhouse in London in 2001)

A source said Maxwell’s legal team feel ‘confident a third juror lied on their jury application’, adding: ‘There are also questions over a fourth juror, so this thing is up in the air.’

Maxwell’s trial and subsequent conviction for assisting Epstein – who hanged himself in his New York jail cell in 2019 – exposed a murky world of sex trafficking among the rich and powerful.

A New York judge last week said they would decide ‘pretty soon’ whether to dismiss a sexual assault lawsuit against the UK’s Prince Andrew by Virginia Giuffre – also a longtime accuser of Maxwell and Epstein’s.

Giuffre alleges that Epstein lent her out for sex with his wealthy and powerful associates, including Andrew, an allegation that Queen Elizabeth II’s second son has repeatedly and strenuously denied.