News of Queen Elizabeth II’s death reverberated across the pond on Thursday, with the US lowering flags to half staff, the Empire State Building and other iconic structures lighting up in the royal color purple and many Americans reflecting on Her Majesty’s life and legacy.

‘It’s the end of an era,’ remarked Jose Reyes, 37, in New York’s bustling Time Square where a large digital billboard projected an image of a beaming queen, clad in one of her famous hats.

A few blocks away, the Empire State Building was illuminated after sunset in purple and silver to ‘honor the life and legacy of Her Majesty,’ the historic skyscraper’s official Twitter account said.

The Queen had stood at the top of the building over a half-century ago, when it was the tallest building in the world — a reflection of her reign’s historic 70-year length and the technological advances she’s born witness to.

Her Majesty died ‘peacefully’ at Balmoral Castle in Scotland on Thursday. She was 96 years old.

Tributes have poured in from all over the world with words of comfort, flags being lowered to half staff and iconic landmarks lighting up in royal colors. 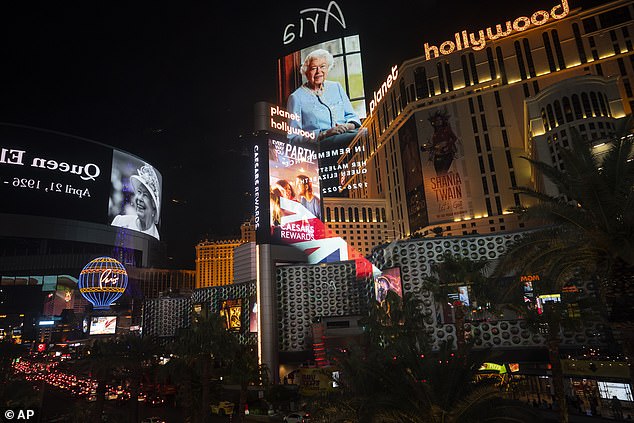 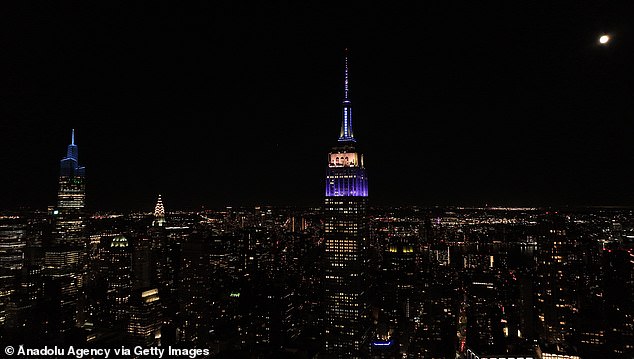 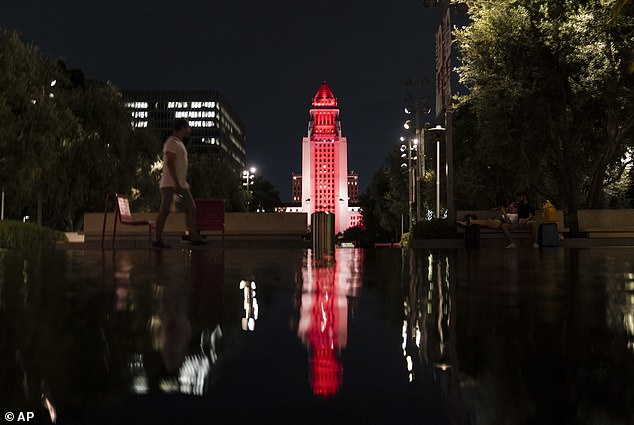 In recognition of the ‘special relationship’ between the United States and Britain, flags at federal buildings all across the country were ordered by President Joe Biden to be lowered to half-staff, where they will remain until the evening of the Queen’s burial.

Many iconic landmarks and buildings across the United States were lit up in either royal purple or white, red and blue, the three colors of the British flag in honor of the Queen.

On the West Coast, Los Angeles City Hall in California was shining bright red and blue as the day turned into night and mourners came to grips with the loss.

In Las Vegas, the High Roller Observation Wheel and the Eiffel Tower at Paris Las Vegas are illuminated royal purple for the Queen while the Fremont Street Experience in Vegas is airing a video to celebrate her life.

According to the History Channel, the color purple is generally associated with the ‘upper crust’ of society, including kings and queens, because, ‘to harvest it, dye-makers had to crack open [a rare] snail’s shell, extract a purple-producing mucus and expose it to sunlight for a precise amount of time.’

The statement reads, ‘The City of Atlanta joins the world in mourning the loss of the Queen. Our thoughts and prayers are with the Royal Family, the people of the United Kingdom and the Commonwealth realms.’

It continues, ‘The Queen served her country for 70 years and her loss will be greatly felt around the globe. I send my condolences to the British Consulate General Atlanta, the UK residents who now make their home in Atlanta and the residents of our sister city, Newcastle upon Tyne.’ 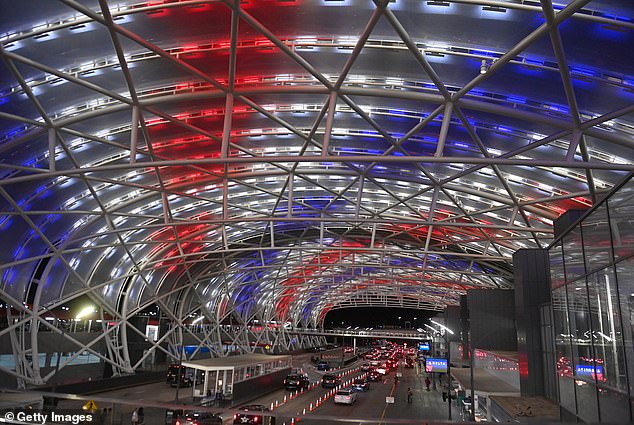 The Hartsfield-Jackson Atlanta International Airport is illuminated in white, red and blue, the three colors of the British flag in honor of the passing of Queen Elizabeth II on Thursday 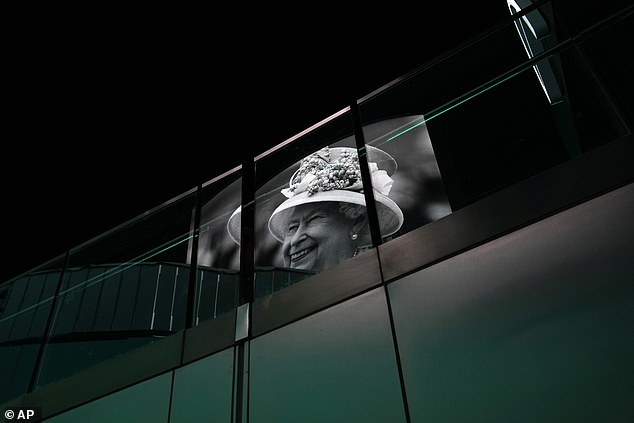 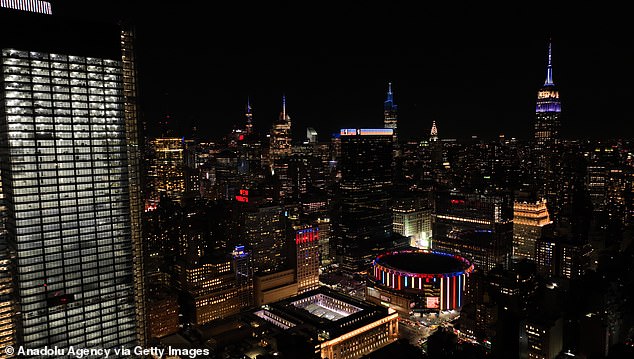 Cities across America contributed in other ways to honor the Queen.

In downtown New York City, close to where George Washington was inaugurated as the first US president following America’s independence from Britain nearly 250 years ago, the New York Stock Exchange observed a minute of silence.

The NFL observed a moment of silence before the start of the regular-season opening game between the Los Angeles Rams and the Buffalo Bills.

There was also a moment of silence held prior to the start of tonight’s U.S. Open match in Queens and the New York Yankees game in the Bronx. 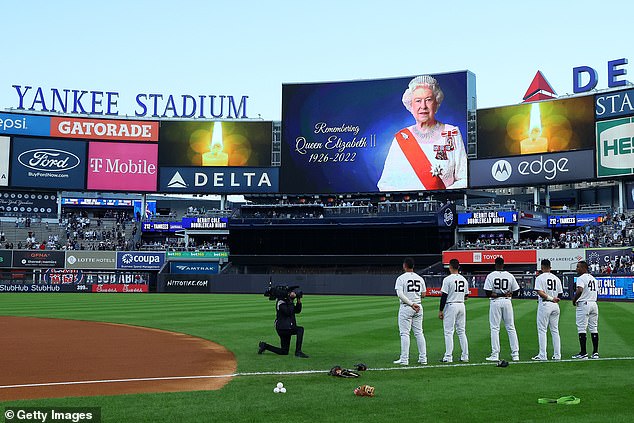 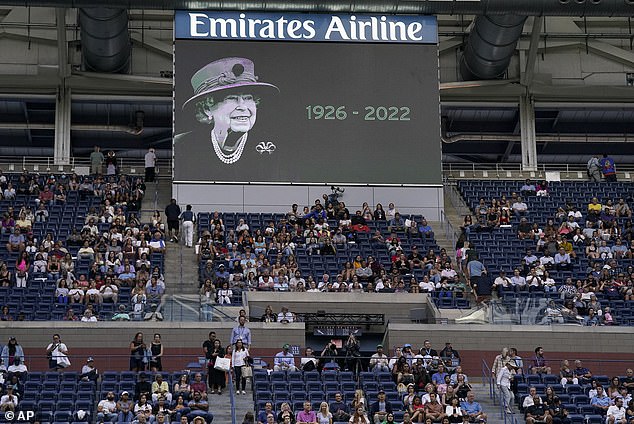 The Queen’s image on the big screen at Arthur Ashe Stadium during a moment of silence before the start of the women’s singles semifinals of the U.S. Open tennis championships 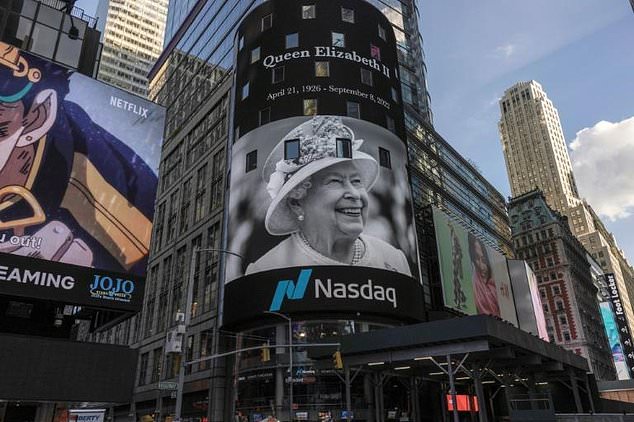 An image of Queen Elizabeth II is displayed at Times Square on September 9, 2022 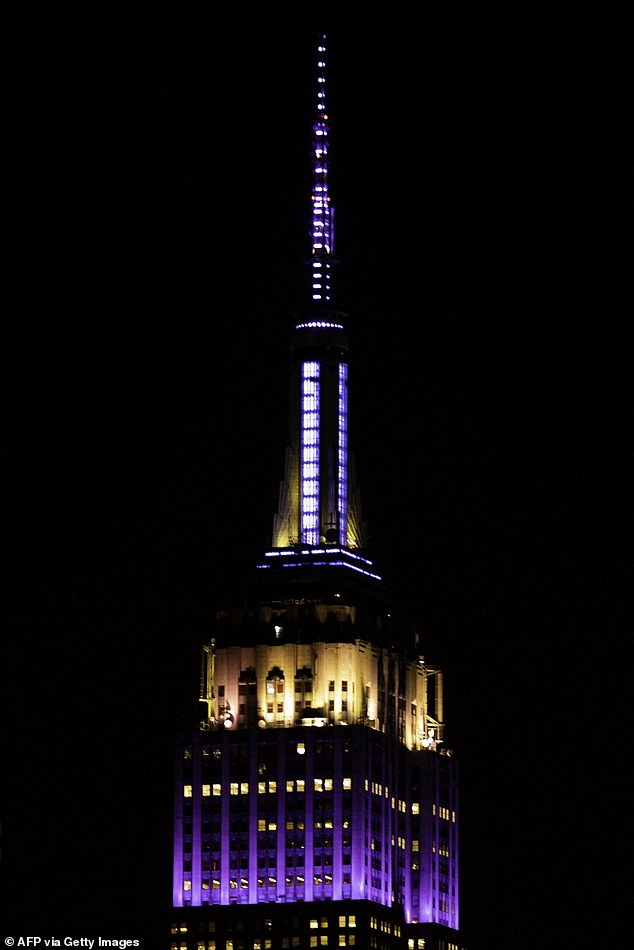 The Empire State Building lights up in purple and sparkles in silver n honor of the life and legacy of Her Majesty, Queen Elizabeth II, who died on Thursday at the age of 96

In the US capital, at 5 pm local time (2100 GMT), bells at the Washington National Cathedral chimed 96 times, one for every year of the queen’s life.

Speaking to AFP in the Washington suburb of Bethesda, 26-year-old Drew said she saw the queen ‘in a positive view’ due to her public appearances largely being ‘involved with charity,’ despite other ‘negative aspects to the monarchy.’

‘I definitely saw her as kind of a maternal figure’ for her country,’ Drew added.

‘For many people, she’s the only Queen they’ve ever known their entire lives.’

Others were only slightly aware of the queen’s story, or had just heard about her recent family woes, especially regarding Prince Harry and his wife Meghan, who have made California their new home.

Some people on the West Coast remembered the monarch’s trademark noble image, maintained with utmost precision.

‘She was an admirable woman, with a real sense of humor. She was always perfect, despite her mobility problems or the arguments within the royal family’ said 45-year-old freelance TV producer Corrine Smith, outside an English pub in Santa Monica, where dozens of Brits gathered Thursday evening.

‘We’re all gonna miss her,’ Smith said, noting that she watches the Netflix series ‘The Crown,’ which has played a major role in the revival of interest around the royal family in recent years.

‘A star is dead,’ said Gregg Donovan, dressed as a royal valet and carrying flowers to lay beneath the queen’s portrait at the pub.

The 62-year-old actor and tour guide said he thinks Queen Elizabeth II ‘should get a star on the Hollywood Walk of Fame.’

‘She was the most famous person in the world, after all.’ 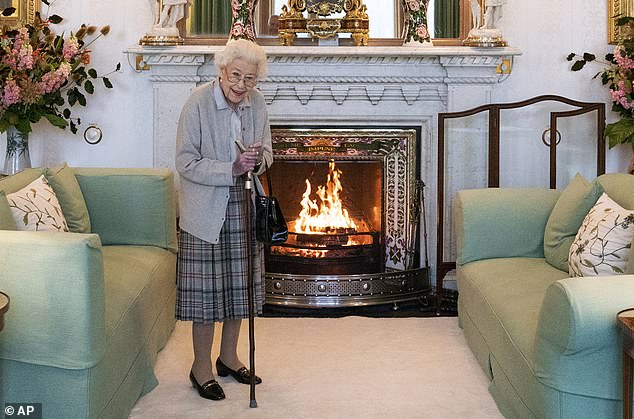 The Queen poses for a photograph in the drawing room at Balmoral on Tuesday shortly before her meeting with Liz Truss, whom she appointed as her Prime Minister 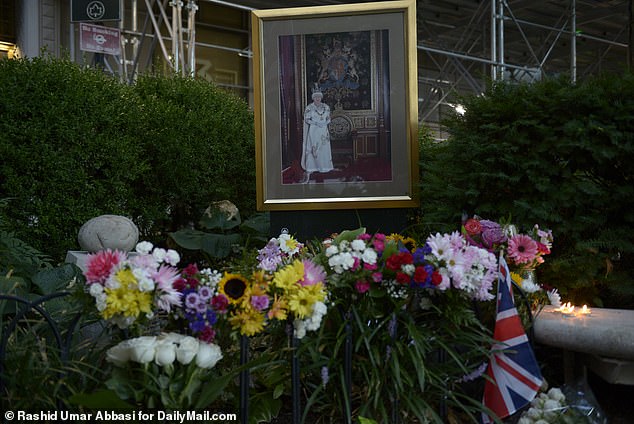 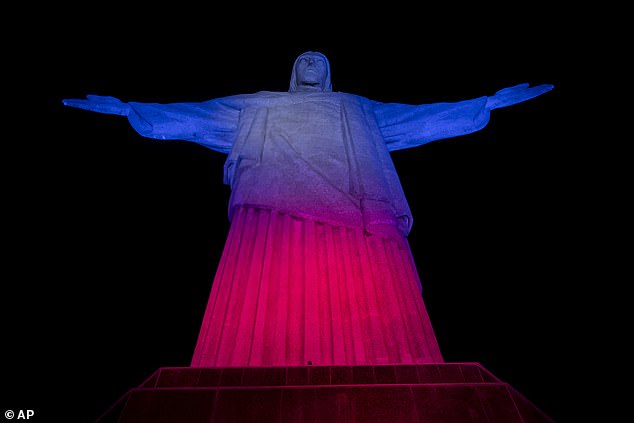 The Christ the Redeemer statue is illuminated in red, blue and white, the colors of the flag of The United Kingdom, as a tribute to Queen Elizabeth II on her passing, in Rio de Janeiro, Brazil 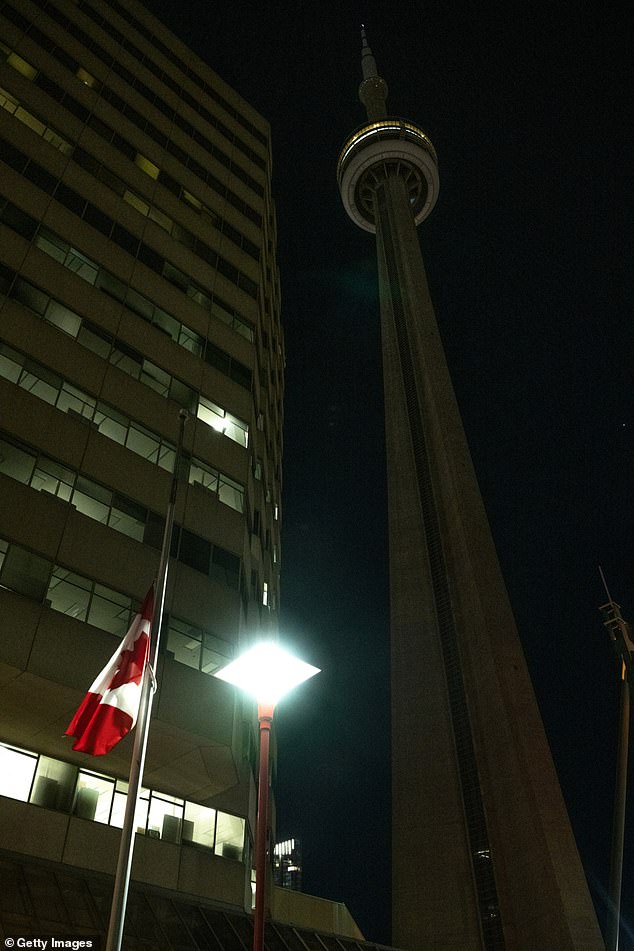 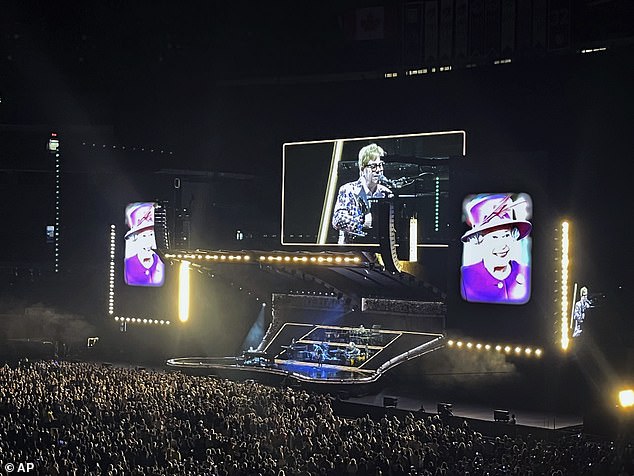 Elton John performed on Thursday in Toronto where he paid tribute to Queen Elizabeth II at his final concert in the city, saying she inspired him and is sad she is gone

The Queen’s death was announced at 6.32pm in a short black-edged statement from Buckingham Palace which read simply: ‘The Queen died peacefully at Balmoral this afternoon. The King and The Queen Consort will remain at Balmoral this evening and will return to London tomorrow.’

Operation London Bridge will swing into action on Friday, the period of ten days between the Queen’s death and her state funeral, which is expected to take place on Monday September 19, as the country is plunged into a period of official mourning.

The Queen’s coffin is expected to remain at Balmoral for at least the next two days before being flown back down to London next week.

The Union flag on Buckingham Palace was poignantly lowered to half-mast yesterday, while a framed plaque of the statement announcing the Queen’s death was placed on the front gates by royal household staff.

The Royal Standard is never flown at half-mast, even after the Queen’s death, as there is always a monarch on the throne. Flags will fly at half-mast on UK Government buildings in tribute to the Queen from now until the morning after her funeral.

The Queen’s death will see Britain and her Commonwealth realms enter into a ten-day period of mourning as millions of her subjects in the UK and abroad come to terms with her passing. 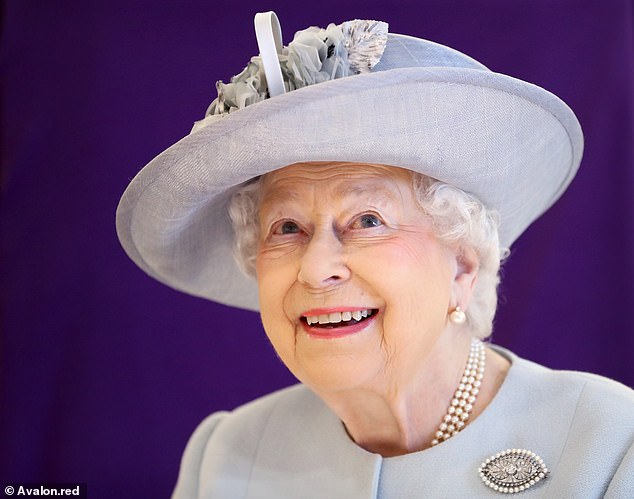 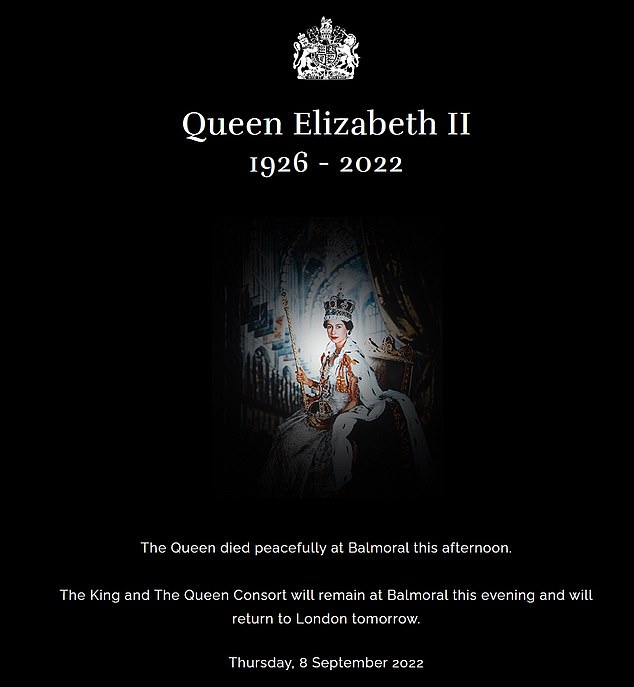 Her Majesty the Queen – Britain’s longest-reigning monarch – has died peacefully at Balmoral aged 96. Her son Charles, is now king. He will remain at Balmoral tonight before returning to London with the Queen Consort, Camilla 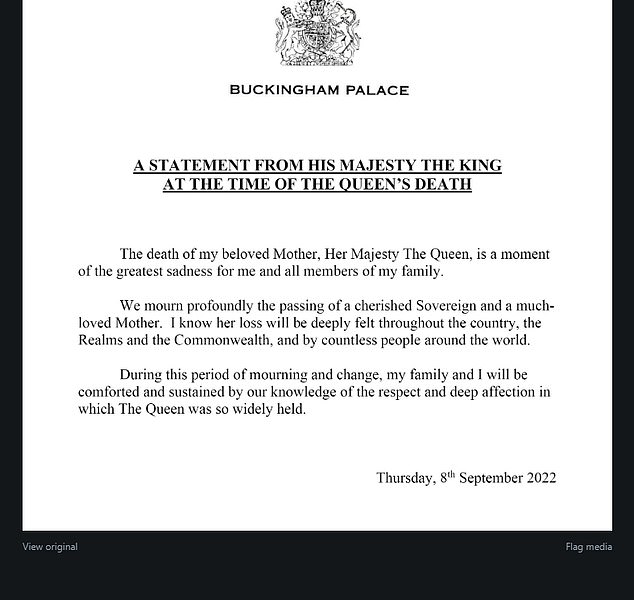 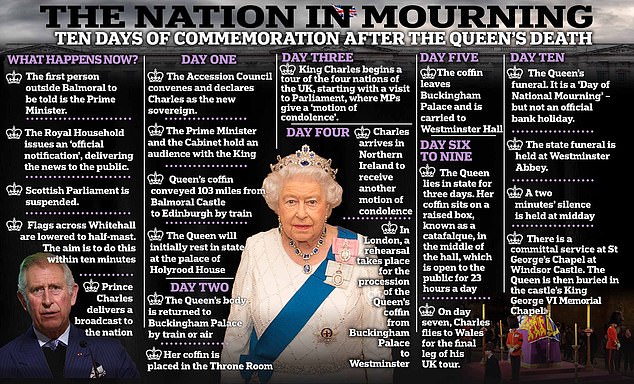