Queen Mother’s lady in waiting is going to war on woke: Lady Angela Oswald is starting with the slavery-obsessed National Trust which nearly got its hands on her family’s Elizabethan estate

What was to become of Burghley House, England’s greatest Elizabethan palace?

Turning the question over in his mind, Lord Burghley, the 6th Marquess of Exeter, reflected that it would soon prove too expensive to run. Looming large was the problem of death duties, the bane of nobility.

And yet he needed to preserve his ancestral home for the nation. With a heavy heart, he resolved to bequeath it to the National Trust.

How the Trust bigwigs must have salivated at the prospect. Magnificent 240-room Burghley near Stamford in Lincolnshire, for 500 years the residence of the descendants of William Cecil, chief adviser to Elizabeth I, would surely be the jewel in the Trust’s already dazzling crown. Negotiations faltered, however, almost as soon as they began.

Lord Burghley, then in his 70s, had been a fine athlete, winning gold at the 400m hurdles in the 1928 Olympics – exploits that were immortalised in the film Chariots Of Fire. 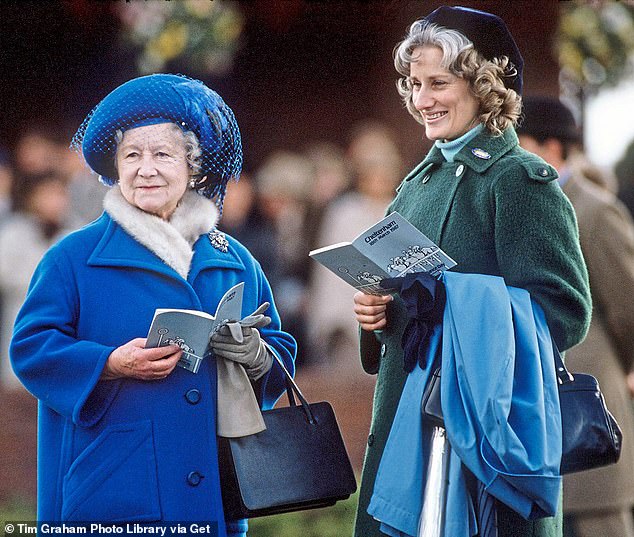 Lady Angela Oswald – one of Lord Burghley’s four daughters, and for many years a lady-in-waiting to the Queen Mother (above together at the races in 1987) – is horrified at the National Trust’s ‘woke’ agenda. Along with the rest of her aristocratic clan, she believes it is denigrating the nation’s history and posing a threat to its great houses 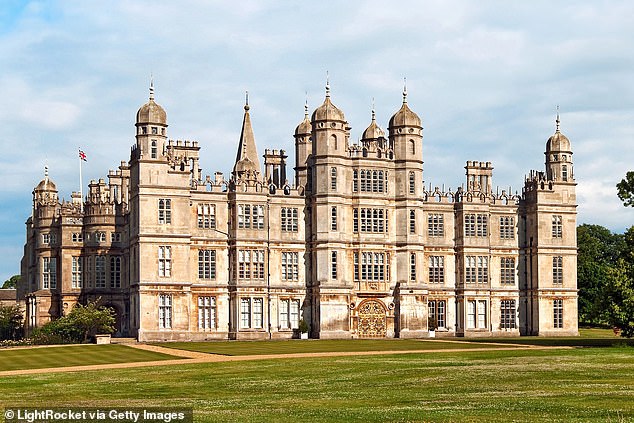 Lord Burghley, the 6th Marquess of Exeter, decided not to donate 240-room Burghley House which stood in for Windsor Castle in The Crown, to the National Trust. (Above, the magnificent property, near Stamford in Lincolnshire)

It never occurred to him that as well as giving the Trust the entire estate – comprising the house, its contents, including priceless artworks, and 10,000 acres of grounds with gardens designed by Capability Brown – he was required to provide millions of pounds in an endowment. Not surprisingly, he walked away.

Instead, his lawyer devised a better plan and set up both a charitable and a discretionary trust, which gained income from the estate and benefited the family, which was able to carry on living at the house. The estate, which hosts the annual Burghley Horse Trials, was saved.

Forty years on, and now successfully managed by one of Lord Burghley’s granddaughters, it continues to thrive, enjoyed by thousands of visitors every year. The house even appears in the latest season of the Netflix series The Crown, doubling for Windsor Castle.

Today, Lady Angela Oswald, one of Lord Burghley’s four daughters, and for many years a lady-in-waiting to the Queen Mother, is recounting the story of her father’s dilemma not, she says, as a ‘happy ever after’ but because she is making a stand.

She is horrified at the National Trust’s ‘woke’ agenda and, along with the rest of her aristocratic clan, believes it is denigrating the nation’s history and posing a threat to its great houses.

In an interview with The Mail on Sunday, she says: ‘Thank heavens Burghley didn’t fall into the hands of the National Trust. It sends shivers down the spine just thinking about it. Given the way things now are, my father would never in a million years consider giving it to them. He would be absolutely appalled.’

Lady Angela, 82, is referring to the controversies surrounding the Trust, in particular placing properties on a Black Lives Matter-inspired list of shame for their links to slavery.

‘The National Trust has changed significantly over the years,’ she says. ‘People weren’t woke in my father’s day, they weren’t always criticising other people.

‘I can’t see why anybody now would want to leave anything to them. Why would you want to put power into hands of people who abuse it?

‘To me, the way they are behaving is a betrayal of the people who trusted them to look after their properties.’

She agrees with aesthete and historian Sir Roy Strong’s assessment of the Trust – he said it was obsessed with ‘ticking the boxes of the disabled, the aged, LGBT and ethnic communities’.

Lady Angela, who is married to the Queen’s former stud manager, Sir Michael Oswald, is by no means an inveterate complainer. Lively and spirited, she is one of life’s optimists and prefers to put a positive spin on things. But Britain, she says, should not stand idle as woke warriors ‘poison practically every facet of British life’.

Already she has started waging a lone battle, dispatching missives and beseeching MPs, among others, to take action.

Lady Angela says: ‘Every day we are spluttering with fury because it’s so awful the way so many people behave, and the way people are penalised for expressing perfectly normal opinions. We always used to have free speech in this country and now we haven’t got it.’ 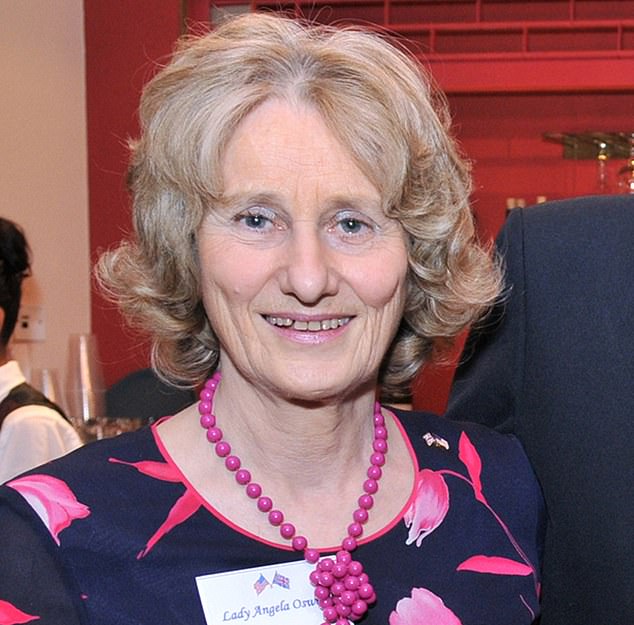 In an interview with The Mail on Sunday, Lady Angela (above) says: ‘Thank heavens Burghley didn’t fall into the hands of the National Trust. It sends shivers down the spine just thinking about it. Given the way things now are, my father would never in a million years consider giving it to them.’ She is referring to the controversies surrounding the Trust, in particular placing properties on a Black Lives Matter-inspired list of shame for their links to slavery

Lady Angela has enthusiastically embraced the ‘patriotic’ fightback launched last month by the Common Sense group of 60 Tory MPs and peers, led by senior backbencher and ex-Minister Sir John Hayes, who says: ‘It’s time to defend British traditions and values… to stand against the senseless woke whingers and the soulless militants who despise the best of Britain.’

How would Lady Angela feel about the National Trust interrogating Burghley’s past? As far as she is aware the mansion has no links to the slave trade.

As Downton Abbey creator Julian Fellowes discovered during the filming of ITV’s Great Houses, broadcast earlier this year, Burghley has a colourful history, however.

The first Lord Burghley is said to have secured the death of Mary Queen of Scots by persuading Queen Elizabeth that she should be executed. There were also stories of a young earl who killed a man, and a later Lord Burghley who reacted to his wife’s adultery by running away to Shropshire and remarrying bigamously.

‘Most of my forebears were involved in collecting fine art and were Olympic spenders. There were a lot of MPs too,’ says Lady Angela.

‘The National Trust could investigate Burghley as much as they like. I am all for everybody finding out about what is genuine history. And if they found anything not very nice, well that’s part of history too, but what I don’t like is when they investigate with a fixed view – as with the slavery issue – and with the intention of discrediting people.

‘They are destroying other people’s lives but not doing anything positive. Modern slavery is a big issue today. Why don’t they use their energies to do something about that? Yet they don’t seem to care. 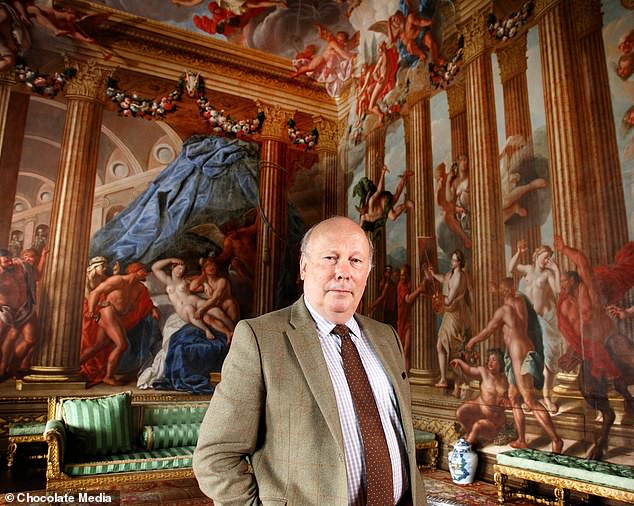 How would Lady Angela feel about the National Trust interrogating Burghley’s past? As far as she is aware the mansion has no links to the slave trade. As Downton Abbey creator Julian Fellowes (above) discovered during the filming of ITV’s Great Houses, broadcast earlier this year, Burghley has a colourful history, however

‘This obsession they have with our colonial past is quite extraordinary. All these people agitating forget that slavery has existed for thousands of years and still exists.

‘And although we had a bad record of transporting slaves to the Americas and the West Indies, who stopped that trafficking? It was the Royal Navy, and a lot of people gave their lives challenging the slave business at the time.

‘And yet the people who talk about Black Lives Matter, the ones being very woke, totally rule out the fact that it was this country that stopped it.

‘It horrifies me that they can be so one-sided. It’s this awful woke thing about never being able to see a different point of view from their own.’

She is saddened by what she sees as the anti-intellectual tenor of some student protests, ‘in particular the way they ban speakers they don’t agree with’.

To Lady Angela, such behaviour is at odds with centuries-old ideals of debate based on evidence and persuasion, and she has made plain her concerns in letters to university chancellors.

Another point of contention was the 2017 controversy over Felbrigg Hall in Norfolk, when unpaid National Trust guides staged a revolt after being ordered to wear rainbow lanyards and badges to celebrate the 50th anniversary of the legalisation of homosexuality.

Their objection was compounded by a decision to ‘out’ Robert Wyndham Ketton-Cremer, an intensely private poet and historian who donated the 17th Century property to the Trust after his death in 1969.

His alleged homosexuality was detailed in a five-minute film played to visitors and narrated by Stephen Fry. Lady Angela says: ‘When Mr Ketton-Cremer left Felbrigg, he expected the National Trust to look after his property. He did not want his sex life – whatever it may or may not have been – to be held up for public consideration. I find it mind-boggling.

‘And why should the Trust force people to wear badges? It would never occur to our totally open-minded trustees at Burghley to try to make people wear badges saying Gay Pride or anything else.

In the 1981 film Chariots Of Fire, Lord Lindsay, played by Nigel Havers, is based on Lady Angela’s father, who practised hurdling in the grounds of the house.

In 1927, his final year at Cambridge, Lord Burghley stunned observers by sprinting around the Great Court at Trinity College in the time it took the college clock to toll 12 o’clock. The feat was later wrongly credited to Harold Abrahams in the film, much to Lord Burghley’s chagrin.

Lady Angela retains vivid memories of the house from her childhood. ‘Granny was a great character. She had very high standards and was tough on people who fell below them but she was absolutely smashing. I loved her,’ she recalls.

‘The way of life there carried on as it had done for many years. One thing that really struck one was that there were still prayers in the chapel every morning and, interestingly, it was all done in the old-fashioned way: all the females sat on the left-hand side and all the men on the right-hand side.

‘I remember one morning I overslept and I was terrified I was going to be late for chapel. And I came running along the passages and rushing up the steps and old Arthur, the butler, was holding open the door and waving me on until, puffing and blowing, I arrived at the last minute and sank into my seat. Otherwise I’d have had such rockets from Granny.’

Discretion prevents Lady Angela, who now lives in Norfolk, discussing in detail her work with the Queen Mother, of whom she says: ‘She just loved people and people loved her. It was wonderful following in her wake because I could see and feel the waves of affection going both ways.’

What would the Queen Mother think about the National Trust woke controversy? Lady Angela emits a mischievous giggle. ‘I know exactly what she’d have felt about it, but I can’t say!’