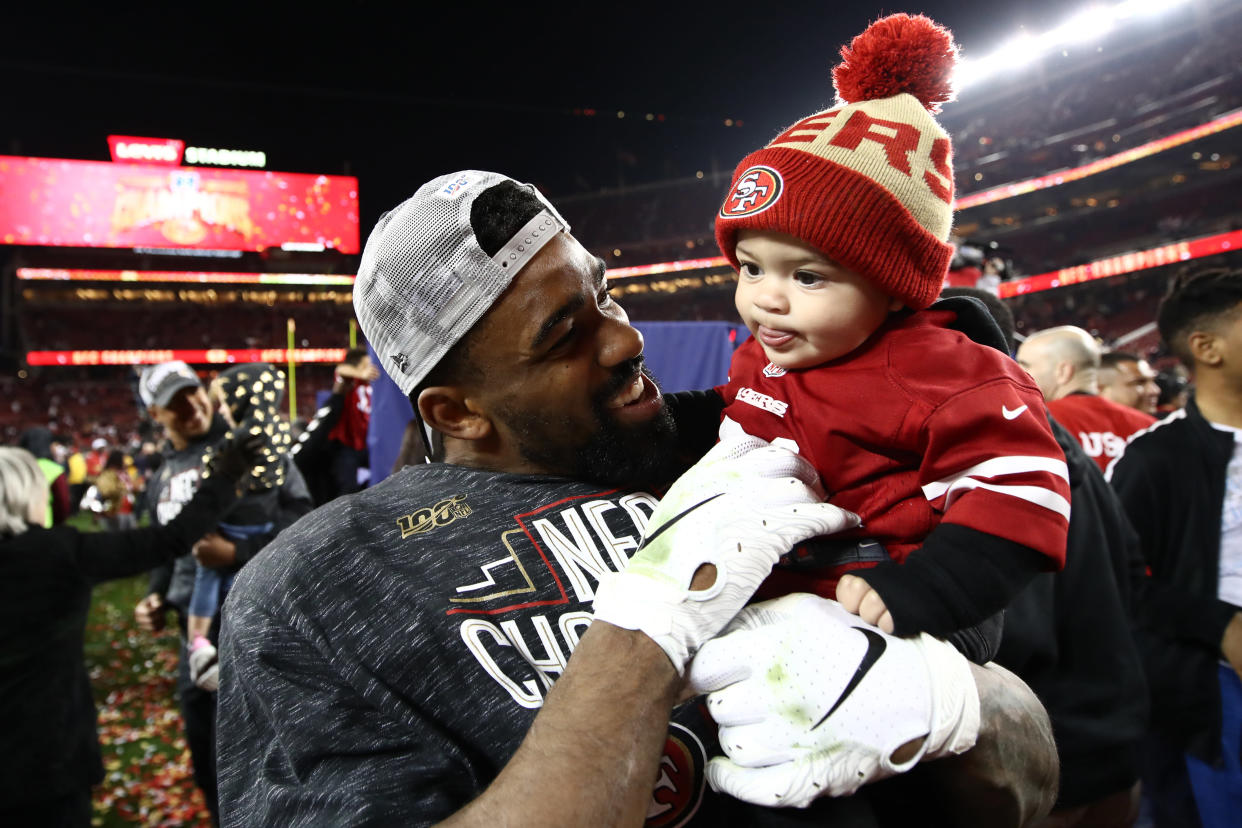 Devon Mostert, the wife of San Francisco 49ers running back Raheem Mostert, posted on Instagram Wednesday that she called 911 to send an ambulance for their young son who had developed a 103.5-degree fever.

She urged people to take COVID-19 seriously while describing the ordeal as "SO SCARY."

Devon Mostert, Raheem’s wife, urges everyone to take COVID seriously after their son was taken to the hospital with extreme symptoms. 🙏🏽 pic.twitter.com/6ZFrcO2EQ3

"If you think COVID is a joke, this is our sweet G man in an ambulance today after I called 911 because he was lethargic, skin was gray, lips were purple, and had a 103.5° temperature. I'm crying even typing this … this is all SO SCARY.

"We are thankfully back home, but my family is very much in the thick of it. I'll update you more soon. But this is literally my CRY for you to take COVID seriously."

Raheem has expressed caution about COVID-19

The 49ers placed Raheem — who's missed all but one game this season with a knee injury — on the NFL's reserve/COVID-19 list on Monday. He's repeatedly expressed a cautious attitude about COVID-19.

He withdrew from an autograph session on March 4, 2020, citing COVID-19 concerns. That was a week before the NBA suspended its season amid its first known coronavirus case, an event that signaled the beginning of the U.S. pandemic shutdown.

Their son Gunnar was 8 months old at the time and is presumably the "G" who Devon wrote was hospitalized. Devon has since given birth to their second son Neeko in September 2020.

Raheem told the Sacramento Bee after Neeko's birth that he was isolating himself from his young children in an effort to protect them from COVID-19 while he was traveling with the 49ers.

"Right now, it’s definitely difficult just being away from my family,” he told the Bee in October 2020. “When we had our first son, I was able to hold him and stuff like that, just hold him with one hand, hold his little butt right on my chest. For me not to be able to do that with my second son is kinda rough on me. And I talked with my wife about it last night. We just had a long talk and shared those moments because she’s doing it for me.”

The Mosterts announced last week that Devon is expecting their third son. The family hasn't provided an update on Gunnar since Devon's initial Instagram post. Their ordeal is relatable to other parents of young children as a COVID-19 vaccine for children 5 years old and younger has yet to be approved amid the rapid spread of the Omicron variant.