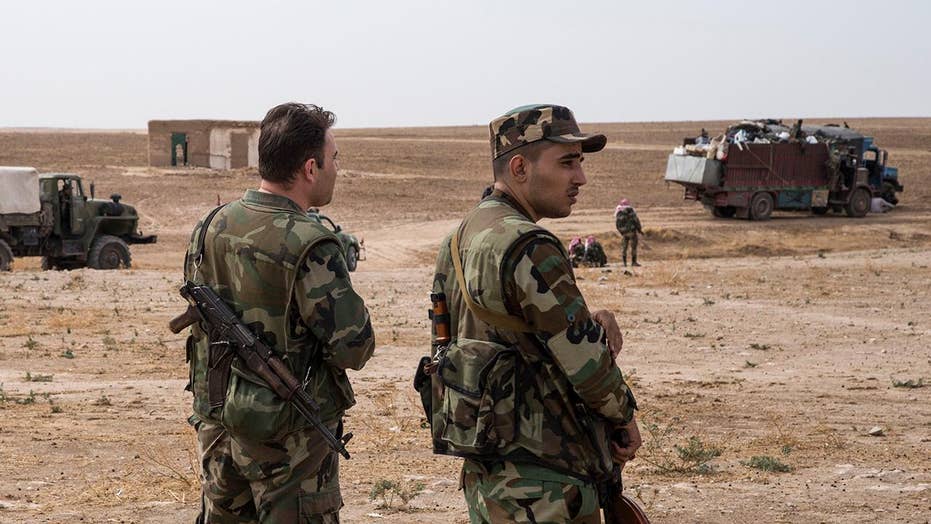 Russia fills void left by US in northern Syria

The Russians have become the power brokers on the ground the only ones able to talk to the Syrian regime, the Kurds, the Iranians and the Turks; Benjamin Hall reports from northern Syria.

NORTHERN SYRIA – There’s a strange feeling across this region. People are stuck between war and peace, between what came before – the optimism and freedom of defeating the Islamic State caliphate – and the unknowns of what comes next as Russian, Syrian and Turkish troops move in and U.S. troops move out.

For the moment, everything is being held together by a fragile cease-fire, which few Syrians here think will hold.

Russian forces are mobilizing across northern Syria not far from where we are, by air and by land – filling the U.S. vacuum and deploying along parts of the Turkish border, part of their agreement to carve up the region with Turkey. Now, they’re insisting all U.S. troops must leave Syria.

But in a surprise announcement, and one which could drastically change the fast-changing dynamic yet again, U.S. officials now tell Fox News the Pentagon has been looking to send armored units, including tanks, back in – supposedly to guard oil fields.

President Trump later tweeted, “Perhaps it is time for the Kurds to start heading to the Oil Region!”

Speaking earlier, Defense Secretary Mark Esper lashed out at Turkey: "Look, I've been very candid about this. Turkey put us all in a very terrible situation. I think the incursion was unwarranted.”

He added that Turkey was “heading in the wrong direction,” drawing closer to Russia.

But Kurdish leaders, out of necessity, have been looking to Russia for protection. Gen. Mazloun Abdi, the commander-in-chief of the Syrian Democratic Forces (SDF), spoke to Russian Defense Minister Sergey Shoygu via Skype on Thursday, saying, “I would like to appreciate specifically President Putin’s efforts in protecting our people and stopping the military operations.”

That came a day after he thanked Trump, saying through a spokesman he was grateful for the president's "tireless efforts that stopped the brutal Turkish attack and jihadist groups on our people.”

Still, Turkish jihadist proxies were carrying out some attacks on Thursday, clearly violating that cease-fire with mortars, drone strikes and gunfire. It remains to be seen if these escalate or not, but many people here have acknowledged this has been a delicate time.

NATO Secretary General Jens Stoltenberg said in a statement Thursday, “The situation is still fragile, but at least we have seen some progress by the fact that we have seen reduction in violence over the last days.”

Across northern Syria, streets and shops have remained empty with over 100,000 displaced. The Kurds simply have not trusted Turkey to maintain the cease-fire and have continued to look for protection wherever they they can find it.

And so the Kurds are waiting to see what happens next. When ISIS fell, thanks in large part to them, they looked forward with optimism to setting up a free, democratic and liberal homeland. That hope has gone – and it’s not clear yet who or what will replace it.

Fox News will be on the ground as the story unfolds.