There is a fresh sense of renewal in the air on troubled Fitzroy Street.

The pandemic has put more locals back on the St Kilda shopping strip as some landlords offer free rent to fill vacant shops and a new centre for LGBTQI people prepares to open. 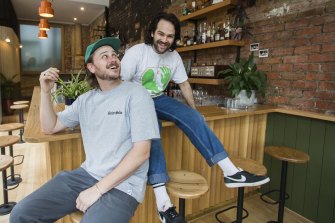 Loc Fortune (left) and Justin Lustman, owners of Chronicles Bar on Fitzroy Street, St Kilda. Chronicles Bar is one of a handful of businesses to open on the street this year.Credit:Paul Jeffers

The CBD’s misfortune could be Fitzroy Street’s opportunity as office workers stay home in the beachside suburb, says the president of the strip’s business association, David Blakeley.

“It's really flourished since COVID,” he said.

“[We want] to get more daytime trade.”

Lined with palm trees, it begins with parkland made world-famous by a Formula 1 race and ends with picturesque views of Victoria’s busiest beach. 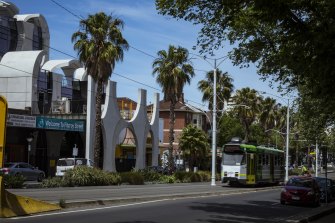 Not only is it in one of the state’s most densely populated suburbs, it borders one of the city’s most affluent – St Kilda West.

Yet a walk down the southern end of Fitzroy Street on a late Saturday morning in December revealed it was virtually deserted apart from a rough sleepers’ camp, with rows of empty or shut shops. The backpackers who used to populate it had until Monday been unable to travel to Victoria.

Albert Park MP Martin Foley said Fitzroy Street’s time as a nightclub spot was over and that it needed business investment to capitalise on young professionals working from home. 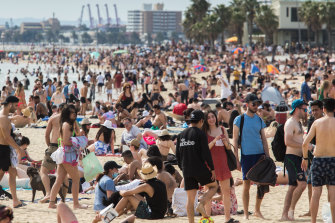 “It's really at the crossroads of what its future’s going to be,” the state government minister said.

According to Port Phillip Council, the vacancy rate between Grey Street and the Upper Esplanade has hovered about 30 per cent for the last few years and not much lower in the ones before that.

But in perhaps a symbol of better times, new bar Chronicles has opened on the site of the much-loved bookshop of the same name.

It’s been said that Fitzroy Street’s demise can be traced back to when the independent bookshop’s owners were priced out in 2009 and replaced with a yoghurt shop that lasted six weeks and the building stood empty ever since.

Chronicles owners Justin Lustman and Loc Fortune, who met working at Curtin House’s The Toff and welcomed their first sit-in customers in November, have created a bar for locals – many of whom have packed out the venue ever since.

“[Fitzroy Street] has passed it's time with a transient-like customer base and backpackers,” Mr Lustman said.

“All these people that moved here 15, 20 years ago … moved here because it was such a cool, incredible happening suburb.

“Ten years later, [they] have kids and are young families or young professionals and they aren’t really after the 5am going out and getting loose every morning anymore – they are after more of a mature offering.”

Fitzroy Street’s ills have been blamed on everything from expensive rents and parking to rough sleepers.

The 2017 closure of the Gatwick Hotel, a crime-ridden private rooming house on the west side on the street, was hoped to be the panacea, but it’s disadvantaged population has remained.

The strip has long been a heady mix of stylish, grungy, well-heeled and edgy. But as its renowned nightlife largely moved to the city over the past few decades and it was flooded with takeaway shops serving backpackers, it’s underbelly stood out.

Most recently, rough sleepers from the state government’s hotel homeless program have been visible on the street.

Port Phillip councillor and Liberal member Andrew Bond said they had been causing problems for the local community and needed better support services.

Mr Foley, who has held Albert Park since 2007, said new or wealthier residents needed to accept the suburb’s socio-economic diversity and see it as a strength.

“A small minority … have demonstrated a long and well resourced effort to turn St Kilda into Brighton and they’ve failed,” he said.

Mr Blakeley said as locals returned to the street, it's social issues would be less noticeable.

For Mr Lustman: “the problems are less with those surface area problems and more with … what is on offer.” 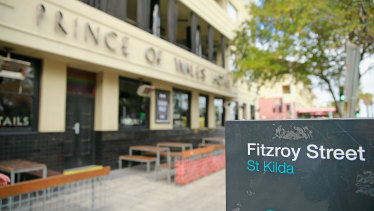 Venues such as The Espy and The Prince have been gentrified causing a shift away from St Kilda for live music. Credit:Scott Barbour/Fairfax Media

Backpackers haunts or late-night venues Cushion Lounge, Elephant and Wheelbarrow, Robarta and the Saint Hotel have all recently shut their doors.

Meanwhile, seven more new and renewed venues have opened in the precinct during the pandemic, including a refurbished upmarket Prince Hotel and oyster bar Blu, and four more are soon to come. Almost all are eateries or bars.

Port Phillip Council and the Fitzroy Street Business Association have funded Renew Australia to fill the strip’s empty storefronts with rent-free pop-up shops. The idea is to encourage a daytime trade by bringing in a mix of retailers.

The organisation, which is responsible for reviving Newcastle following the 2008 financial crisis and has similar projects in Geelong and Wollongong, organises 30-day rolling licence agreements with landlords, who can keep up for-lease or for-sale signs.

Project manager Dan Dealy-Hewitt said it was hoped many of licensees would become permanent ventures, bringing life back to the strip in the meantime.

“We'll be incubating projects from artists, studios, galleries, designers to entrepreneurs … or small businesses that want to trial in a space where they don't want to be tied down by long term commercial leases,” he said.

Six properties, between Jackson and Acland streets, have signed up to the project so far and Mr Dealy-Hewitt is reviewing applications to fill them.

Retail expert Martin Ginnane, who put Fitzroy Street’s vacancy rate at 21 per cent, but up to 40 per cent at the beach end, said rather than "artsy starts-up", the strip needed quality daytime attractions to lure in well-heeled residents from West St Kilda and those who move into Tim Gerner’s luxury Saint Moritz apartments around the corner.

“It needs to change with the demographic. Otherwise they're going to drive out of their apartments … and have nothing to do with the communities they live in,” he said.

There is widespread hope the opening of the state government’s $30 million Victorian Pride Centre on the corner of Jackson Street early next year will help bring back a sense of community to Fitzroy Street.

“It’s the problem child, historically, but it's on the cusp of a whole heap of things coming together,” Mr Foley said.

“It's got one big chance. It's in our collective hands.”