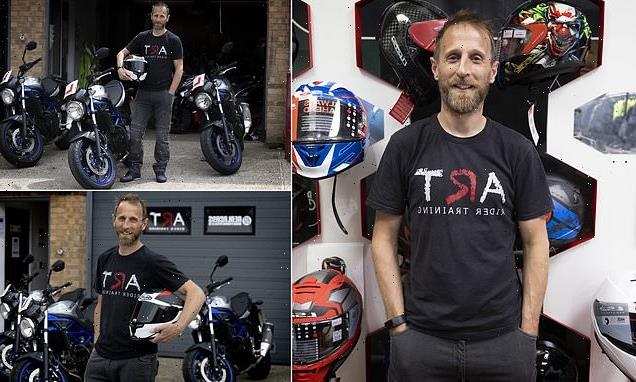 Revving up sales after lockdown! Motorbike training business goes up a gear with targeted, affordable advertising on MailOnline

Motorbikes have always been Rich Woolgar’s passion – from the moment he rode pillion on the back of his dad’s bike when he was just 10 years old.

So when the opportunity arose to buy a motorbike training school in 2016, he quit his full-time job and leapt at the chance.

Rich, 44, from Hornchurch, Essex, spent four years working hard to build up Art Rider Training, in Laindon, Basildon, into a highly regarded facility, offering training courses for everyone, from beginners to advanced. 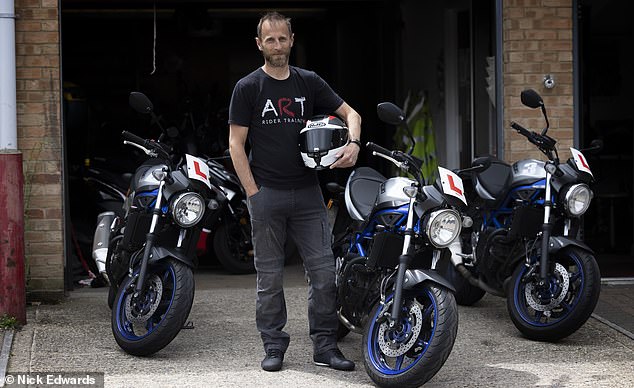 With a dedicated team, the five-star reviews from customers poured in, and Rich made the decision to invest in transforming his unit, introducing a motorbike accessories and clothing store, and stocking some of the UK’s biggest brands.

However, when coronavirus hit in March 2020, Rich – just like thousands of other SMEs that were deemed ‘non-essential’ – had to close his doors and walk away, not knowing when, or if, he’d be able to reopen.

Rich, a DVSA-qualified instructor and father of one, said: ‘I love motorbikes – from instructing at Silverstone to teaching a 16-year-old how to ride on their CBT (compulsory basic training).

‘I’m really passionate about making riders safe on the road, as well as passing on my skills to others, so the idea of doing something that I loved every day was very appealing.

‘So after working hard for years, when the lockdown announcement came and we had to close, of course I was scared for the future.

‘I was gutted for my team as well. And concerned for all those customers who were already booked in for tests and training.

‘The phone has been going crazy’

‘The company earnings went to zero overnight. Thankfully we qualified for Government help, so that helped to keep things afloat and took away some of the pressure and stress.

‘When we reopened, we had a rush of bookings thanks to our loyal customers who had waited to continue or start their training with us.

‘We then went through two more lockdowns – each time with the same uncertainty. Thankfully, each time we reopened, our customers were just as eager as we were to get them back in the driving seat.’

Rich then had to put special measures in place to ensure his training sessions met social distancing rules, with the safety of his customers paramount. This meant reducing the amount of students per training session.

He also had to minimise the number of customers in the shop, close his changing room, and promote click and collect as much as possible.

‘I did everything to ensure we could trade as much as possible – we didn’t take any risks with customer safety, and thankfully we didn’t have any Covid cases.

‘Marketing has had to take a back seat, but now we’re up and running again and lockdown restrictions have eased, I’m keen to take the company forward again.’

It’s with SMEs, like Rich’s, in mind that MailOnline has launched a new advertising platform called Ad Manager, which allows entrepreneurs to focus on the customers they want to attract.

For companies that are focused on a particular product or service, the platform is ideal, as it allows you to target the website’s vast audience of 25 million readers by postcode, interests and life stage.

Rich was one of the first business owners to use Ad Manager – building two campaigns for Art Rider Training in less than an hour; and they were both live just 12 hours later. 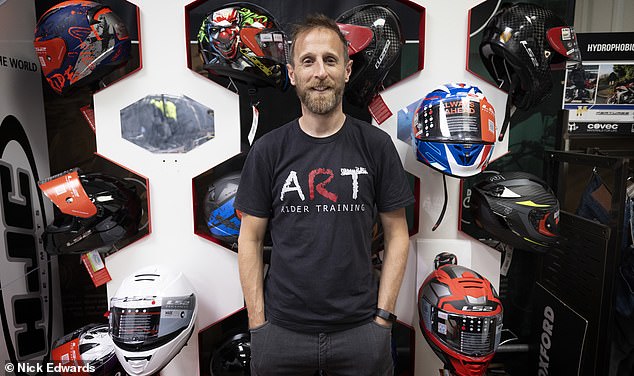 Rich got his campaign live on MailOnline’s Ad Manager within 12 hours, and said it was simple

‘I’ve used various online platforms before and would have never thought I could advertise on a huge, global platform such as MailOnline, it’s an amazing opportunity for small businesses like mine.

‘The system is so simple to use – it took me about an hour to create two campaigns. I did it in the evening, and the following morning they were both live on MailOnline; you can’t ask for more reactive than that!’

Rich’s adverts had more than one million impressions in just four days, with a surge in traffic to his website too.

‘I was able to target Essex, Kent and London with the campaign, which is perfect for our audience,’ he said.

‘Thanks to the adverts, I’ve seen a spike in website traffic, with more than 100 clicks in just the first two days. The phone has been going crazy. I’ve had bookings from the London area too, which I know is a direct result of the campaign.

‘I’m over the moon. The fact our advert has been seen by a million people in such a short amount of time is brilliant – that type of brand awareness, on such a global platform is incredible.’

MailOnline’s new easy-to-use Ad Manager system allows you to advertise to more people in your area than your local titles can reach.

There are no hidden fees, and you can control everything, from budget to target audience to creative design.

Here’s how you can advertise YOUR small business on MailOnline:

Rich Woolgar always knew he wanted to run his own business instead – but was looking for the right opportunity.

As well as being a CBT instructor, the 44-year-old also enjoyed track days at the UK’s biggest circuits, including Brands Hatch, Silverstone and Cadwell Park, as well as bike trips to Europe.  But he worked full-time as a manager for a stationery supplies firm.

However, in 2016, a friend was scrolling on Gumtree, and found an advert for a motorbike training company for sale, close to where Rich was living in Essex. At first, he thought it might be too good to be true.

‘A mate showed me the ad, and my first question was ‘is this genuine?

‘But after following it up, Art Rider Training, which was then being run by a couple who wanted to sell the business to buy a yacht and sail around the world, was definitely for sale.

‘I managed to get the funds together, taking out a loan, and just weeks later, I was handed the keys to the unit, and took over as managing director. Dedicated: ‘We’re a small, local company and we deliver a top customer experience’

‘It was a lot of blood, sweat and tears in the beginning – as anyone who takes over an existing company will agree – but after a year or so, I’d found my feet and the business began growing.

‘I wanted to put my stamp on it, so I made sure customer service was paramount, the unit was given a modern makeover, and I introduced a shop, selling motorbike clothing and accessories.

‘This included brands such as Alpinestars, Oxford Products, LS2 and HJC helmets.’

Rich was also able to expand, bringing on new instructors and taking part in popular local events, such as motorcycle runs and fun days, as well as safety campaigns alongside the DVSA and Motorcycle Industry Association.

‘We want to be the M&S of motorcycle training. Yes, we’re a small, local company, but that’s no excuse to not deliver a top customer experience and quality products.’