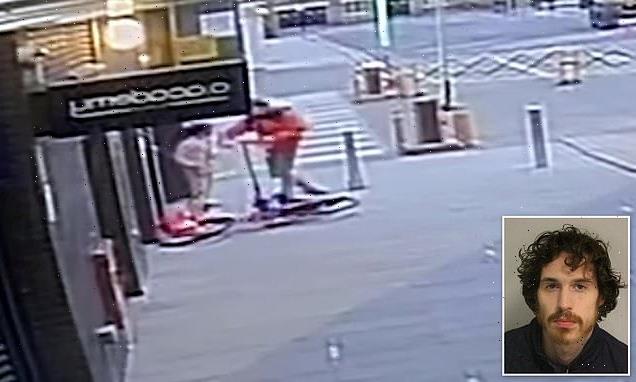 This is the shocking moment a robber threatened to stab an 11-year-old girl before stealing her electric scooter.

‘Dangerous’ Adam McGeady struck during a brazen daylight attack on a street in Islington, north London.

Footage of the terrifying ordeal shows the 32-year-old ambushing the schoolgirl as she walks along the pavement.

McGeady blocks the girl’s path with his bike and threatens to stab her. He then yanks the scooter off her and rides off, leaving his bicycle behind. 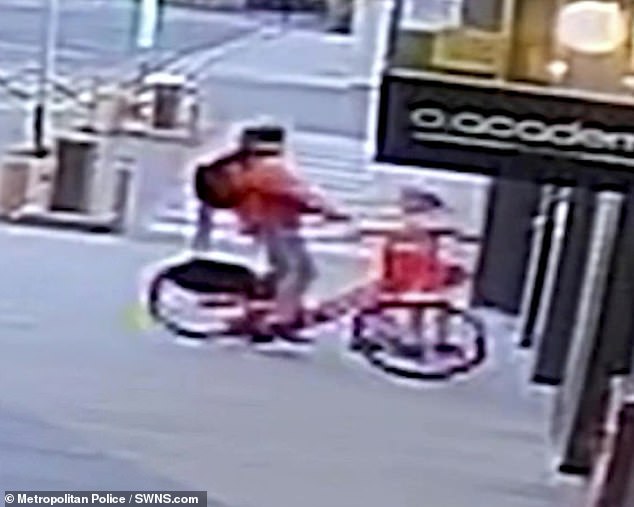 ‘Dangerous’ Adam McGeady struck during a brazen daylight attack on a street in Islington, north London. He used his bike to block the girl’s path before stealing her scooter 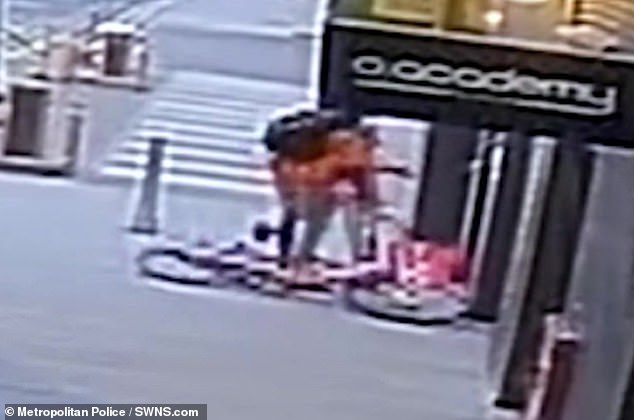 The 32-year-old robber McGeady was pictured wrestling with the 11-year-old girl during the attack in Islington, north London 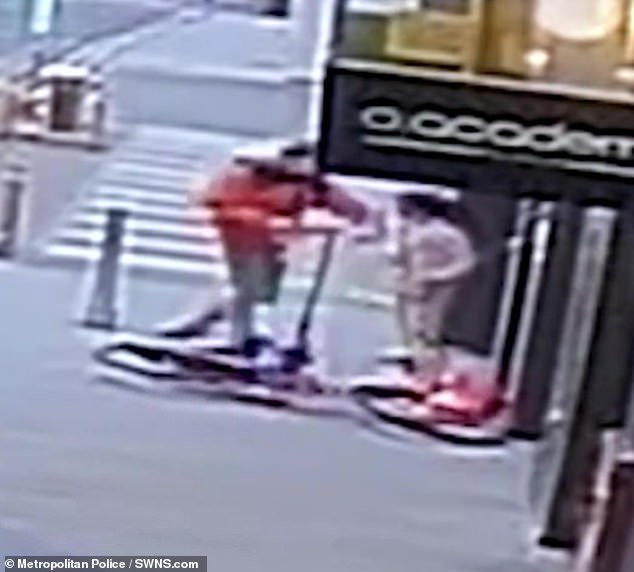 At one point, McGeady threatened to stab the schoolgirl if she didn’t hand over her e-scooter 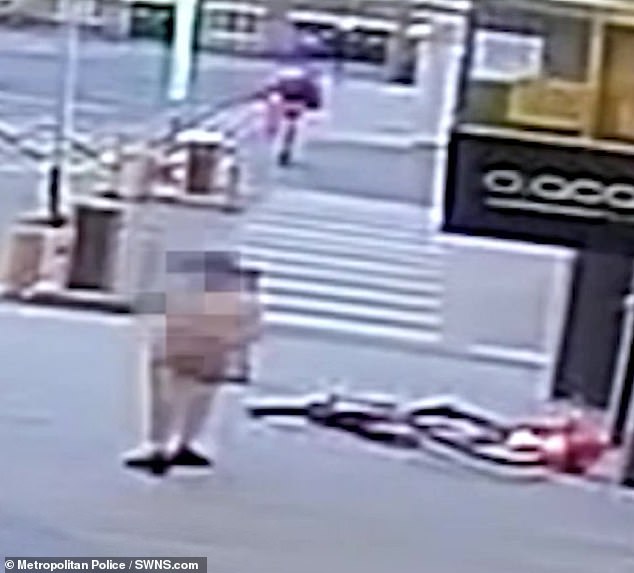 After ripping the scooter away from the girl, McGeady rides off on it, abandoning his bike and leaving his victim watching on,  shaken but unhurt 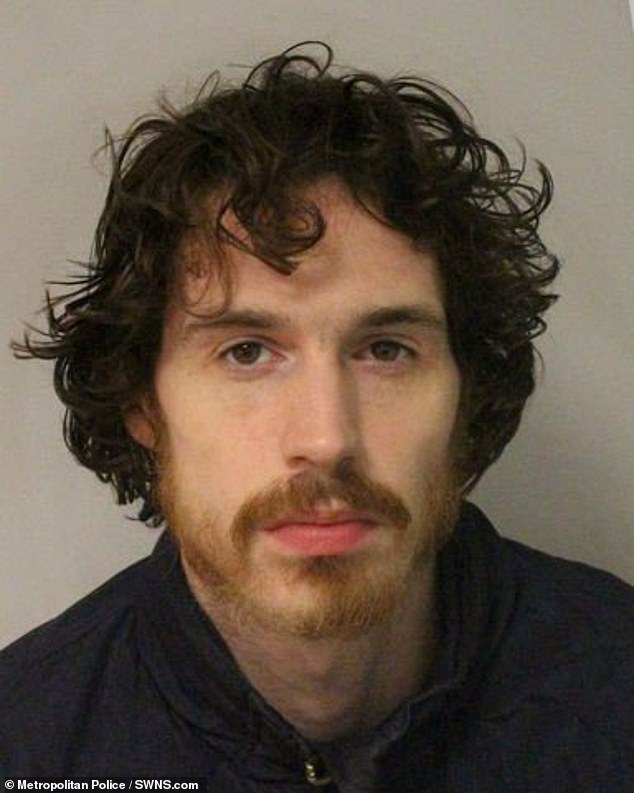 McGeady, pictured, pleaded guilty to robbery and has been jailed for three years and nine months

Fortunately the girl was left shocked but otherwise unharmed by the ordeal.

McGeady, of Stoke Newington, north London, pleaded guilty to robbery and was jailed for three years and nine months.

A Met police spokesperson said: ‘A brazen robber who threatened to stab an 11-year-old girl before stealing her e-scooter in Islington has been jailed.

‘Adam McGeady, 32, of the Mayville Estate, N16, was sentenced to three years and nine months’ imprisonment at Snaresbrook Crown Court.

‘At around 6.15pm on September 24, 2020, the victim was riding an electric scooter in Parkfield Street when she was approached by McGeady on a bike.

‘He threatened to stab her before taking the scooter and riding off. Thankfully the girl wasn’t injured, however she was shaken.’

McGeady was caught on CCTV and arrested in January, 2022 after being recognised by police. He later pleaded guilty to robbery. 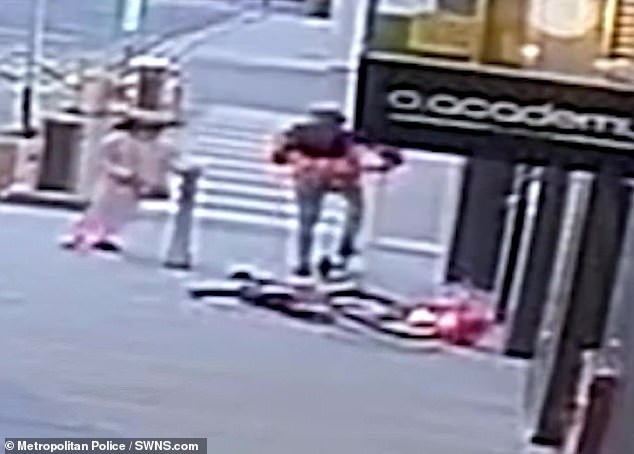 Police have since praised the bravery of McGeady’s 11-year-old victim, pictured here watching McGeady ride away on her scooter 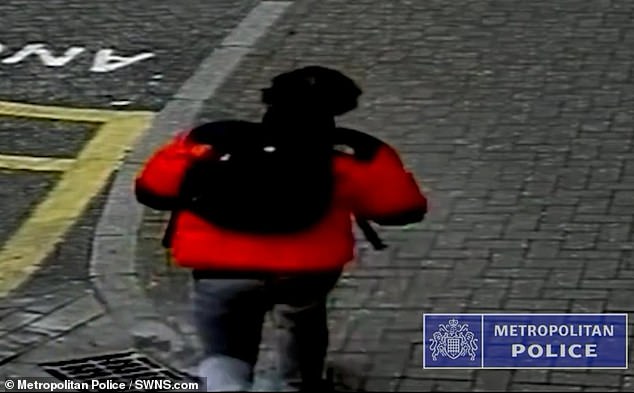 McGeady was tracked down using CCTV and arrested in January 2022

Speaking after McGeady’s sentencing, Detective Constable Richard Roberts, from the local policing team in Islington, said: ‘This would have been a terrifying ordeal for a victim of any age, but it was particularly upsetting for a child.

‘I would like to praise her for the bravery she has shown throughout our investigation.

‘McGeady is clearly a dangerous offender and I am pleased that our investigation has resulted in him receiving a custodial sentence.

‘I hope this sends a clear message that we will not tolerate such appalling behaviour on the streets of Islington.’

16/12/2022 World News Comments Off on Robber threatens to stab girl, 11, before stealing her e-scooter
Lifestyle