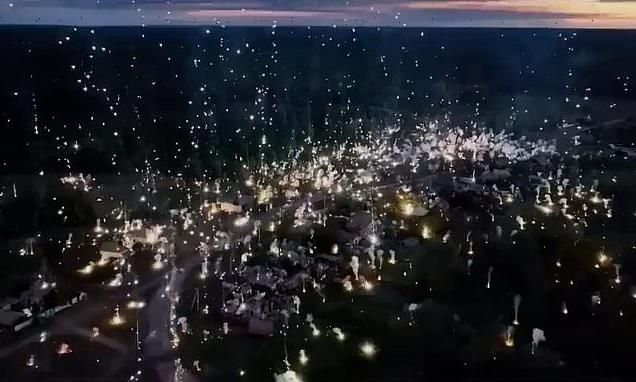 A terrifying cascade of Russian incendiary shells has rained down on a Ukrainian village in apocalyptic footage shared by its defence ministry.

The recently liberated village of Ozerne in Donetsk was targeted by Kremlin forces just days after it was recaptured amid Kyiv’s stunning counter-offensive, Ukraine claims.

Their footage shows countless shells raining down the village, hitting buildings and lighting up the streets.

The Ministry of Defence (MoD) shared the video yesterday, saying: ‘Russian 9М22S incendiary shells falling on the recently liberated village of Ozerne in the Donetsk region.’

Ozerne is a village in the Bakhmut Raion in Donetsk Oblast in eastern Ukraine.

The 9M22S shell, typically used by vehicles such as the BM-21 ‘Grad’ multiple launch rocket systems, is designed to be used against flammable targets and personnel.

The move, which seriously escalates Moscow’s standoff with the West, comes after Russia suffered a battlefield reversal in northeast Ukraine.

The 9M22S shell, typically used by vehicles such as the BM-21 ‘Grad’ multiple launch rocket systems, is designed to be used against flammable targets and personnel 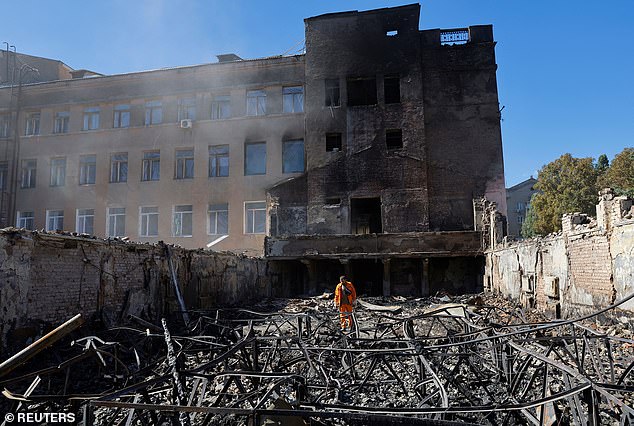 In a post on social media addressed to Putin, DPR head Denis Pushilin wrote: ‘I ask you, as soon as possible, in the event of a positive decision in the referendum – which we have no doubt about – to consider the DPR becoming a part of Russia.’

Earlier on Tuesday, Russian-installed officials in the southern Kherson region, where Moscow’s forces control around 95 per cent of the territory, said they had also decided to hold a referendum.

Pro-Russian authorities in part of Ukraine’s Zaporizhia region were expected to follow suit.

Ukraine and the United States have said such referendums would be an illegal sham and have made clear that they and many other countries would not recognise the results. 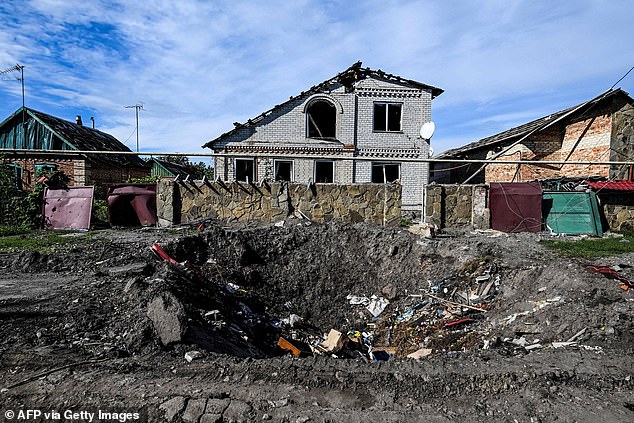 A photo shows damaged houses and a crater in the ground in Siversk, Donetsk region 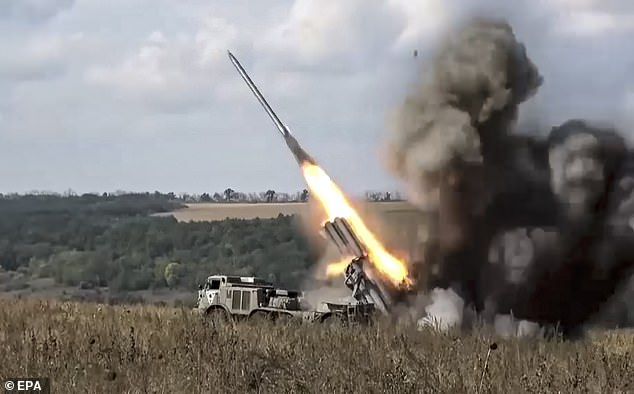 A BM-27 Uragan multiple-launch rocket system of Russia’s Central Military District fires at an undisclosed location in the Donetsk region, 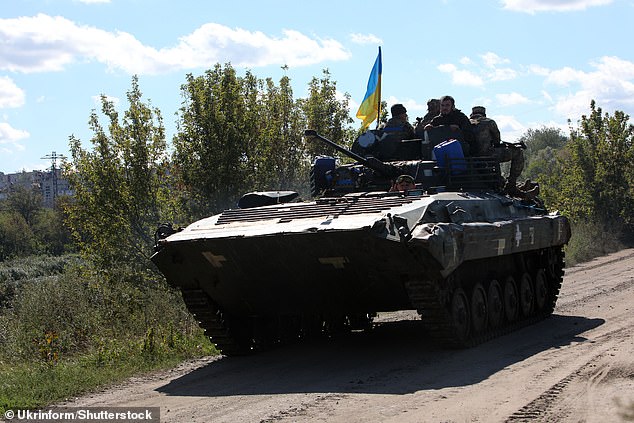 Ukrainian servicemen ride on top of a military vehicle in Izium, liberated from Russian invaders

Dmitry Medvedev, a former president who is currently deputy chairman of the Security Council, suggested before the announcements that the outcome of such votes would be irreversible and give Moscow – which has the largest stockpile of nuclear weapons in the world – carte blanche to defend what it would regard as legally its own territory.

‘Encroachment onto Russian territory is a crime which allows you to use all the forces of self-defence,’ Medvedev said in a post on Telegram. ‘This is why these referendums are so feared in Kyiv and the West.’

No future Russian leader would be able to constitutionally reverse their outcome, he added.

Vyacheslav Volodin, the head of Russia’s State Duma, the lower house of parliament, said that his chamber would support the two regions joining Russia if they voted to do so.

Washington and the West have so far been careful not to supply Ukraine with weapons that could be used to shell Russian territory, and Medvedev’s interpretation of what de facto annexation would legally mean from Moscow’s point of view looked like a future warning to the West.

‘They (the referendums) would completely change the vector of Russia’s development for decades. And not just of our country. The geopolitical transformation of the world would be irreversible once the new territories were incorporated into Russia,’ he wrote. 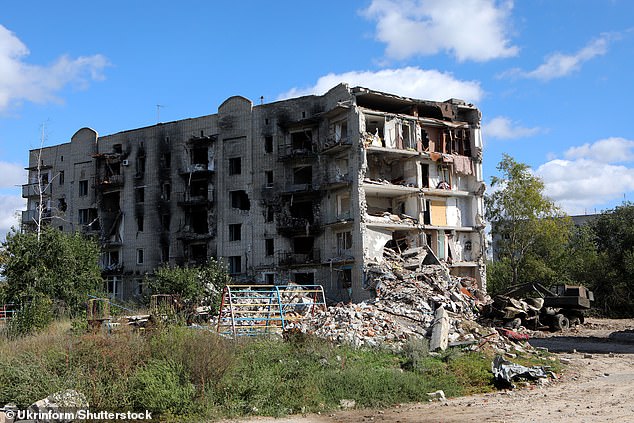 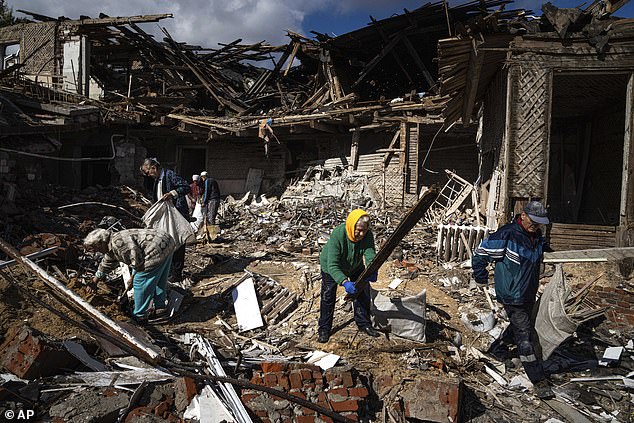 It is unclear how the referendums would be held given that Russian and Russian-backed forces control only around 60% of the Donetsk region, while Ukrainian forces are trying to retake Luhansk.

Pro-Russian officials have previously said the referendums could be held electronically.

The move would come eight years after Russian annexed the Crimean peninsula from Ukraine.

The referendums were announced after Ukraine said its troops had retaken the village of Bilohorivka in the Luhansk region and were preparing to recapture all of the province which until now had been fully occupied by Russian forces.

Unverified footage on social media showed Ukrainian forces in the village, lying 6 miles west of the city of Lysychansk, which fell to the Russians after weeks of fighting in July.

‘There will be fighting for every centimetre,’ Luhansk governor Serhiy Gaidai wrote on Telegram. ‘The enemy is preparing their defence. So we will not simply march in.’

Russia named taking full control of Luhansk and the neighbouring province of Donetsk as primary goals of what it called its ‘special military operation’ in Ukraine, alleging that Russian speakers there were being persecuted and even shelled by Ukrainian government forces, something Kyiv denied.

Ukrainian troops started to push into Luhansk after driving Russian forces out of northeastern Kharkiv province in a lightning counter-offensive this month.

‘The occupiers are clearly in a panic,’ Ukrainian President Volodymyr Zelensky said in a televised address late on Monday, adding that he was now focused on ‘speed’ in liberated areas.

‘The speed at which our troops are moving. The speed in restoring normal life,’ Zelenski said.

The Ukrainian leader also hinted he would use a video address to the United Nations General Assembly on Wednesday to call on countries to accelerate weapons and aid deliveries.

Reuters could not independently verify either side’s battlefield reports.