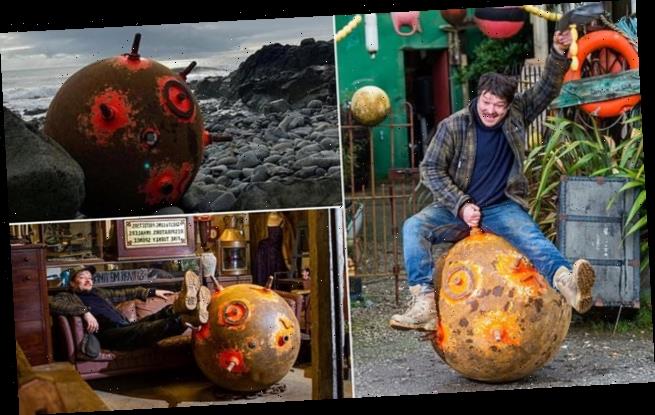 A salvage yard owner who rolled a washed-up sea mine back home to use as a footstool has been forced to hand it back to the Royal Navy.

Joe Gray, 43, found the massive mine on rocks at Perranuthnoe near his home in Penzance, Cornwall this month and rolled it up the beach to use as the centrepiece of his salvage yard Shiver Me Timbers.

The mine contained no explosives and had come free after being used in a training exercise by the Navy off the coast of Plymouth last year, coastguards told him.

Mr Gray was originally instructed by the Government’s Receiver of Wreck team that he could keep the bomb if it was unclaimed after one year.

But his dreams of permanently owning the training mine were dashed this week after the Royal Navy visited him yesterday to reclaim it. 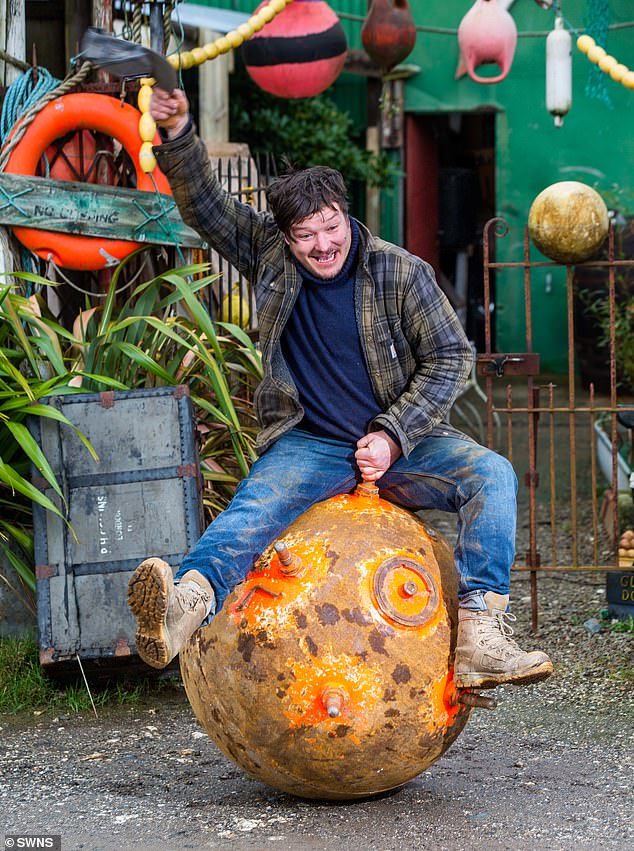 Joe Gray with a sea mine at his antique shop Shiver Me Timbers, near Penzance in Cornwall 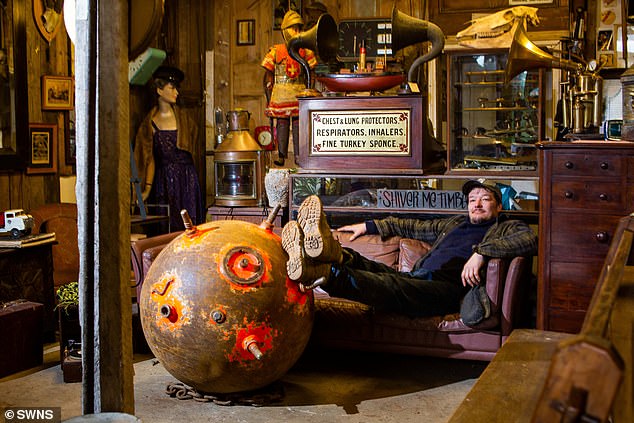 Joe Gray, 43, wanted to keep the device and make it the centrepiece of his quirky collection 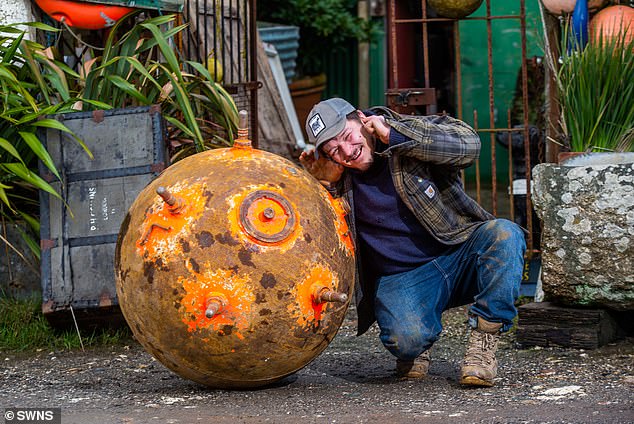 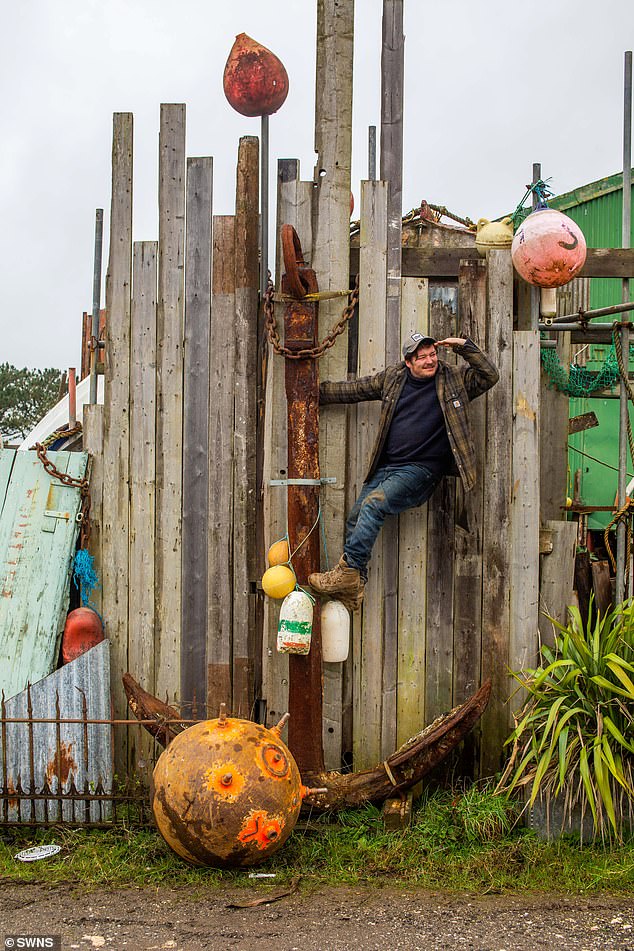 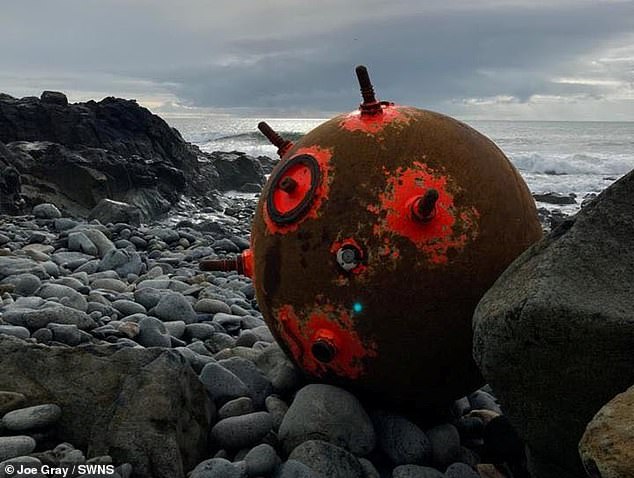 For two weeks, he used the mine to put his feet up on and as a coffee table

Sea mines: What are they, how do they work, and when have they been used?

They are deposited and left to wait until they are triggered by the approach of, or contact with, a vessel.

There are several kinds of mines, including:

Sea mines are thought to have been invented by David Bushnell during the American Revolutionary War in 1777 after he set adrift floating torpedoes in the Delaware River against UK ships.

They were initially sparingly used until the American Civil War, when the world saw the first large-scale use of these explosive torpedoes.

During World War I, naval mines became a primary weapon against the deadly and feared German U-boats.

The Allies laid what is known as the ‘North Sea Barrage’, a minefield that extended 250 miles from Scotland to Norway in 1918. In five months, American and British forces were able to plant 72,000 mines.

During World War II, mines became a highly effective and strategic weapon, most famously used during the Battle of the Atlantic.

The US also carried out a massive minelaying operation near the end of the war in the Pacific that involved laying 12,000 mines blocking Japanese shipping routes and sinking 650 enemy vessels.

‘As soon as I heard a mine had washed up, I was so excited – I dropped what I was doing and came running. It isn’t to everyone’s taste, but when I saw it, I couldn’t believe my eyes.

‘Obviously I didn’t go anywhere near it until I knew it was safe – but as soon as I knew what I was dealing with, I couldn’t wait to get it back to the shop.

‘I thought if I could keep it, I might have it turned into a unique stove or a piece of artwork, but that wasn’t to be because the Navy wanted it back. I’ll just have to hope another one washes up.’

Mr Gray said he was able to proudly display the mine in his yard, and even in his home, for just under two weeks.

In that time it was used as a seat, a footstool and even a coffee table before a representative from the Navy arrived to take it away yesterday.

Mr Gray had planned to convert it into a unique stove, or alternatively have it as a piece of artwork on display in his shop.

‘I’m disappointed, but not really surprised that they wanted it back,’ he said. ‘It was sad that they took it back, but as long as it doesn’t end up in the scrap heap, then I’m happy.

‘It was fun while it lasted – it was a great experience actually going out and finding the mine.

‘I actually received loads of requests from people offering to buy it from me, so clearly I’m not the only one who wanted to keep it.

‘Who knows, maybe another mine will wash up one day – I’m still hoping one day I’ll get my hands on one I can keep.

Coastguards told him the mine contained no explosives because it had originally been tethered to the sea bed as part of a Navy training exercise in Plymouth several months back.

The mine, which he says would once have had ‘INERT’ painted across it, had broken free from its tethering and is believed to have been swept around in the bay before settling on the rocks.

He said: ‘After I knew it was safe, I couldn’t wait to get my hands on it. I love beach-combing because of moments like that – it was such a thrilling moment when I saw it.

‘Even knowing it was safe, it was very exciting because of that characteristic striking look – everyone knows what a mine looks like.

‘All in all, this has just been a regular week for me really – every day we find weird and wonderful things.

‘In this trade, there’s always another weird salvage adventure around the corner – so I wonder what will pop up next.

‘But if you take one thing away, let it be this – don’t approach anything suspicious until you know exactly what it is.

‘Just because this one was inert, doesn’t mean they all are so don’t just go dragging random mines into your home.’ 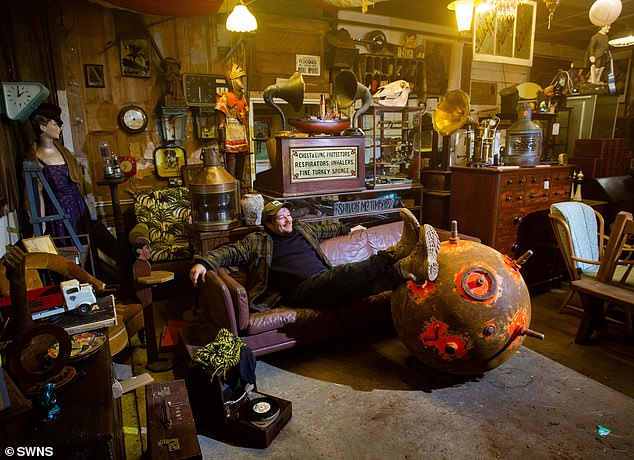 Mr Gray said he was able to proudly display the mine in his yard, and even in his home, for just under two weeks 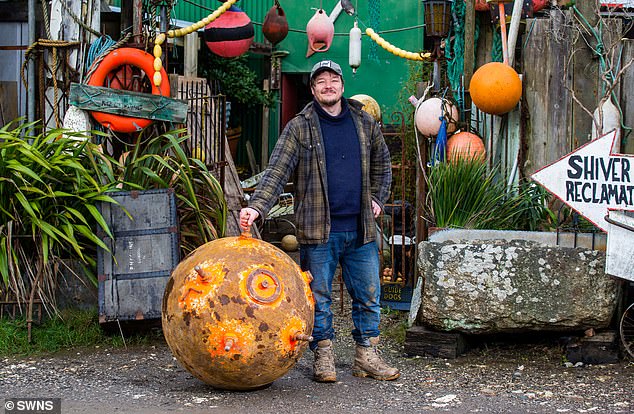 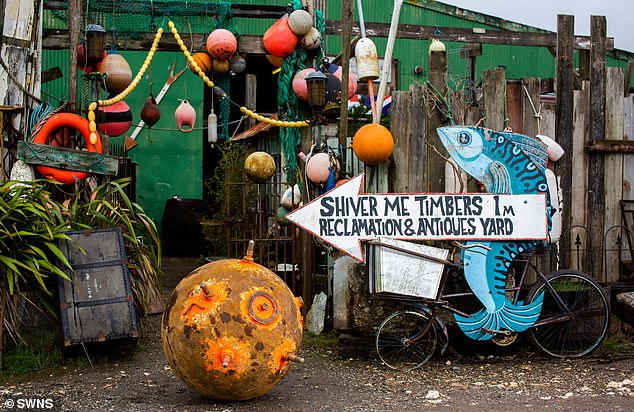 For two weeks, he used the mine to put his feet up on and as a coffee table 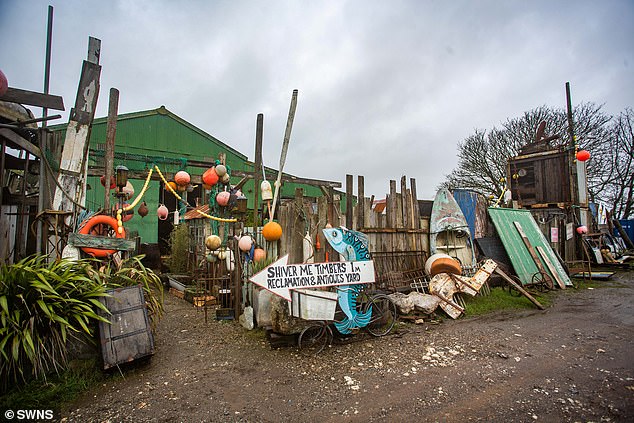 Shiver Me Timbers, near Penzance in Cornwall