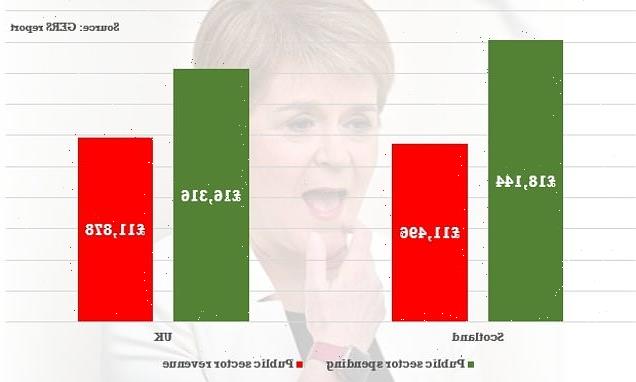 Public spending in Scotland was £1,828 PER PERSON higher than the UK average last year – up from £1,754 in 2019-20 – as Nicola Sturgeon dodges over how she would fill huge hole in finances after independence

Public spending in Scotland was £1,800 per person higher than the UK average last year, it was revealed today.

The extraordinary gulf between expenditure north of the border and the rest of the country was underlined in official figures.

The £1,828 difference was an increase from £1,754 in 2019-20. Meanwhile, tax revenues in Scotland were £382 per person lower than the UK average – with the gap stretching from £290 the previous year even accounting for North Sea oil income.

Tories said that gave a ‘Union dividend’ of £2,210 per person – demanding to know how Nicola Sturgeon would fill the fiscal black hole if she manages to fulfil her independence dream. 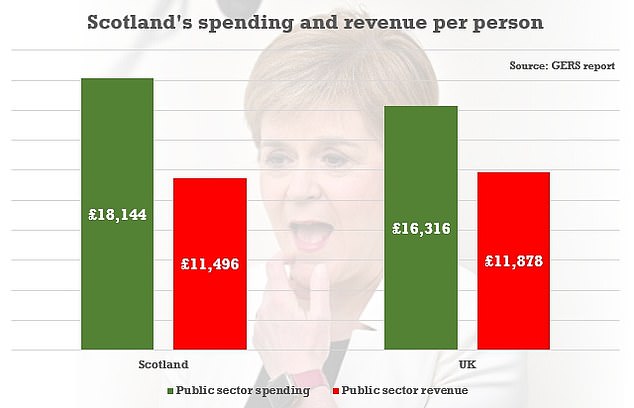 Scottish Conservative Murdo Fraser said the Government Expenditure & Revenue Scotland (GERS) figures ‘demonstrate the strength and security that we gain as part of the United Kingdom’.

‘In times of crisis, when a pandemic hits, Scottish jobs and public services are safer because we act together,’ he said.

‘The UK Government has delivered a war chest to fight Covid, back our NHS, and support Scotland’s economic recovery.’

The report shows Scotland’s deficit more than doubled to 22.4 per cent of GDP in 2020-21, the highest yearly figure since the Government’s annual accounts began two decades ago.

By contrast the UK as a whole had a deficit of 14.2 per cent.

Spending increased by 21 per cent during the year.

The report said: ‘This reflects the impact of Covid-19, which has seen falls in revenue, increased expenditure, and falls in GDP, all of which contribute to the increase in the deficit.’

Scotland’s 22.4 per cent deficit was more than double last year’s and is the largest since the Gers figures began recording the data in 1998.

As well as the impact of coronavirus, the fiscal position was also affected by declining activity in the North Sea and a fall in oil prices.

This led to a drop in North Sea GDP of 40 per cent.

Total public expenditure in Scotland during 2020/21, covering both Scottish and UK government spending and the rest of the public sector, was £99.2billion.

That was equivalent to 9.1  of total UK public sector expenditure.

Ms Sturgeon insisted Scotland’s current fiscal position was not any indication of what life would be like if the country was to become independent.

She said: ‘Almost every country has a deficit and deficits that have grown and become massive over the course of the pandemic because, rightly, governments have chosen to support the economy and to support individuals. 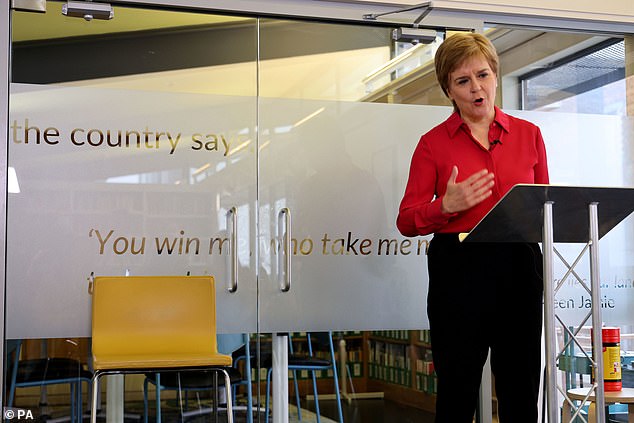 Ms Sturgeon, pictured unveiling Scotland’s new national poet in Edinburgh today, insisted the fiscal position was not any indication of what life would be like if the country was to become independent

‘When we see spending increases in Scotland, that’s a good thing because it shows that that support has been there and it’s been provided to people and public services across the country.

‘Having a deficit is not – self evidently – a barrier to any country in the world being independent.

‘The fiscal position of Scotland now is a feature of how we’re governed within the UK, it is not any indication of what life would be like in an independent Scotland and there is no reason whatsoever that Scotland as an independent country wouldn’t have the same ability to succeed as countries across the world – many of whom, of course, have far fewer resources, and attributes than Scotland.’

Scottish Secretary Alister Jack said: ‘These figures show how all of us in Scotland have benefitted from being part of a strong United Kingdom.

‘Public spending in Scotland reached nearly £100 billion as we tackled the pandemic and protected lives and livelihoods.

‘Unprecedented UK Government support has allowed us to treat patients, vaccinate people, protect a third of our workforce through furlough and issue crucial loans to more than 90,000 Scottish businesses.’

18/08/2021 World News Comments Off on Scots public spending is £1,828 PER PERSON higher than the UK average
Lifestyle