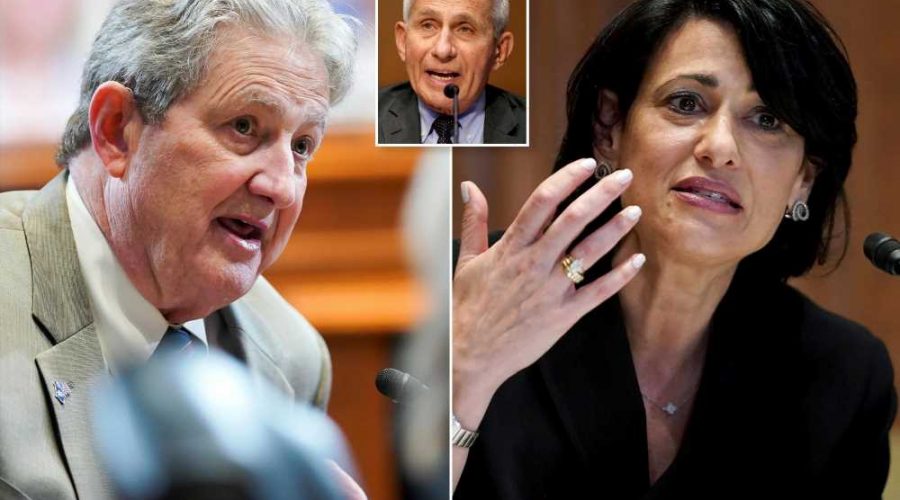 Republican Sen. John Kennedy pressed CDC Director Rochelle Walensky during a Senate hearing Wednesday to follow up on a tense exchange last week between Dr. Anthony Fauci and Sen. Rand Paul on funding for so-called “gain of function” research in the Chinese lab at the center of COVID-19’s origins.

Kennedy questioned Walensky about whether the US provided funding to the Wuhan lab for the controversial research, which focuses on making a virus more potent in the laboratory as a way to produce better vaccines against it.

“Not to my knowledge,” she said, adding that Fauci would be the best person to answer that question.

“I’m asking, with all due respect, I’m asking you to give us that information: Where throughout the world, including, but not limited to the United States of America, are we doing research on these viruses to make them contagious in order to study them, that’s what I mean by ‘gain of function,’” Kennedy said.

Walensky said she would have her staff look into it.

“You’re the head of the CDC, I bet you get your phone calls returned,” he retorted.

The Louisiana Republican also pressed Walensky to explain the Centers for Disease Control and Prevention guidelines released last week that have caused confusion about when masks are still required in certain situations.

He asked why, for example, he doesn’t have to wear a mask in the Senate because he’s vaccinated for coronavirus but must still wear one if he walks across the Capitol to the House of Representatives.

“Based on CDC recommendations, if I walk over to the House, are you recommending I wear a mask,” he asked Walensky.

“What’s different about the House?” he asked.

Walensky responded that she didn’t know the rate of vaccination for members of Congress off the “top of my head.”

A group of House Republicans ditched their masks on Tuesday to protest House Speaker Nancy Pelosi (D-Calif.) continuing the mask mandate despite the CDC’s updated guidelines that vaccinated people don’t need to wear masks inside in most situations.

At the same time, House Minority Leader Kevin McCarthy (R-Calif.) and the Republican Doctors Caucus are planning to introduce a resolution to ensure the House’s mask policies reflect the CDC’s guidelines.

Kennedy then asked Walensky about the mask policy on airplanes.

“There’s very little choice when you board an airplane as to who you will be sitting next to you, who’s around you, and also airplanes may be a place where we have more variants because of the travel from international places,” she said.

Kennedy then directed his questioning about the origin of the coronavirus that was first reported in December 2019 in the Chinese city of Wuhan.

“I don’t believe I’ve seen enough data, individual data, for me to be able to comment on that,” Walensky replied.

Kennedy asked her to weigh in on the possibilities.

Walensky said most infectious coronaviruses — like SARS or MERS — are transferred from animal to human, but acknowledged that it could also be developed in a lab.