French authorities have announced that seven people will be prosecuted for ‘conspiracy to commit a terrorist murder’ over the beheading of teacher Samuel Paty near Paris last week.

The history teacher was decapitated for showing cartoons of the Prophet Muhammad in a civics class discussion on free speech early this month.

He became the subject of an online hate campaign over his choice of lesson material – the same images which unleashed a bloody assault by Islamist gunmen on the offices of satirical magazine Charlie Hebdo five years ago.

The father of one of Paty’s pupils, who started the social media campaign even though his daughter was not in class when the cartoons were shown, is among those charged, anti-terror prosecutor Jean-Francois Ricard said.

He had exchanged messages with the killer, 18-year-old Chechnya-born Abdullakh Anzorov, via WhatsApp in the days leading up to the murder.

The pair stayed with Anzorov for more than two hours waiting for the 47-year-old father of one even after the killer told them he wanted to ‘humiliate and strike’ Paty over the Muhammad caricatures, seen as offensive by many Muslims.

Anzorov decapitated Paty with a knife and tweeted an image of the teacher’s severed head on Twitter before he was shot dead by police.

Earlier today, it was revealed that Anzorov had been in contact with a Russian-speaking jihadist in Syria ahead of the murder, a source close to the case said. 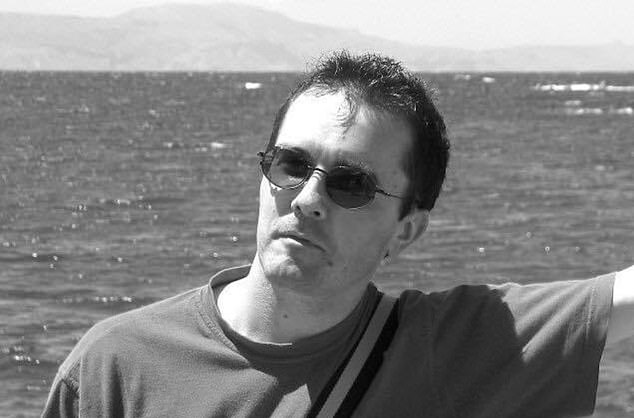 The fourth suspect charged in connection with Paty’s death is a known Islamist radical who helped the pupil’s father in his online campaign.

Interior Minister Gerald Darmanin accused the two men of having issued a ‘fatwa’ against Paty.

Three of Anzorov’s friends complete the suspect list, one of whom allegedly drove him to the scene of the crime while another accompanied him to purchase a weapon.

Police have carried out dozens of raids since the crime, while the government has ordered the six-month closure of a mosque outside Paris and dissolved the Sheikh Yassin Collective, a group they said supported Hamas.

The Palestinian militant group said on Wednesday it had ‘no links’ with the French organisation founded by Abdelhakim Sefrioui – the Islamist radical in custody over Paty’s murder.

The French government has earmarked for dissolution more than 50 other organisations it accuses of having links to radical Islam with French President Emmanuel Macron saying: ‘Our fellow citizens expect actions.’

The charges come after French President Emmanuel Macron last night paid his respects at the coffin of the teacher in the courtyard of the Sorbonne university. 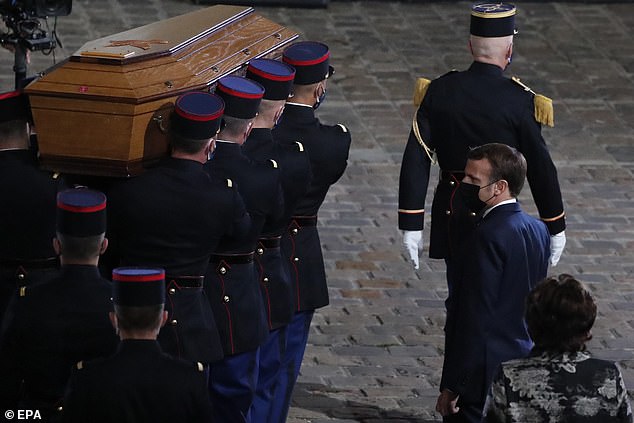 At the memorial service at The Sorbonne last night, Macron vowed that France ‘will not give up cartoons.’

The president said Paty was slain by ‘cowards’ for representing the secular, democratic values of the French Republic.

Paty’s coffin stood in the centre of the university courtyard, adorned with French flags, as pupils, a friend, and a fellow history teacher paid moving tributes to the 47-year-old father of one.

The ceremony started with the song ‘One’ by Irish rock band U2 played over loudspeakers at the Paty family’s request, and ended with applause.

Macron said Paty was killed ‘because he incarnated the Republic.’ 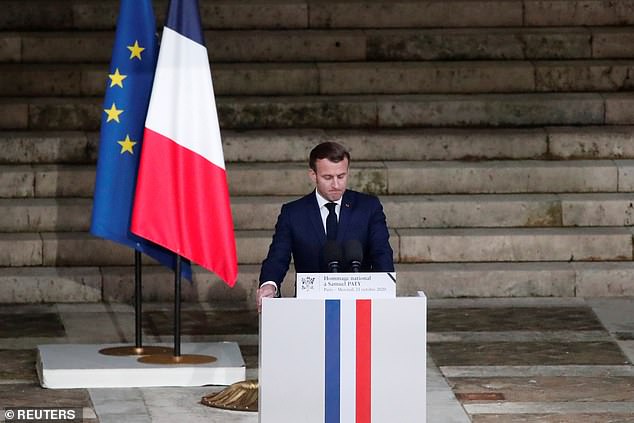 Macron delivered his speech in front of the coffin of slain teacher Samuel Paty during a national memorial event in Paris, France, yesterday 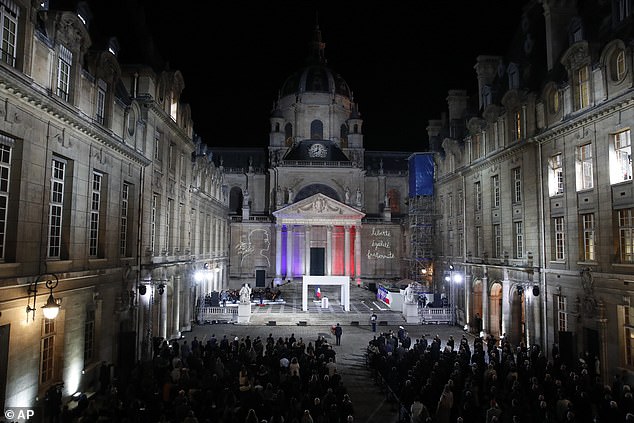 The president added: ‘He was killed because Islamists want our future,’ while vowing ‘they will never have it.’

At the event, Macron gave the country’s highest civilian award, the Legion of Honour, to Paty, who was attacked on his way home from the junior high school where he taught in the suburb of Conflans-Sainte-Honorine outside Paris.

Tributes were also held elsewhere in France last night, with the President of the Occitanie region Carole Delga organising the six front covers discussed by Paty in his classroom be projected on to the facade of two hotels.

The cartoons, which are being shown on the front of the Hotel de Region in Toulouse and Montpelier, will be broadcast for 10 seconds each on a loop for four hours.

The projections, which started at 5pm and end at 9pm, finish with an image of Paty and the French flag. 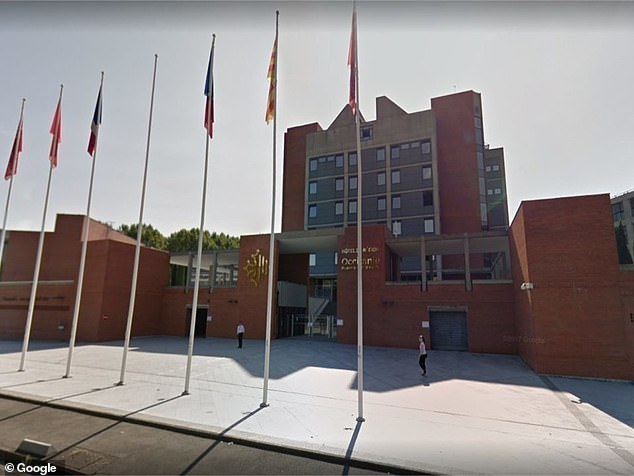 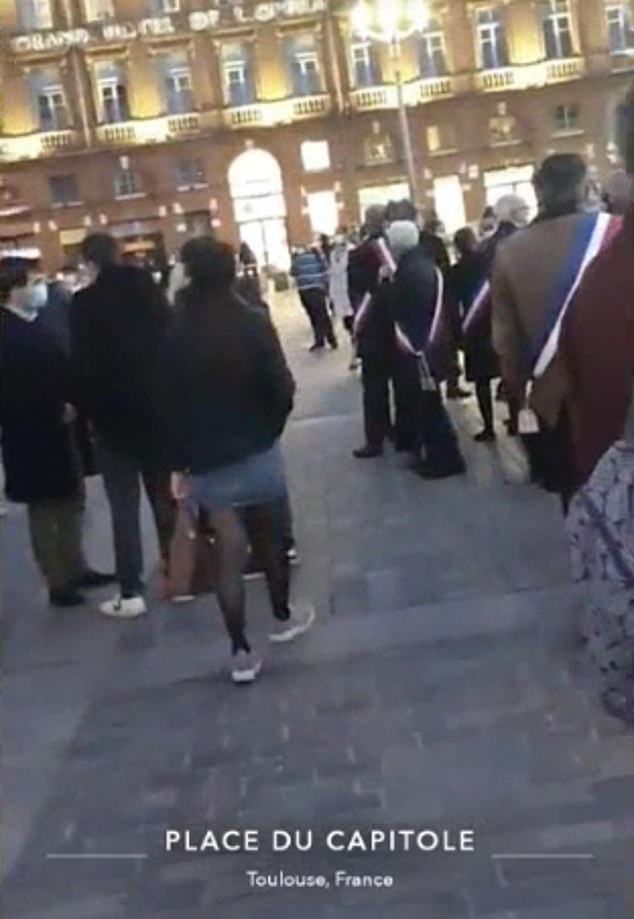 Paty’s beheading was the second knife attack in the name of avenging the Prophet Muhammad since the Charlie Hebdo trial started last month.

The killing has prompted an outpouring of emotion and solidarity in France, with tens of thousands taking part in rallies countrywide over the weekend.

Thousands more took part in a silent march in the teacher’s honour in Conflans-Sainte-Honorine on Tuesday.

France’s sports ministry said on Wednesday that participants in all professional sporting events this weekend – football, basketball, handball, rugby and ice hockey and volleyball – would observe a pre-match minute of silence for Paty, and wear black armbands for matches scheduled for next week.