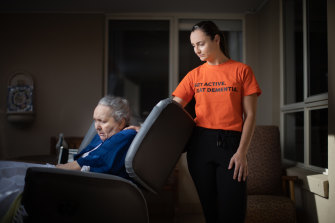 But there’s one hat she holds a little tighter than the rest, which is her ambassadorship for Dementia Australia, one she holds with poignant devotion to her own family. Her mother Ann is in her 11th year of younger onset dementia after been diagnosed at 52.

“Mum was diagnosed when I was 18 years old; they said she could live anywhere between five and 20 years,” Stevens recalled.

At the time, having just gone through a separation with their father, Nicola and her elder brother Aidan knew their mum wasn’t herself.

“We thought she was suffering from depression because we started seeing changes in her personality that weren’t characteristic at all.

“I was in the car with her one day and she just forgot the way home. If she was trying to cook dinner, she would often forget what order things go in, that was a really challenging thing for her to do.″⁣

“She would be halfway through a sentence and stop talking and say, ‘I can’t remember what I was going to say, I can’t find the words’.”

After countless tests, it was in Nicola’s final year of school that the word “dementia” appeared.

“The diagnosis came and within three years she had lost her driver’s licence, her independence, ability to cook, dress and clean herself and moved into a nursing home. It all happened very rapidly,” Stevens said.

Although the diagnosis brought some answers, an abundance of confronting questions came too.

“There are so many questions but there’s not always answers and when we talk about the brain, it’s so complex and a lot of the time doctors don’t actually know what’s going to happen, it’s different for everyone.”

The then-teenage siblings found themselves referring to their only lived experience of dementia in the family. “The only knowledge I had was that my nanna on Dad’s side had had dementia and forgotten Dad’s name.

“So, I knew it happened to old people and that Mum was going to forget my name.” 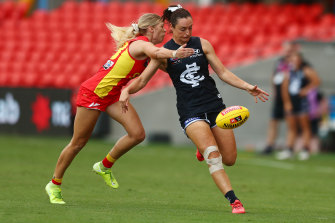 The Stevens family then embarked on the steep learning curve which an estimated 120,900 Victorian families have trodden, just this year.

Also known as early onset dementia, it encompasses under 65-year-olds and can descend on people as young as 30. That figure is estimated to rise to 301,000 people by 2058 without a significant medical breakthrough, hence Stevens’ allegiance.

“Early on when she was first diagnosed, I kept a lot to myself, I felt embarrassed that I was experiencing something that nobody else was and Mum wasn’t like everyone else’s Mum,” she said.

“Friends wouldn’t ask how Mum or I were because they were afraid to hear the response, so I started to access the family support services at Dementia Australia.”

With Ann now in the later stages of her battle, she has lost most speech and walking ability, and Stevens says one of the more important lessons has been acknowledging the day-by-day nature of their relationship.

“It looks different each time we visit, sometimes she’s too tired and not very alert, sometimes she opens her eyes and I talk to her but sometimes I just sit there and play her music.”

The nursing staff put the footy on every week when the Blues play, so that Ann can hold fort behind the goal posts.

“Even though Mum can’t talk now she can hear me. She knows my voice, so I’ll just keep going, I tell her everything.

“A few years ago I played one of her favourite INXS songs and she just started crying and then so did I. Not because she was upset but because she could actually remember something and that was really beautiful. I was crying because I was so happy she could feel something.“

Stevens will participate in Dementia Australia’s Melbourne Memory Walk & Jog this Sunday at Alexandra Gardens with a number of Carlton teammates.