This is the shocking moment a footballer brutally knocks out a referee with one punch after receiving a red card.

Violence erupted during the Kreisliga match in Munster, Germany between FSV Munster and TV Semd on Sunday.

Twenty-eight-year-old footballer Hayri G. received a second booking from referee Niels C., 22, in the 85th minute and was given his marching orders. 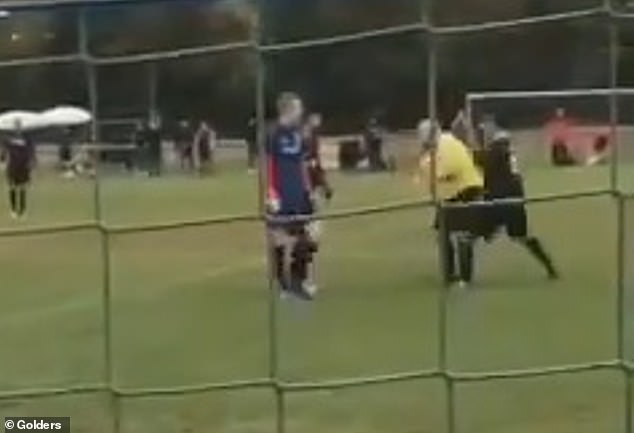 Twenty-eight-year-old footballer Hayri G. punched referee Niels C., 22, in the 85th minute after he was given a red card

Video shows the moment Niels C. takes out the red card and while still raising his hand high in the air is brutally punched in the face by the footballer.

After throwing the vicious punch Hayri G. is seen running from the scene as other players walk towards the referee.

He was transported to a hospital by helicopter where tests were conducted to see the extent of the injury. His specific injuries are unclear.

The score was 2-0 in favour of the visitors at the time however the match was suspended after the incident took place. 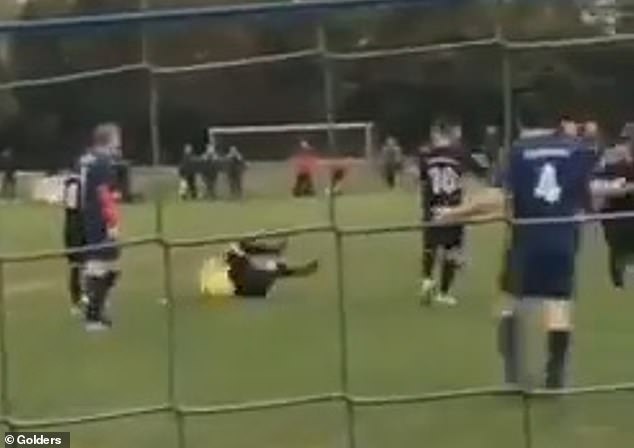 The referee falls to the ground following the punch. He was transported to a hospital by helicopter where tests were conducted to see the extent of the injury

He went on to say ‘this worries me a lot’ assuring he hopes an ‘exemplary punishment’ is given to the footballer.

No reports have been made of an open investigation or possible prison time.

The incident comes after the Berlin Football Federation cancelled all matches in the Berlin-Liga, the highest league of football exclusively in the German capital and sixth tier of German football.

The matches were cancelled after the league’s referees announced they were going on strike for the weekend due to a spike in violence against referees after 53 incidents have been reported this season alone.