Idyllic lanes that run through the exclusive Shropshire village of Badger are loved by cycling clubs, but one fed up local is laying them with booby traps to send ‘Lycra louts’ spinning

Little has changed in the village of Badger since medieval times; not fundamentally, anyway. The Domesday Book informs us, rather quaintly, that the hamlet, which straddles the Shropshire and South Staffordshire border, once consisted of ‘4 smallholders with 1 plough and woodland for fattening 30 pigs’.

The smallholdings may have been replaced by desirable cottages, making this one of the most exclusive postcodes in the Midlands, but the population is still only 140.

There are other quirky nods to Badger’s tranquil past. You will not find a shop, cafe or pub in the High Street, since ‘trading for profit’ is forbidden, apparently, under a rule set down by the original landowners.

It is also one of the few places in Britain where the bus stop has a thatched roof. 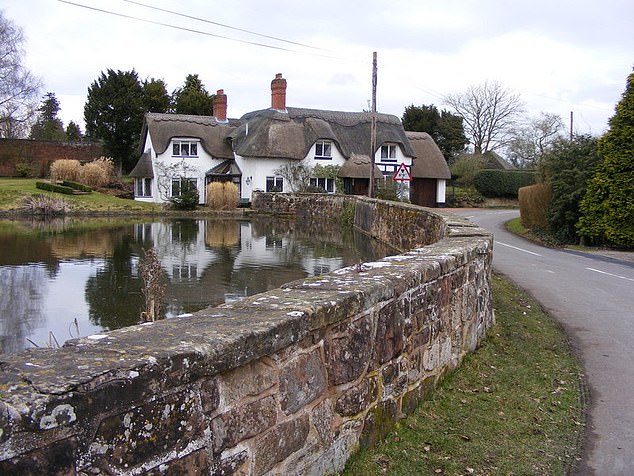 The smallholdings may have been replaced by desirable cottages, making this one of the most exclusive postcodes in the Midlands, but the population is still only 140

So Badger, situated in a deep wooded valley — Badger Dingle — with winding paths and fish ponds, surely ranks among the most peacefully idyllic locations in Britain.

Or at least, it did. Because the village has recently become the unlikely setting for the ‘Battle of Badger’.

Hostilities have centred on the single-track lane, just 12ft wide, which runs though Badger, where parish council chairman Terry Lipscombe, 73, made a sinister discovery. Every weekend for the past month he has found a ‘carpet’ of drawing pins strewn across the road surface.

‘On one occasion, I got down on my hands and knees with my wife and spent an hour picking them up,’ he explained.

The route, Mr Lipscombe knew at once, had been booby-trapped. The pins were the DIY equivalent of a police stinger device, a spiked strip used to shred the tyres of fleeing criminals.

The targets this time were cyclists — ‘Lycra louts’ in the eyes of many residents — who have been accused of clogging lanes by riding two and three abreast, pedalling dangerously fast and being abusive when challenged.

One villager, who asked not to be named, said: ‘[Last] Sunday was awful. One cyclist was really abusive and shouted and swore.’

Confrontations between cyclists and cars, of course, have become commonplace.

Perhaps clashes are inevitable given the soaring popularity of two wheels as a means of getting to work in traffic-clogged cities such as London, or simply as a way of keeping fit. Around 1.7 million of us use a bike ‘every day or nearly every day’, according to figures from Cycling UK.

In the Yorkshire Dales, riders who cycle in pelotons — pack formations — are said to have blocked roads by refusing to give way to motorists, flicked V-signs at drivers and sped through villages. Warning signs are being put up urging cyclists to ride in single file on narrow routes.

In Great Budworth, Cheshire, the parish council wrote to ten cycling clubs asking them to remind members to be more considerate after complaints of riders speeding, swearing and urinating in the streets.

But few spats have turned as nasty, and potentially dangerous, as the unfolding drama in ‘picture postcard’ Badger.

The guerilla tactics of the unknown saboteur — or saboteurs — are utterly at odds with the surroundings. The area was a haunt of P.G. Wodehouse, who spent his teenage years here after his father moved following his retirement from the Hong Kong civil service. Wodehouse said he found the area the perfect place to write.

One wonders what he would have made of the shenanigans which have been chronicled in the Badger Bulletin community pamphlet (a Wodehouse-esque title, if ever there was one) by retired solicitor Mr Lipscombe, chair of the parish council for the past 20 years. ‘This is disgraceful, if not criminal behaviour,’ he declared in the latest issue.

Speaking from his home yesterday, Mr Lipscombe warned: ‘It’s happened [leaving pins on the road] on three or four occasions and it must stop before someone is seriously injured.’

But he also acknowledged the frustration of residents. ‘Most cyclists are courteous and ride sensibly,’ he said. ‘But I have seen some ride far too fast, sometimes two or even three abreast. If a child were to step out in front of them, they would not be able to stop in time.’

Mr Lipscombe has taken it upon himself to flag down cyclists in recent weeks to alert them to the danger. He is convinced the pins are being scattered on Friday nights, on the eve of weekend rides by local clubs.

‘About three or four said they’d suffered punctures in the village. It’s not just cyclists who are being affected,’ he said. ‘My next-door neighbour counted 27 pins in her car tyres after one trip.’

Few residents would support such measures, at least not publicly, but feelings are running high in Badger. One resident had been on the receiving end of cycle road rage. 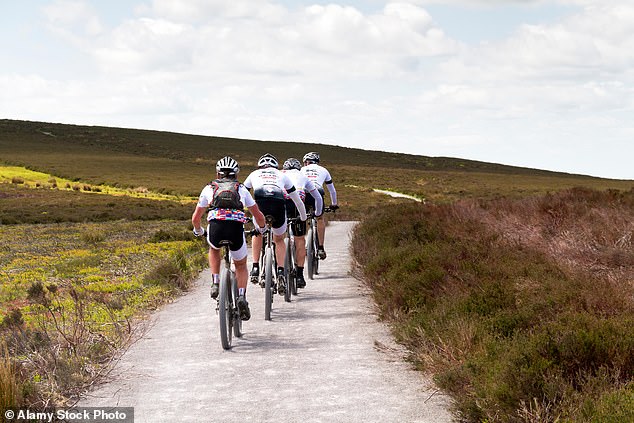 Mr Lipscombe has taken it upon himself to flag down cyclists in recent weeks to alert them to the danger. He is convinced the pins are being scattered on Friday nights, on the eve of weekend rides by local clubs

‘They seem to object to riding in single file,’ he said. ‘If you are in a car and politely ask them to move over, often you will get shouted at.

‘Our gripe is that they don’t have bells, and they come down into the village at about 20 or 30 miles per hour. Children and old people walk through the village. Sooner or later there will be an accident.

‘But putting tacks on the road is stupid. If I knew who was responsible, I would report them.’

Nick Jeggo is chairman of the local Newport Cycling Club. ‘Every village has an idiot, doesn’t it?’ is how he described the culprit or culprits.

‘Whoever he or she is, they are very irresponsible,’ he told us. ‘They are doing something very underhand and dangerous and I hope they are caught soon.’

As ever, there was another side of the story. ‘Badger is a lovely village,’ Mr Jeggo said. ‘It is on one of our favourite routes. But we are careful when we ride though places like this because the road is narrow.’

Newport Cycling Club members (all 289 of them) are regularly issued guidelines on safe cycling because the club ‘prides itself in putting the safety of both members and the public first’.

‘We have 90 junior members and it is important for us to make sure the youngsters are taught how to ride correctly on public roads and to be considerate to other road users,’ Mr Jeggo added.

It was a courtesy, he said, that was not always extended to his riders by drivers who often ‘cut us up on corners’.

‘There are some irresponsible motorists, just as there are irresponsible cyclists,’ Mr Jeggo acknowledged. But he was adamant the ‘drawing-pin’ tactic would not force the club to find alternative routes. ‘We’ll just have to be a bit more wary,’ he said.

Two cyclists who regularly ride through Badger are Luke Whitehouse, 29, and his partner Leanne Whale, 28, who regularly make the 35-mile round trip from their home near Dudley.

Mr Whitehouse, a customer service manager, said: ‘We often find tacks on the road. If you were going at speed and got a puncture, you would be straight off.

‘We would like to think people could find a way to talk about it rather than resort to these tactics. We don’t cause harm or damage. We’re just trying to keep fit. Would people rather have more cars or cyclists on our roads?’

The answer to that might depend on where you live.

‘We’ve considered putting in speed bumps in Badger, but regulations necessitate us then painting yellow lines, too, and that’s not what we want for the village,’ explained parish council chairman Mr Lipscombe.

So, for the moment, the Battle of Badger continues.