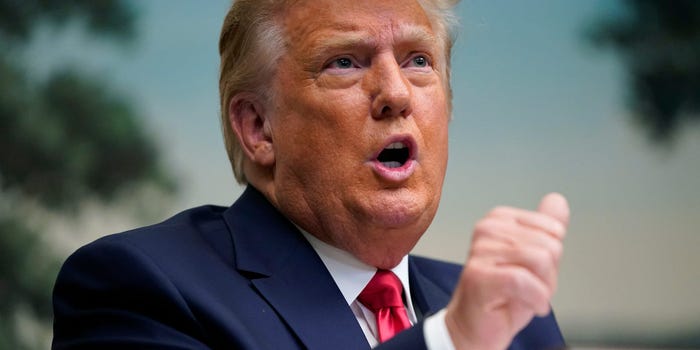 Bettors who wagered thousands of dollars that President Donald Trump would win the 2020 presidential election are now planning legal action against at least one online gambling site for their return, according to a report published by The Daily Beast.

European bettors told the publication that they bet money on a major online gambling service called Betfair in favor of Trump winning the 2020 election. Now they're calling out the company or filing suits because they still believe that Trump could be victorious, according to The Daily Beast.

However, earlier this week, president-elect Joe Biden solidified his win when he officially received more than 270 votes from the Electoral College defeating Trump. Biden's victory follows weeks of Trump and his associates' baseless claims and lawsuits calling voter fraud.

A British woman, identified as Helen, told The Daily Beast that she continued to bet more money as the baseless claims continued and as Betfair remained open for people to place bets.

"I watched the hearings of Rudy Giuliani and Jenna Ellis for ballot fraud, I listed [sic] to Sidney Powell and Lin Wood for the election fraud," Helen, who lost over an estimated $170,000 (€140,000), told The Daily Beast. "It looked very, very likely from the day of the election like it was fraud and as more info came out, I was more convinced of the win. Which is why I have such a large amount riding on it."

The company previously said last month following the election that they would "settle the markets when there certainty around which candidate has the most projected Electoral College votes," according to The Daily Beast.

As The Daily Beast reported, a United Kingdom bettor, Jordan Lea, invested approximately more than $67,000 (around £50,000) in support of Trump. Lea insisted the company adjusted its initial payout rules on November 27 from "majority" to "most projected" Electoral College votes. However, the outlet reported the company maintained its "most projected" rule prior to the date of Lea's accusations.

He is prepping for legal action with other Trump bettors against Betfair and other similar services, according to the Daily Beast.

"We have thousands of screenshots documenting the LIES we were told by the live chat assistants, as we have grouped together in various chatrooms and are pooling the evidence together to stake our claim," Lea told The Daily Beast.

Betfair did not immediately respond to Insider's request for comment.

17/12/2020 World News Comments Off on Some people lost more than $100,000 betting that Trump would win and are citing election conspiracy theories to sue the bookies
Lifestyle