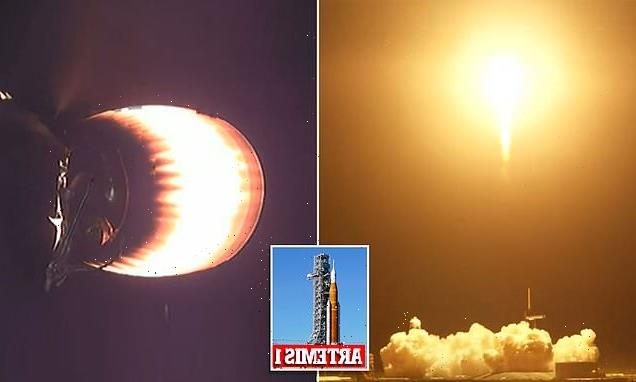 SpaceX launched yet another rocket into space – its 14th record-tying mission for the Falcon 9 first stage – at the Kennedy Space Center in Florida, just yards away from NASA’s troubled Artemis 1 spacecraft, which is unlikely to launch before October.

Saturday’s takeoff at around 9.20pm saw 34 Starlink internet satellites go into orbit ahead of another launch taking place on Sunday.

SpaceX’s liftoff in Cape Canaveral was the 60th launch for Starlink and the 40th orbital mission so far in 2022. CEO Elon Musk has said on multiple occasions that he aims for global cyberspace coverage with satellite personal communications service after 2023. 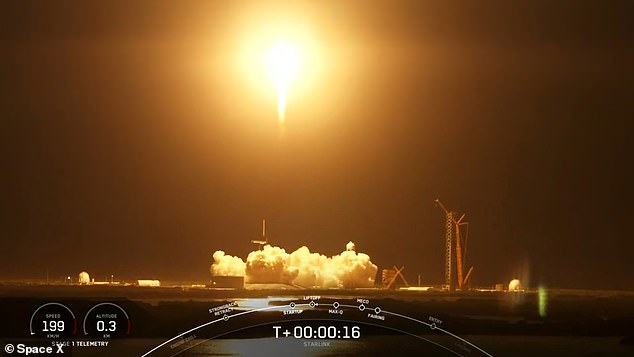 A SpaceX Falcon 9 rocket, carrying 34 Starlink satellites, launches from the Kennedy Space Center in Florida on Saturday. Space X used the same first stage booster for a record-breaking 14th time after it was used for previous Starlink-related and other missions set by SpaceX 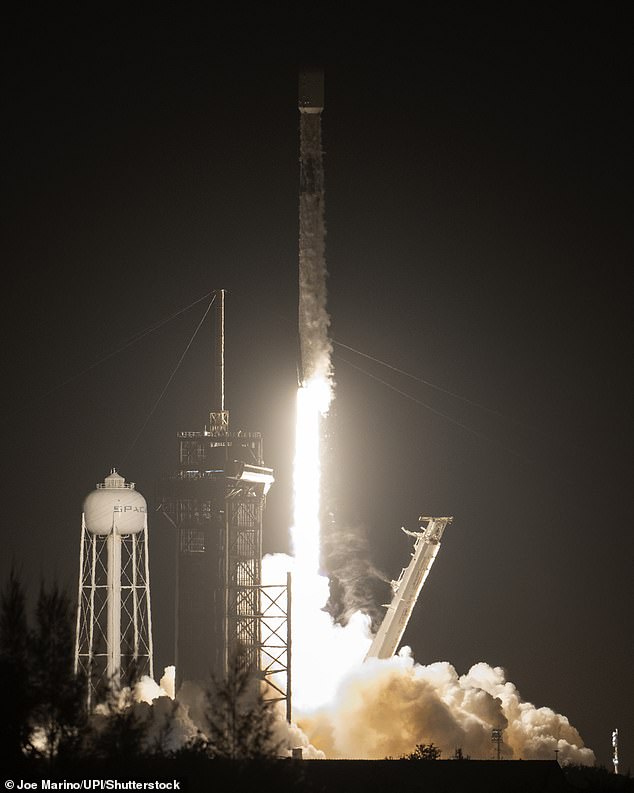 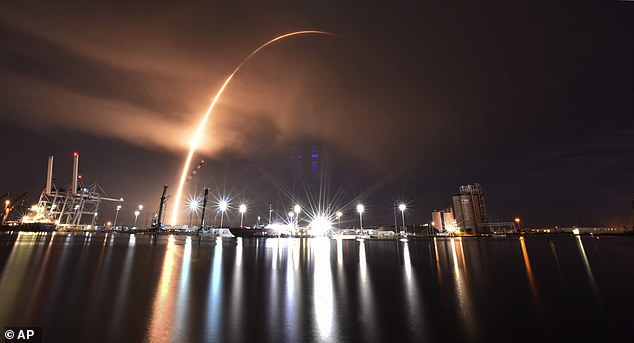 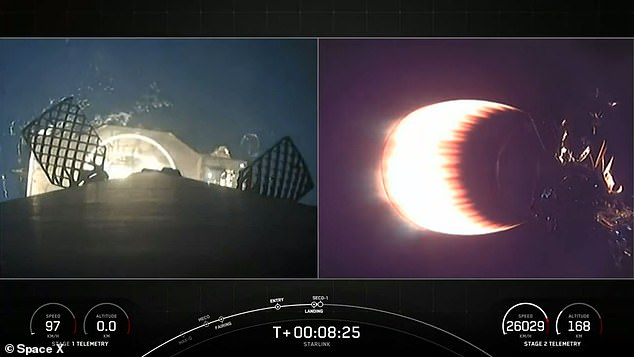 The first stage booster was previously used to support the launches of eight Starlink missions. Demo-2, ANASIS-II, CRS-21 Transporter 1, and Transporter 3 were also able to take flight with the same rocket engine.

Saturday’s blast-off was delayed 10 minutes due to local weather conditions in the Sunshine State deemed as a ‘no-go.’

However, that hold-up doesn’t compare to NASA’s ongoing issues with its Artemis 1 rocket. It was revealed this week that the federal space agency is currently replacing leaky seals in its moon rocket at the pad, which might set back the spacecraft’s tip- off into orbit for an additional six weeks.

When Artemis 1 is finally launched for the first time, it will be an unmanned flight, but the mission is set to pave the way for American astronauts’ return to the moon.

Managers said Thursday they will conduct another test after the repairs to ensure all hydrogen fuel leaks are plugged.

If that test goes well — and if the Space Force extends a flight safety waiver — then NASA could take another stab at launching the 322-foot rocket in late September. Otherwise, the rocket will return to the hangar for additional work, delaying liftoff until at least October.

October is now believed to be the most likely option.

The Space Launch System rocket — the most powerful ever built by NASA — holds a crew capsule with three test dummies. The space agency wants to send the capsule into lunar orbit on a trial run, before putting astronauts on the next flight, in 2024. That around-the-moon mission would pave the way for the first human moon landing in 50 years, currently scheduled for 2025.

‘We need to get the tanking test done and then we’ll have to look at what is the realism and schedule’ to make a launch attempt as early as September 23, Jim Free, who’s in charge of NASA’s exploration systems development, told The Associated Press. 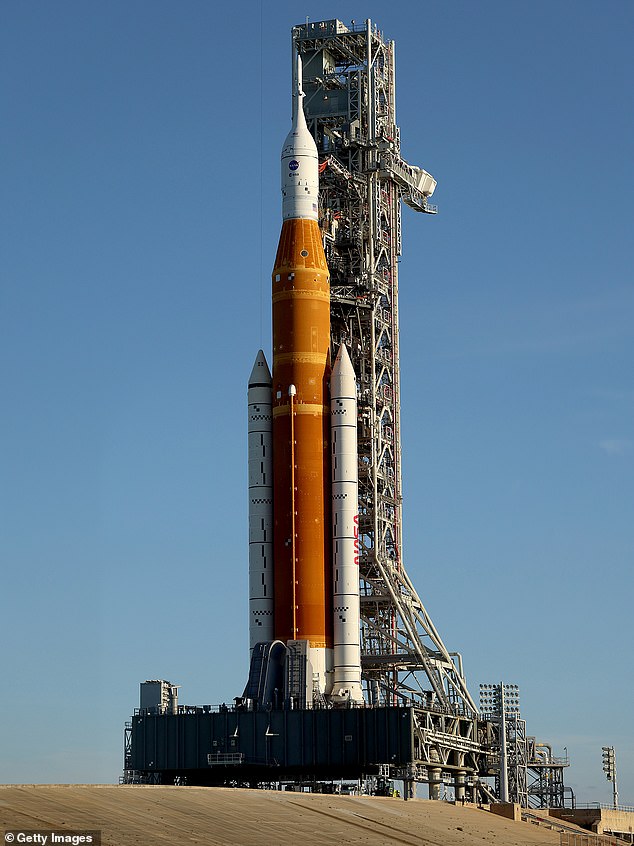 When NASA decided to stand down on its latest launch attempt last Saturday and roll the rocket back to the vehicle assembly building, it was because engineers couldn’t overcome a hydrogen fuel leak, which is a dangerous situation that could not be rectified by today, the final day of the current launch window 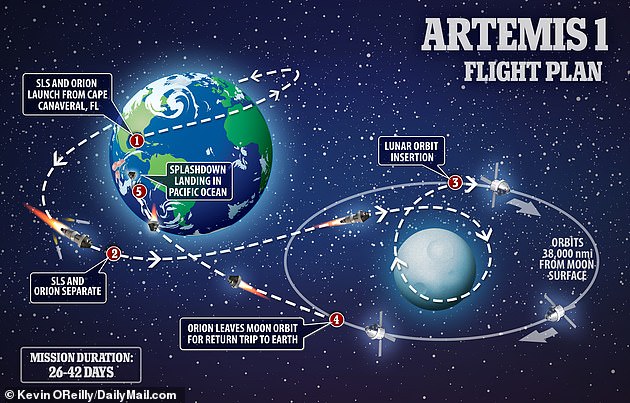 ‘We go when it’s ready,’ NASA administrator Bill Nelson said after the most recent scrubbed launch. ‘We don’t go until then, and especially now on a test flight, because we’re going to stress this and test it, and test that heat shield, and make sure it’s right before we put four humans up on the top of it’

To launch in late September, NASA needs the OK from the Space Force in Cape Canaveral, which oversees the rocket’s self-destruct system. Batteries are needed to activate the system if the rocket veers off course toward populated areas. These batteries must be retested periodically, and that can only be done in the hangar. The military would have to extend the certification of those batteries by an extra two weeks or more to avoid moving the rocket back to the hangar.

But every time the rocket moves between the hangar and launch pad adds ‘routine wear and tear, and I don’t want to do that’ unless necessary, said chief engineer John Blevins. There already have been three trips to the pad this year for practice countdowns and, most recently, the thwarted launch attempts of August 29 and Saturday.

Engineers are hopeful that replacing a pair of seals in the hydrogen fuel lines at the bottom of the rocket will take care of any lingering leaks.

As an extra precaution, the launch team plans ‘a kindler and gentler approach to tanking’ during the final phase of the countdown, slowing the flow of fuel at times to reduce stress on the seals, according to Mike Bolger, a program manager.

‘We’re optimistic that we can knock this problem flat,’ he told reporters.

Running years late and billions over budget, NASA’s new lunar exploration program is named Artemis after Apollo’s twin sister in Greek mythology. Twelve astronauts walked on the moon back in the late 1960s and early 1970s during NASA’s Apollo program.