Reality television star Spencer Matthews hid in the vault of a top London jewellers today while a moped gang carried out a terrifying raid on the floor above him.

The 30-year-old Made In Chelsea star revealed how The Hour House in Marylebone was ‘smashed to pieces’ while he took cover downstairs with two friends.

Dramatic video footage filmed from across the road on Duke Street showed six people racing off on three mopeds, with two on each, at about 10.30am today. 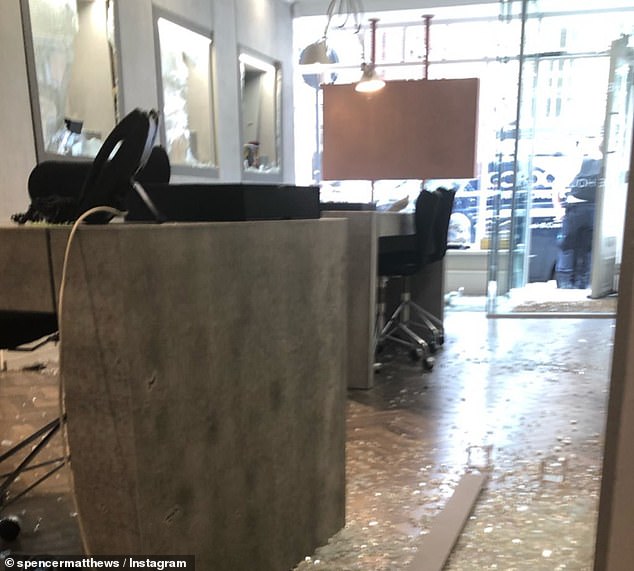 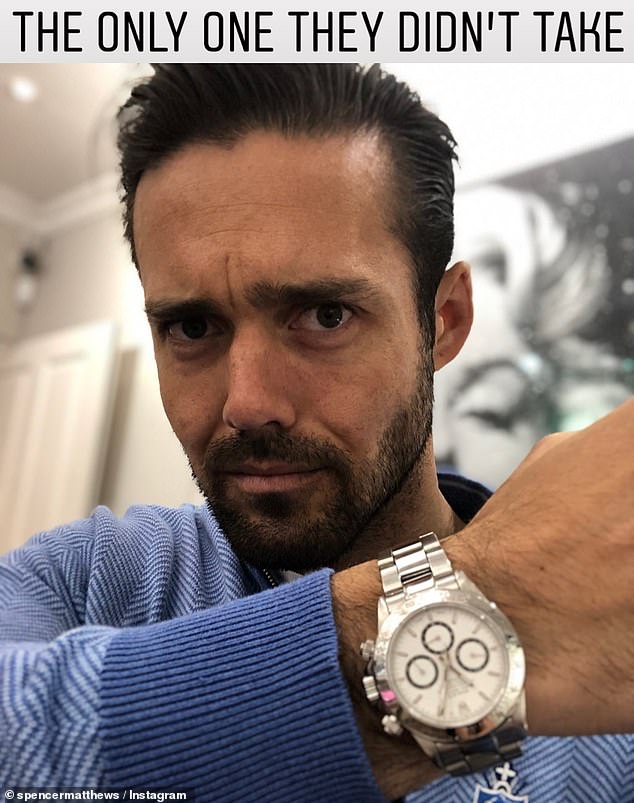 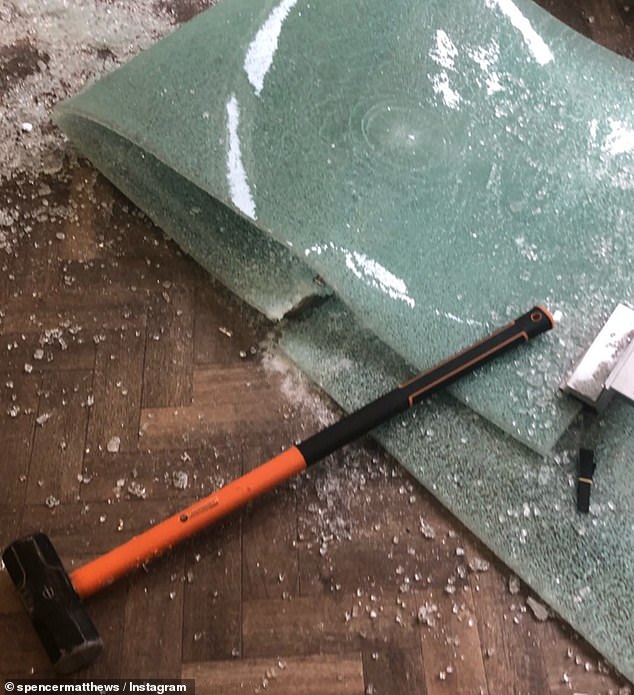 I’m A Celebrity star Matthews revealed on Instagram that he had been at the shop picking up a vintage watch and had presumed this was taken in the raid.

But when he went back upstairs following the raid, he found the watch ‘amongst all the rubble’, telling followers in a video: ‘If that’s not luck, I don’t know what is.’

Scotland Yard said it had sent specialist firearms officers to the scene, and a man in his 30s was treated for an eye injury after the shop window was smashed.

Footage on social media showed the smashed front window of The Hour House, near Oxford Street, with an abandoned moped lying on its side on the pavement.

A Metropolitan Police spokesman said: ‘Police are working at the scene of a smash and a grab at a store in Duke Street, Westminster. Officers were called at 10.32am. 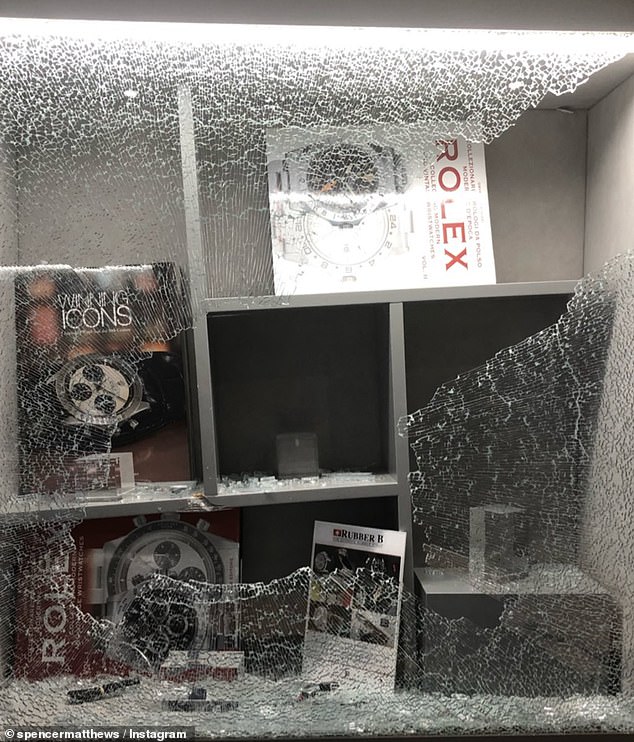 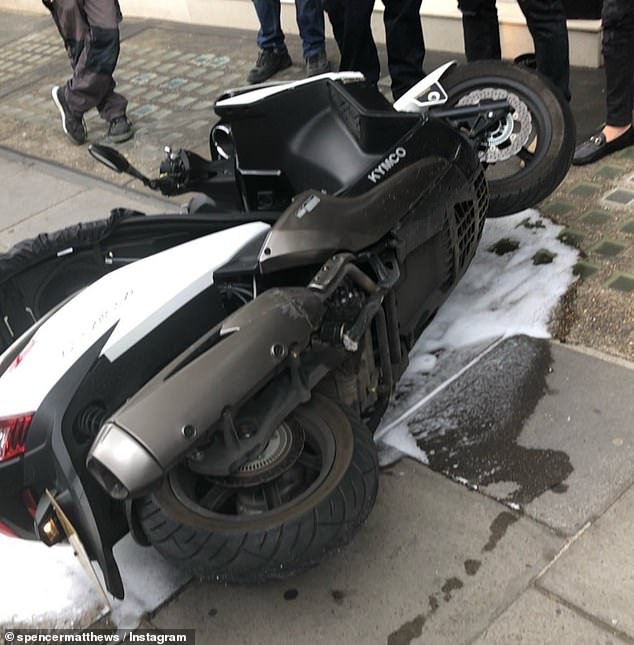 This moped was seen on the street following the raid which took place at 10.30am this morning 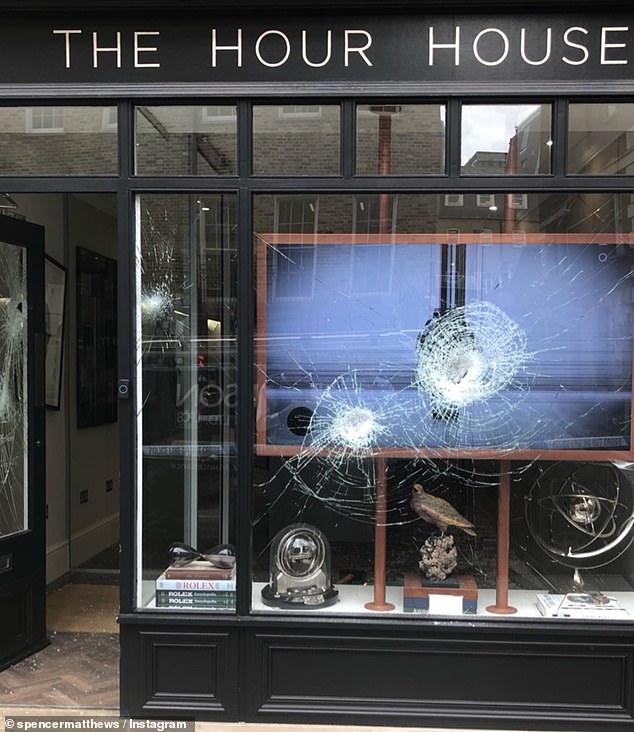 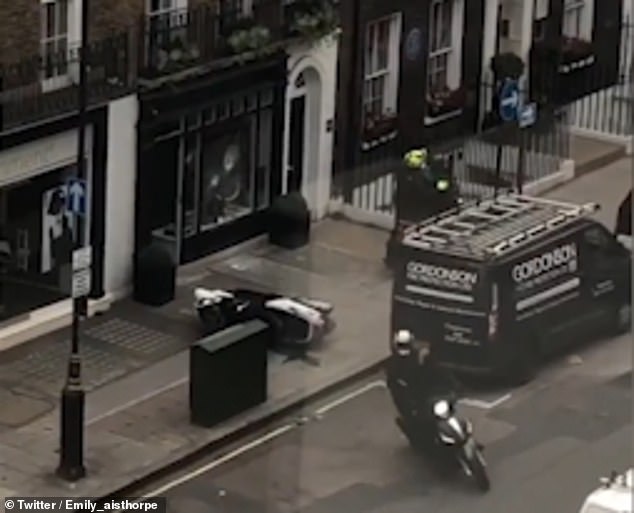 ‘A number of males armed with weapons are reported to have driven to the premises on mopeds and smashed a window before stealing goods and fleeing.

‘Officers attended, including specialist firearms colleagues. A man aged in his 30s has been treated for an eye injury sustained after the shop window was smashed.

‘At this stage there have been no arrests. Enquiries continue. Anyone who has information that could assist police is asked to call 101 ref CAD 2222/28 May.’

The Hour House, which is next to Selfridges, sells vintage watches and fine jewellery, and has a VIP lounge which can be be used for private viewings and watch events. 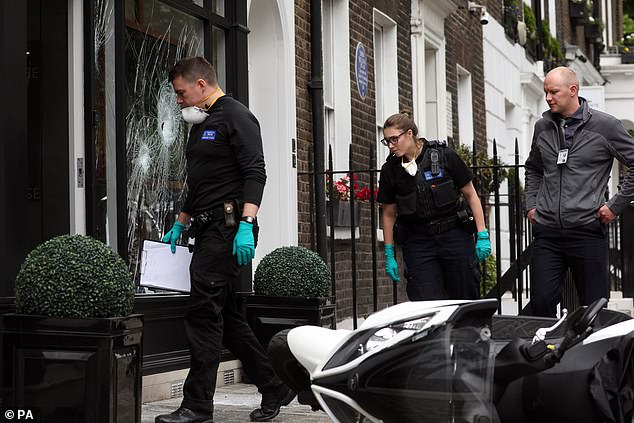 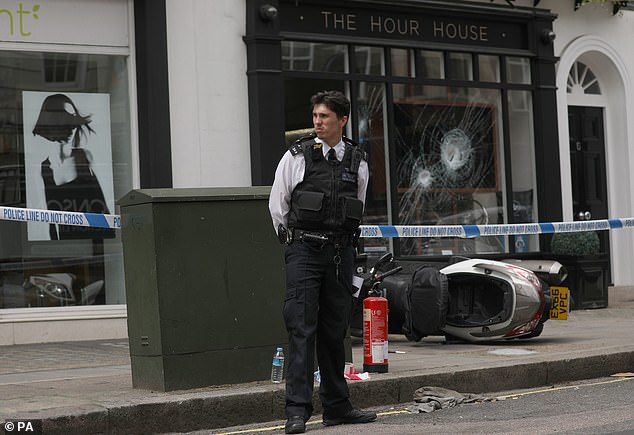 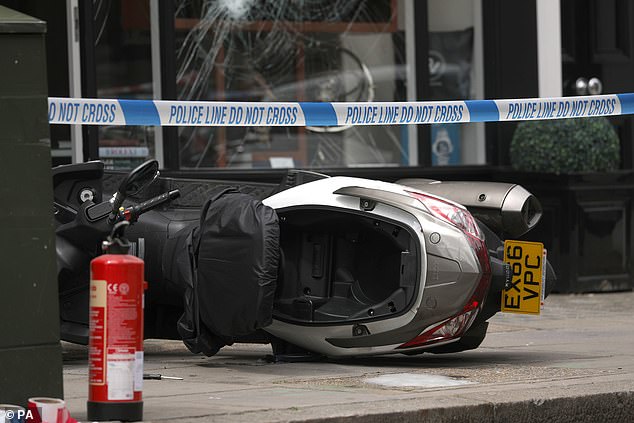 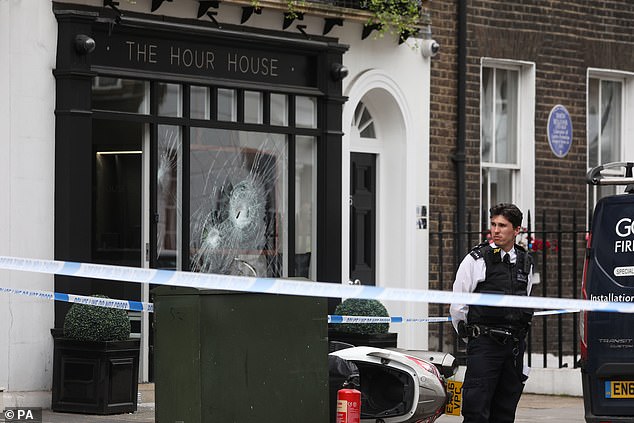 How police are battling a moped crime epidemic across Britain

Cities in Britain have faced a moped crime epidemic in recent years with an offence being committed as often as every hour by the thugs.

Scooter yobs are grabbing people’s phones, watches and bags, smashing their way into jewellery shops and stabbing anyone who gets in their way.

Some moped robbers have hit 30 victims in one hour alone, with those coming out of London Underground stations seen as an easy target.

Officers have also been injured by thieves riding directly into them.

Police chiefs had suspected thugs were emboldened by the mistaken belief that frontline officers were afraid to tackle them to avoid seriously injury.

But iIn an effort to cut down on the problem, police have been seen knocking moped muggers off their bikes in fresh tactics to stamp out the crimewave.

Specially trained drivers carry out ‘tactical contacts’, which involve tipping crooks off their scooters or dumping them on the bonnets of police cars.