It’s a cat-astrophe! Hilarious moment startled feline flicks its paws after getting tape stuck to them

This is the hilarious moment a cat gets its paws stuck on adhesive tape which was laid in front of an open door to stop the animal escaping.

The clip was posted online by Russian Instagram user Kesyacaat who said the door at her home had been recently painted and could not be closed, with the tape in place to stop the cats escaping.

Footage shows the cat approaching the door before it steps on tape and immediately recoils as it sticks to its paw. 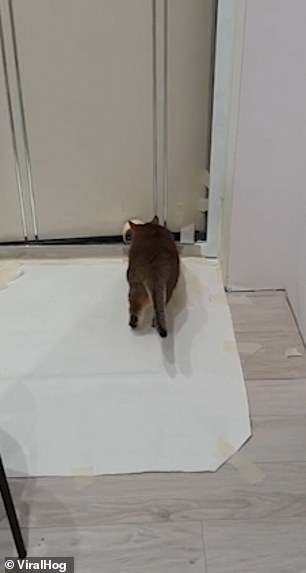 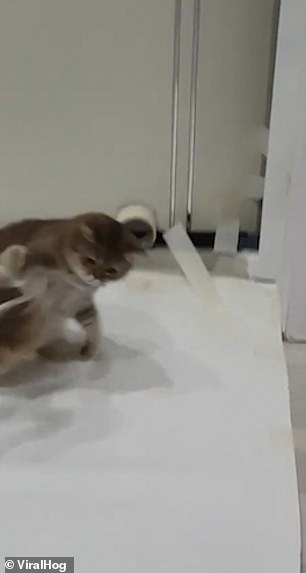 This is the hilarious moment a cat gets its paws stuck on adhesive tape which was laid in front of an open door to stop the animal escaping. When the cat steps on the tape, it immediately recoils as the adhesive paper sticks to its paws

The video starts with the cat walking up to the door, which has tape covering the frame and other pieces lying on the floor with the sticky side facing upwards.

Suddenly, the cat violently flicks its right paw as it steps on the tape, which sticks to it.

The cat then backs into the corner but this causes the tape to also stick to its back paws and the animal walks down the hallway while flicking its legs to try and dispel the tape. 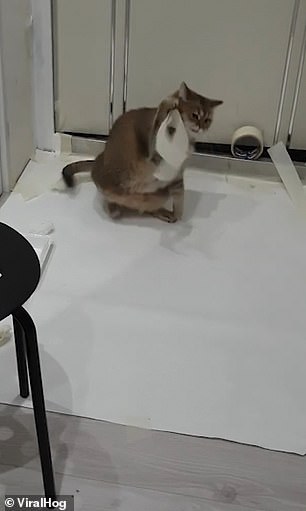 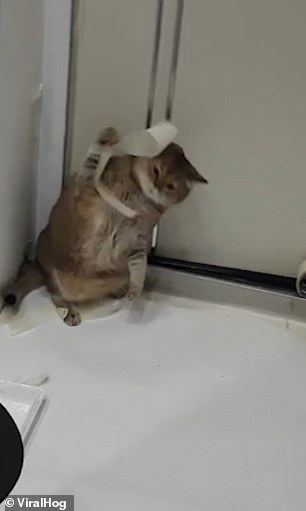 The animal flicks its paw violently to try to get the tape to come unstuck. It then backs into the corner but this leads to more tape getting stuck on its rear paws.

The cat’s owner follows it as it continues into a bedroom before walking further down the hallway, but the tape remains stuck to it.

It then runs underneath a bed and is followed by another of the woman’s cats, which appears to be watching its ordeal.

Eventually the cat succeeds in getting most of the tape off of its rear paws, although a small piece remains stuck. 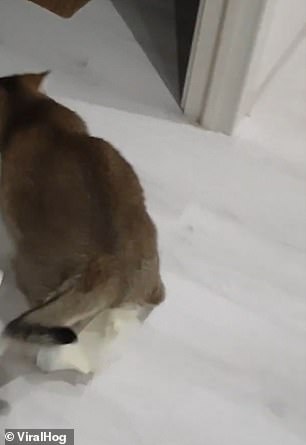 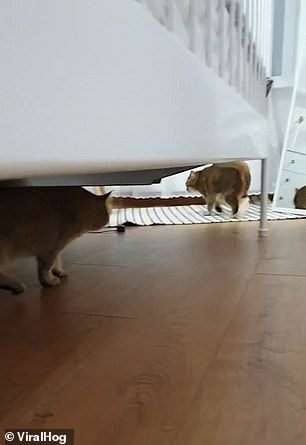 Its owner then follows it as it runs down the corridor and hilariously flicks its rear paws to try to dispel the tape. It then moves into another room and is able to get most of the tape off as another of the owner’s cats watches

The owner said: ‘we decided to paint the front door, the door could not be closed yet.

‘To avoid the cats escaping, my husband made traps with adhesive paper.

‘It wasn’t long before we caught our first escapee.’