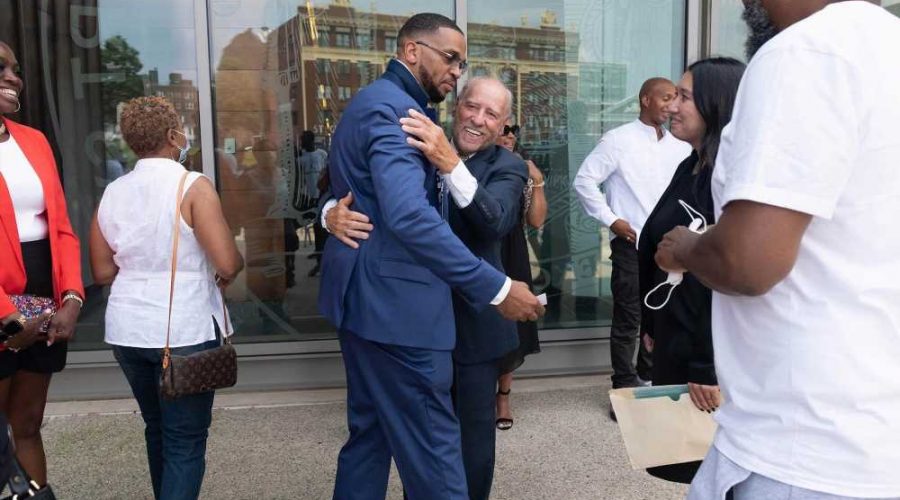 Idaho man gets life for 1996 rape, murder that sent innocent man to prison

Man imprisoned for 43 years over triple murder is innocent: prosecutors

A Staten Island man who spent 23 years behind bars was finally cleared Thursday after his botched murder conviction was tossed out.

Grant Williams, 50, turned and hugged his lawyers in court as State Supreme Court Justice Wayne Ozzi vacated his 1997 conviction, as supporters applauded in the courtroom.

He flashed a thumbs-up as he left the room.

“Nothing I can say can undo 25 years of that nightmare,” Ozzi told him. “I hope it is a bright future for you.”

Williams was charged in the April 5, 1996, shooting death of Shdell Lewis outside a Staten Island housing project and found guilty by a jury in November 1997, prosecutors said. He was sentenced to 25 years to life in prison.

But the case was based solely on the testimony of one witness and an NYPD cop — and ignored other witnesses that gave Williams an alibi the night of the shooting.

“Given the overwhelming amount of exculpatory evidence presented for the first time in this review, as well as a totality of the investigative circumstances in this case, which in several instances defy what we now accept as best practices, we now believe Mr. Williams to actually be innocent and conclude that our justice system failed him,” Staten Island DA Michael McMahon said in a statement Thursday.

The mishandling of the case began about a half-hour after the shooting when a 17-year-old witness at the Stapleton public housing complex told cops it likely involved a turf war and a gangbanger nicknamed “Boo Boo.”

Williams, who was then on parole, was found to have the same nickname — although investigators later reviewing the case questioned the teen’s claim.

The real gunman, who eluded police at the scene, was also described by cops as a stocky black man about 5-foot-5 — in stark contrast to Williams, who is a 6-foot-2 light-skinned black man and “very thin,” prosecutors said.

Police also spoke to a “family friend” who was with Lewis when he was shot and told cops that Williams was not the shooter — a detail that never surfaced at trial.

Williams was eventually tracked down in Virginia and extradited to New York in October 1996, with his murder trial beginning in November 1997.

After his arrest, Williams was placed in a lineup that only included the two witnesses who had identified him from a photo array — including one of the cops at the scene who gave the initial description of the shooter.

After the case went to the jury, the panel sent the judge a note saying they were “hopelessly deadlocked,” but the judge sent the jurors back. They returned a guilty verdict in less than an hour, the DA’s office said.

In his appeal in 2000, Williams asked that a “WuTang” cap dropped by the gunman at the scene be tested for DNA — but police had already destroyed the cap without it being tested.

Williams’ lawyers also uncovered additional evidence and witnesses, including several who said he was at a recording studio at the time of the shooting.

The lawyers’ evidence prompted prosecutors to review the conviction, and with evidence mounting against his involvement, Williams was paroled in December 2019.

Williams was cleared by the DA’s Conviction Integrity Review Unit and is the first wrongful conviction case to be overturned on Staten Island, prosecutors said Thursday.