BRIT tourists are being warned that they could come home from their summer holiday with more than a tacky souvenir or a dodgy tattoo.

New research has revealed the hot spots for sexually transmitted infections across Europe in the last five years. 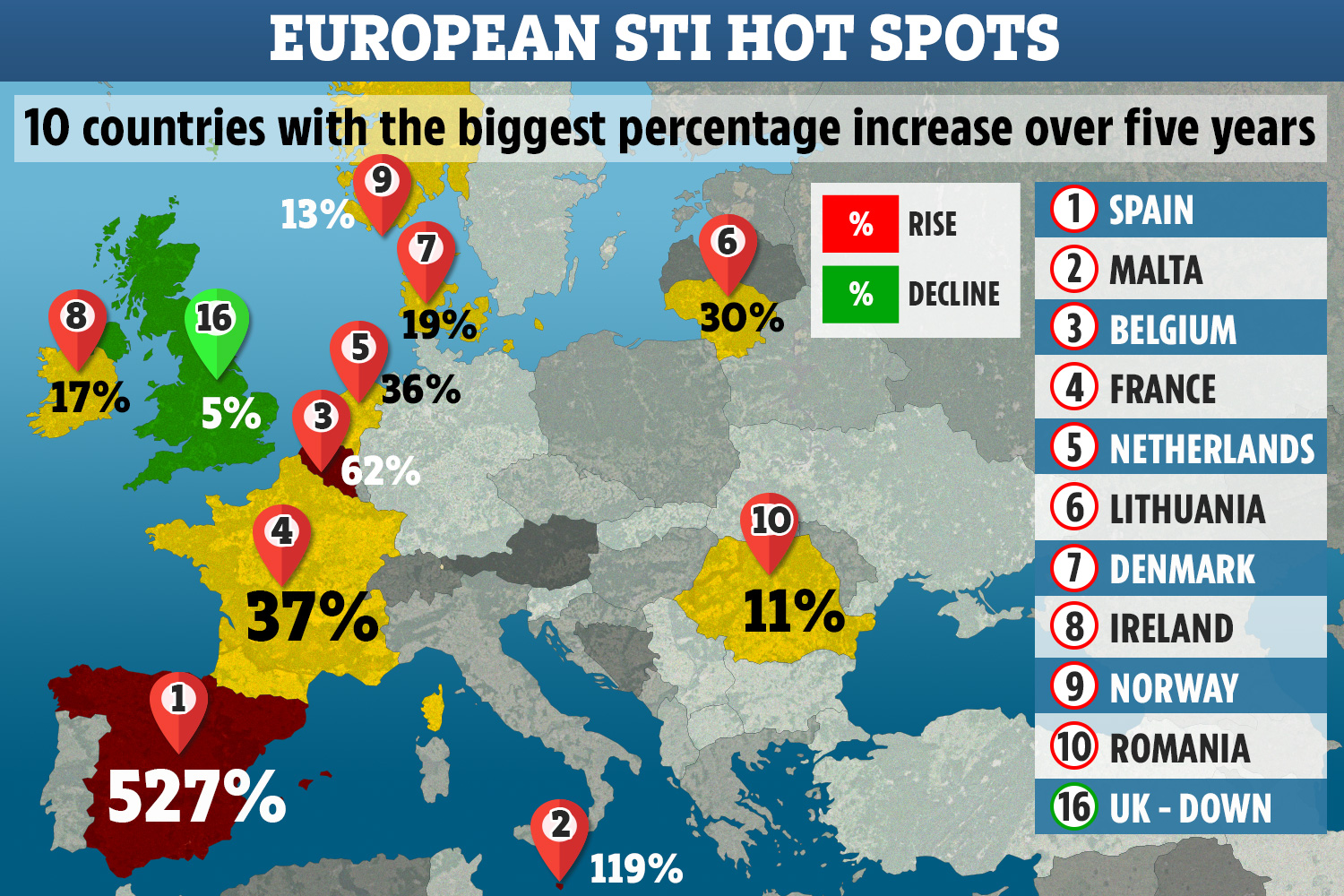 And it's bad news if you're heading to Spain where diagnosed cases of chlamydia have rocketed by 527 per cent.

The study by online pharmacy Treated.com also revealed that Malta and Belgium were risky destinations for unprotected sex with 119 per cent and 62 per cent increases of the disease respectively.

And while chlamydia is the most common STI in the UK, cases have actually dropped by five per cent.

There most commonly diagnosed infection across Europe over the five year period was gonorrhoea.

Figures released earlier this year showed cases went up by 17 per cent in 2017 – with 240 new cases diagnosed every day.

The increase follows an overall trend over the last decade in which 20 of the 28 EU countries consistently reported an increase in gonorrhoea cases.

Since 2008, France and Portugal experienced a six-fold increase, while Denmark and Ireland now record more than three times as many confirmed cases.

More than 44,500 Brits were diagnosed with the infection – also known as "the clap" – in 2017, while 78million are infected globally every year, according to the World Health Organisation.

The latest research also found that for 60 per cent of European countries you can legally keep your STI a secret.

The only EU countries where you must disclose your STI status to your partner are Sweden, Hungary, Norway, Italy, Finland, Latvia, Romania, Lithuania, Bulgaria, Estonia, Malta, Iceland.

Those countries have more than double the amount of diagnosed cases of chlamydia, syphilis and gonorrhoea, than those with guidelines in place.

Bringing up that conversation with a partner isn't always easy but doctors say it's one that you must have.

"They’ll likely be advised to have a full STI screen, but they’ll be asked when getting tested if they’ve had any recent partners with an infection and what these infections were; so giving them this information is a standard courtesy.

"It’ll also be useful for them to know what the doctor has recommended (be it treatment, abstaining from sexual relations for a certain period or getting tested again in a few weeks), so they know what to expect if they test positive too.

“Ask them if they know where they can get tested. If they don’t, it might be helpful to them to let them know where you got your test result, and if you’re aware of any, what local services are nearby.”

Using the results of the study, Treated.com have developed an interactive tool to display the STI partner notification guidelines throughout the EU and across the US.